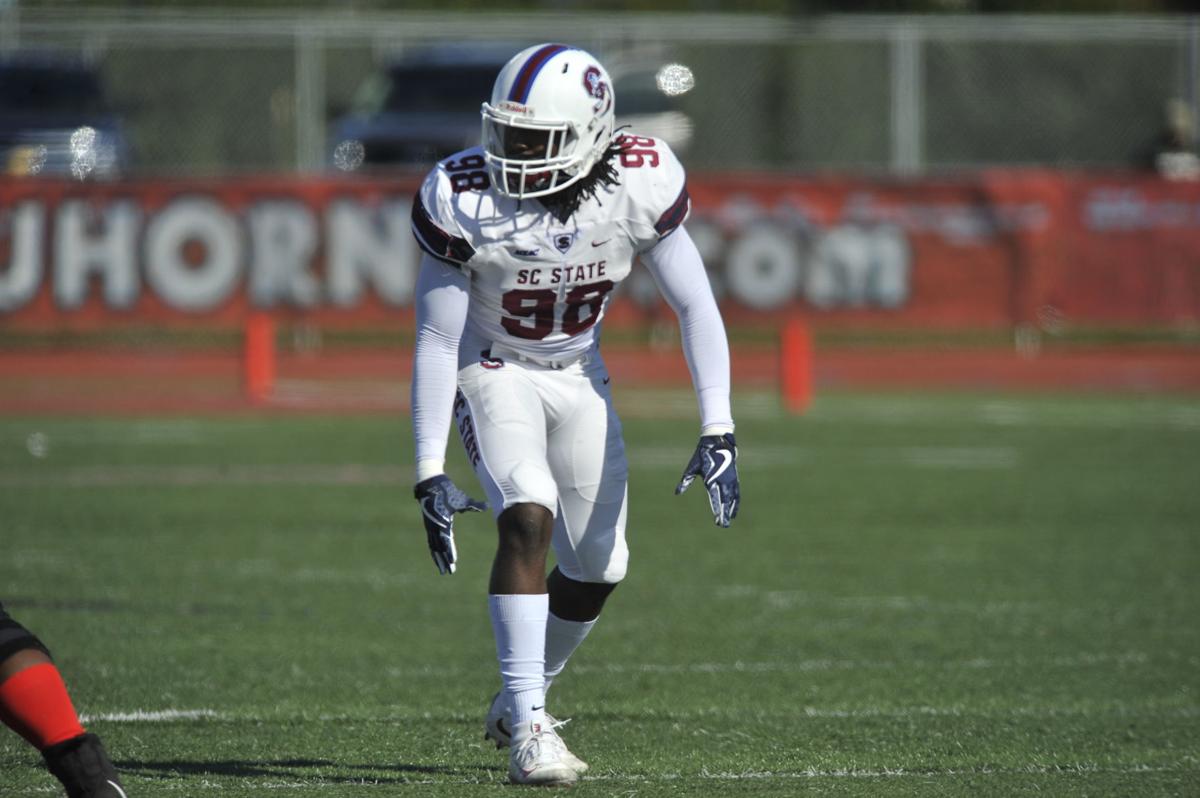 Emerald grad Bruce Johnson lines up for a play during a game with South Carolina State. 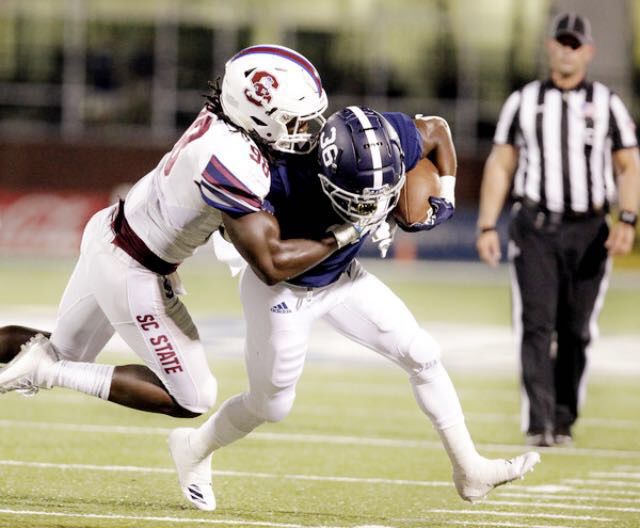 Bruce Johnson makes a tackle during a game with South Carolina State. 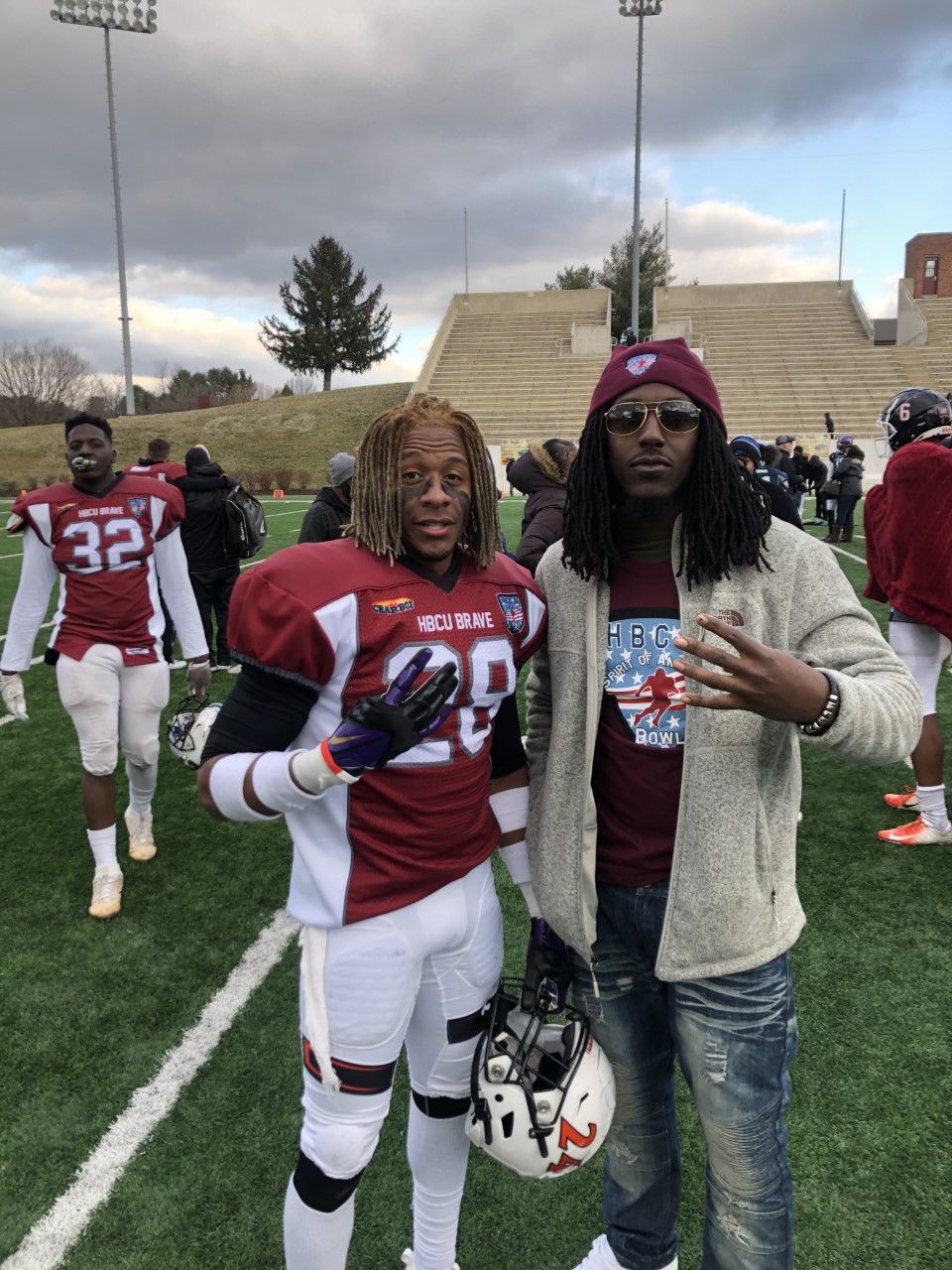 Bruce Johnson, right, and David Johnson, left, pose for a photo after the HBCU Spirit of America Bowl in Roanoke, Virginia. 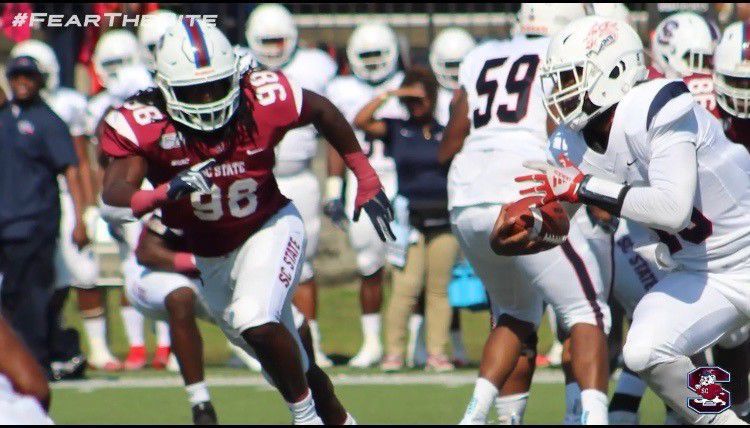 South Carolina State defensive end Bruce Johnson takes off from the line of scrimmage looking to make a tackle during a game last season.

Emerald grad Bruce Johnson lines up for a play during a game with South Carolina State.

Bruce Johnson makes a tackle during a game with South Carolina State.

Bruce Johnson, right, and David Johnson, left, pose for a photo after the HBCU Spirit of America Bowl in Roanoke, Virginia.

South Carolina State defensive end Bruce Johnson takes off from the line of scrimmage looking to make a tackle during a game last season.

But these days, Johnson is a different person. He loves early morning workouts, gripping the cold steel and taking a small step each day toward his dream.

These days, that dream is changing.

After four years at South Carolina State, Johnson transformed from a wiry pass rusher to a versatile defensive end. But his football career is only part of it.

Johnson’s world has expanded, he says. He feels he “beat the odds” in life, not just football. Five years ago, Bruce was a confused kid who hung out with the wrong people.

Now, he and his brother are the first people in their family to graduate with a four-year degree. Johnson has a chance at the NFL and a passion for helping kids who grew up like him.

“That’s what I look up to the most is giving back,” Johnson said. “It’s not about how much money you put in your pocket. You serve the people through the will of God.”

Each time Johnson starts to explain the difficulties he faced in life, he’s quick to back it up with a reminder that others have it much worse.

He feels he was an underrated high school recruit. But, he quickly retracted, “A lot of kids can’t say that. A lot of kids don’t get one full ride and some kids get partial scholarships.”

When he delves into the trouble he could have faced in his teens, he does the same thing. “You can be wrong,” he said. “If you mess up, you can make it right. It’s not about, if you’re wrong, you’re going to stay wrong for the rest of your life.”

His only college football offer was extended to him the same day a South Carolina State coach came to Emerald High to meet him for the first time.

Back at Emerald, Johnson’s coach, Tim McMahon, remembers him as a raw talent.

For any football skills he may have lacked in his teenage years, Bruce made up for it with a fierce competitive edge that leads McMahon to call him one of his favorite players of all time.

“If there is a scoreboard involved and there is a competition, I would not count Bruce out,” McMahon said with a laugh.

Throughout high school, Bruce drove across town after school each day to drop his brother, David Johnson, off at Next Level Fitness, a startup athletic training gym founded by Jamar “Hoot” Crawford, who focuses on giving young people in Greenwood guidance, mentorship and training in sports and life.

David, who started at Next Level in the middle of high school, might as well have been addicted to working out with Hoot.

Working out at the gym, he saw his body develop and it later helped him reach the Division II level with Tusculum, where David played cornerback before graduating in December 2019.

But Bruce? Not so much.

“David, he used to say, ‘Man, I don’t understand why my brother won’t come,’” Crawford said.

Each day, however, Bruce would hang around a few minutes longer before taking off in his car. Those few minutes eventually became enough to get him in the gym for good.

“And each day it was, one minute, five minutes, ten minutes,” Crawford said. “He came in there one day and walked in there with a big chest like, ‘I’m finna work today.’”

Bruce hadn’t started training with Crawford until the summer after his senior year. He had been occupied with playing basketball for the Vikings, but had yet to become quite as serious as David about training for college football.

Over time, Crawford found a way to change Bruce’s attitude about lifting weights and performance training. He helped Bruce find a drive to help others, too.

“I never understood why people did things like put in community service hours to get nothing out of it,” Bruce said. “Hoot put me on that type of stuff. He was like, ‘If you really want to be a better person, build your character, do stuff without expecting return.’”

For David, Crawford’s guidance provided a shield from bad influences through high school and today.

“I can honestly say this kind of saved me from a lot, because it gives me something to look forward to when coming home from college, rather than getting into all kinds of trouble,” David said. “I was always a good kid, but this helped me keep my head on straight.”

Crawford is often asked why he hasn’t taken a job offer with an organization that could pay him more or offer him more time away from the gym.

“Kids like that, they show me that they’re willing to do what it takes,” Crawford said. “And when I see that, I know my purpose. I know that I’ve got to keep going, because if it’s one, you can save one, that’s what matters. That’s your purpose.”

Early in high school, Bruce could have ended up in a much different place than where he is now.

Crawford said he had an “attitude that he didn’t care about nothing.” Crawford was worried about Bruce’s friends, who seemed to be steering him on a bad path.

“He was just lost. He didn’t believe in nothing,” Crawford said.

Bruce says he “buried that,” though he sees the risk he had of hitting the same potholes many youth in Greenwood do. He’s disheartened when he comes home from college to a Greenwood stricken by violence.

“I hung around guys that were still in the wrong way,” Bruce said. “I just never lost focus on what I wanted to do, from parenting and being disciplined. Now that I lived the dream of playing college football, I’m still chasing another one. I just can’t let it get away from me.”

Now, Bruce has some solid options for his future. He has a backup plan to football, and one he holds dear to his heart after his experiences as a child.

Bruce has a job offer with AMI Kids in Florida. He will work with incarcerated or at-risk youth. The job pairs well with his criminal justice degree, and Bruce plans to pursue his master’s degree and a career in forensics.

Bruce spent time with AMI in Union County, learning about the company and working with children. That avenue, much like football, has channeled a new passion.

“He basically wants to do what I do when his career is over, because he knows he can reach kids like I reach them,” Crawford said. “You just save one, and look at his success.”

At Emerald, McMahon takes pride in his track record with elevating players to college football. He takes as much pride in seeing players come from difficult starting points in life to pursue better lives for themselves and others.

Bruce is in good company at South Carolina State, as far as his potential path to NFL goes. He played in college with Darius Leonard, who made the Pro Bowl last season as a linebacker with the Indianapolis Colts. The Bulldogs have one NFL Combine invitee this offseason, and Bruce will join a few more NFL hopefuls at his pro day this spring.

Bruce is close friends with Leonard. His relationship with Leonard brings back memories of Leonard’s ruthless work ethic in practice.

“When I got there, I was surrounded by a lot of winners,” Bruce said. “Darius was one of them. He was like, ‘If you don’t want to work, don’t come. Go home.’ I was one of the guys that was chosen for him to hang around as a young guy, because I always handled it and did what I was supposed to do.”

Bruce went from hating lifting weights to winning the MEAC’s Strength Player of the Year his senior year. He led a weightlifting group on the team and carried over from Next Level Fitness to Orangeburg the “500 boys” — a group of players who do 500 pushups one day each week during the summer.

Crawford, who grew up with Josh Norman and trained the NFL cornerback in high school, thinks another Greenwood native in the league would make huge ripples in the community.

“It would mean everything,” Crawford said. “It would give so many other kids that are looking up to these kids hope.”

Whether Bruce is meant to be that star or not, he plans to continue giving back.

“I am going to try to teach the kids here, give them the knowledge and the wisdom that I have now, so they can come up and do the same thing I did,” Bruce said.

The Latest: Floyd's brother appeals for peace in Minneapolis