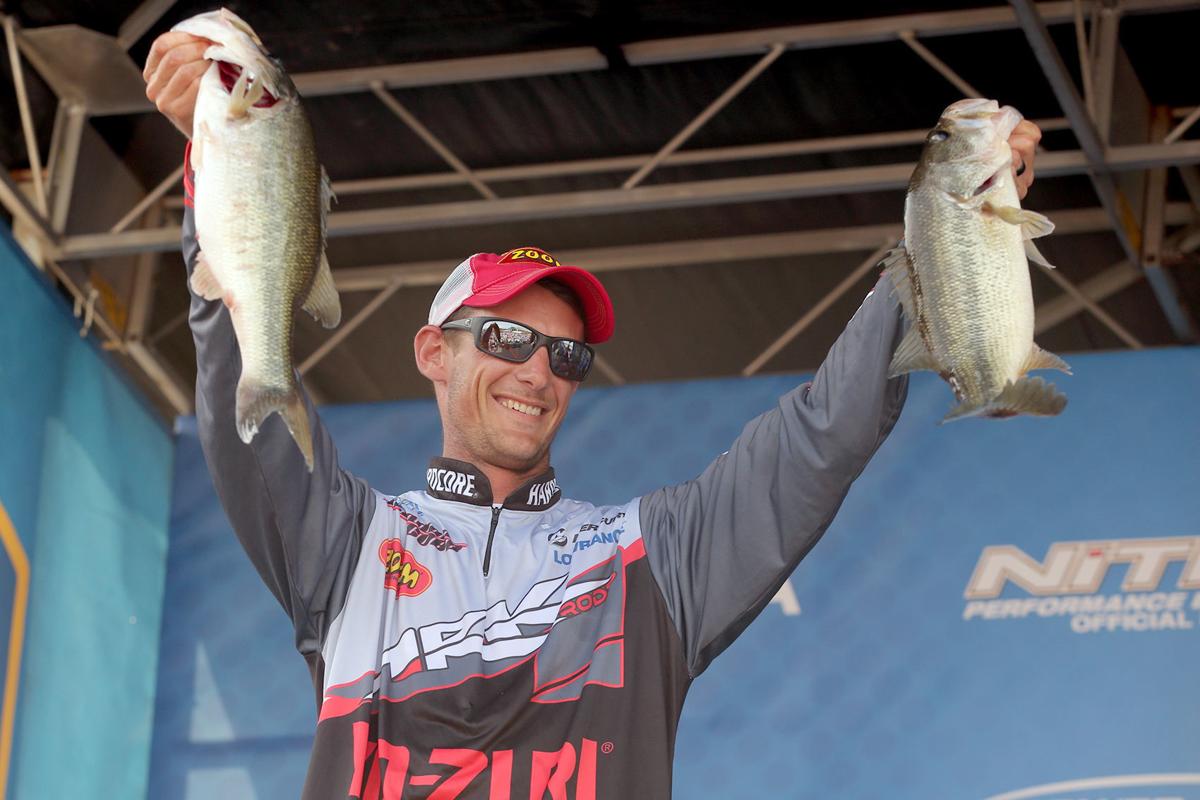 Greenwood professional angler Brandon Cobb holds two of the bass he caught on the final day of the Bassmaster Elite Series tournament this past weekend at Lake Hartwell. Cobb won the tournament and the $100,000 top prize.

Professional Greenwood angler Brandon Cobb grew up fishing at Lake Greenwood and Lake Hartwell, but he never fully realized the impact those lakes would have on his career until he began competing across the country.

“I make my living traveling to fish, that’s what I do,” Cobb said. “I can take aspects of Lake Greenwood to everywhere I’ve been in the country. There’s parts of every lake I’ve been to that I feel familiar with, because I grew up on Greenwood, Hartwell and everywhere around here.

"There’s little key characteristics of other lakes that make me comfortable because I grew up fishing around here.”

Cobb is in his first year on bass fishing’s top series. In April, Cobb took first place in a wire-to-wire win at the Bassmaster Elite Series tour stop at Hartwell. That four-day job paid $100,000, and he’s won more than $400,000 in 105 events on the Fishing League Worldwide tour.

With the season shifting from summer to fall, Cobb offered tips on how to approach bass fishing at Greenwood and Hartwell.

At Greenwood, Cobb said the fish will be moving to shallow water toward the docks, making it the best time to catch schooling fish from mid-September to October.

“It’s usually toward the lower end of the lake, and they school on top, you can visibly see it with your eyes,” Cobb said. “You can throw a variety of topwater lures in to catch them.”

As the fall season progress to winter, the bait fish will move deeper into the water. Cobb said Greenwood is known as one of the best lakes for jigging spoons. He said the fish will be grouped up where seagulls are feeding.

“Starting in about November, Lake Greenwood can be one of the best lakes for catching largemouth and stripers and just about everything,” Cobb said. “You can catch a lot of different fish.”

Cobb said he’s learned a lot about fishing styles and concepts from Lake Greenwood and has taken those lessons to other lakes outside the state.

“It’s helped me in other parts of the country,” Cobb said. “All the dock’s it got. It’s got deepwater fishing in the summer and winter. It’s got muddy water fishing up the lake, and Clearwater fishing down. It’s a small lake with a lot of different cool attributes.”

Over at Hartwell, there’s a larger population of bass, which is Cobb’s specialty. The lake also offers more variety.

“Hartwell’s a cool lake because it’s so vast that it has a lot of different fish,” Cobb said. “It’s got a heavy population of spotted bass, so you can always deepwater fish.”

The fish at Hartwell tend to school together throughout every season. Cobb said the population of blueback herring spawn in the region makes for good catches at the lake.

“That’s one of the things that makes Hartwell so good, because herring are a unique bait fish for the southeast,” Cobb said. “It’s just a good forge for the stripers and bass. The fish are well fed and they bite real well when you find them.”

Driving for 6: Recruiting Haarberg; more OLs for 2021?; onboarding 2020 Husker newcomers about to begin

Biden calls Trump a 'fool' for mocking masks during pandemic