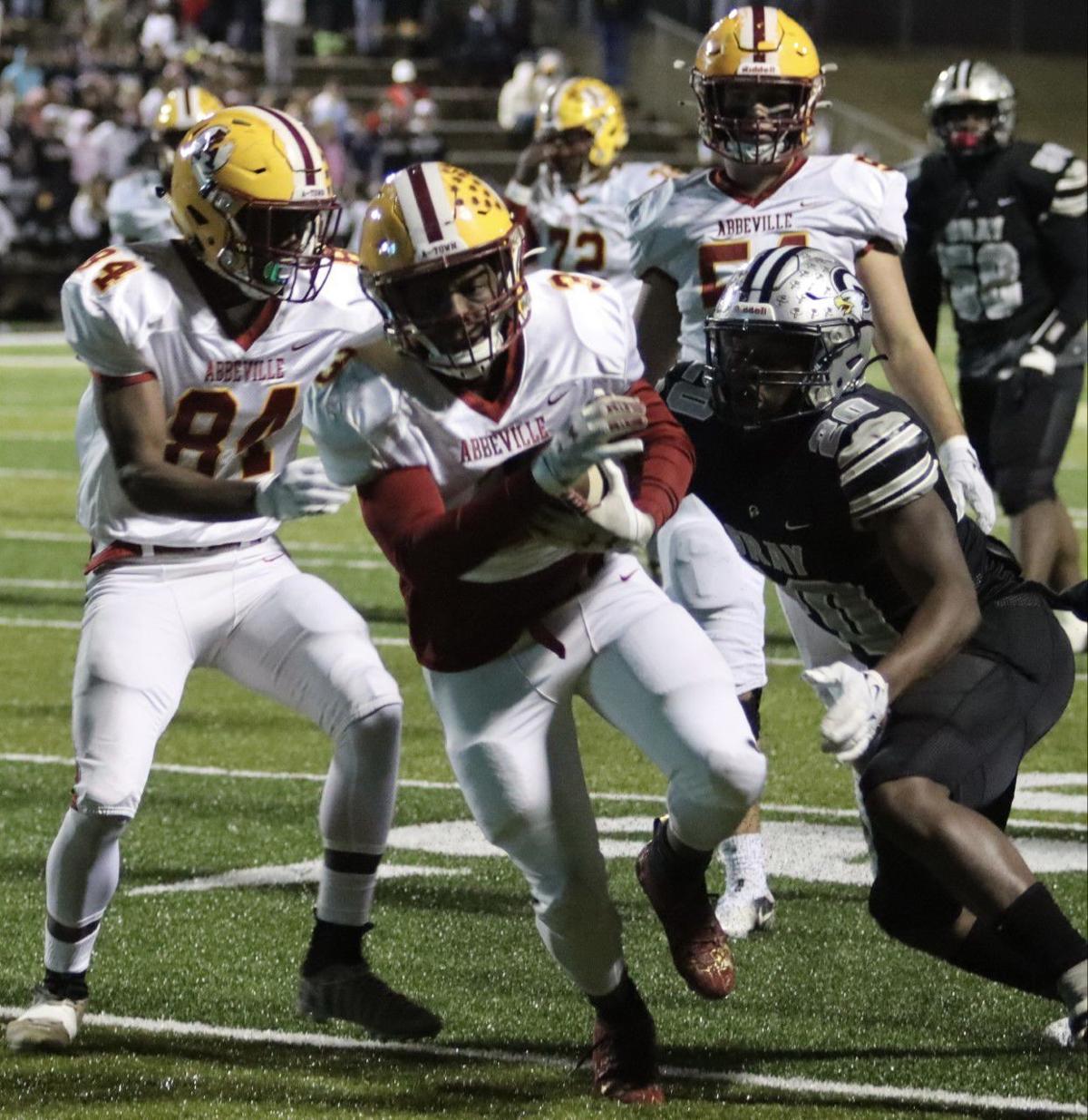 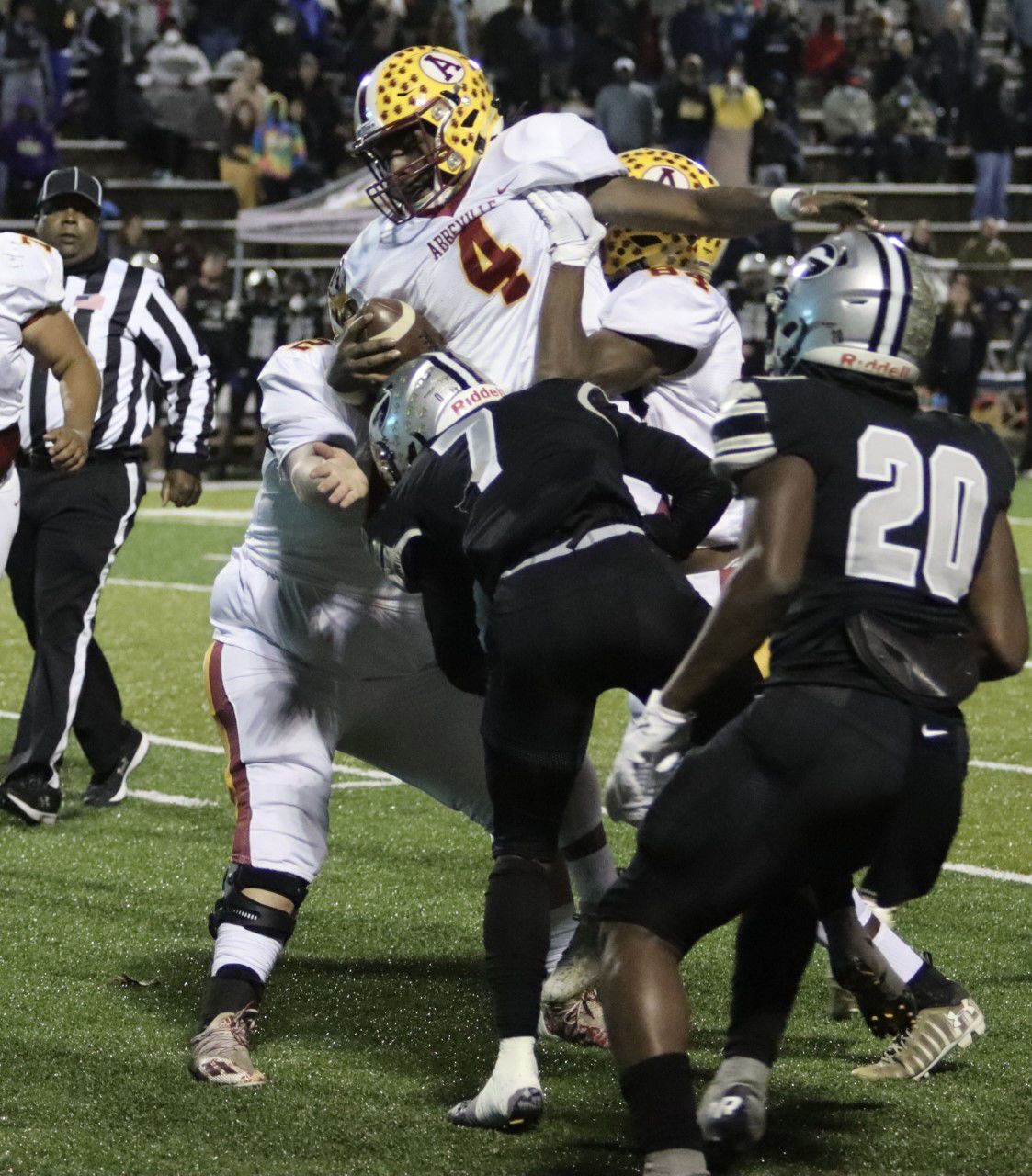 Abbeville’s Zay Rayford is hoisted into the air by Gray Collegiate defenders as he battles for yardage during Friday night’s playoff game. 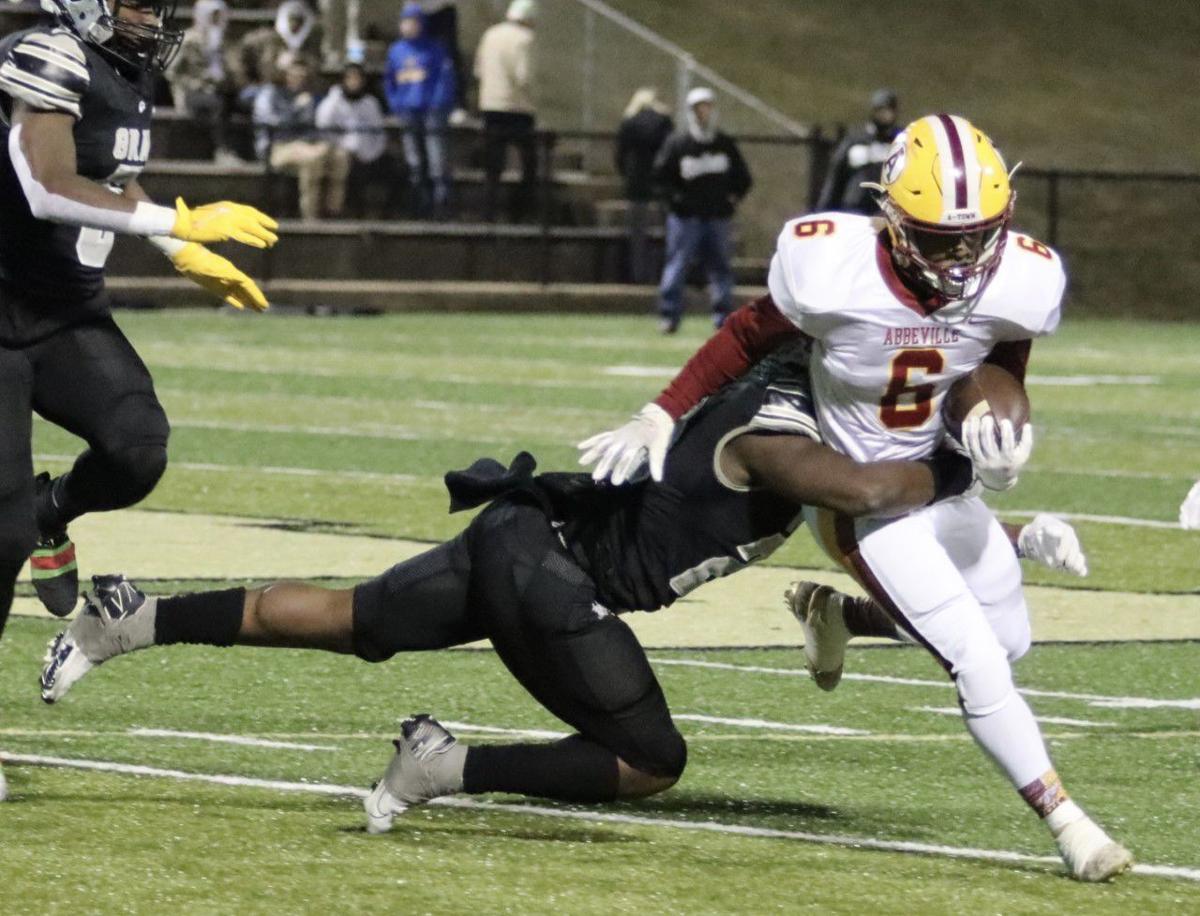 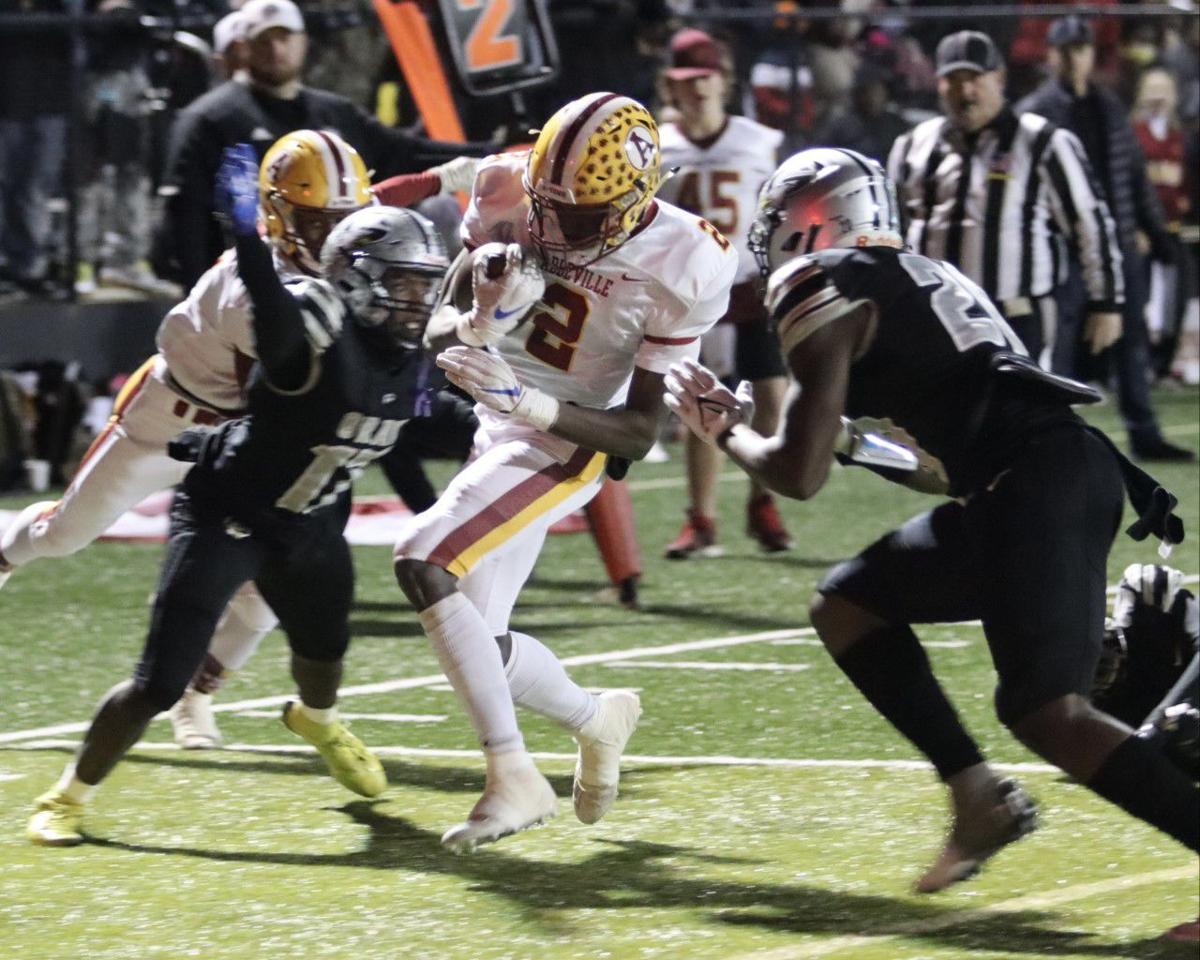 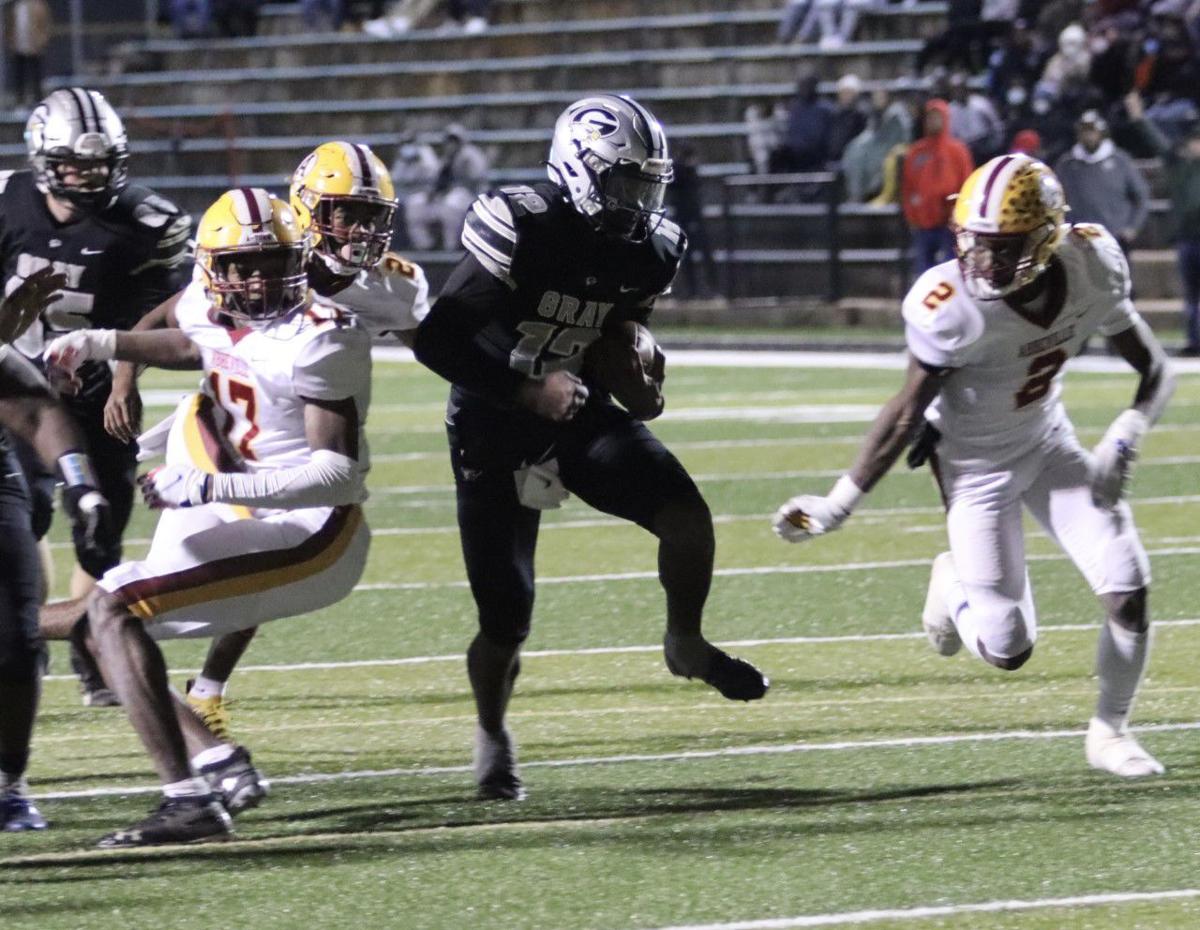 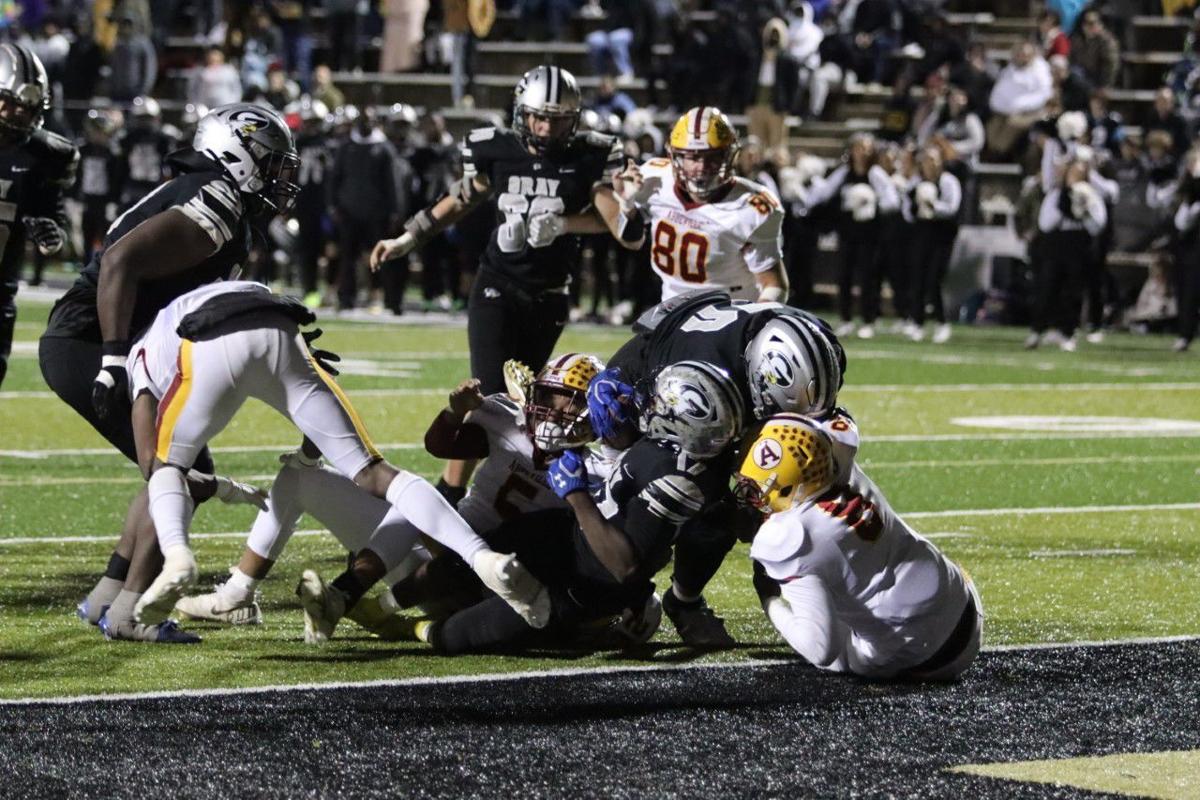 Gray Collegiate’s KZ Adams dives in for a touchdown during Friday night’s game against Abbeville.

Abbeville’s Zay Rayford is hoisted into the air by Gray Collegiate defenders as he battles for yardage during Friday night’s playoff game.

Gray Collegiate’s KZ Adams dives in for a touchdown during Friday night’s game against Abbeville.

WINNSBORO — Gray Collegiate lost to Abbeville in each of the past two seasons in the Class 2A state playoffs.

War Eagles running back KZ Adams made sure it didn’t happen again.

The 5-foot-6 running back carried more than his weight for his team on Friday night, rushing for 312 yards and three touchdowns, and also snagging an interception, as Gray eliminated defending state champion Abbeville 31-15.

“This is my third year playing this team, and they are a great team,” Adams said. “Their community has been coming after me, but it didn’t stop my grind. I just want to thank God and my teammates. They were hating on me the whole week. I’m just in my room fighting the devil off me because it hurts my heart. So, I just made sure I came into this game and played my heart out.”

It’s the earliest playoff exit for the Panthers in nearly a decade of domination, in which the Panthers won five state titles in six years.

“We’ll have to wait and see, but the winner of this game will go a long way,” Nickles said.

Gray quarterback Tre Robinson rushed for 115 yards and a touchdown. Adams iced the game late in the fourth quarter with his interception near his team’s own goal line.

“He’s a special player, but give credit to their offensive line and quarterback,” Nickles said. “He (Robinson) had some big runs too. I thought, all and all, Gray was more physical than us tonight.”

It wasn’t just on offense. The War Eagles (12-1) forced two Abbeville fumbles inside the Red Zone. They were costly for the Panthers, whose first-team offense rarely turned the ball over during the regular season.

“Give them credit,” Nickles said. “One of those, they made a big play down on the goal line.”

Badgers gameday primer: TV, tickets and everything else fans need to know as Wisconsin battles Minnesota