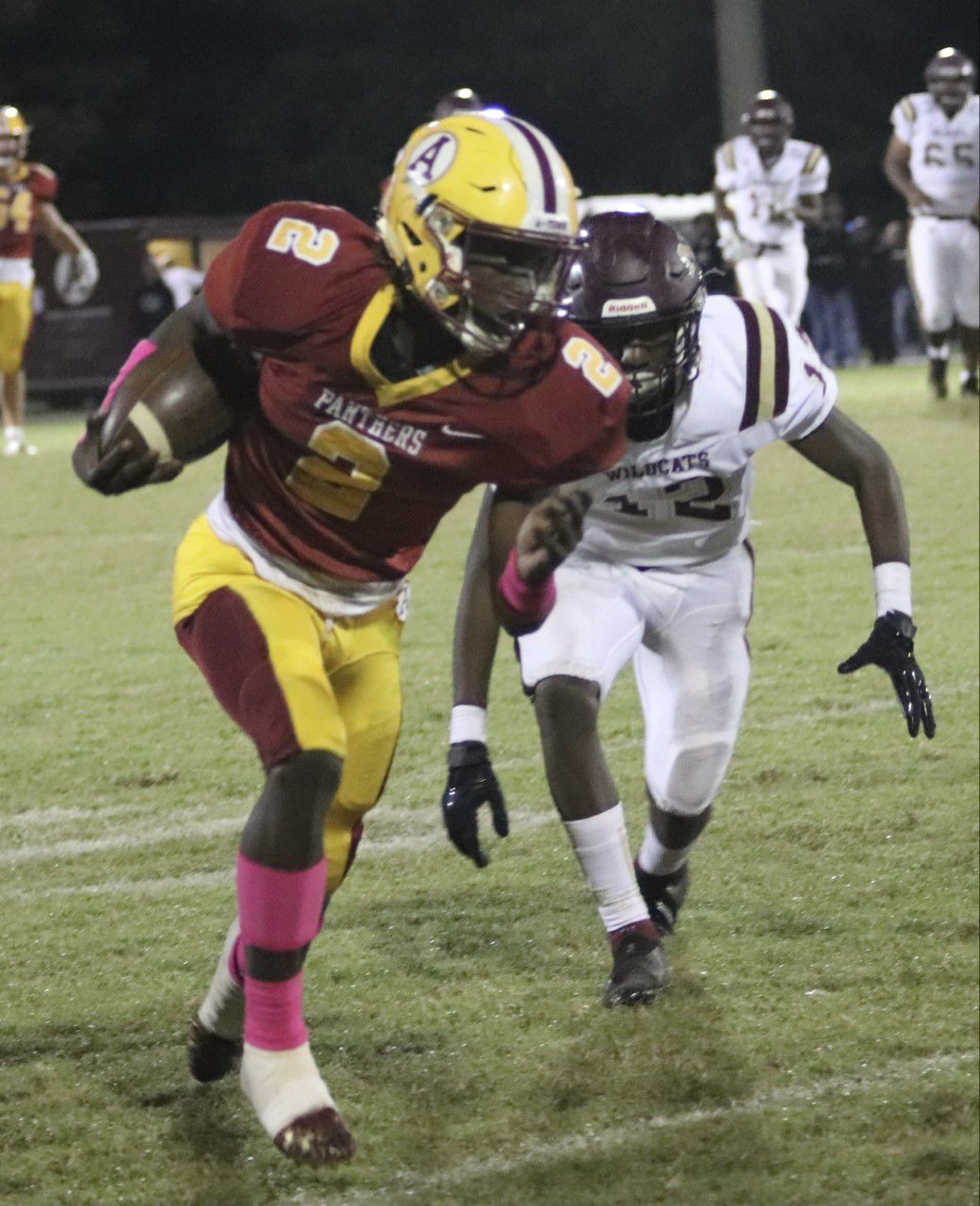 Abbeville’s Antonio Harrison runs for a touchdown after catching a pass from Zay Rayford during Friday night’s game against Ninety Six. 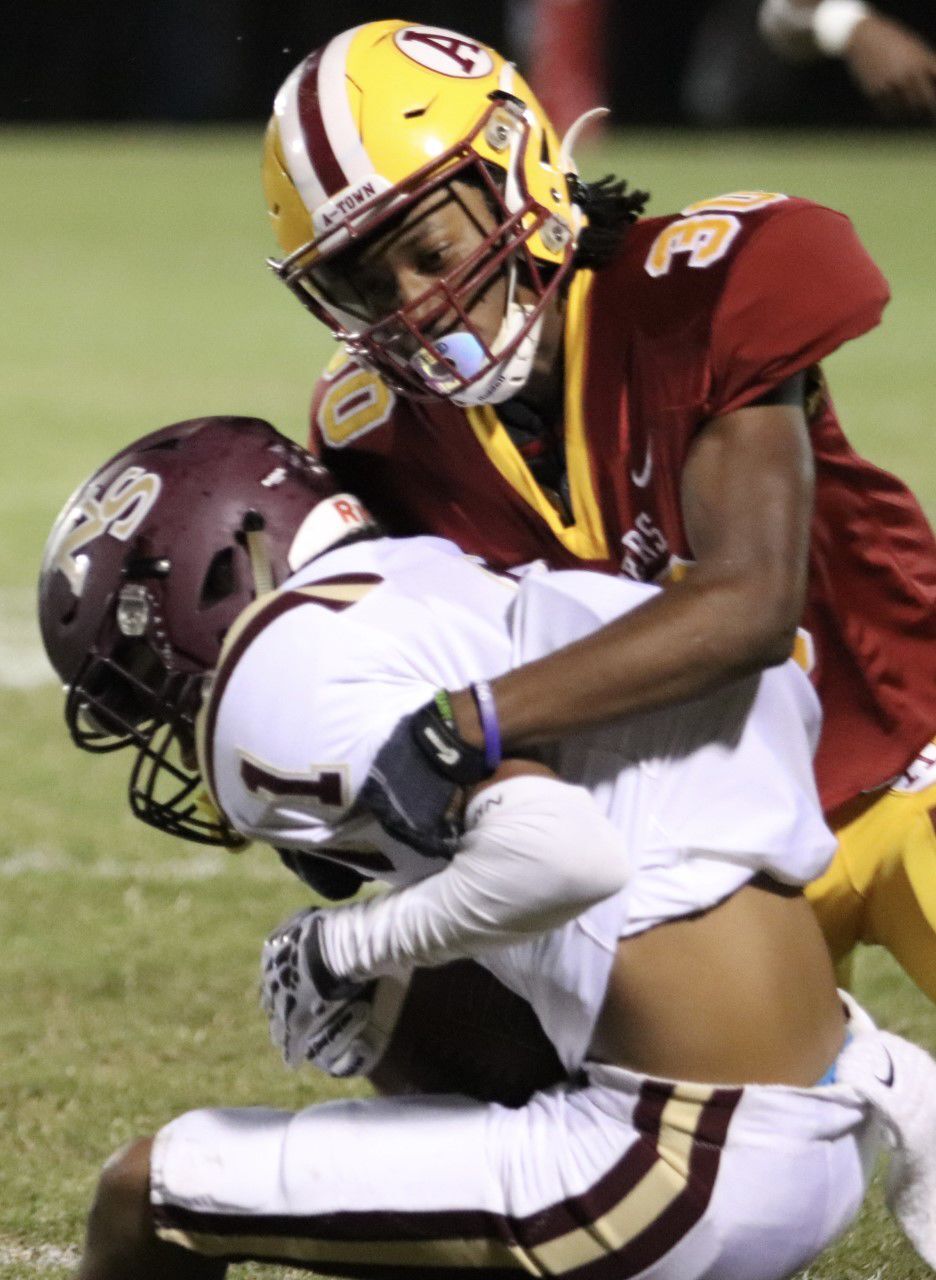 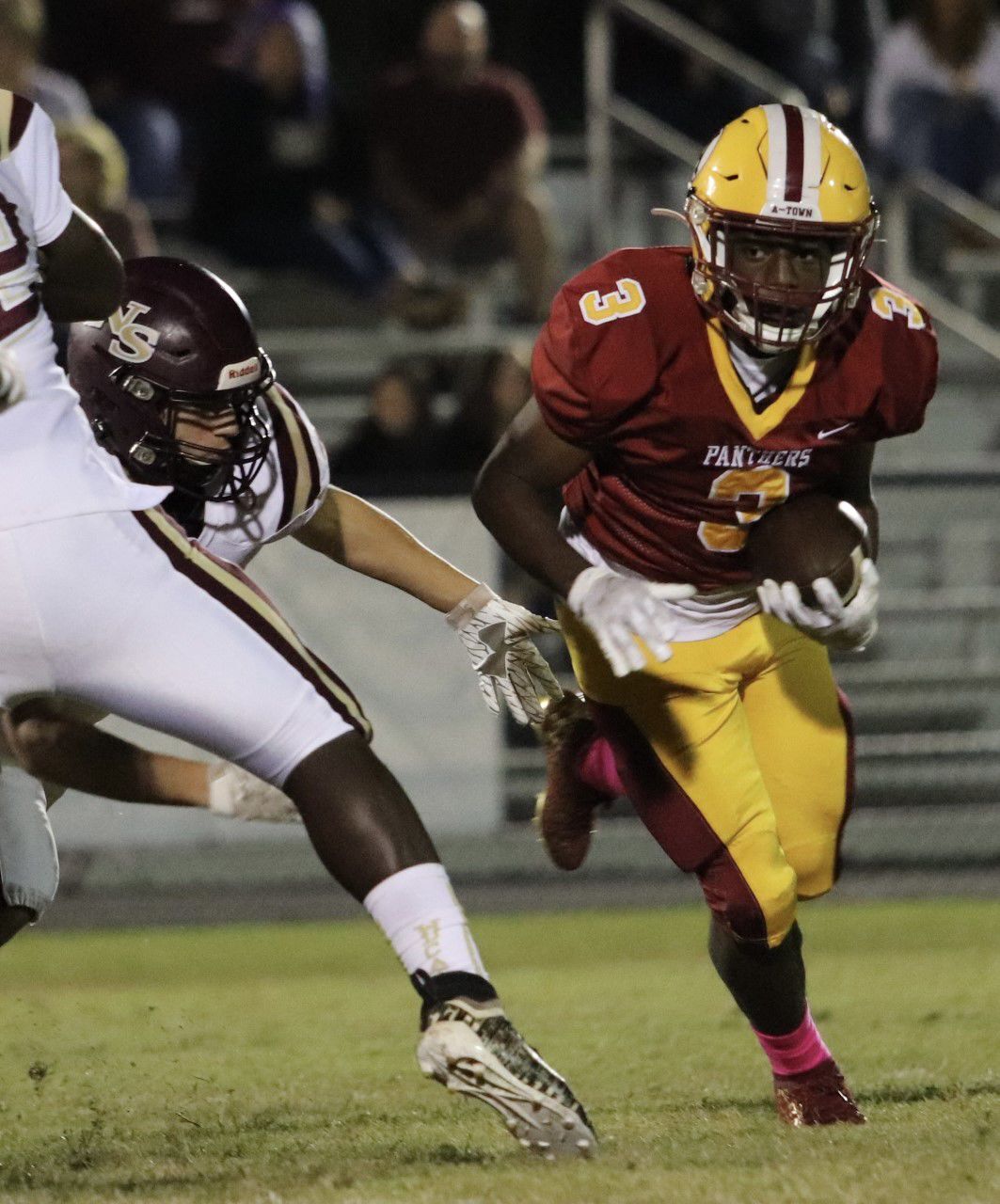 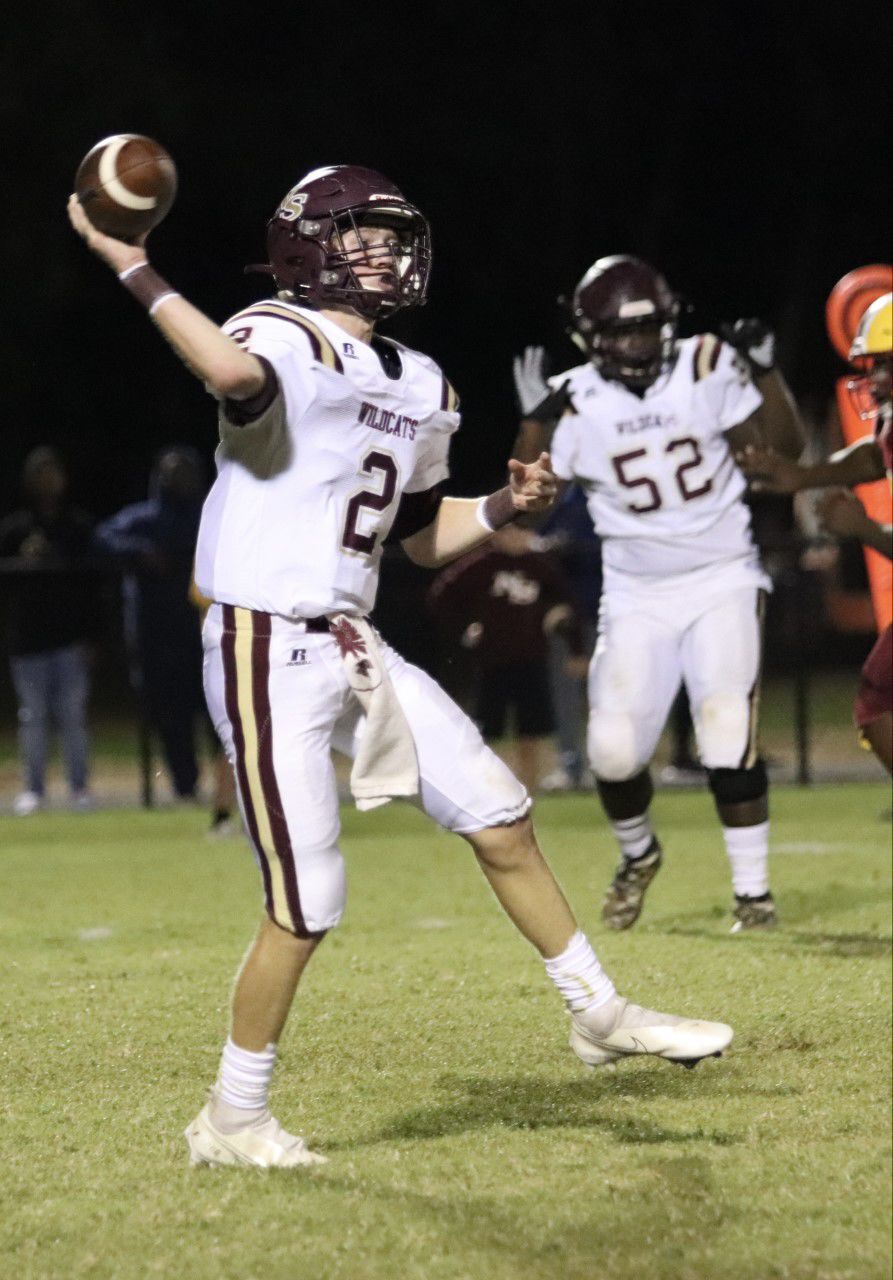 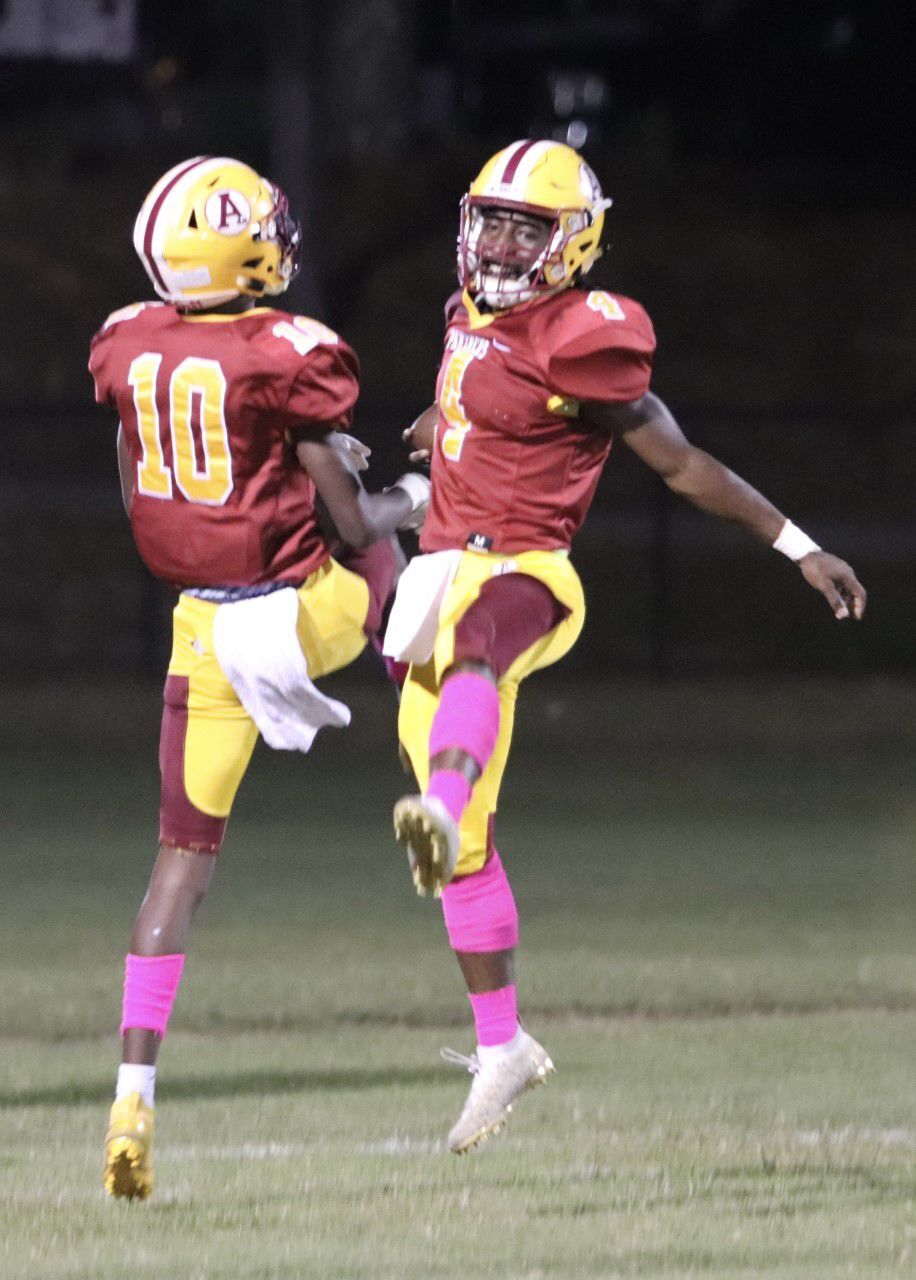 Abbeville’s Antonio Harrison runs for a touchdown after catching a pass from Zay Rayford during Friday night’s game against Ninety Six.

ABBEVILLE — The national high school record for the most interceptions returned for a touchdown in a single season is six.

Lomax capped Abbeville’s scoring Friday night in a 55-0 Region 1-2A blowout win against Ninety Six with a 56-yard pick-six.

“I’ve never heard of that in my life. We’re going to have to check the record books,” Abbeville coach Jamie Nickles said. “Divine intervention is all I can say.”

Maurice Cooper and Ben Sukut are tied for the national pick-six record, according to the National Federation of State High School Associations. Cooper played at Saginaw Nouvel in Michigan and had six in 1994. Sukut, who played for Mission Viejo Capistrano Valley Christian in California, had six in 2012.

“When my defensive front gets pressure, it’s kind of hard for the quarterback to avoid the DBs,” Lomax said. “When you’ve got everybody else out there getting picks, you can’t try to avoid one.”

To the people who selected the North-South All-Star Game roster, which Lomax is not part of, the Abbeville senior — who was named Mr. Panther before the game — said he has no hard feelings.

“I’m just going to stay on my grind and do what I do,” Lomax said. “I can’t control what they did, so I’m going to do what I can control.”

No. 1-ranked Abbeville (9-0 overall, 4-0 region) had four takeaways against the Wildcats (4-4, 1-2). In addition to Lomax, Mikelyn Bowie, CJ Vance and Javario Tinch each had interceptions.

“I thought we were sharp in every phase of the game,” Nickles said. “Give our (defensive) coaches a lot of credit. They do a good job in that aspect of the game. I thought we flew around in the secondary pretty good.”

Abbeville scored early and often against the Wildcats, amassing 21 points in each of the first two quarters for a 42-0 halftime lead.

There was a running clock for the entire second half, but Abbeville got a touchdown from its backup quarterback before Lomax ended things with his interception.

“We knew it would take about a perfect game for us, and we knew we had to have a lot of breaks,” Ninety Six coach Matthew Owings said. “They forced a lot of turnovers again. Give Abbeville credit. They slowed us down a whole lot. We screwed ourselves up, and that’s so frustrating. But, being positive, we got down into scoring position four times — and I don’t care what anybody has to say, that was still their first defense in.”

Quarterback Zay Rayford led the way for Abbeville. He rushed seven times for 103 yards and two touchdowns and also passed for another TD.

Abbeville running back Antonio Harrison was on the receiving end of Rayford’s TD pass, and Harrison also rushed for a 35-yard score.

J’Marion Burton, Karson Norman and Jay Hill also had TD runs for Abbeville, which travels to Christ Church next Friday with the region title on the line.

Abbeville racked up 353 yards of total offense against the Wildcats. Ninety Six quarterback Payne Davis was 13-of-37 passing for 137 yards. His top target was Matthew Deal, who had two catches for 51 yards.