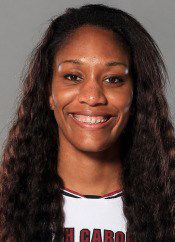 Greenwood native Ben Martin shot a 3-under 69 and lay tied for seventh place after his first round of the Korn Ferry Tour's TPC Colorado Championship at Heron Lakes.

This weekend's tournament is Martin's second Korn Ferry Tour start; his first was in early June at the BMW Charity Classic in Greer. The Korn Ferry Tour, formerly named the Web.com Tour, is a step below the PGA Tour.

Martin will play three consecutive tournaments starting this week. As he recovers from a hip injury that took him out of the PGA Tour, Martin has six total Korn Ferry Tour starts. After those allotted starts, Martin will be able to play six PGA Tour starts.

NEW YORK — Las Vegas will have a lot of its hometown players to root for at the WNBA All-Star Game on July 27.

Reigning rookie of the year A'ja Wilson, a USC alumna, is one of the team captains. She'll be joined by Aces teammates Liz Cambage and Kayla McBride in the starting lineup. Wilson may feel pressure to draft her two teammates for the game when her team faces a group led by Elena Delle Donne, who is a captain for the second straight season.

Wilson and Delle Donne will select their teams from the other starters chosen by the fans, media and players.

ROCK HILL — Former Tennessee forward DJ Burns is returning to his hometown to play for Winthrop.

The 6-foot-9 Burns said Thursday on Twitter he had committed to the Eagles. Burns finished at York Preparatory Academy a year early to join the Vols. He spent last year as a redshirt, practicing and traveling — but not playing — with the team.

Burns had more than 1,000 points and 1,000 rebounds in his prep career and was considered the state's third best prospect when he signed with Tennessee.

The suspension was announced Thursday before the AL West-leading Astros played a series opener at Texas in their first game after the All-Star break. Marisnick, who also was fined, appealed the suspension and was available to play.

Lucroy was carted off the field last Sunday after the collision at the end of the eighth inning of a game at Houston the Astros won 11-10 in 10 innings. The Angels catcher sustained a concussion and broken nose. Marisnick was called out for colliding with Lucroy and the call was upheld after a crew chief review.

KANSAS CITY, Mo. — The Kansas City Royals are bringing Bubba Starling to the majors, culminating a journey that took eight years in the minors for the hometown hero and former first-round draft pick.

Starling will join the Royals for the opener of their series against Detroit on Friday night.

The 26-year-old outfielder, who starred at nearby Gardner-Edgerton High School, has struggled for years to live up to enormous expectations in the minors. But he is hitting .310 with seven homers and 38 RBIs in his first full season at Triple-A Omaha, and recently played in that level's all-star game.

PASADENA, Calif. — A statue capturing Brandi Chastain's iconic reaction to scoring the U.S. team's winning goal in the 1999 Women's World Cup has been unveiled outside the Rose Bowl.

Chastain was on hand for the unveiling Wednesday, the 20th anniversary of the historic win which coincided with celebrations in New York for this year's World Cup champion team.

This year's the team sealed its second consecutive tournament win by beating the Netherlands 2-0 on Sunday.

American goalkeeper Zack Steffen has been loaned from Manchester City to Fortuna Duesseldorf for the 2019-20 season.

Fortuna, which finished 10th in the Bundesliga last season, announced the loan Tuesday.

The 24-year-old Steffen has become the No. 1 goalkeeper on the U.S. national team. He left the University of Maryland to begin his professional career with Freiburg but was limited to appearances with its reserve team in the fourth tier during 2015 and 2016. He signed with Major League Soccer's Columbus Crew in July 2016, spent the rest of the year with the United Soccer League's Pittsburgh Riverhounds, and then became Columbus' starting goalkeeper in 2017.

GREAT BARRINGTON, Mass. — Jim Bouton, the former New York Yankees pitcher who shocked and angered the conservative baseball world with the tell-all book "Ball Four," has died. He was 80.

Bouton's family said he died Wednesday at the Great Barrington home he shared with wife Paula Kurman. He fought a brain disease linked to dementia and was in hospice care. Bouton also had two strokes in 2012.

Published in 1970, "Ball Four" detailed Yankees great Mickey Mantle's carousing and the use of stimulants in the major leagues. Bouton's revealing look at baseball off the field made for eye-opening and entertaining reading, but he paid a big price for the best-seller when former teammates and players and executives across baseball ostracized him for exposing their secrets. He wasn't invited to the Yankees' Old-Timers' Day until 1998.

LOS ANGELES — Alex Morgan won female athlete of the year and shared the best team award with her U.S. women's national soccer teammates at The ESPYS, hours after the group was honored with a ticker-tape parade in New York City to celebrate their Women's World Cup championship.

Giannis Antetokounmpo of the Milwaukee Bucks won male athlete of the year Wednesday night at the show honoring the past year's top athletes and moments in sports.