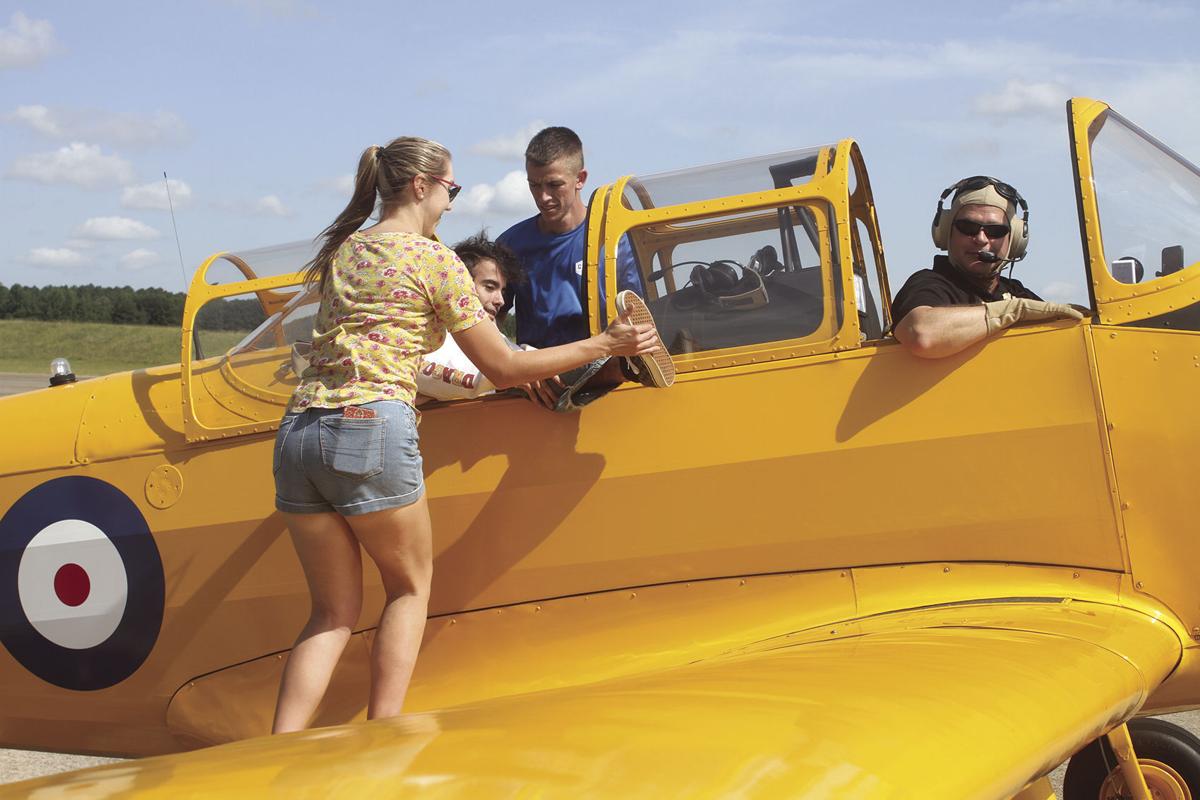 James, a student from Connie Maxwell Children’s Ministries, gets help getting his leg into the co-pilot seat Saturday. The pilot is John “Buster” Willcox. 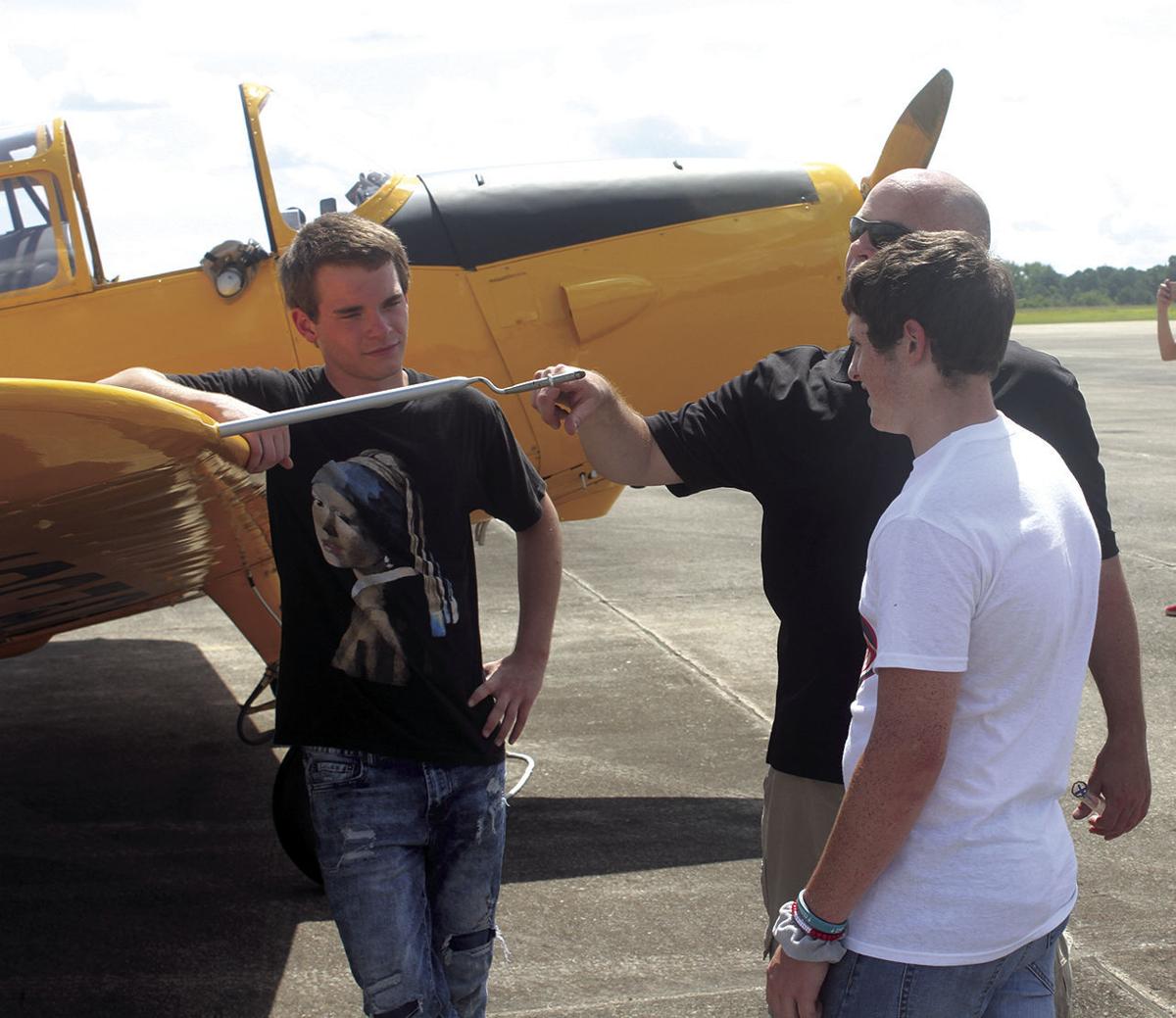 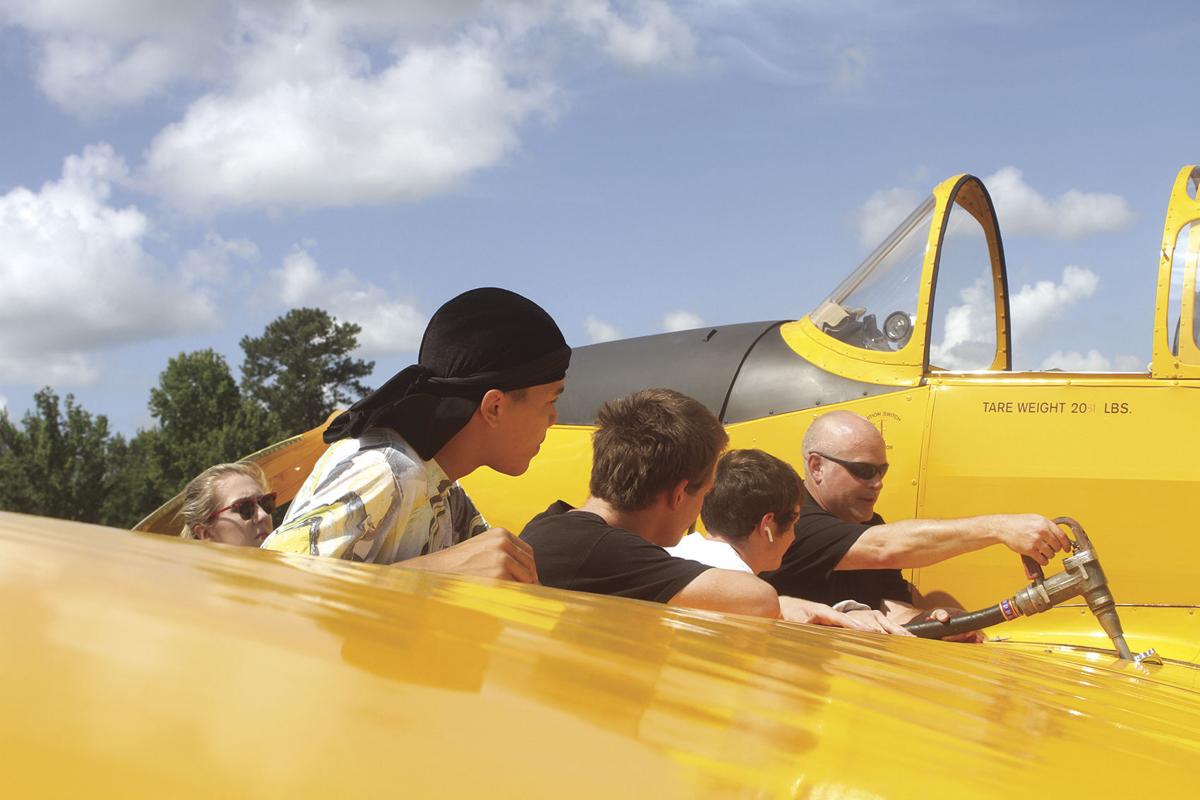 Youths from Connie Maxwell Children’s Ministries talk Saturday with pilot John “Buster” Willcox while he fills one of the gas tanks on the former World War II trainer. 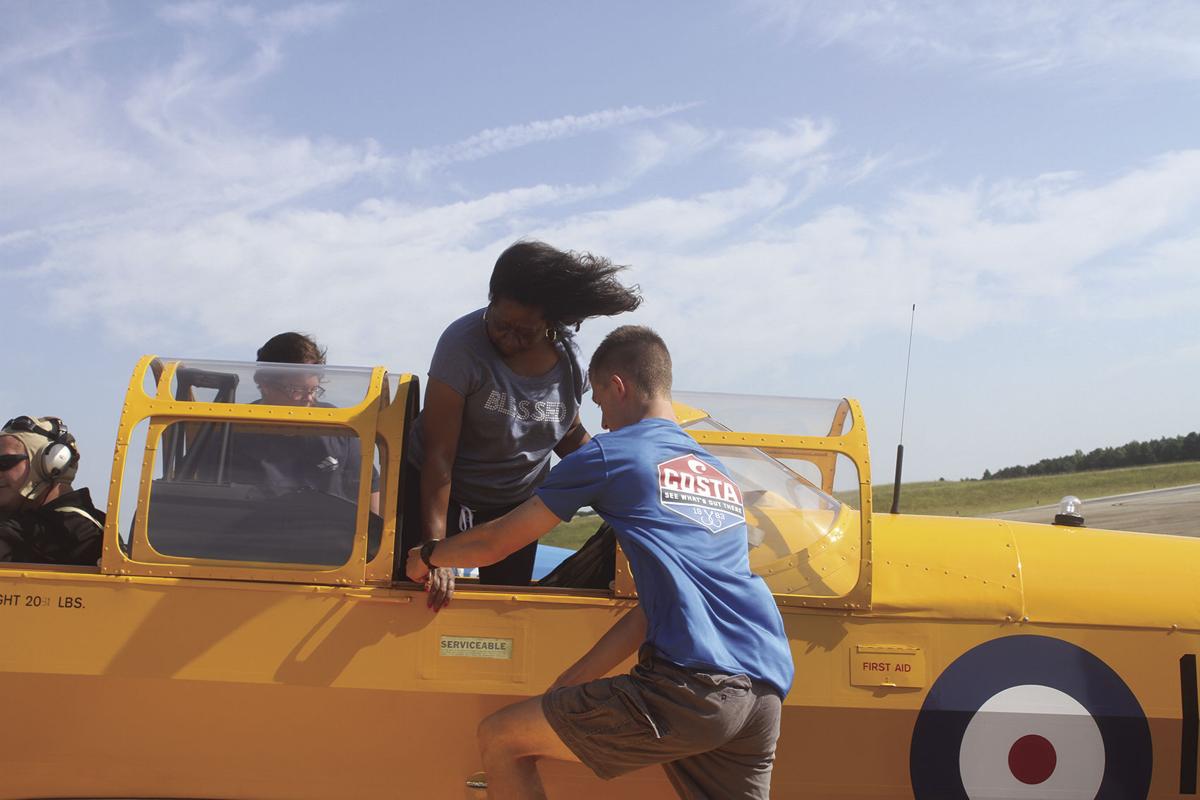 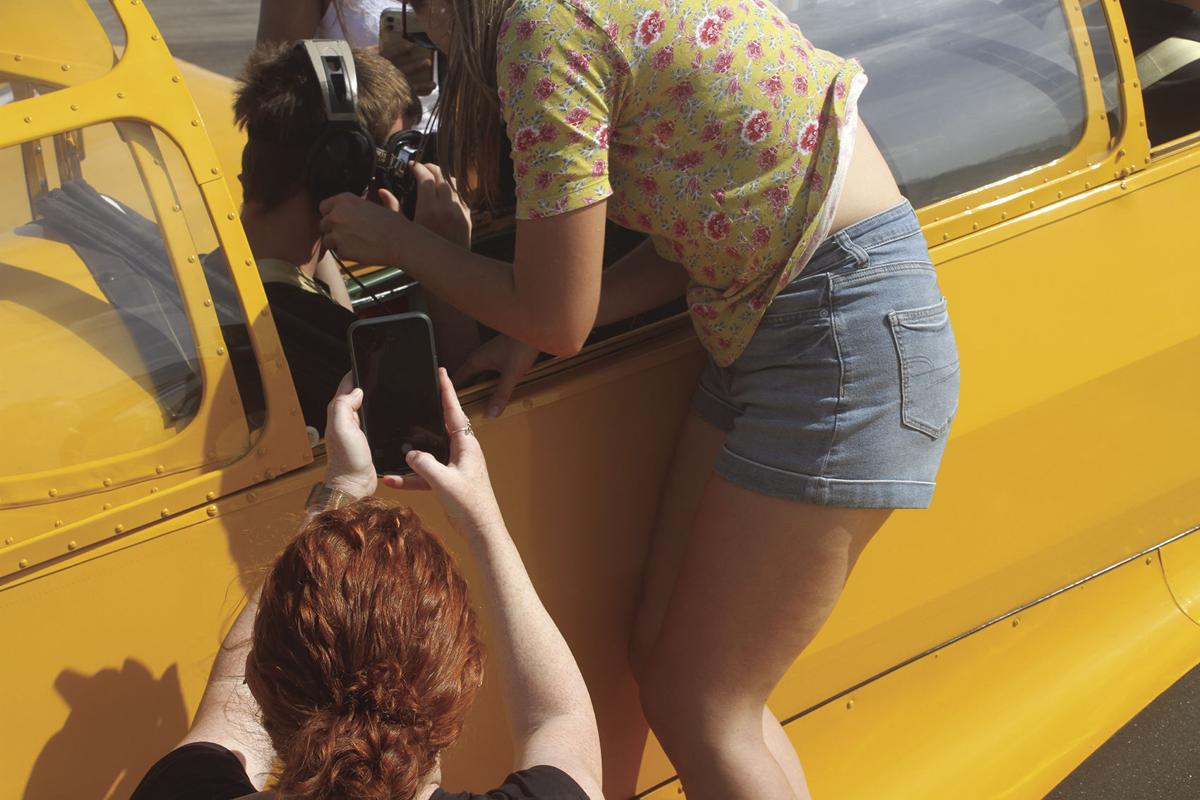 A youth from Connie Maxwell Children’s Ministries gets his earphones adjusted as others whipped out their cellphones.

James, a student from Connie Maxwell Children’s Ministries, gets help getting his leg into the co-pilot seat Saturday. The pilot is John “Buster” Willcox.

Youths from Connie Maxwell Children’s Ministries talk Saturday with pilot John “Buster” Willcox while he fills one of the gas tanks on the former World War II trainer.

A youth from Connie Maxwell Children’s Ministries gets his earphones adjusted as others whipped out their cellphones.

Riding a taxi gets more interesting when it has wings and soars up to 200 mph.

The project came about because Connie Maxwell does good work with children in difficult situations, Wilcox said.

Rides were limited to taxiing down the runway as all of the students were minors. It was a decision some youths were ambivalent about, although after shooting down the runway, some expressed a desire to actually go up.

Some adults were offered the chance to soar. Only a few took it. Catherine Lanier had doubts.

“I love roller coasters, but going up in a plane?” she said. It prompted a man standing nearby to say it’s just like a roller coaster, just no rails.

Eventually, Lanier and a friend, Mariah Carter, opted for taxi rides. Carter said the hardest part was getting in and out of the space for the co-pilot’s seat partly because of bursitis.

That wasn’t an issue for any of the youths from Connie Maxwell, although James, one of the taller youths, practically did a split with his foot ending up nearly level with his head as he tried to squeeze into the space for the co-pilot’s seat. He had to get help getting his leg down into position.

“It might brighten the kids’ day a little bit with some really cool airplanes,” Wilcox said Friday.

The Fairchild PT-26 Cornell II is an all-yellow monoplane and was a primary trainer in World War II. The Army Air Corp and US Navy flew variants of the aircraft. Wilcox said the one they have was used by the Royal Canadian Air Force as a primary trainer.

The other aircraft is a Boeing PT-17 Stearman, a blue bi-plane with yellow wings. He said it was an Army Air Corp primary trainer.

Both machines are vintage aircraft, restored as close to original condition as could be done, Wilcox said. Some updating has been done, such as devices to record and transmit the plane’s location and information to other pilots and air traffic controllers, he told the youths as they huddled around the PT-26, waiting for the plane to be refueled.

“I know as a kid growing up, flying opened up a lot of opportunity.” Wilcox recalled seeing fighter planes and he was hooked. He served as a pilot for 25 years.

“It’s better than a video game; instead of virtual reality, it’s reality-reality,” he said. “And it’s a little bit of history. These airplanes would train kids who came right off a tractor. After a few hours of training, if they didn’t cut it, they were given a backpack and a rifle and sent to Europe to fight on the ground. If they made it, they would be fighting in the air.

“You can smell it and hear it and it puts you where these guys who were dealing with it were,” Wilcox said.

“The students had a good time,” he said. “It’s always fun to introduce kids to planes. You never know if they’ll get the bug. I got the bug.”

Maybe some of them did. One youth started texting on his cellphone immediately after getting out of the plane to tell people what it was like.

Although the youths were grounded, a couple of them asked team leader Ron Amerson if they could get permission from their parents to go up in the air the next time. Another asked Wilcox how much it would cost to go up.

After a ride, a youth told his friends “I’m gonna do it one day. If I do it, I want to do everything, doughnuts and loops.”

Another youth said after his ride, “Now it makes me want to watch ‘Top Gun.’”

The youths encouraged each other. Well, sort of. One reassured a fellow, “It’s like a slingshot only 100 times worse.”

Cody, one of the first students to get on the plane, offered some truth: “It was like riding in a car, a loud car. It wasn’t scary at all.” Another said the plane only went up to about 80 mph.

Only one youth actually flew. Amerson’s son, Jay, went up with Wilcox. Youths watched the yellow aircraft taxi down the runway, take-off and then get smaller, smaller and smaller.

“Oh, he is far up,” one youth said as a speck raced under the clouds. When asked if he would go up in a plane, he shook his head. Another youth said “He’s having the time of his life. He’s high, like an ant.”

“He’s screaming, oh he’s screaming,” another youth said. Then some students lost the plane, only to find a dark mosquito-sized speck among the clouds.

Jay didn’t scream, but admitted he was nervous.

F1 driver Vettel keeps his seat at Aston Martin for 2022

Lawyer says Murdaugh to turn himself in on insurance fraud

Community divided over book ban at school board meeting