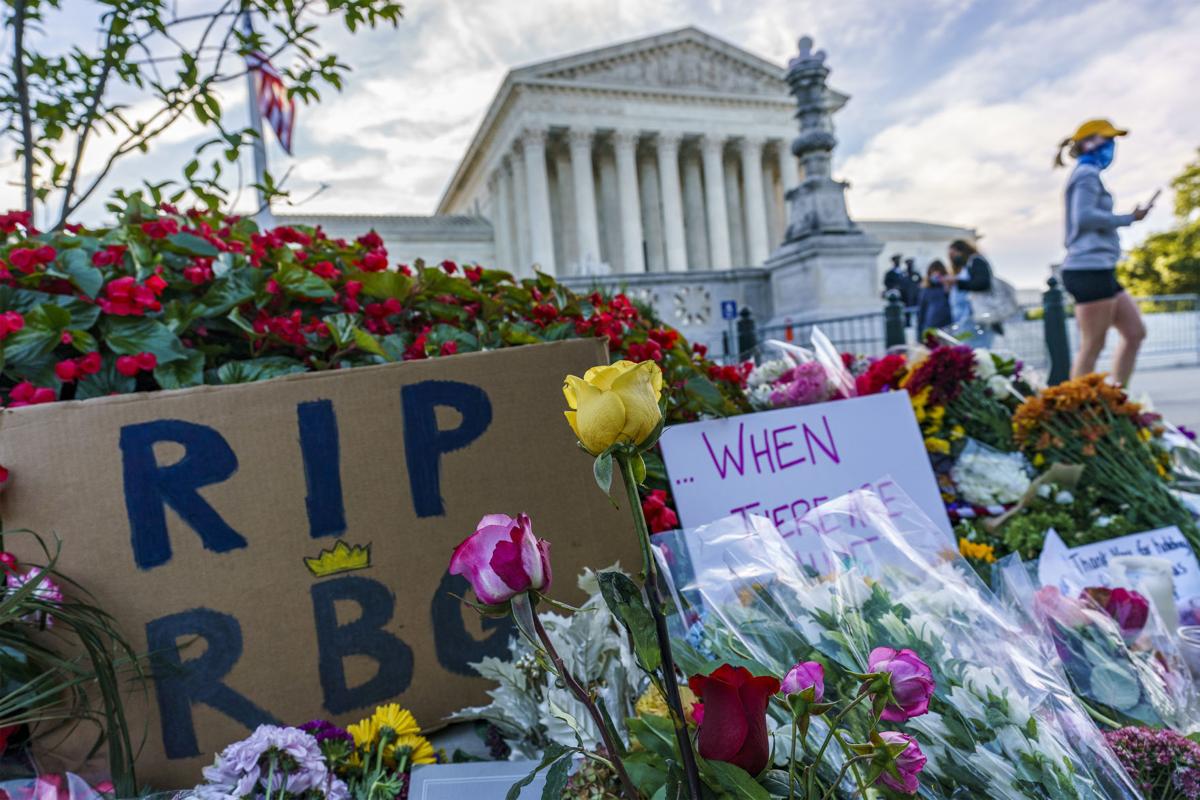 People gather at the Supreme Court on the morning after the death of Justice Ruth Bader Ginsburg. 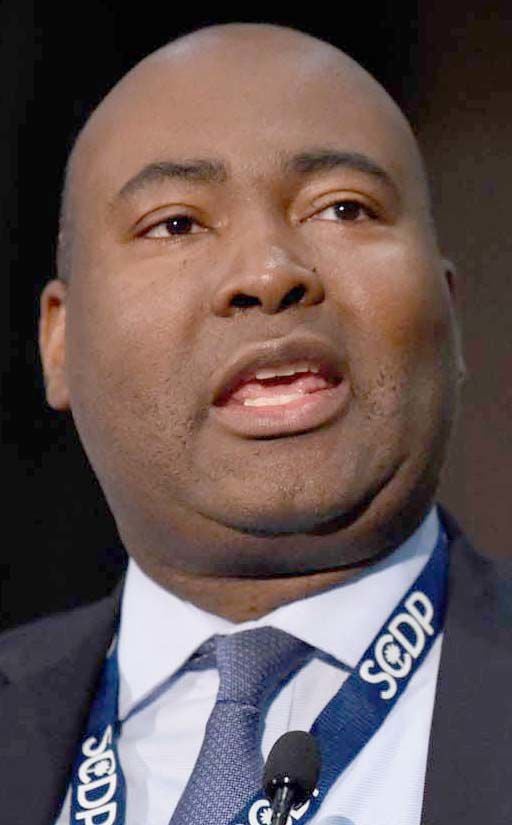 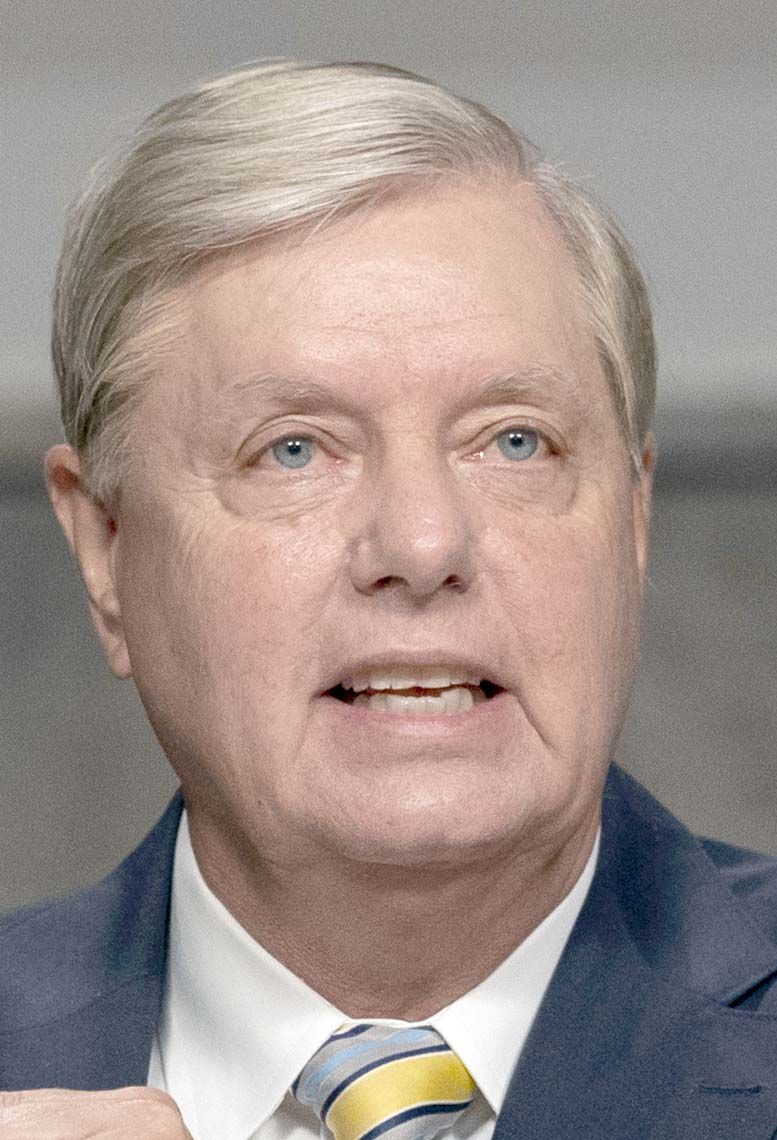 Tributes and condolences flowed in after the Friday night death of Ruth Bader Ginsburg, an associate justice of the U.S. Supreme Court since 1993.

Ginsburg died at her home in Washington from complications of metastatic pancreatic cancer. She was 87.

Mixed with the condolences are opinions about whether the court vacancy should be filled this close to a presidential election.

With less than two months before the election, doing so would be a reversal from 2016, when McConnell, who controls the schedule for court nominee votes in the Senate, blocked hearings for then-President Barack Obama’s court nominee, Judge Merrick Garland.

Obama appointed Garland to replace Antonin Scalia, a conservative justice who died Feb. 13, 2016. McConnell said then that the new president — either Hillary Clinton or Donald Trump — should be able to appoint a justice. Garland never got a hearing.

“The American people should have a voice in the selection of their next Supreme Court Justice. Therefore, this vacancy should not be filled until we have a new president,” McConnell said in 2016.

When Trump won the election, he nominated Neil Gorsuch to fill Scalia’s seat. The Senate confirmed Gorsuch in April 2017.

“It was with great sadness that I learned of the passing of Justice Ginsburg,” Graham said. “Justice Ginsburg was a trailblazer who possessed tremendous passion for her causes. She served with honor and distinction as a member of the Supreme Court.

“While I had many differences with her on legal philosophy, I appreciate her service to our nation. My thoughts and prayers are with her family and friends. May she rest In peace.”

Graham, who is locked in a dead heat in the polls with Democratic challenger Jaime Harrison, pointed to his earlier statements about filling a court vacancy.

“Well, Merrick Garland was a different situation. You had the president of one party nominating, and you had the Senate in the hands of the other party. A situation where you’ve got them both would be different. I don’t want to speculate, but I think appointing judges is a high priority for me in 2020,” Graham, the Senate Judiciary chairman, said in May.

On Saturday, Graham tweeted: “I will support President @realDonaldTrump in any effort to move forward regarding the recent vacancy created by the passing of Justice Ginsburg.”

Harrison tweeted his condolences: “Marie and I are praying for the friends and family of Justice Ruth Bader Ginsburg. Last night, the Supreme Court and the United States lost a public servant who upheld the rule of law.”

In a CNN interview, Harrison said Graham “stated on a number of occasions that, in the fourth year of a term in an election year, a president’s judicial nominee should not be considered — should not be voted on. And that he would not vote on it.

“So, the question is he (Graham) going to keep his promise to the American people?” Harrison asked. “We have come to see that Lindsey Graham’s word has not been very valuable over the past few years. And so, at the end of the day, I think the people of South Carolina will make a judgment on whether or not they want this person to represent them.”

Closer to home, state Sen. Floyd Nicholson, D-Greenwood, said, “I think it’s going to be a big loss. I think she (Ginsburg) was very knowledgeable about the Constitution and how it should be applied. She was a big advocate for women’s rights. She was a voice listened to by both liberals and conservatives because of her vast knowledge of the Constitution. She applied it so that justice was for everyone.”

Nicholson said he doesn’t support a nominee getting a hearing before the upcoming presidential election.

“We are talking about 45 days. How can they fill a vacancy in 45 days?” Nicholson said. “With everything and the confirmation, it takes months.”

State Rep. John McCravy, R-Greenwood, said now is not the time to talk about the political side of things.

“As a pro-life person, I care about all life, including Ruth Bader Ginsburg’s life,” he said. “This may lead to an opportunity for a more pro-life Supreme Court, but we certainly mourn her death as much as anybody’s.”