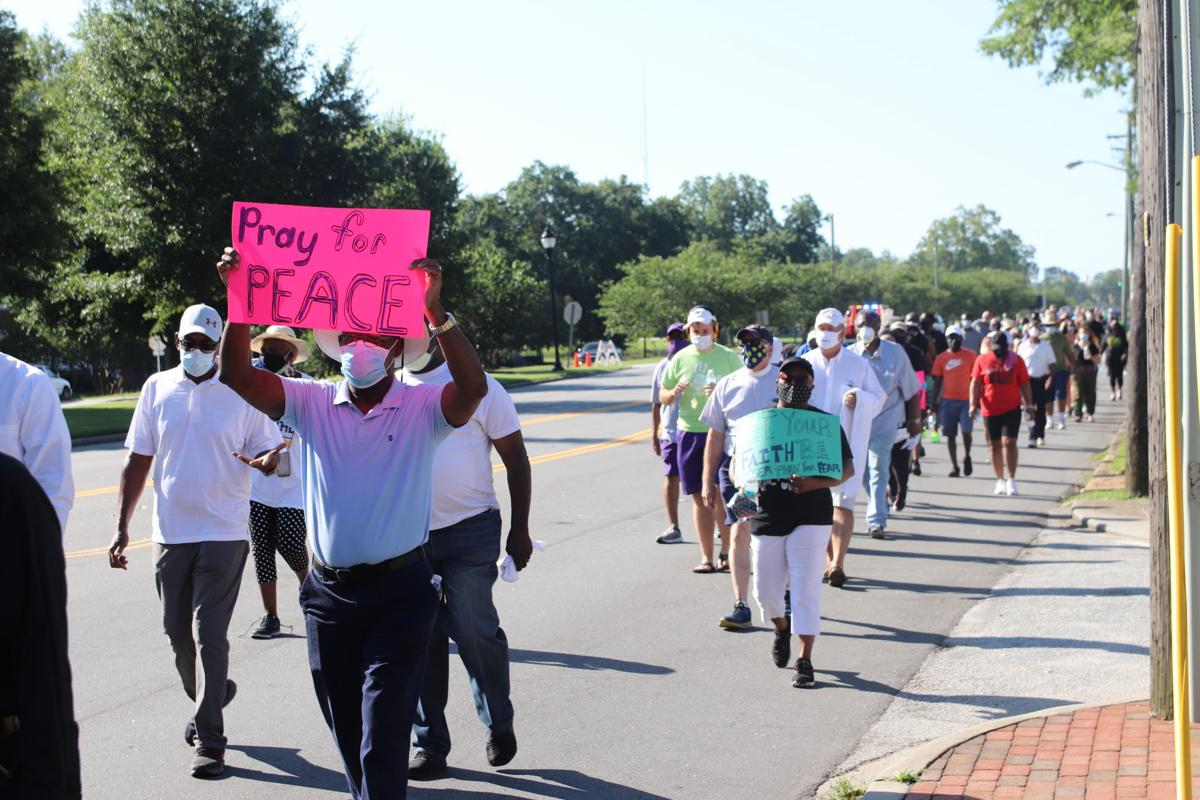 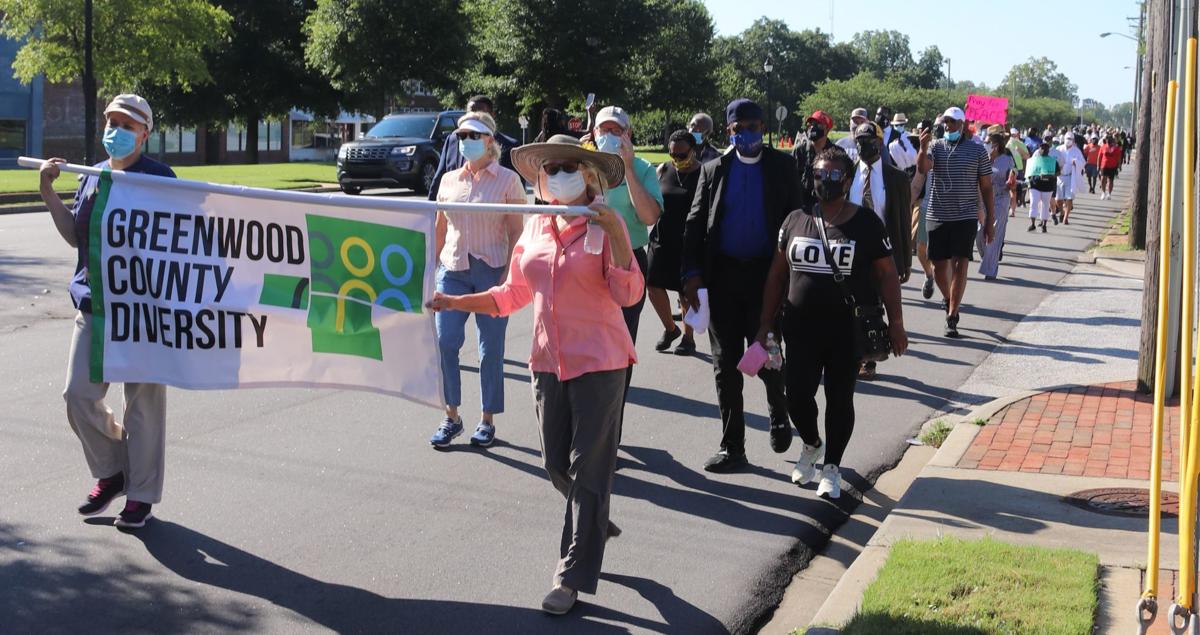 People march from South Main Baptist Church up Main Street on Saturday to the Greenwood County Courthouse for a Faith for Black Lives Peaceful Protest rally. 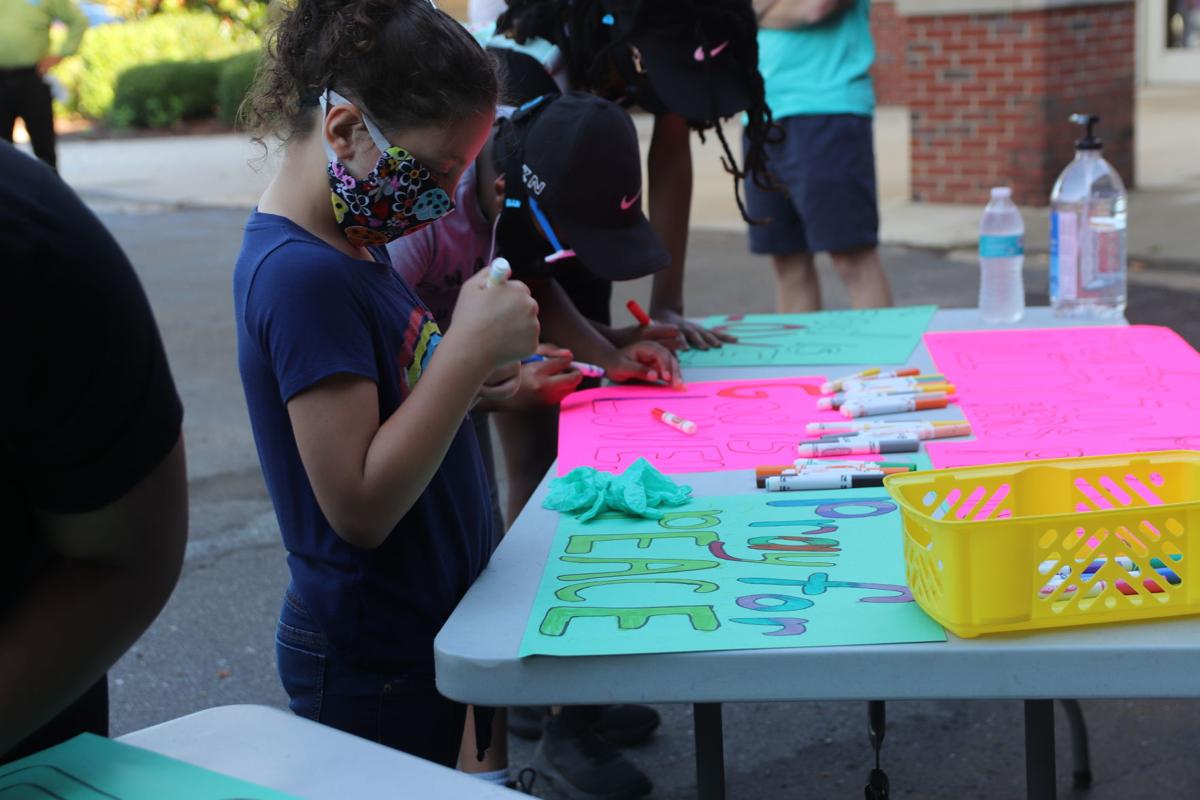 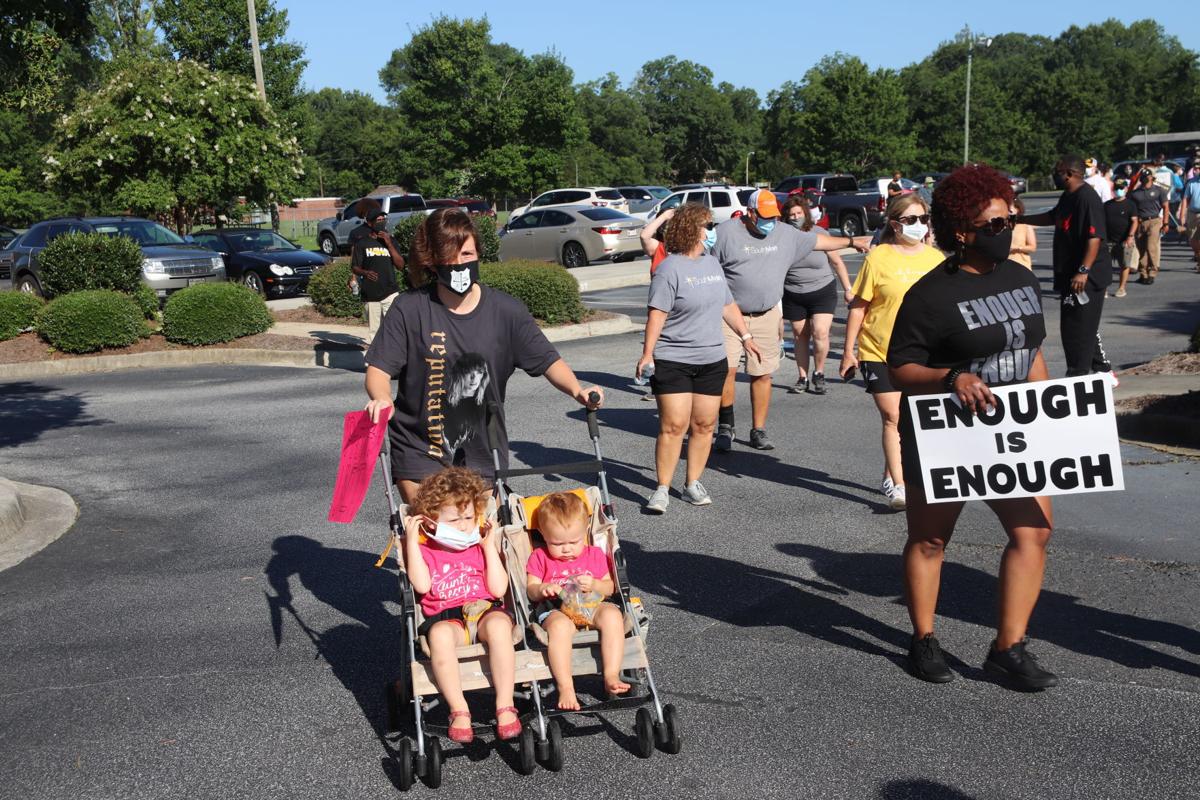 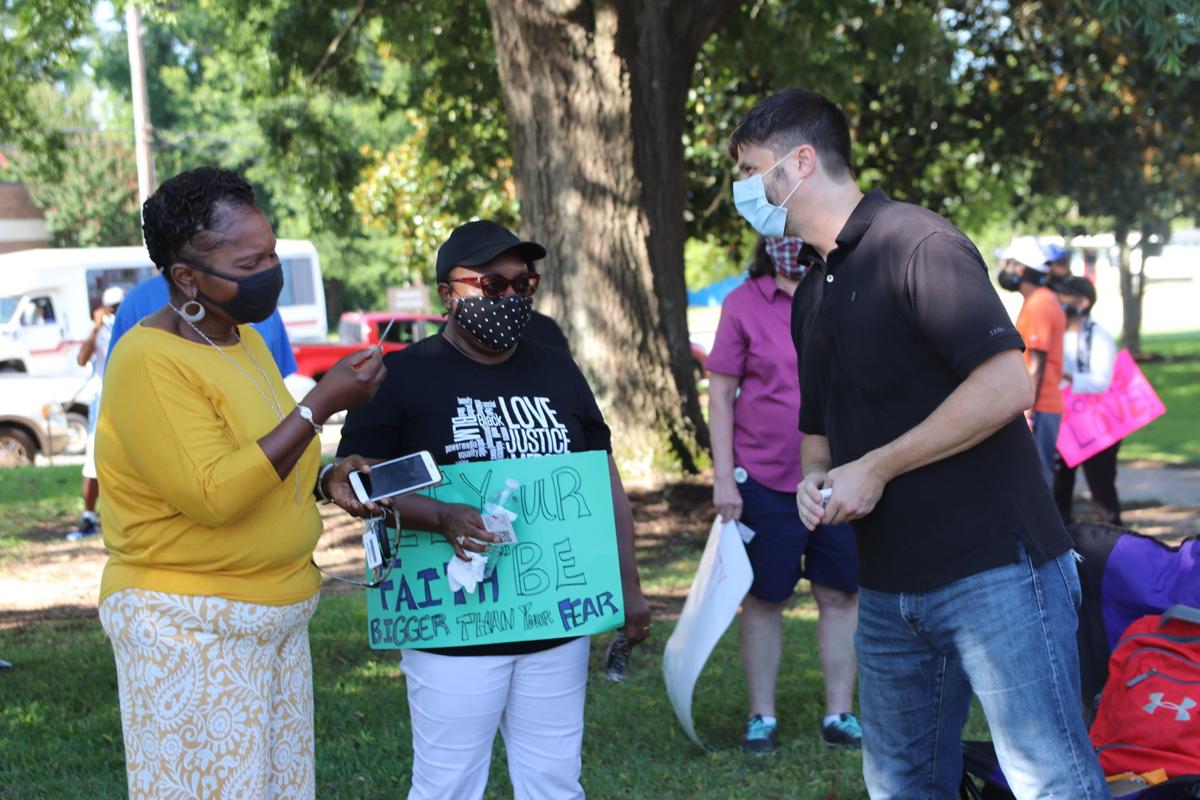 People greet each other on the front lawn of the Greenwood County Courthouse during the Faith for Black Lives Peaceful Protest Rally. 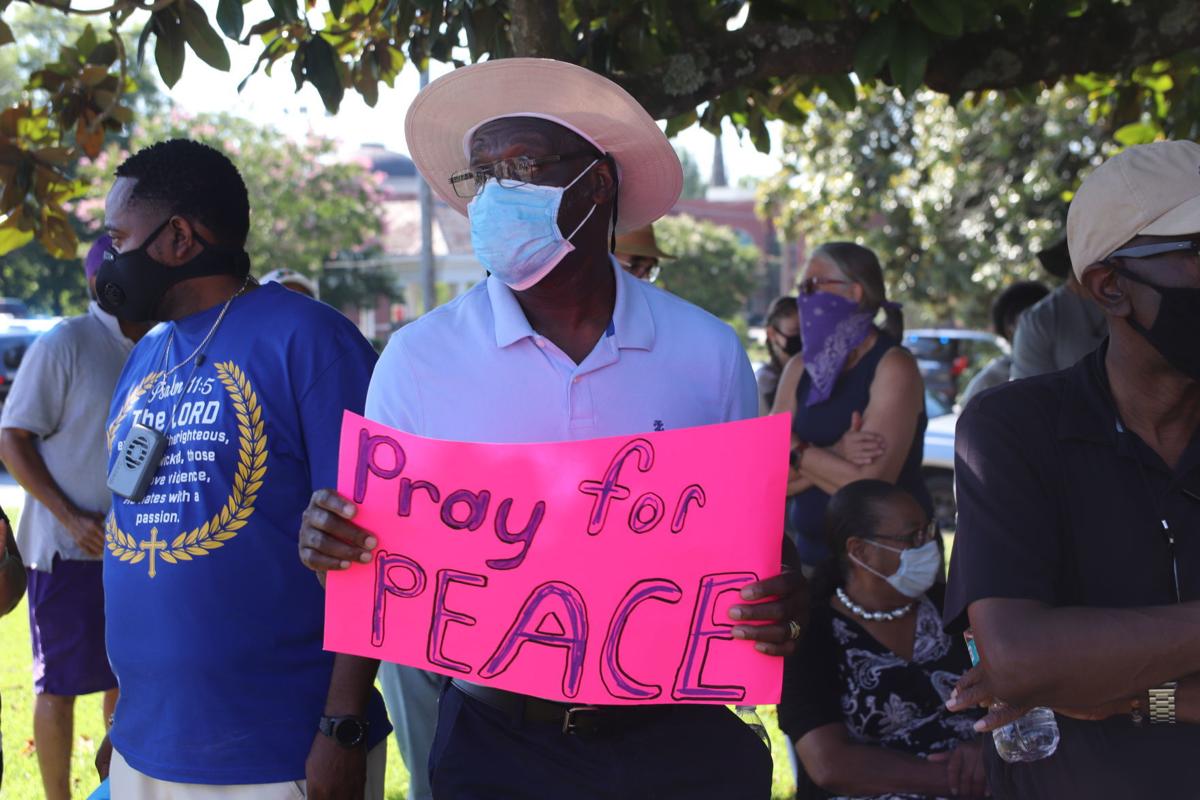 Many people made signs for Saturday's unity march and rally. 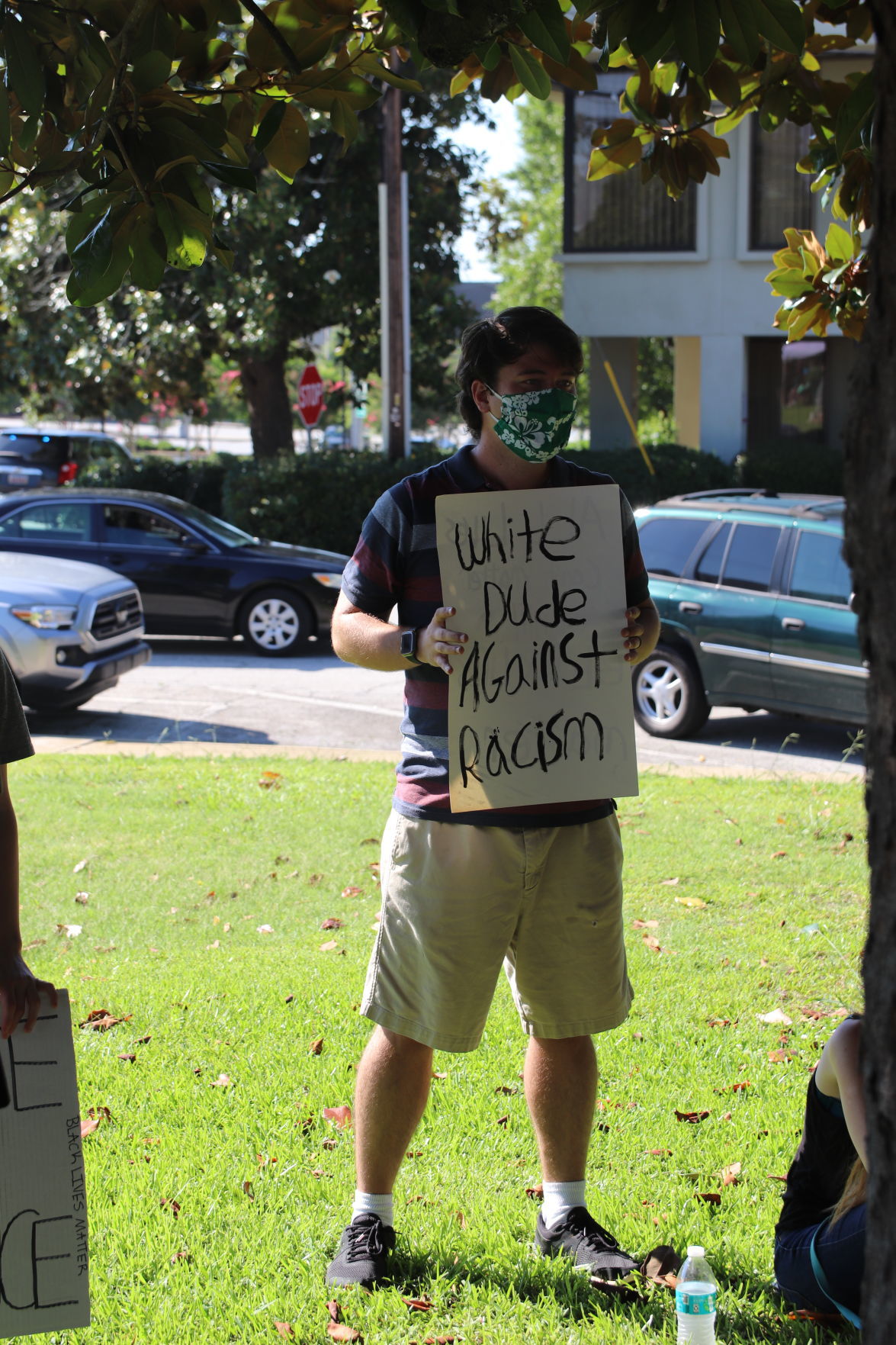 Many people made signs for Saturday’s unity march and rally.

People march from South Main Baptist Church up Main Street on Saturday to the Greenwood County Courthouse for a Faith for Black Lives Peaceful Protest rally.

People greet each other on the front lawn of the Greenwood County Courthouse during the Faith for Black Lives Peaceful Protest Rally.

Many people made signs for Saturday's unity march and rally.

Many people made signs for Saturday’s unity march and rally.

Pastors are used to mission work.

Saturday was no different, but the Faith for Black Lives Peaceful Protest Rally presented a particular mission with three specific goals: unity, equality and justice.

“I hope this walk and this journey doesn’t end today,” said the Rev. Toby Frost, pastor at South Main Baptist Church, as he talked to the people gathered for a march.

Frost’s church was the staging area for one part of Saturday’s event. The first was the march from the church down Main Street. The other was a rally at the Greenwood County Courthouse. City police cars led the way as marchers headed from South Main Baptist to the steps of the courthouse.

Dozens of area faith leaders joined residents and political leaders during the march and rally. The rally, which featured rousing speeches by a number of dignitaries, pastors, legislators, the mayor and others, was the bookend for the early morning event. Not lost on the crowd — or on some of the speakers at the courthouse — was the Confederate monument just feet away that Black Lives Matter Greenwood recently protested.

People from across the Lakelands gathered first at the church, which set up a sign-making station for those in the march. Young kids joined adults in making colorful signs with words such as “unity,” “peace,” “pray” and “justice.”

Dozens of faith leaders mingled with the crowd of marchers, who wore protective face masks because of the COVID-19 pandemic.

“Some of the AME pastors initiated this, but it’s become a whole community event, involving churches from every denomination and every race, language and ethnic group,” Frost said. “We’re just proud to be the beginning point of it. It’s pretty much just uniting Christians of all stripes and colors under the banner of Jesus Christ.”

The march and rally were in response to the friction between law enforcement and the Black community following high-profile deaths of unarmed Black men by white officers across the nation. In the wake of those deaths, much attention has been paid to monuments of Confederate generals, officers and slave owners of the past.

“We know what’s been going on in our society,” said pastor Jerry Brown of Jacob Chapel Baptist Church. “This is a unity walk where we can all come together as brothers and sisters, no matter what the race, because we all have something in common. It’s to come together and communicate with one another — what my issues are and what your issues are. If we do that, we can make it better for everyone in the community.”

The Rev. Wilmar Burroughs, pastor of St. Mary Baptist Church in Due West, said, “We’re out here today because black lives matter. It’s to let the people in the world know, and the community know, it is a serious thing. We need to refocus. By us coming together, it brings our congregations together, which also brings our communities together. This is not a black or white issue. This is all about doing what is just and right.”

Clyde Cannon, pastor at Hosannah Baptist Church in McCormick, said God wants abundant life for all of his people.

“And in abundance, everybody ought to have a sense of peace and justice,” he said. “As we look at what is going on in the world today, there’s a lot of corruption. I’m here to give support to a cause that we might live abundantly.”

Mark Sheard, associate minister at Dunn Creek Baptist Church in Ware Shoals, said “unity” was the main reason he came to the march and rally.

“We’re trying to stop the violence among ourselves, within the community, so that black lives matter,” he said. “With everything that is going on in the country now, we just want to make sure that we all get the same equal treatment as everybody else.

“As faith leaders, we are of one accord, as the Bible calls us to be. We can show that we can all work together, live together and coexist — and have the same privileges and rights as anyone else.”

He said he hopes, at the end of the day, “myths involving racism” are curbed.

“We need to get the community to know that black lives do matter, and that we need to come together and try to work this thing out,” he said. “The main thing we can do as Christians in the church is to pray for each other. We put God first in everything we do. We’ve got to turn away from our wicked ways.”

Felicia and Terrence Miller, both Greenwood residents, joined in the march.

“I think it’s just important for everybody to understand that we’re all here for the same purpose,” Felicia said. “We’re all created equal. Nobody is above anybody else. We all just want to live in peace.”

She liked seeing all the pastors at the event.

“It brings the community together when you have pastors from different churches working together for a greater cause,” she said.

Terrence said he wanted the community to see him publicly supporting the fight for unity, equality and justice.

“We can make this community and country a better place,” he said.

Marcial Little, a Greenwood resident who brought a bullhorn with her, took part in recent Black Lives Matters protests in Uptown Greenwood.

“I want justice and peace for everybody,” Little said. “When they can say black lives matter, then that’s when all lives will matter.”

She was thrilled to see all the pastors involved.

“That’s so unique that they are going to stand up for what they preach every Sunday in church: justice, peace, love and faith,” Little said. “If you’ve got faith in God, that’s all you need.”

Danny Webb, pastor Old Mt. Zion Baptist Church in Ninety Six, said it is crucial for the faith community to come together to show that “we’re unified through Christ and that we are coming together to support our government and support our police officers to address the issues of our community.”

“We’re not coming to be radical,” Webb said. “We’re coming to be unified and exhibit the character of Jesus Christ. In coming together, we want to be proactive rather than reactive in addressing the issues that are plaguing our communities right here in Greenwood and surrounding areas.”

Abbeville-Greenwood District of AME Church presiding elder the Rev. Derrick Scott said bringing faith leaders together for the primary purpose of promoting unity in the community is an important step.

“We see that there’s a need,” he said. “There’s been a change in the world, and we need to make sure that change starts on a local level, to bring unity, to bring equality and to bring justice into the areas where we serve.

“We all have to live here together. Our purpose is to bring a body of faith-based believers together so that we can impact the entire community. Once upon a time, every decision that was made started at the church. So, if the church is on the latter end, we need to be on the front end and bringing a change in Greenwood County.”

In addition to the numerous speeches on the courthouse steps, there was a chance to register to vote. Rally organizers brought plenty of water and handed bottles out to thirsty marchers on what was a steamy morning.

Greenwood Mayor Brandon Smith, who joked that he had to follow an impassioned speech by Greenwood County Council Chairman Steve Brown, said he was humbled to be at the event.

“We have some powerful, positive energy in Greenwood,” Smith said. “I’m excited about how those voices can help bring about long, overdue, constructive and realistic changes.”

AP WAS THERE: 1976 Montreal Olympics

Protests in Beirut amid public fury over massive blast

Bottas on pole for Silverstone GP ahead of teammate Hamilton