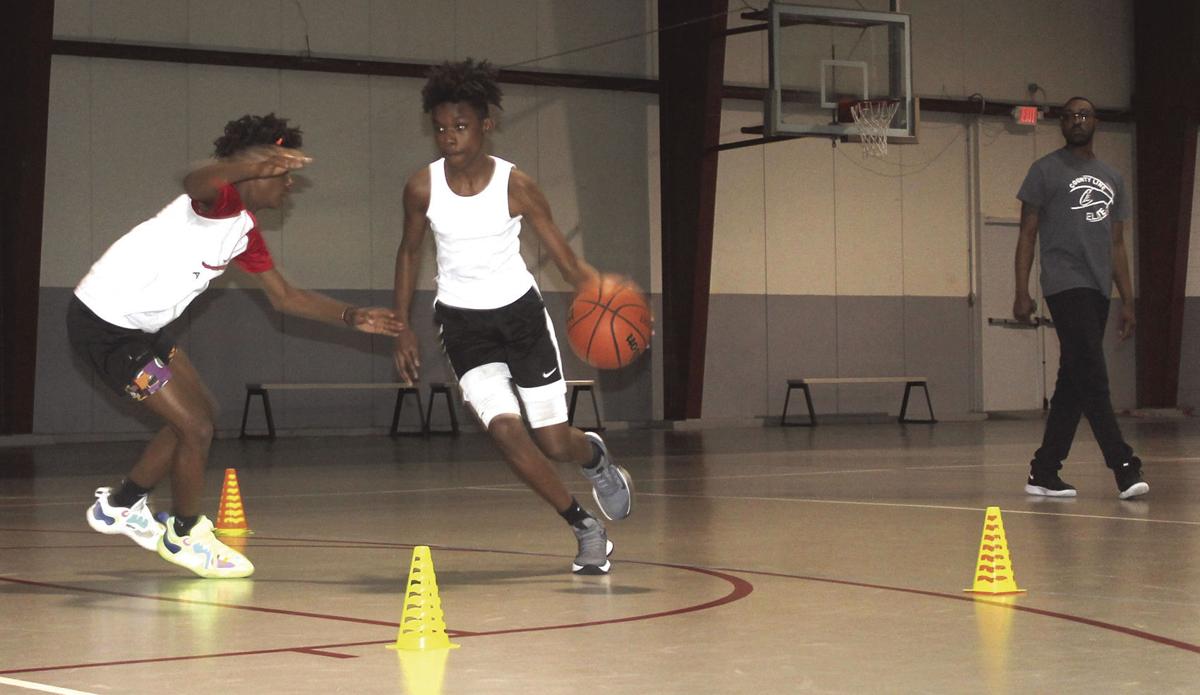 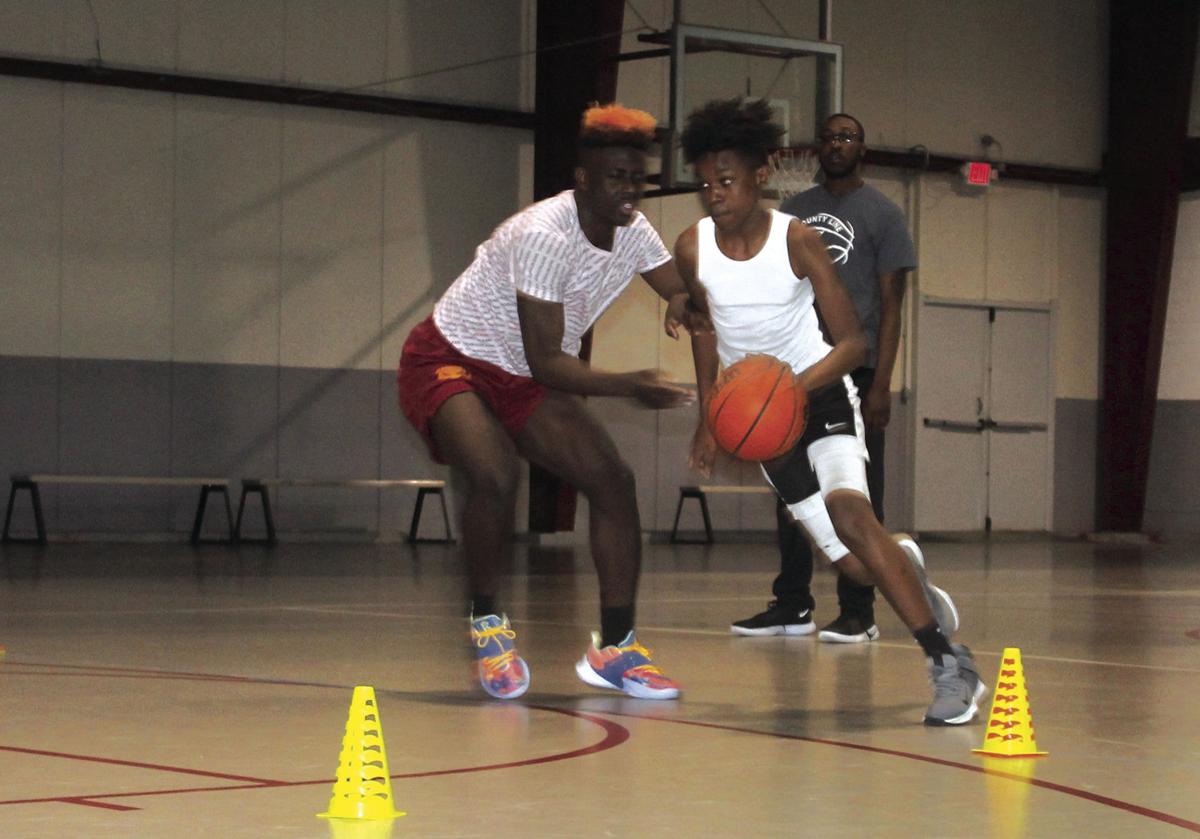 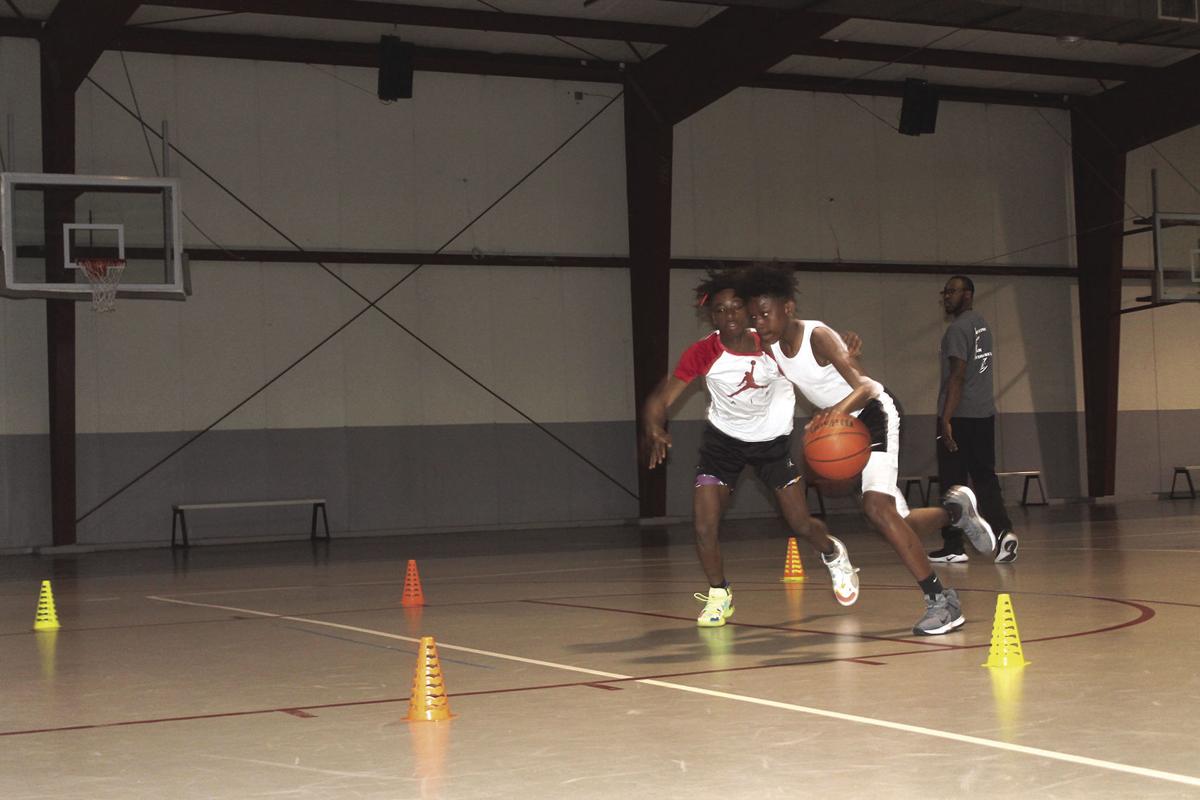 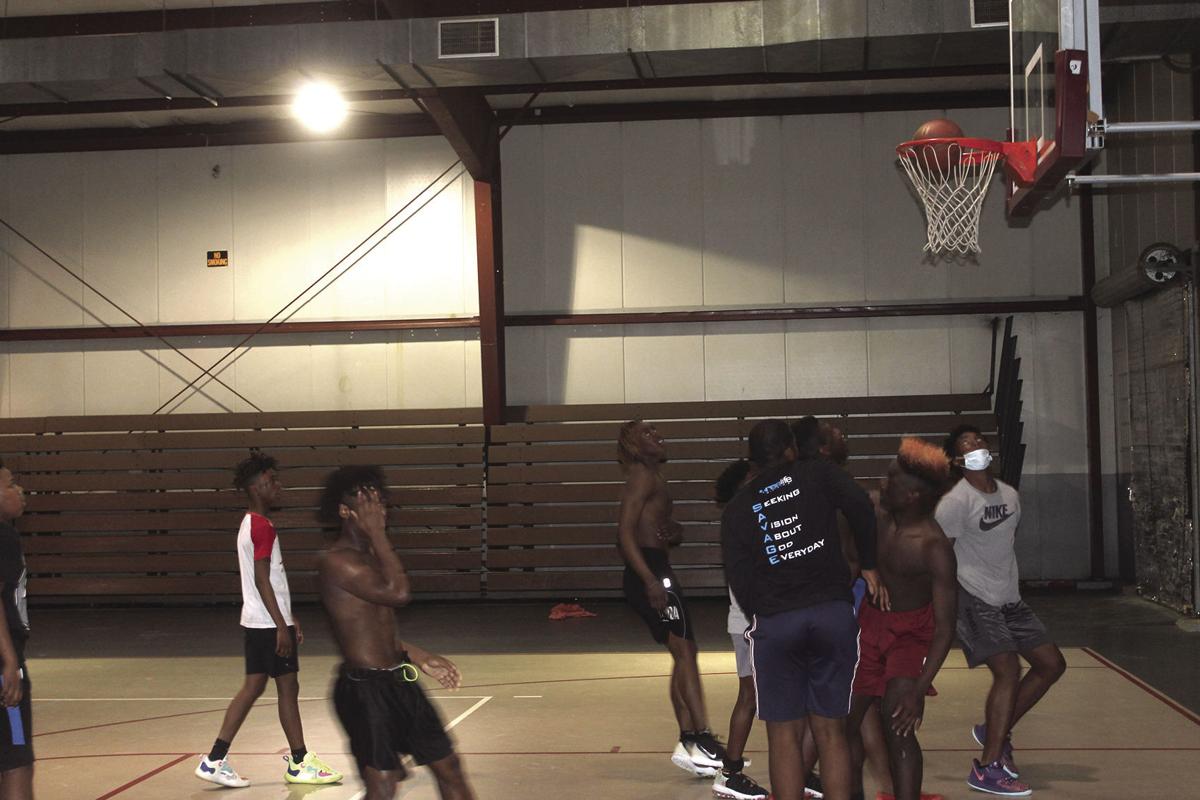 Teamwork and practice pay off as a ball goes into the basket during a recent practice for youths with County Line Elite. 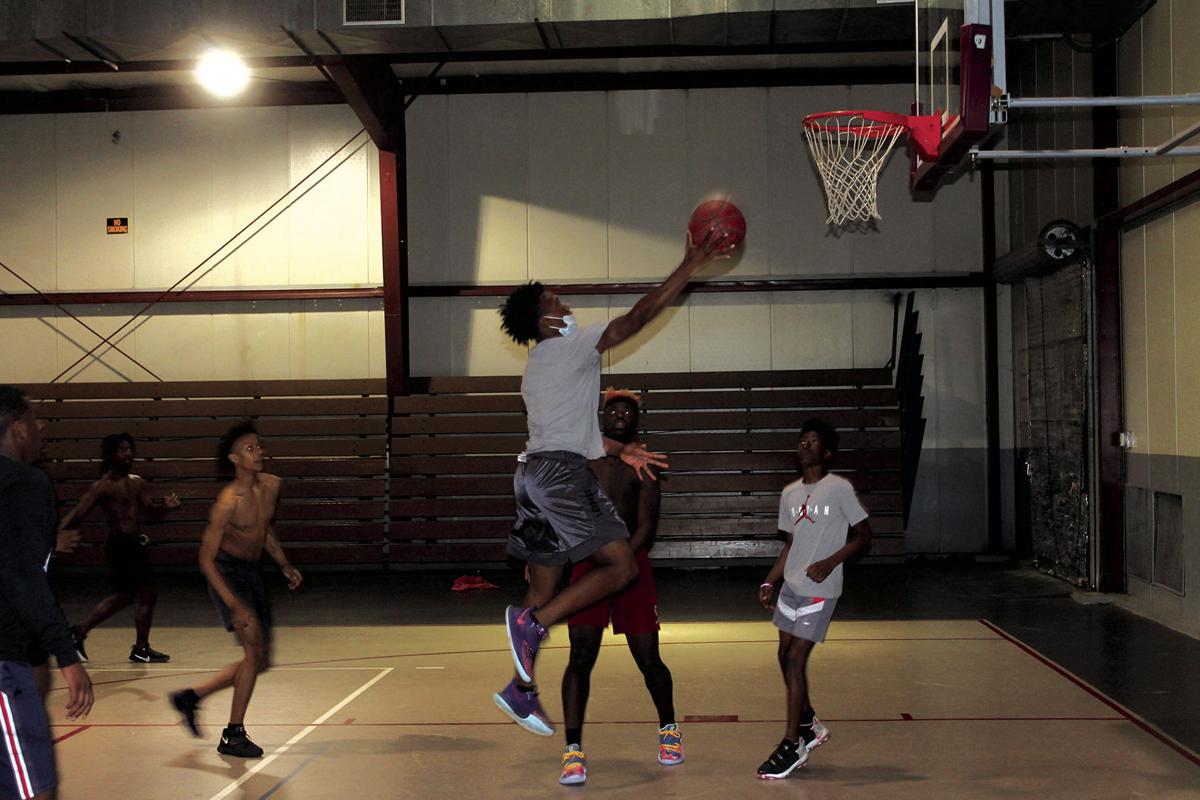 A teenager puts his lessons to use during a practice at the Abbeville Civic Center. 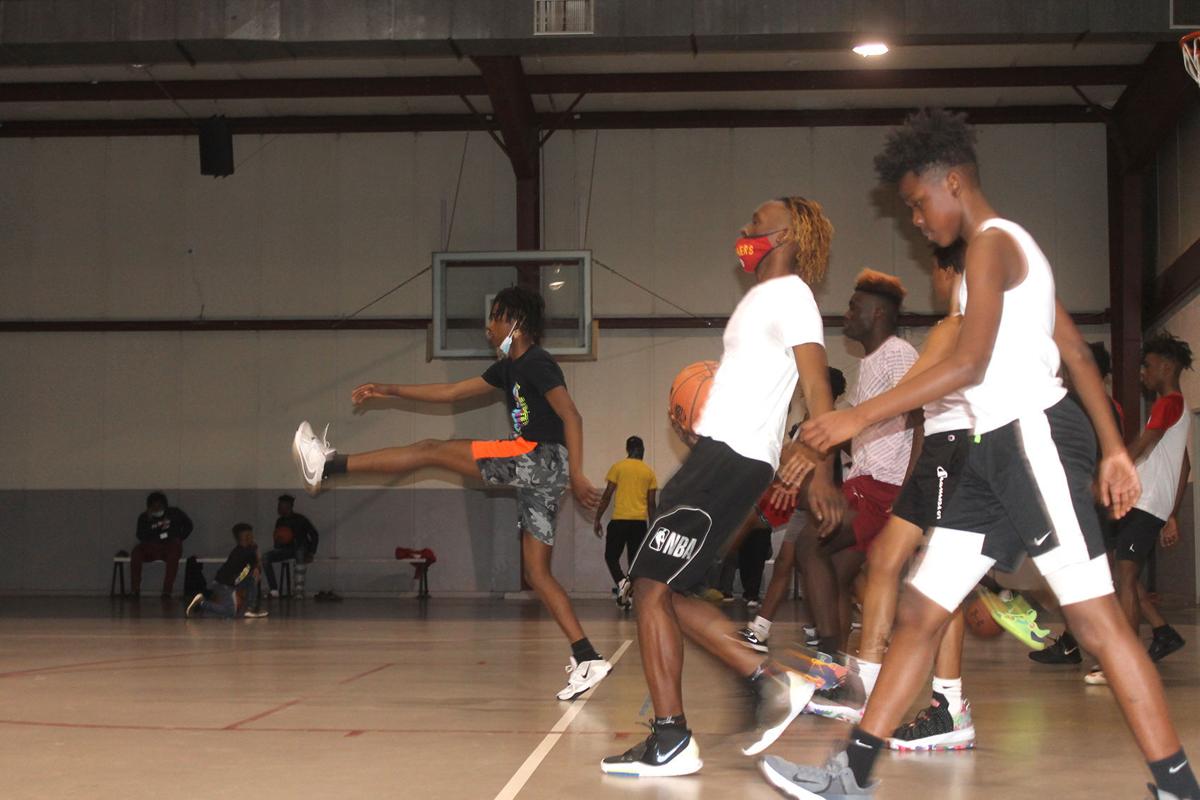 Students with County Line Elite participate in a warm-up during practice at the Abbeville Civic Center.

Teamwork and practice pay off as a ball goes into the basket during a recent practice for youths with County Line Elite.

A teenager puts his lessons to use during a practice at the Abbeville Civic Center.

Students with County Line Elite participate in a warm-up during practice at the Abbeville Civic Center.

Two young men face each other, more sweaty than either wants to admit, huffing for air as neither has entirely caught his breath.

One teen feints forward with the ball, trying to get the other to commit to movement; the other isn’t fooled. Then one teen explodes into motion, heading right, then turning around to run to his left, toward the basket. He raises his arms to shoot and — misses.

“Get yourself together, son,” says Jamal Washington to a youth doing footwork drills during a recent practice at the Abbeville Civic Center. He and Dexter Baylor probably repeat themselves often through their work with County Line Elite.

Washington and Baylor had worked for years in recreation and travel leagues with youths of all ages, but wanted to do something more.

“It was a vision we had for last the last two to three years, Washington said. “We stepped out on faith and tried our luck.”

County Line Elite (CLE) refers to the goal of working with young men and women from all across the county, not just in Abbeville and Calhoun Falls (where Dexter worked), they said. The organization aims to be an outlet for children in surrounding counties.

CLE is a nonprofit group that aims to build up youths through sports.

“It’s a mentoring program, keeping teens off the streets,” Washington said. “There’s a lot of unnecessary stuff in the streets. CLE’s goal is to make an outlet for the teens.”

CLE tries to let children come to them and won’t turn anybody down.

“We don’t recruit because kids are in other programs,” Washington said. “We are not trying to step on anybody’s toes.”

ELITE stands for “Elevating Lives In Tough Environment,” he said. If that sounds like a slogan that could be on the back of T-shirts, you would be right. It is, Baylor and Washington said. The T-shirts are sold to help pay travel expenses. Eventually, the pair hope to buy a van to transport youths to various events. For now, CLE relies on parents and family for transport.

CLE has been active for two years. Washington and Baylor admitted COVID-19 stifled their plans. Students only played one tournament last year; usually, CLE participates in up to eight tournaments.

Action wasn’t stifled at the civic center. Outside, the parking lot was nearly full of vehicles with parents, while inside a few fathers watched the youths perform various drills and even perform a few plyometric routines as Washington, Baylor and volunteer coaches looked on.

“Few look at sports as teaching them life lessons,” Washington said. “That’s what made me the man I am today. We’re just trying to give back.”

Each day brings something new to learn. It’s hard to keep everybody happy even if they are all a family, Baylor and Washington said. Part of the task is to learn how to communicate with each other, and learning how to relate to the kids.

Relating is different from when they were coached, they agreed. Back then, they had someone like an Army coach who would be in their face. You can’t do that now; kids don’t react well to that, they say.

Youths have definitely improved, Washington and Baylor said, noting that they have coached most of the teens since they were little.

“Everybody has improvement; you can see it. That’s what makes me smile. That means we’re doing our job and you’re doing your job,” Baylor said.

“We get joy out of watching kids who didn’t know how to dribble, watching them learn,” Washington said.

Winning is not the main goal of the program. While the wins are good, they said the joy comes from watching the kids have fun. That is where they can see the kids grow.

As important as sports can be, they are not the focus of CLE. Baylor and Washington said the group has provided tutoring since last year. Up to four students are receiving lessons in English, math and science.

During the holiday season, CLE gave out gifts to people in nursing homes, Baylor said. CLE also hosts trash pickups every two to three months in Abbeville and Calhoun Falls. Another trash pickup is scheduled for late April. At Easter, youths helped with an Easter egg hunt.