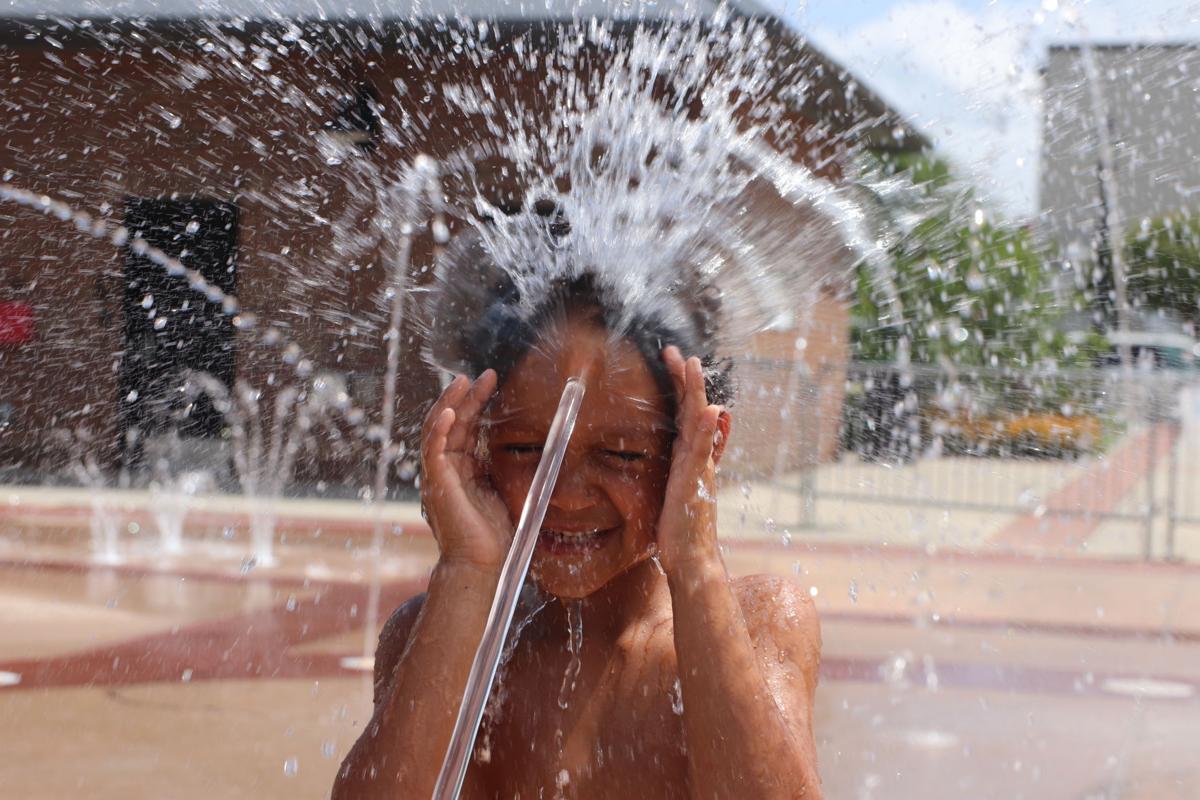 Deighton Elliott, 5, plays in the water Saturday at the Uptown splash pad. 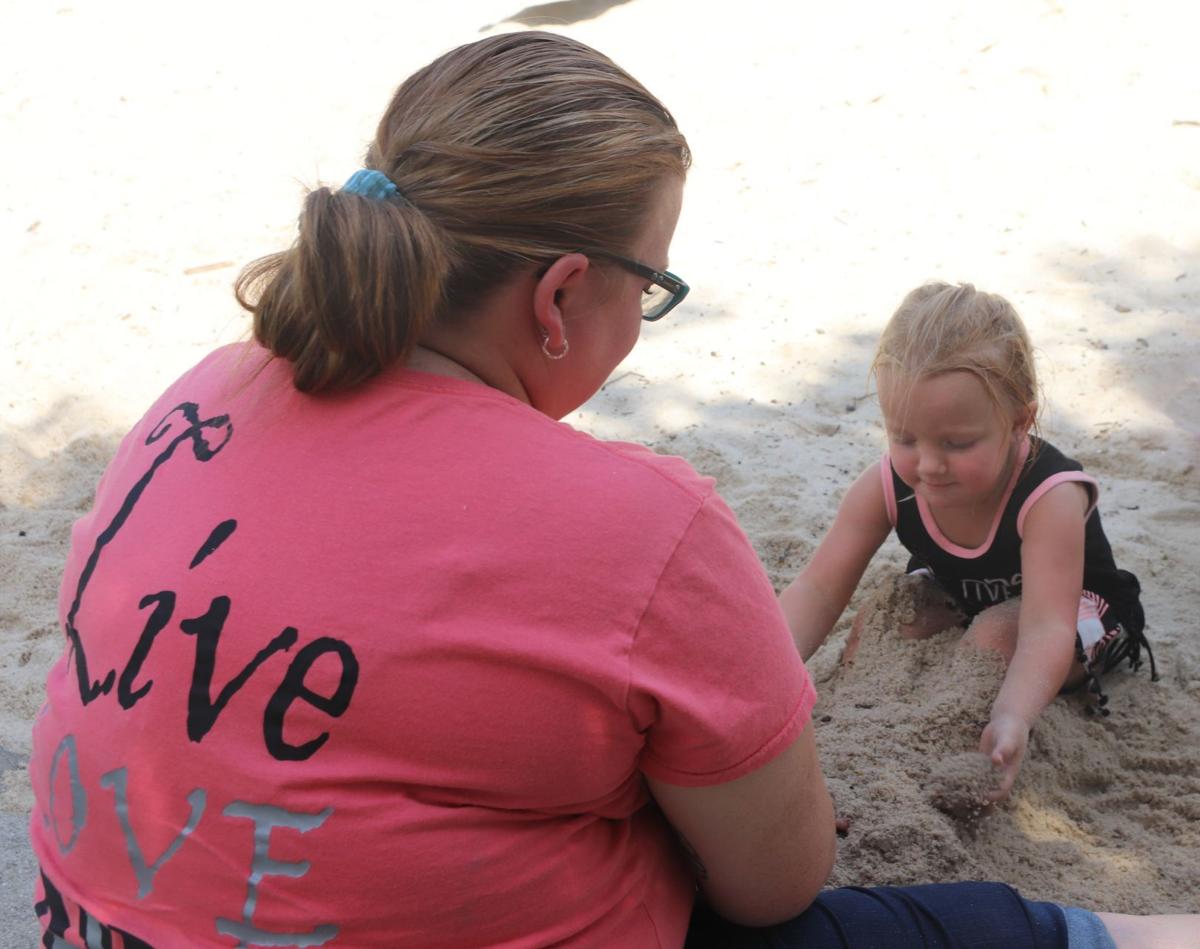 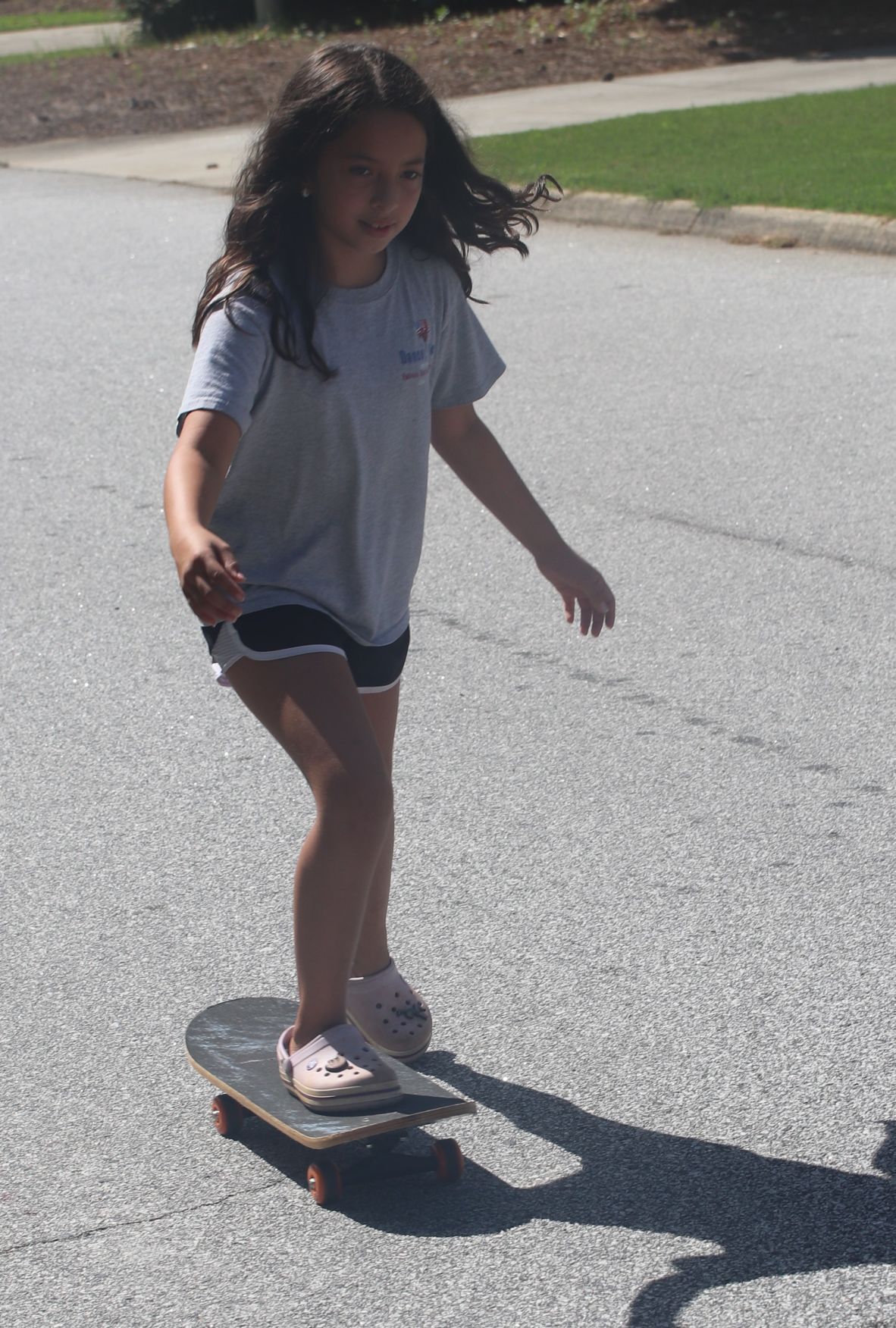 Ava Rodriguez, 9, rides a skateboard Saturday in the Centre Court neighborhood in Greenwood. 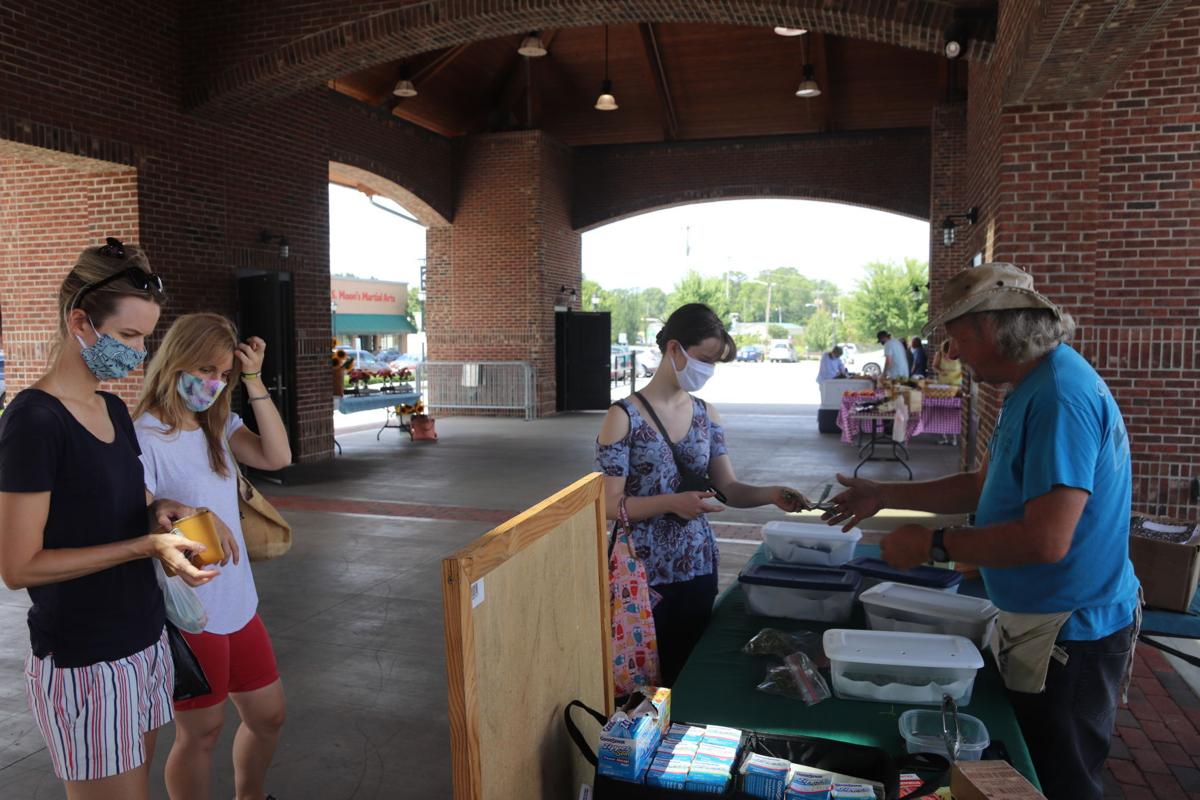 Vendor Cliff Hale, right, of Grown-n-Green Aquaponics sells an item to Melody Johnson as, from left, Jean Thrift and Laura Martin look on Saturday at the Uptown Market. 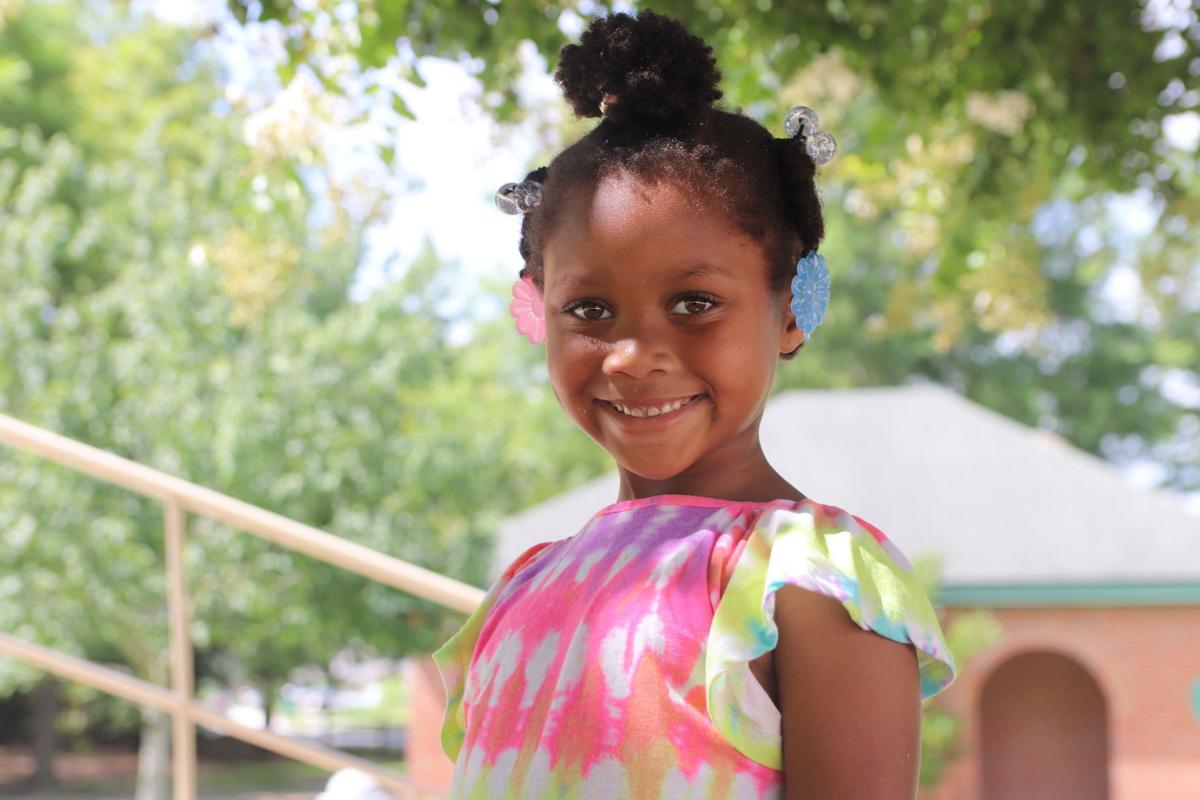 Harmony Tenet, 5, stops for a moment while playing Saturday at West Cambridge Park.

Deighton Elliott, 5, plays in the water Saturday at the Uptown splash pad.

Ava Rodriguez, 9, rides a skateboard Saturday in the Centre Court neighborhood in Greenwood.

Vendor Cliff Hale, right, of Grown-n-Green Aquaponics sells an item to Melody Johnson as, from left, Jean Thrift and Laura Martin look on Saturday at the Uptown Market.

Harmony Tenet, 5, stops for a moment while playing Saturday at West Cambridge Park.

As summer starts to fade into fall, people were out and about Saturday in Greenwood — enjoying the warm, sunny day and participating in a plethora of activities.

You hardly recognized signs of a pandemic, save a few masks and bottles of hand sanitizer.

Carla Bryan and daughter Ava Rodriguez, 9, were enjoying a late morning in the Centre Court neighborhood of Greenwood. The two noticed some new ducks on the pond and fed them, then Ava rode her skateboard while mom and the family dog hung out in the shade under a tree.

“We’ve been doing a lot of outdoor activities, mainly just mother and daughter,” Bryan said. “We’ve been going to the civic center a little bit and to the state park. Sometimes we’ll go Uptown, and she’ll skateboard there also. We’re about to go hide rocks for Greenwood Rocks.”

Ava is a student at Merrywood Elementary School. Her mom has prepared as Ava gets ready for a new academic year. Greenwood County School District 50 is offering several options, including virtual school. That’s the option Bryan chose for Ava.

“We just bought a new loft bed that’s got a desk made up under it, so she can do her homework from there,” Bryan said. “She’s going to have a whole little station where she does her schooling at.”

Liegah Steele and daughter, Chloe Dicola, 3, joined a few others during the morning at West Cambridge Park. Chloe was playing in the sand as her mom sat on the edge of the sandbox.

“I think they are going to keep on doing what they are doing,” she said of the daycare.

The COVID-19 pandemic put Steele out of work for three months when she was working at O’Charley’s. She now works at Publix.

“I’ve got to wear a mask to work every day now,” she said. “I had a reaction on my face to it. I had to go to the dermatologist to get medication. I’m hoping it lets up because I feel like the mask could be a health risk.”

Tonya McDuffie was at the park with granddaughter Harmony Tenet, 5. McDuffie said her job at Colgate Palmolive wasn’t affected by the pandemic.

“It’s been going good,” she said. “I stay cautious at all times.”

McDuffie held a bottle of hand sanitizer while she spoke, even though she said she hasn’t been concerned about the virus.

“It’s like a normal cold or flu,” she said. “You’ve just got to take care of yourself and do what they ask you to do. Me and my granddaughter have been coming to the park. I come out here early in the morning when there are not too many people.”

Melody Johnson joined two of her friends — Laura Martin and Jean Thrift — at the Uptown Market. All three were wearing masks. Melody and husband, Will, both work at Lander University.

“We’re doing the best we can to social distance even while at work,” Johnson said. “We’re wearing masks and things like that. Personally, for me, it’s encouraging to remember that it is one of those things that we see something greater than ourselves, because it is a hard time. Knowing that we’re not in control, but God is, is something that my husband and I have been really encouraged by.”

Johnson said she hadn’t seen her friends in several months because of the pandemic. She was happy the market was open.

“We noticed that the market was open and felt that we were able to social distance while getting some great local produce as well,” she said. “We’re still being super cautious.”

“This is one of the only things open that doesn’t require a mask right now,” Kimmell said. “And it’s hot.”

She said the two have mostly spent the summer at the pool and playing in their backyard. Like others, Kimmell and her husband, who both work for BMW in Greenville, were out of work for several months. They returned to work this past week.

During the off-time, Kimmell worked for Instacart, a grocery delivery service.

“I was doing that just to get by,” she said.

Now she has new concerns as fall approaches.

“It will be his (Deighton’s) first year in kindergarten, and I’m scared about what it’s going to look like for him because everything is going to be so different,” Kimmell said.