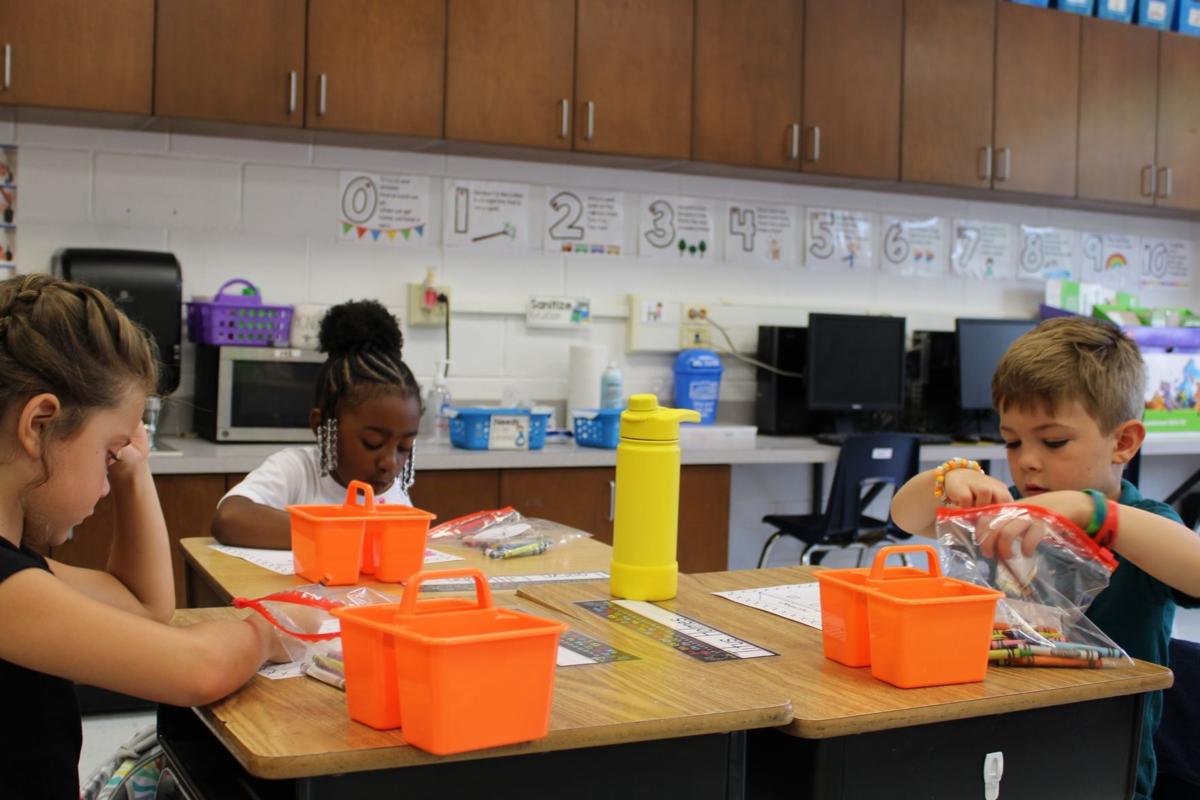 Kindergartners at Hodges Elementary spent part of their morning coloring. 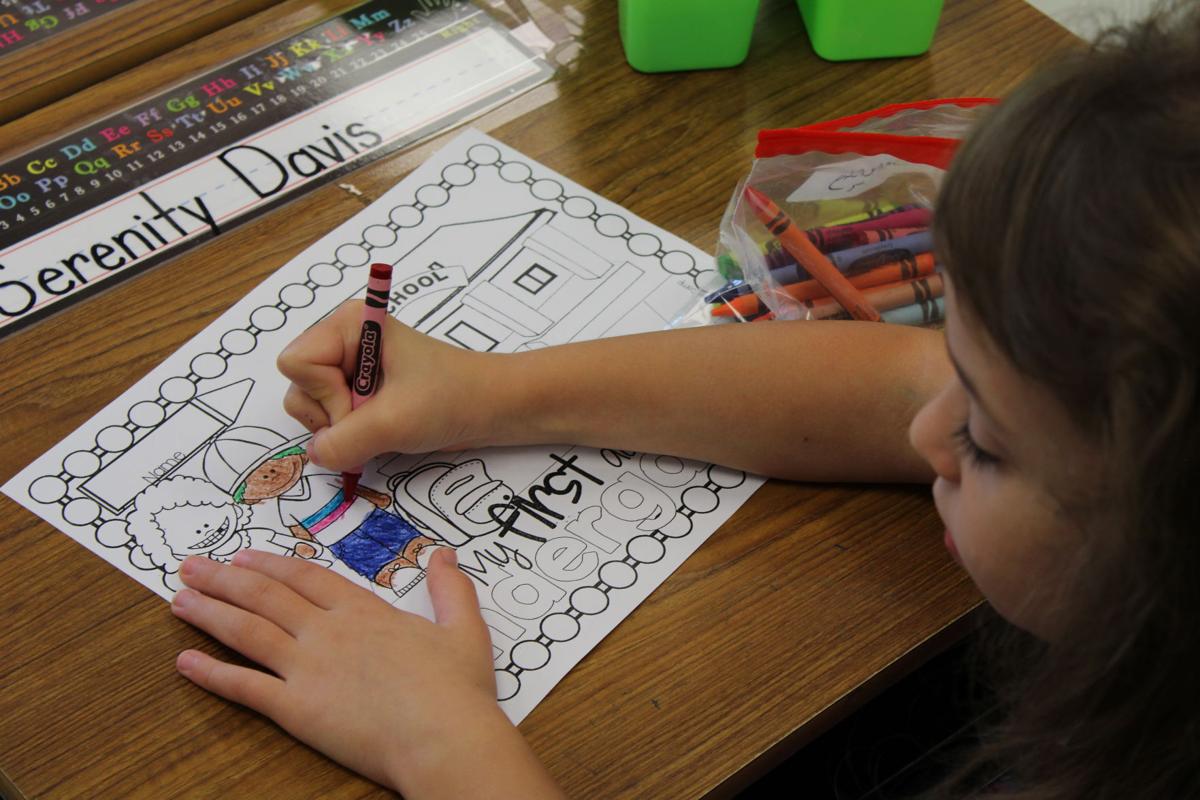 A kindergartener at Hodges Elementary fills in a coloring page on the first day of school. 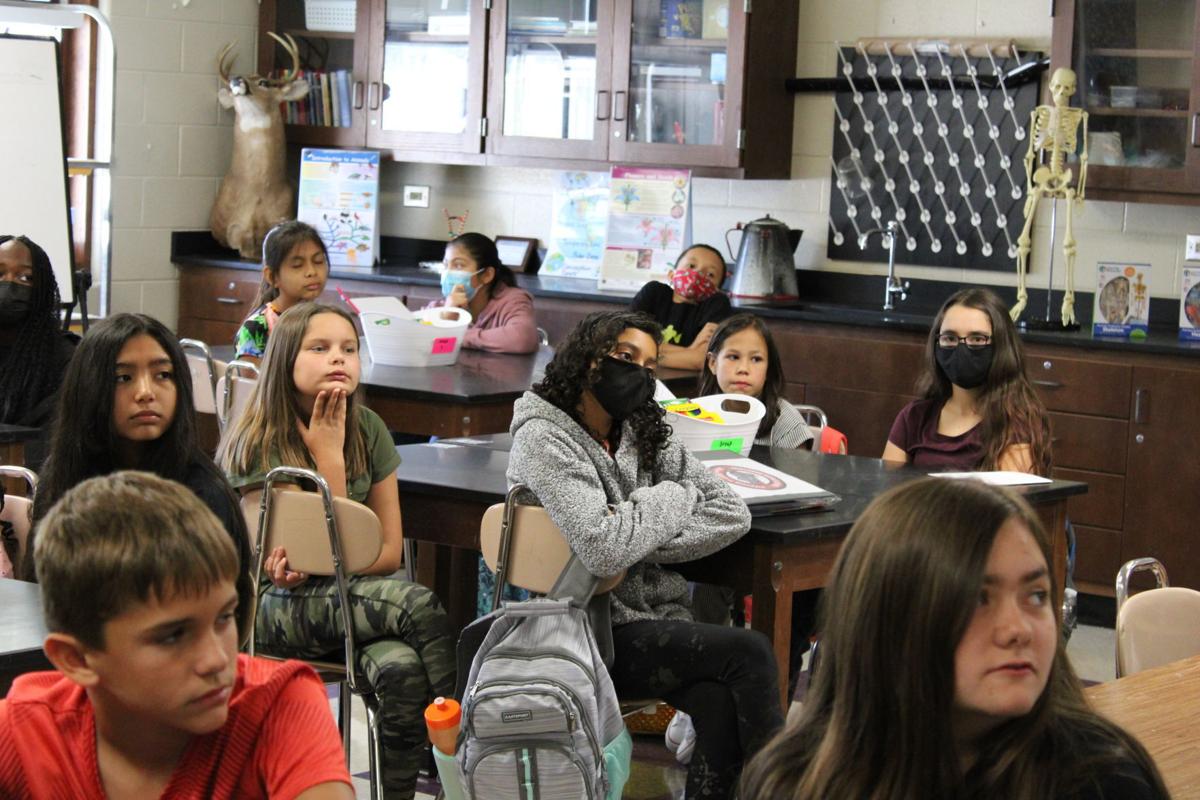 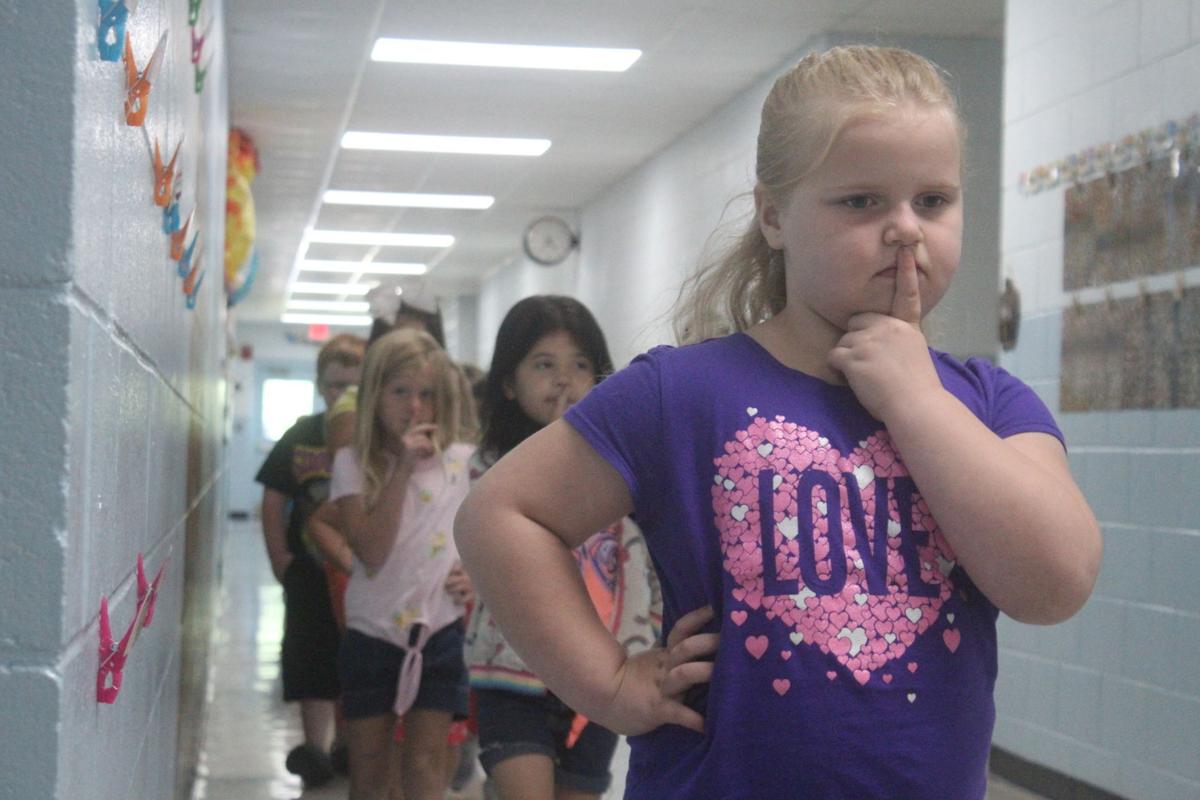 Students at Ware Shoals Primary School already mastered walking quietly down the halls by the first day of the new school year. INSET: Ninety Six Elementary Principal Charlene Louden assists students being dropped off for their first day of school. 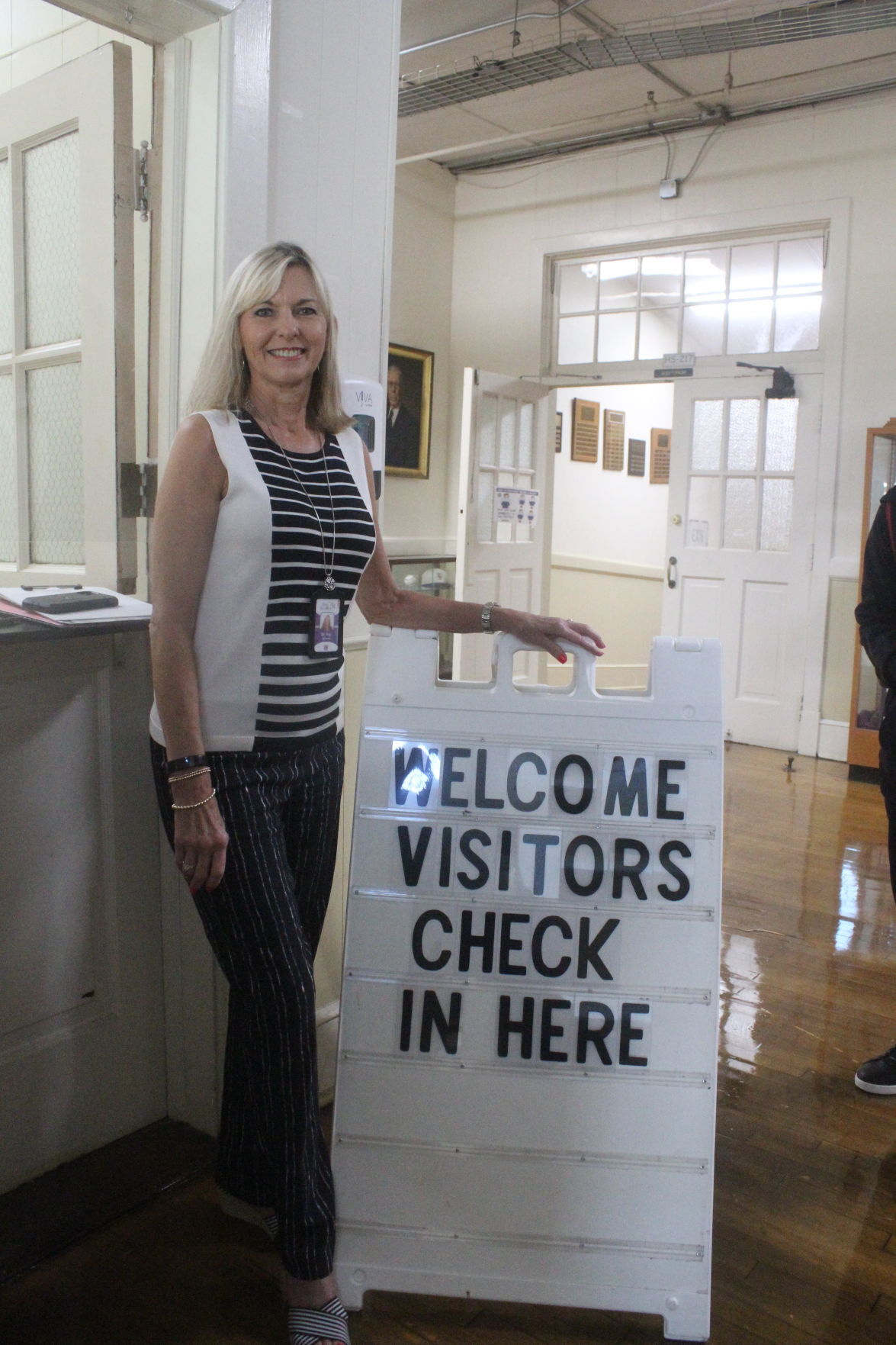 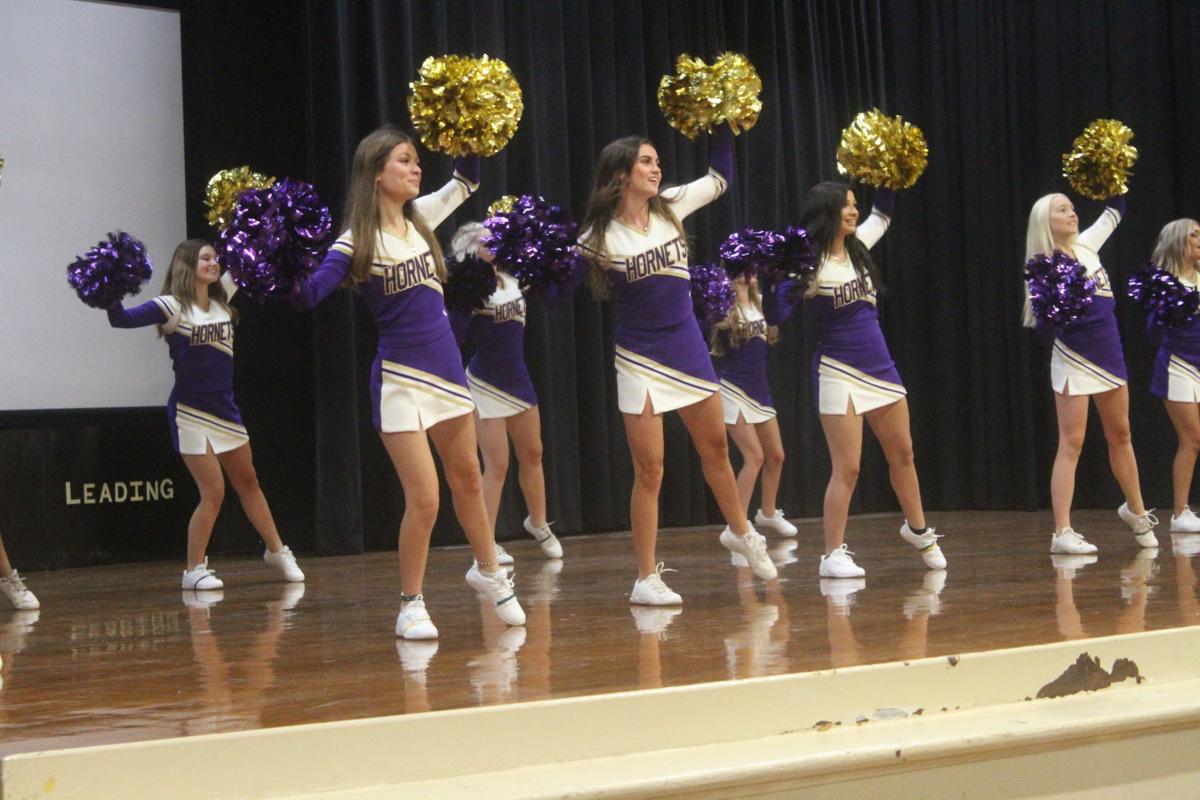 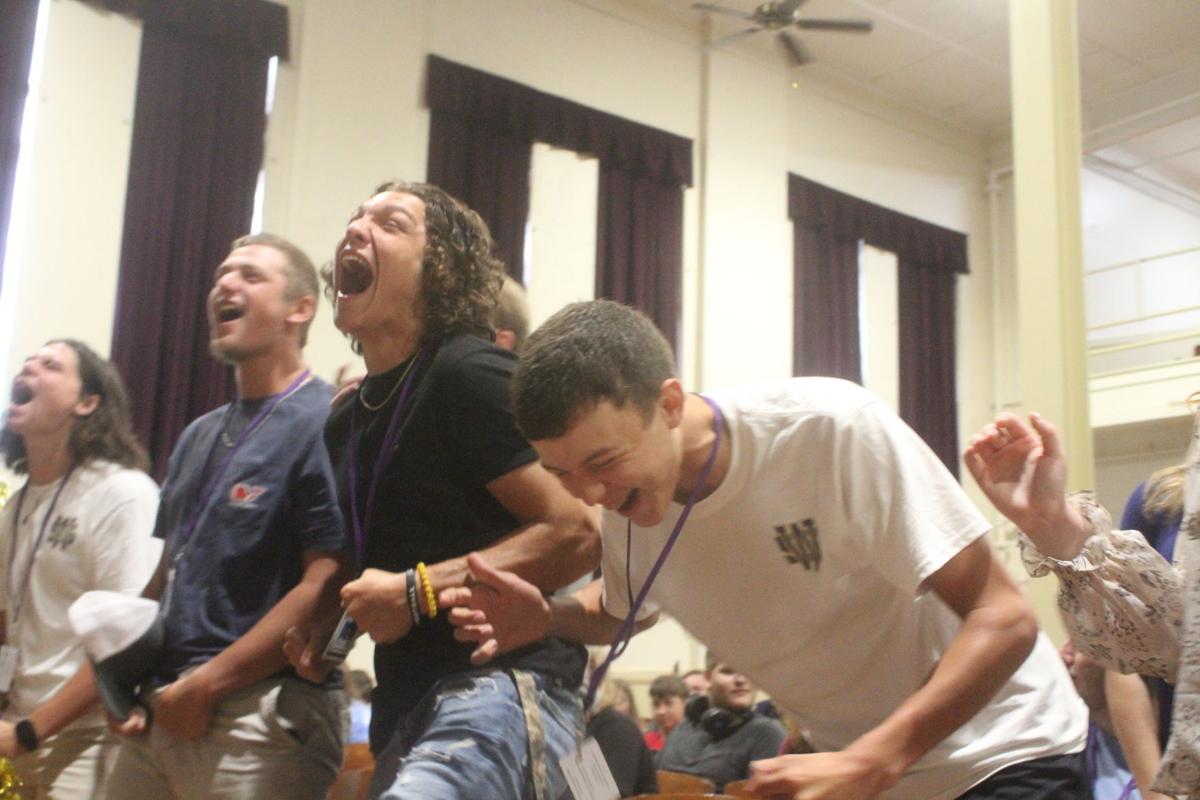 The seniors at Ware Shoals High School won a spirit contest at a pep rally Thursday, cheering the loudest in celebration of the first day of this school year.

Kindergartners at Hodges Elementary spent part of their morning coloring.

A kindergartener at Hodges Elementary fills in a coloring page on the first day of school.

Students at Ware Shoals Primary School already mastered walking quietly down the halls by the first day of the new school year. INSET: Ninety Six Elementary Principal Charlene Louden assists students being dropped off for their first day of school.

The seniors at Ware Shoals High School won a spirit contest at a pep rally Thursday, cheering the loudest in celebration of the first day of this school year.

There was a buzz around Greenwood County on Thursday. It emanated from the county’s public schools, which welcomed students back from summer.

The schools teemed with activity. High school students clutched class schedules trying to figure out what hallway their next class was on. Elementary and high school students danced their hearts out in PE and drama class. Kindergartners got their first use out of a fresh box of Crayolas.

Nashari Williams, a second-grade teacher at Hodges Elementary, said Thursday morning that she’s looking forward to getting to know a fresh batch of students and helping them grow as learners.

At the middle school level, some students are embarking on a new journey at Northside. The school’s medical magnet program begins this year.

“It’s the implementation year for our medical magnet, and we have a lot of fun activities planned and schoolwide initiatives that are tied to the medical magnet that we’re going to involve all of our students and make our whole student body feel like they’re part of our new magnet program,” Northside Principal Jim Still said.

Also new this year is the modified calendar, which Districts 50, 51 and 52 each adopted. School began a couple weeks earlier than usual, but students and teachers will have an additional break after each nine-week period.

“I love the fact that the modified calendar gives us an opportunity to kind of break in between sessions, to catch up some students that need a little bit more focused remediation,” said Emerald High Principal Jamie Blount.

“They’ll be able to get that additional support with teachers in our building, and they’ll also kind of be able to stay on pace with their peers.”

Bre Duncan, an English teacher at Emerald, said she’s excited to be back and to see students and everyone else in person.

Regarding the modified calendar, she said she believes it will be difficult at first, but said the breaks will be beneficial for staff and students.

“It kind of gives you some time to reset and help prevent burnout,” Duncan said.

Years of school lie ahead for many of the county’s younger students, but Thursday marked the beginning of the final push for seniors.

Katelyn Cathey, a senior at Emerald, said the year should be exciting, but guessed it will go by pretty quick. “Kind of sad that it’s senior year,” she said.

She’s most looking forward to cheerleading, adding the coach and teammates are amazing. Her favorite class of the year will “definitely” be Duncan’s English class, she said.

The modified calendar will give fall athletes and marching bands a little more time to hone their skills. At Greenwood High, theater students reunited and danced a number from a previous musical, and ruminated on the performances yet to come.

Thursday just marked the beginning; the students have plenty to look forward to.

Ninety SixWhen students returned Thursday to Ninety Six Elementary, Charlene Louden was there to greet each student at drop-off.

Louden, the school’s principal, welcomed nearly every student by name.

“Are you ready to be back?” Louden asked students as they walked toward the school’s entrance.

Louden was aided in welcoming students back by Josh McDonald, the school’s physical education coach.

“I hope you have a great first day,” Louden said.

“I will,” replied another student.

Louden oversees a school of about 354 students in grades 3-5.

“It feels weird coming back,” one student remarked as he entered the school.

“For me, it’s a typical school year,” Ward said. “We’re going to work hard until the end.”

Ward said he is paid to provide the best quality education that he can.

In his 34th year as an educator, he said he was not sure how to feel about the last first day of school in his career.

“I don’t know anything different,” Ward said. “And it feels weird.”

Ward said the new school schedule will pay dividends both academically and mentally for the students and employees.

Ware ShoalsThe shorter summer didn’t stop Ware Shoals High School’s seniors from showing their school spirit at a first-day pep rally. The school’s cheer squad led an auditorium full of students in cheers, followed by introductions from some of the school’s staff.

“We’re so glad we’re all together, and not on a screen,” said new principal Maria Tyre. “We have a lot of great things planned for you, lots of fun, but that all depends on you.”

Students clutched their new IDs as each grade level was challenged to see if they could cheer the loudest when their class was called. Two “spirit points” were on the line, but the school’s newest class of seniors swept the competition as they leaped and screamed in the front row.

The modified schedule this year cuts the usual summer break short in exchange for two weeks at the end of every quarter. Sprouse said it felt right to be starting school in July, and said she thought the new schedule would help boost academics and students’ retention. It’s also the right environment to establish rapport and build relationships with students.

“Virtual was an okay substitute, of course there was no choice at the time, but there’s no substitute for in-person,” she said.

It was much easier to get students back into the school mindset at Ware Shoals Elementary, said Principal Jason Morrison. They were in the building about six weeks ago, he said, which made for a smooth transition back.

He walked the halls, praising students for walking in orderly lines behind their teachers. He and the staff were all wearing rainbow tie-dye shirts emblazoned with this year’s motto, “After every storm, there is a rainbow.”

“We’re going to show some people what Ware Shoals can do,” he said. “What better theme could we have after everything that’s happened? We’re going to get that pot of gold at the end of the rainbow.”

The breaks afforded by the district’s new schedule give staff the chance to offer remediation for students who might struggle because of learning loss during at-home learning. Returning to in-person events can get whole families involved in a students’ education, making memorable and lasting moments for students.

It’s a year for positivity and boosting students and staff up, Morrison said. One of their students, Mackenzie Sills, has cancer and has shown incredible resilience through her treatments. Morrison said she’s getting instruction from teachers after school — her dedication and love for learning should be an inspiration to every other Honeybee in the Ware Shoals Primary hive.

Pride and legacy take center stage at Ware Shoals Middle School, however, where new Principal Jeneen Webb is carrying the torch of her predecessor. The school’s previous principal, Nancy Brown, ran her school from home for much of the last school year, as she received treatment for advanced cancer. Her fans and supporters, dubbed “Brown’s Brigade,” showed their support through fundraisers selling T-shirts and wristbands to benefit cancer research.

Webb served as a teacher for two years before being hired as principal. Brown hired her.

“After the year we’ve had, everything we’ve been through in the pandemic and beyond, we need to know there’s still hope,” she said. “She’s the foundation of our theme, ‘Raising Legends.’ She was a legend for the effort and love she gave throughout the years.”

Brown died June 9. On Monday, the school hosted a memorial for Brown, releasing balloons in her memory.

School historians will work through the year to identify and celebrate other Ware Shoals graduates who went on to do great things. Webb said the butterflies in her stomach all scattered last night, as excitement to see her new students took over.

The theme also celebrates those who choose to give back to the community that helped raise them, such as new seventh-grade math teacher Jayda Abney. She was part of Ware Shoals High School’s Class of 2017, and came back to town after living in Florida to teach at her former middle school.

“I just came back for family, friends and the relationships I have here,” she said. “Memories are forever, and of course a lot of those memories were made right here.”

She’s looking forward to building the kinds of lasting connections with her students that she had with her favorite teachers growing up.

Students in Greenwood County headed back to school Thursday morning on the first day of the modified, year-round calendar.

Prosecutor: No charges in jail death due to poor training

Republican senator admits police may have saved his life during riot