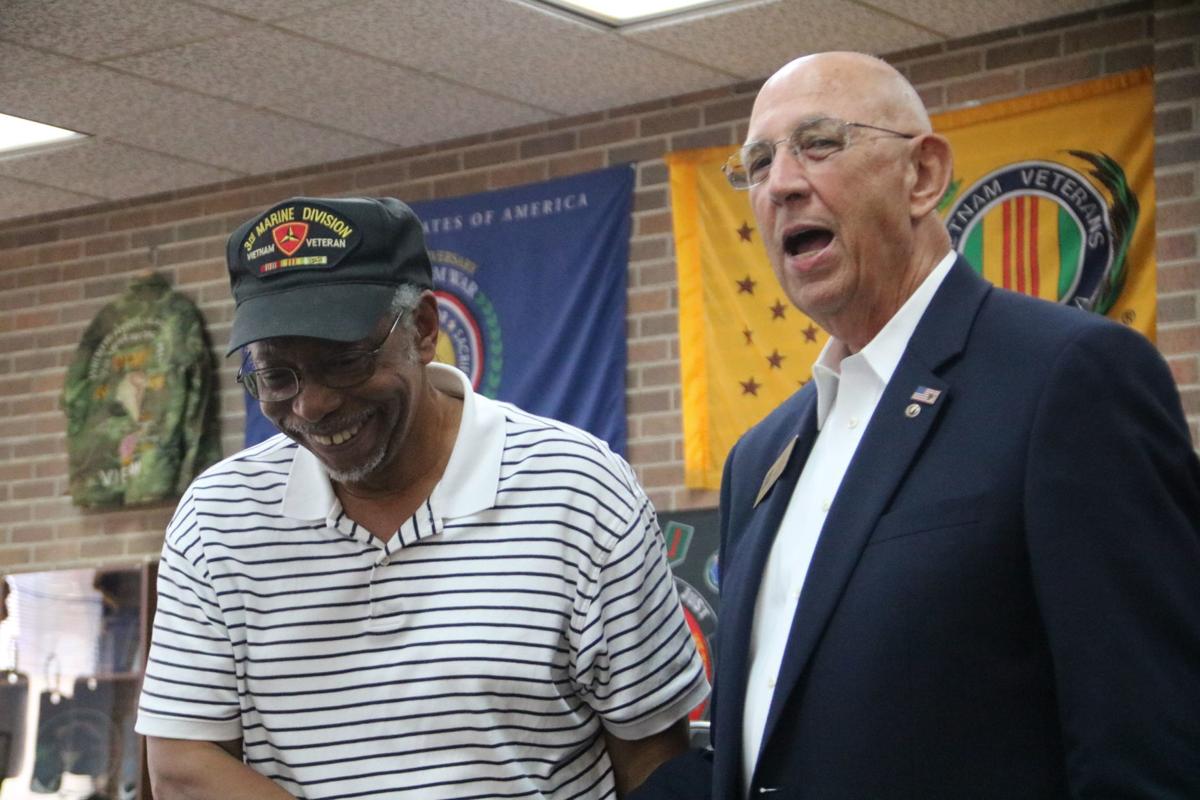 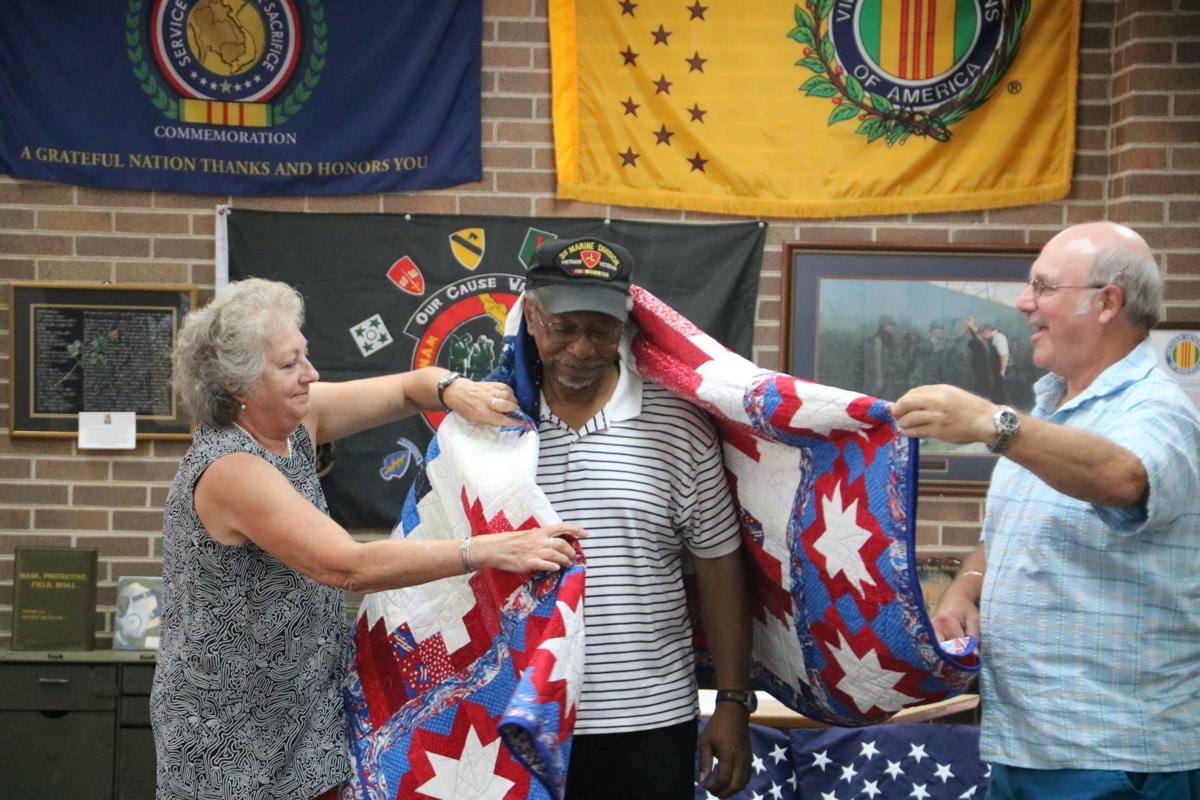 James Blair, a veteran of the Vietnam War, receives his Quilt of Valor at Wednesday’s ceremony. 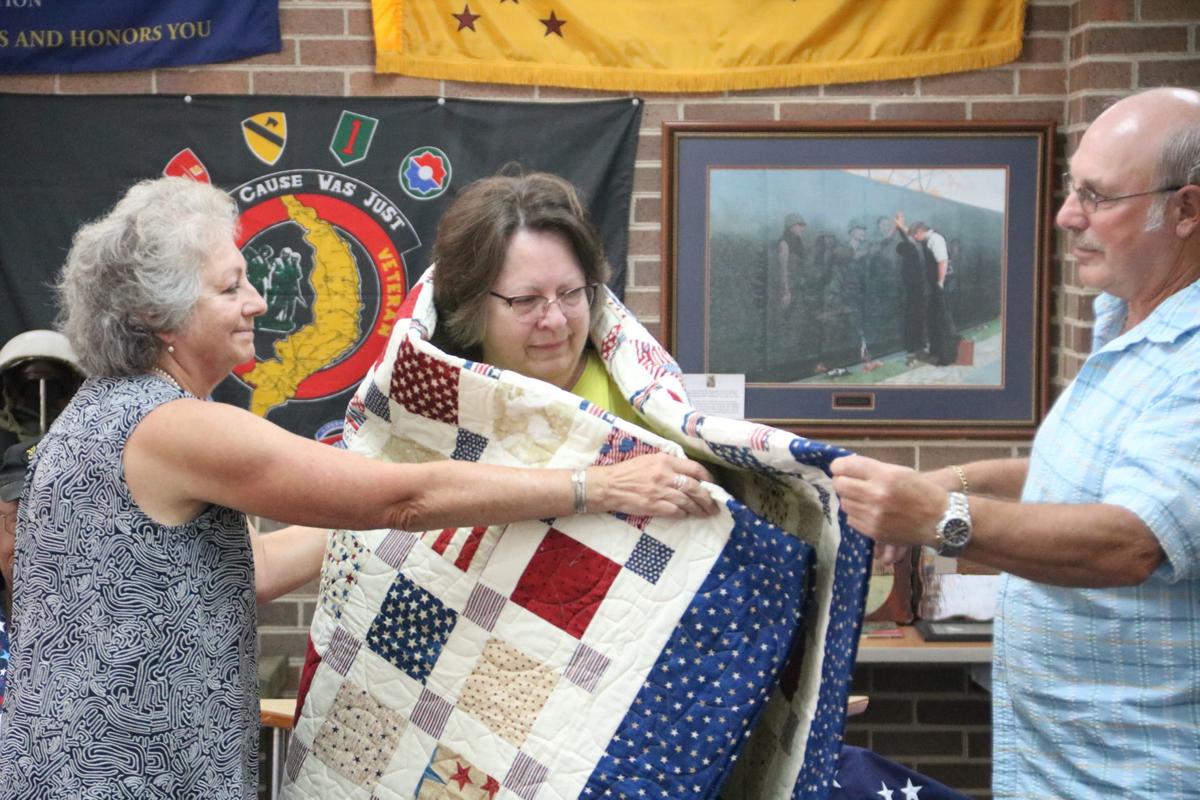 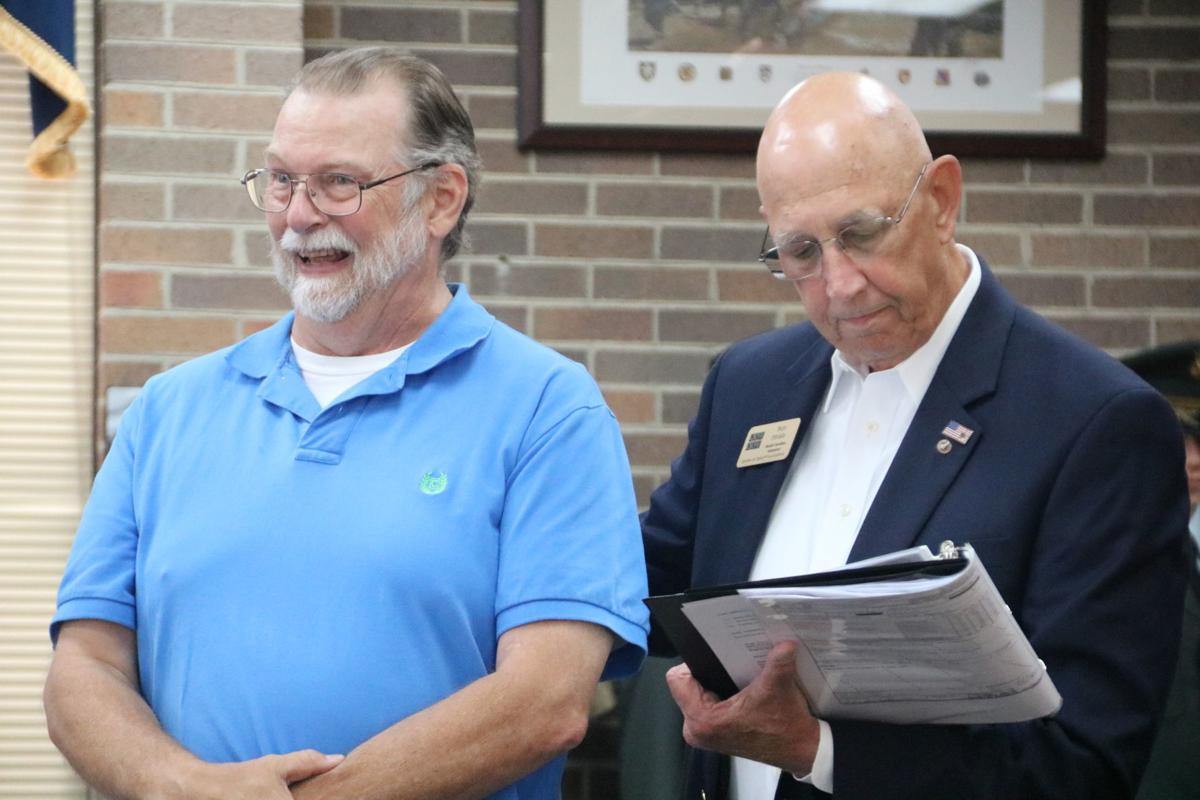 Jay Freeman laughs as he is introduced by Ken Hinkle at the Greenwood County Veterans Center. 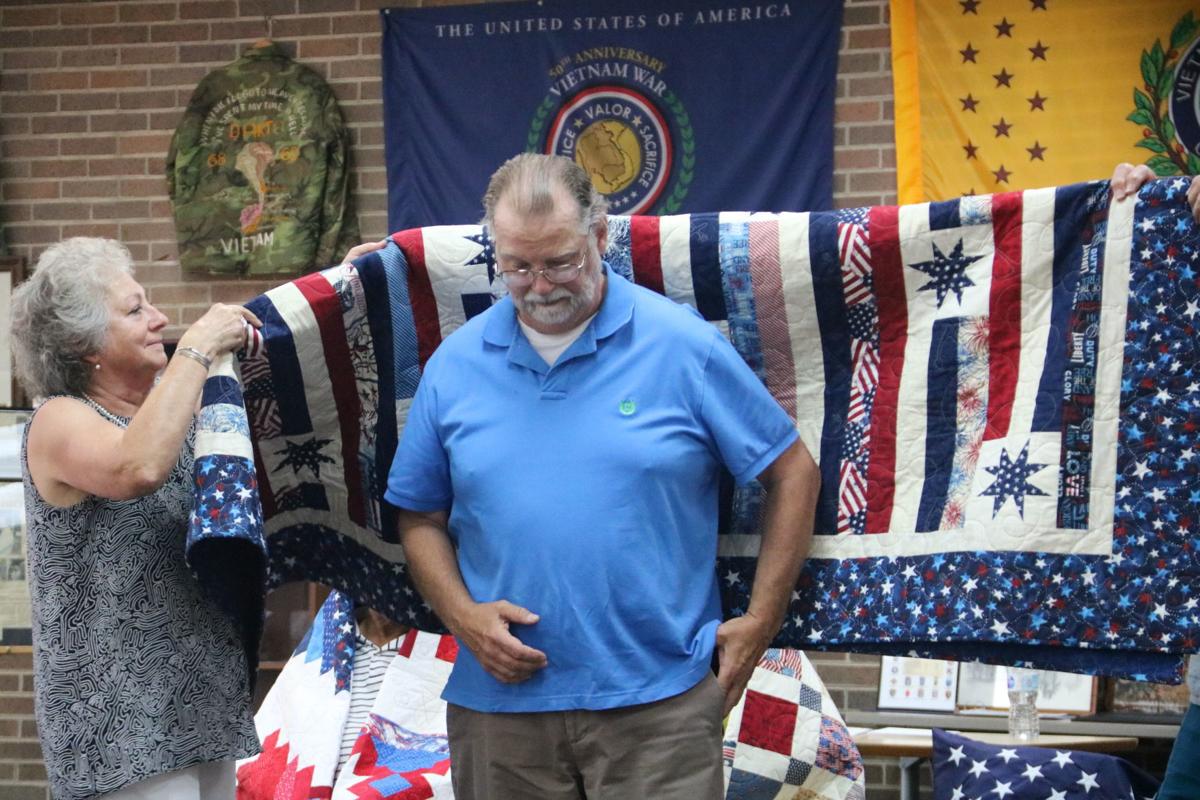 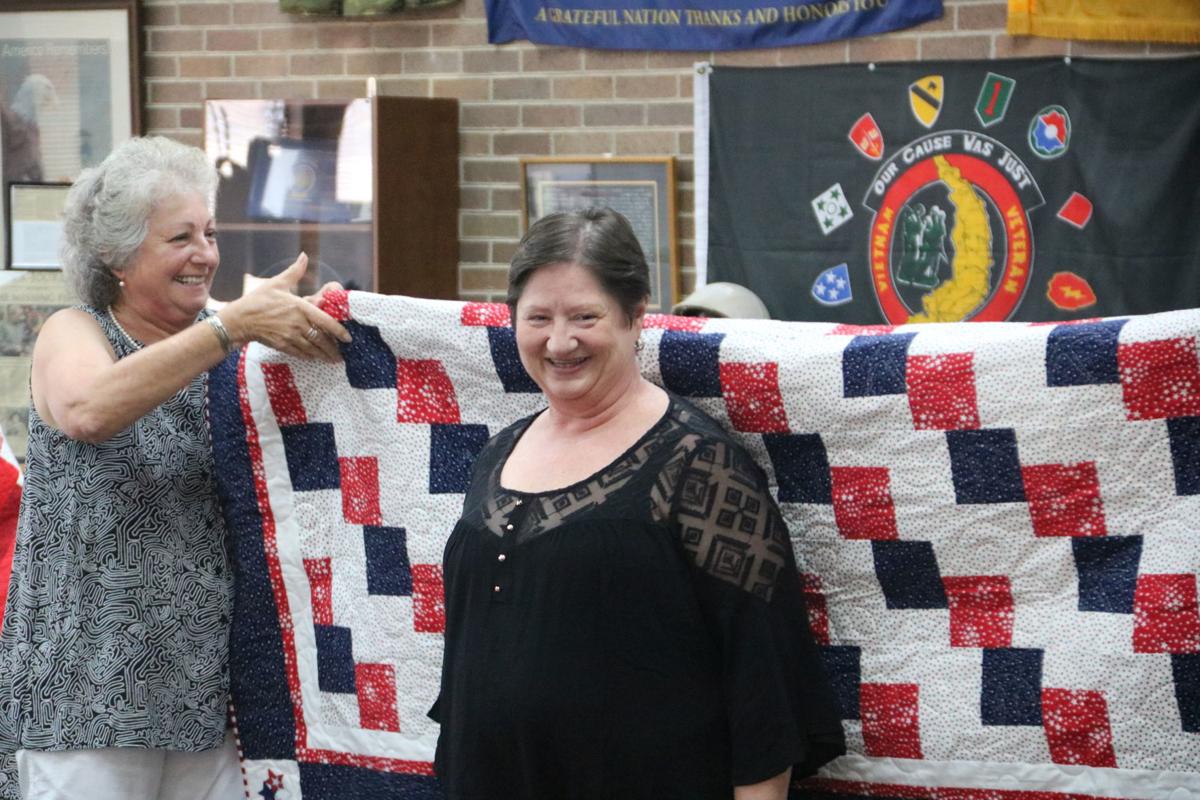 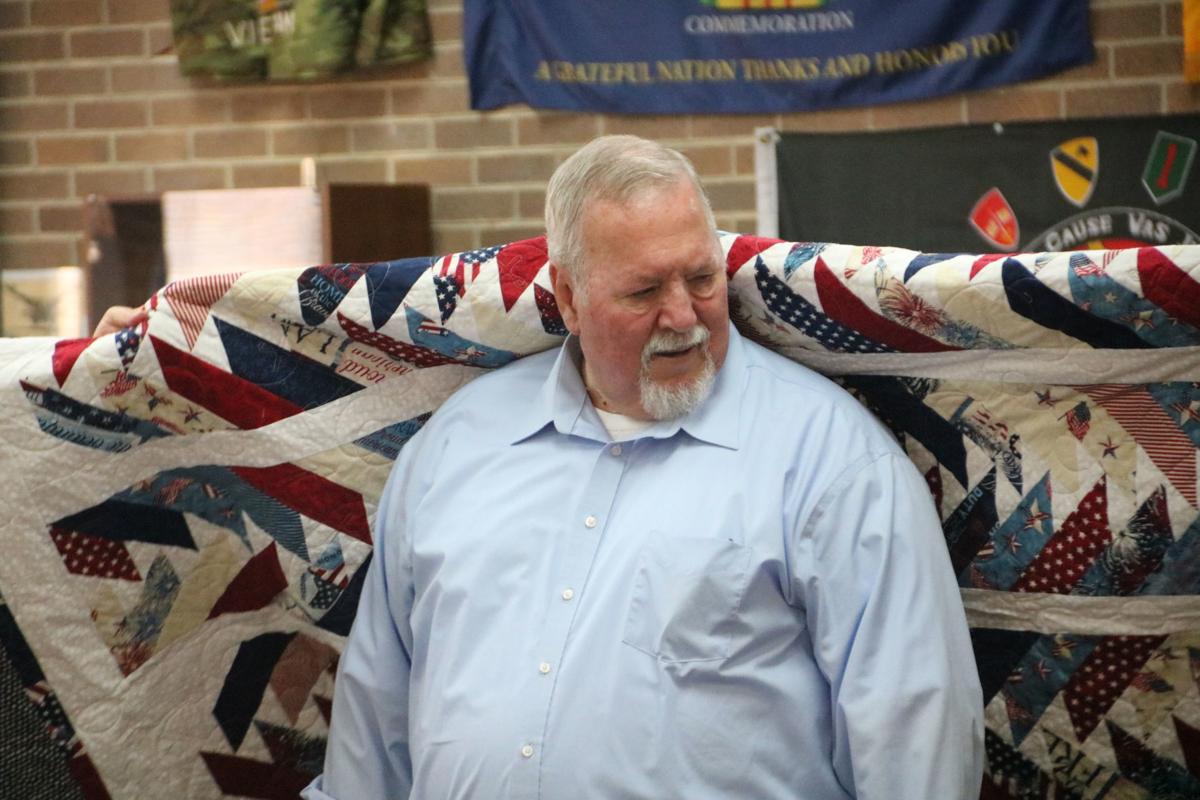 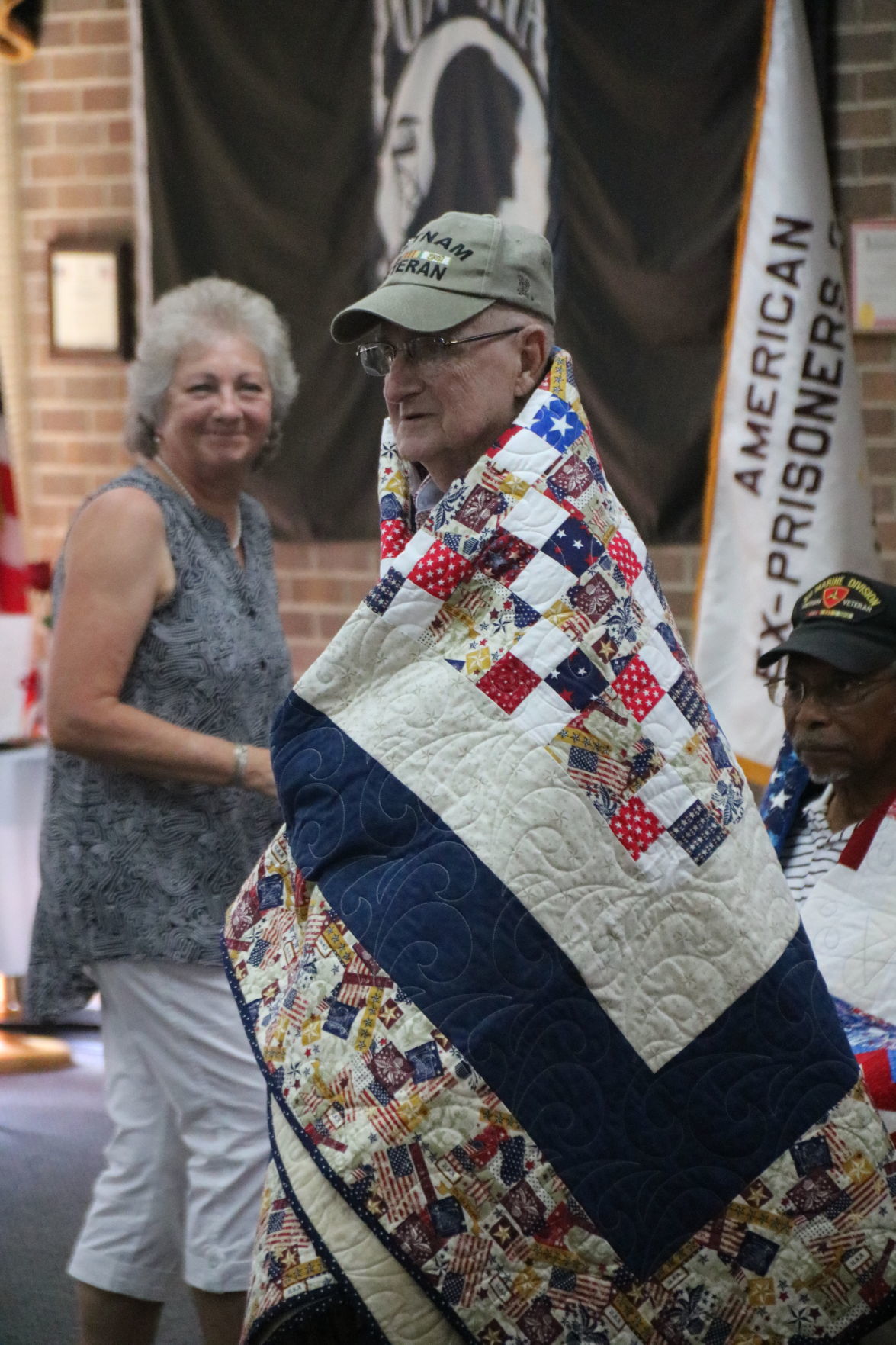 Pete Snellings is wrapped in his Quilt of Valor at the Greenwood County Veterans Center Wednesday. 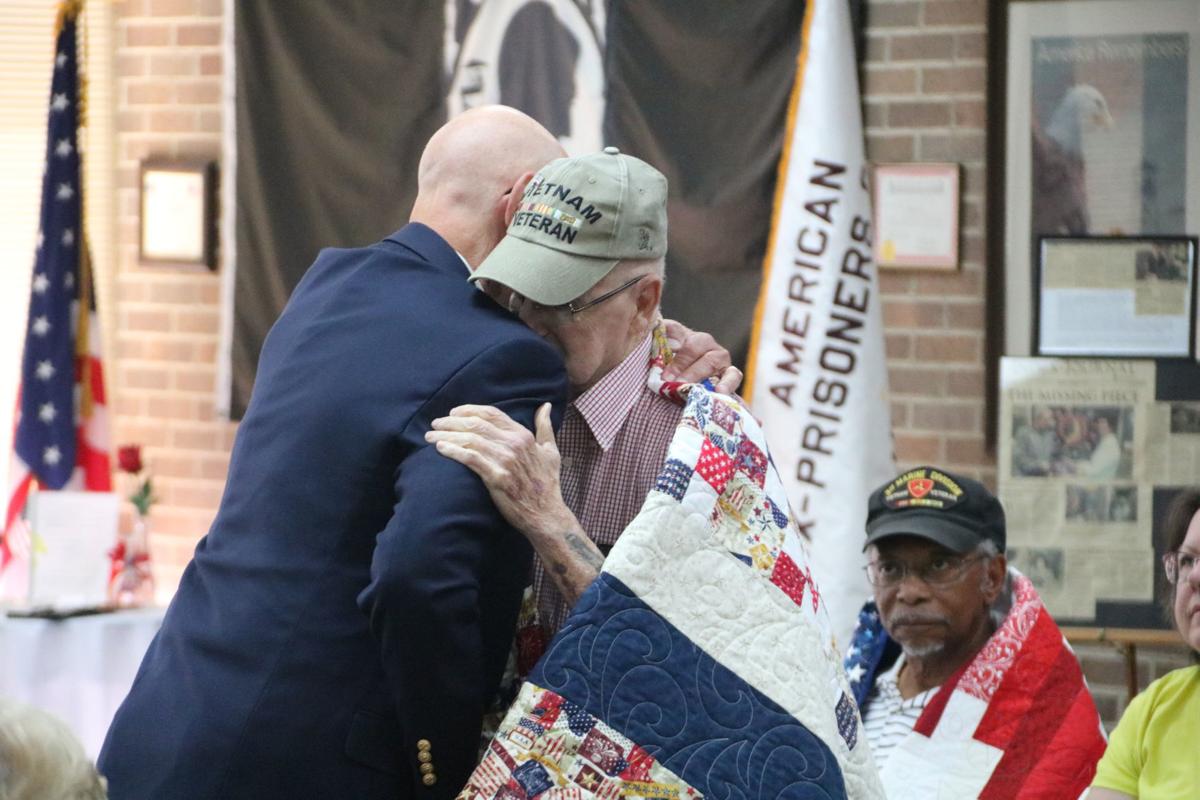 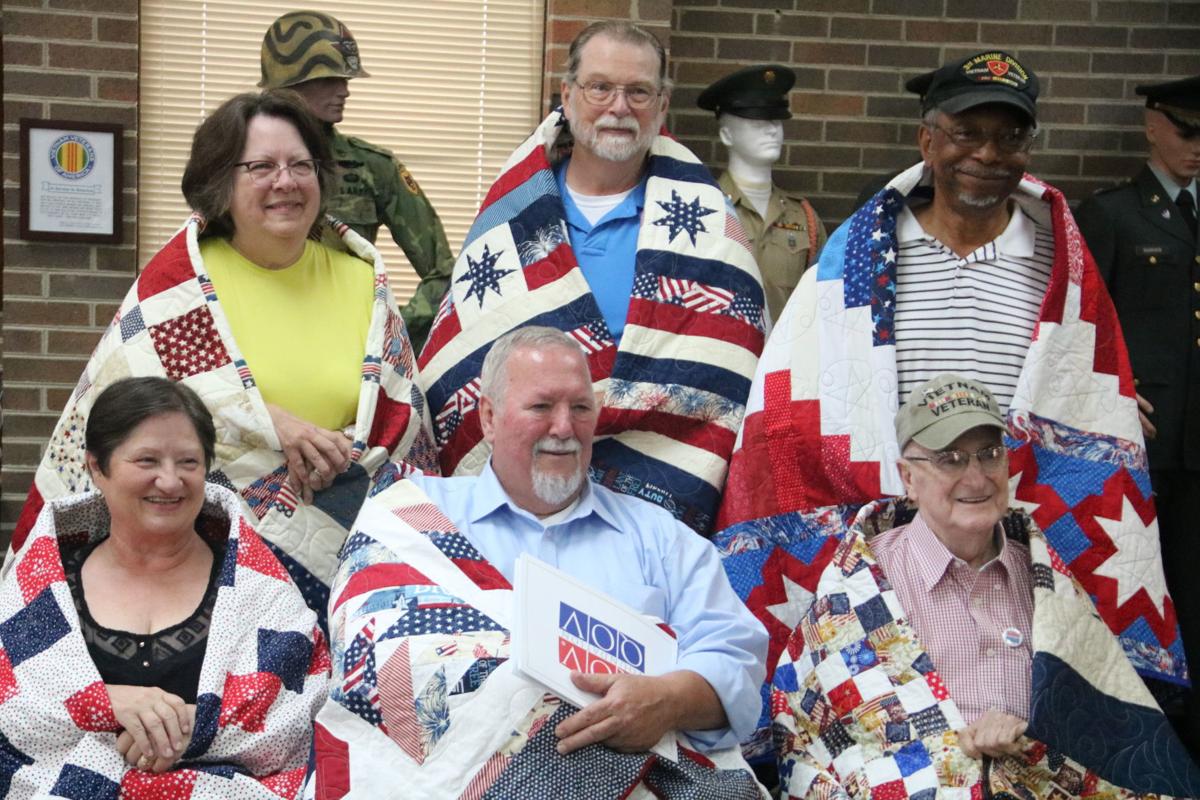 James Blair, a veteran of the Vietnam War, receives his Quilt of Valor at Wednesday’s ceremony.

Jay Freeman laughs as he is introduced by Ken Hinkle at the Greenwood County Veterans Center.

Pete Snellings is wrapped in his Quilt of Valor at the Greenwood County Veterans Center Wednesday.

When James Blair’s service in the Vietnam War ended, his first stop back in the United States was in California. He was met by protesters.

“I think the people, they were against some parts of the war, and they took it out on the warrior, but you don’t do that,” he said. “All gave some, some gave all. And some still do.”

The cold reception he received then made Wednesday’s ceremony at the Greenwood County Veterans Center all the more touching, he said.

Blair was one of six Lakelands veterans who were awarded Quilts of Valor. The ceremony was organized by the Upstate chapter of the Quilts of Valor Foundation.

The foundation’s mission is to “cover service members and veterans touched by war with comforting and healing Quilts of Valor.” According to its website, the organization awarded its first quilt in 2003 to a young soldier from Minnesota who had lost his leg in Iraq.

One of the recipients, Donna Sears, said ahead of the ceremony that the quilts symbolize “the hug, the ‘thank you for your service.’”

“I am a recipient of a Quilt of Valor, and I know what it means (to receive a quilt),” Hinkle said. Other veterans, he continued, have used them for comfort or to cope with their post-traumatic stress disorder. He shared the story of one who would wrap herself in her quilt with her dog whenever someone would set off fireworks nearby, the sound of which brought back memories of war.

Jay Freeman wiped away tears as he stood before the crowd. His friend, Sherry Edwards, who had made his quilt and three others presented at the ceremony, wrapped it around his shoulders after Hinkle introduced him.

But Wednesday’s ceremony was mostly a lighthearted affair.

Hinkle, an Air Force veteran, said he had never presided over a ceremony in which all the honorees were former Navy. He asked the crowd what the Navy’s battle cry is: “Hooyah, isn’t it?”

“No!” Someone shouted from the crowd. “Where’s the coffee?”

“There goes my punchline,” Hinkle said in mock disappointment. “Thank you very much. Damn sailors.” The crowd laughed.

The foundation has doled out more than 227,000 quilts since it was founded in 2003, Hinkle said. For the past eight years, South Carolina has led the country in donations. Last year, it donated 3,100 quilts, 700 in the Upstate alone. Hinkle expects more than 800 will have been distributed in the region by the year’s end.

Helen Hinkle, Ken’s wife and volunteer for the foundation’s Upstate chapter, said most of the quilts the chapter awards are made and remain in the Upstate, with few exceptions.

Quilts have to be requested. Although veterans can request a quilt for themselves, more often they are requested on another’s behalf. After a request is made, the foundation ensures the would-be recipient was honorably discharged and hasn’t already received a quilt.

Helen Hinkle said the foundation urges those who have requested quilts on another’s behalf to make sure the ceremony is a surprise for the recipient. Veterans often try to turn the quilt down or have it given to someone else who they think sacrificed more.

Blair first heard of a Quilt of Valor when a woman came to a meeting of Abbeville’s Vets Helping Vets. Blair was nominated by others in the organization, but forgot about it until several weeks ago, when he was told that we would be receiving a quilt at the veterans center.

After Hinkle called him up and introduced him to the crowd, a quilt was draped around his shoulders.

“James, from one Vietnam veteran to another, thank you for your service,” Hinkle said. “And welcome home.”

English pubs are reopening — they won't be the same

Redskins to have 'thorough review' of name amid race debate

Iran will not disclose cause of mysterious nuclear site fire

Germany is first major economy to phase out coal and nuclear

Groups call for meetings as US lab preps for weapons work