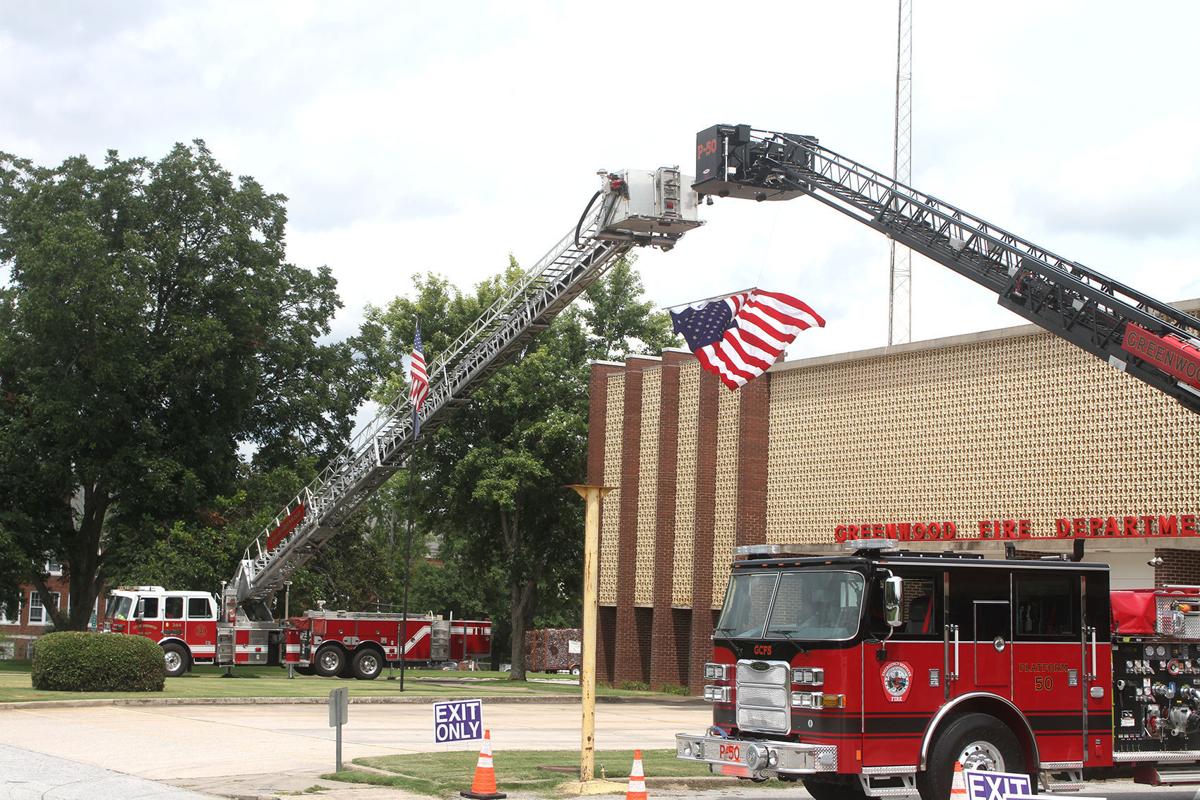 The American flag was suspended from two ladders at Greenwood Fire Station No. 1 in honor of the late Steve Brown, whose homegoing service took place Saturday across the street at South Main Baptist Church. 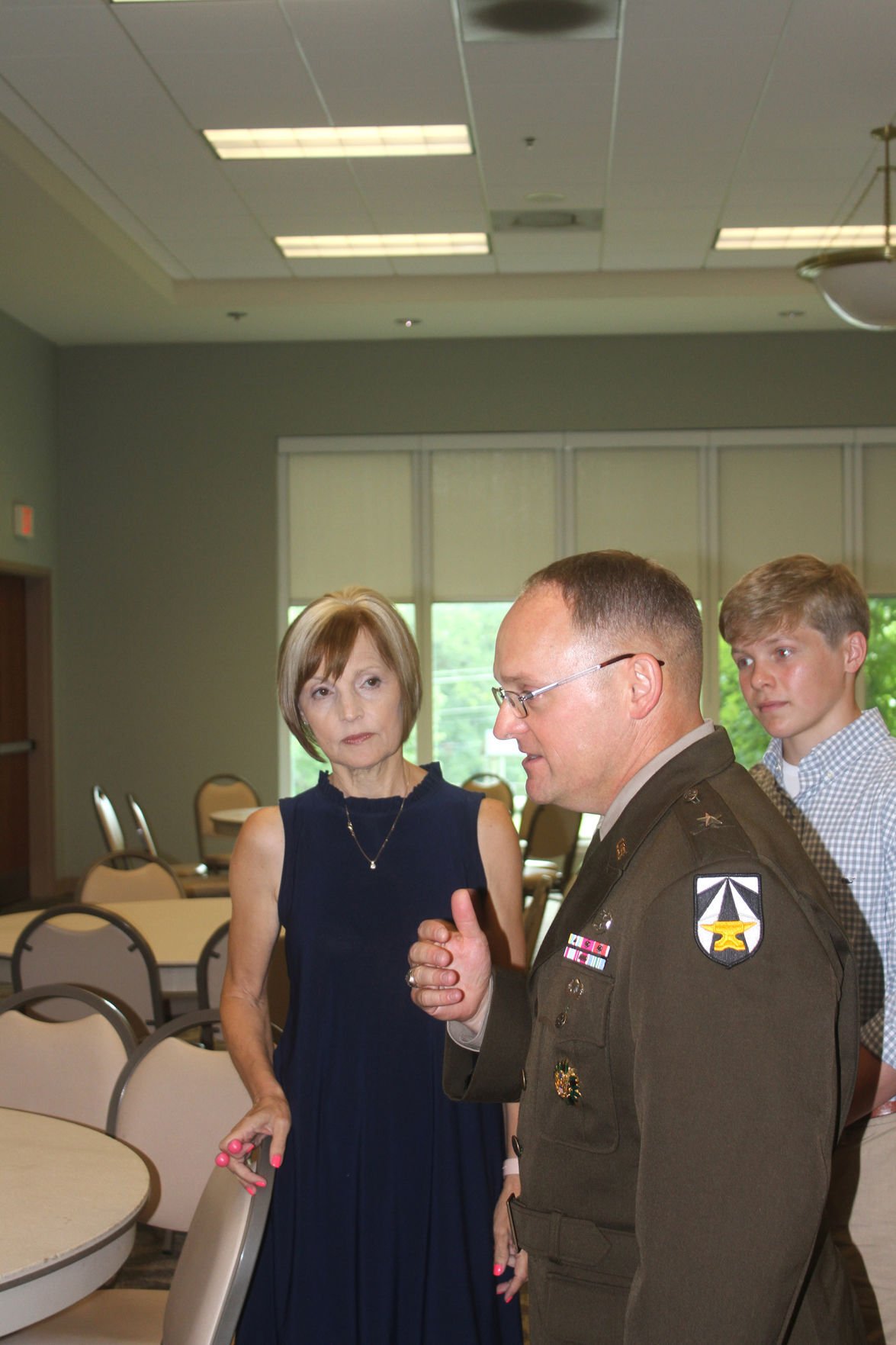 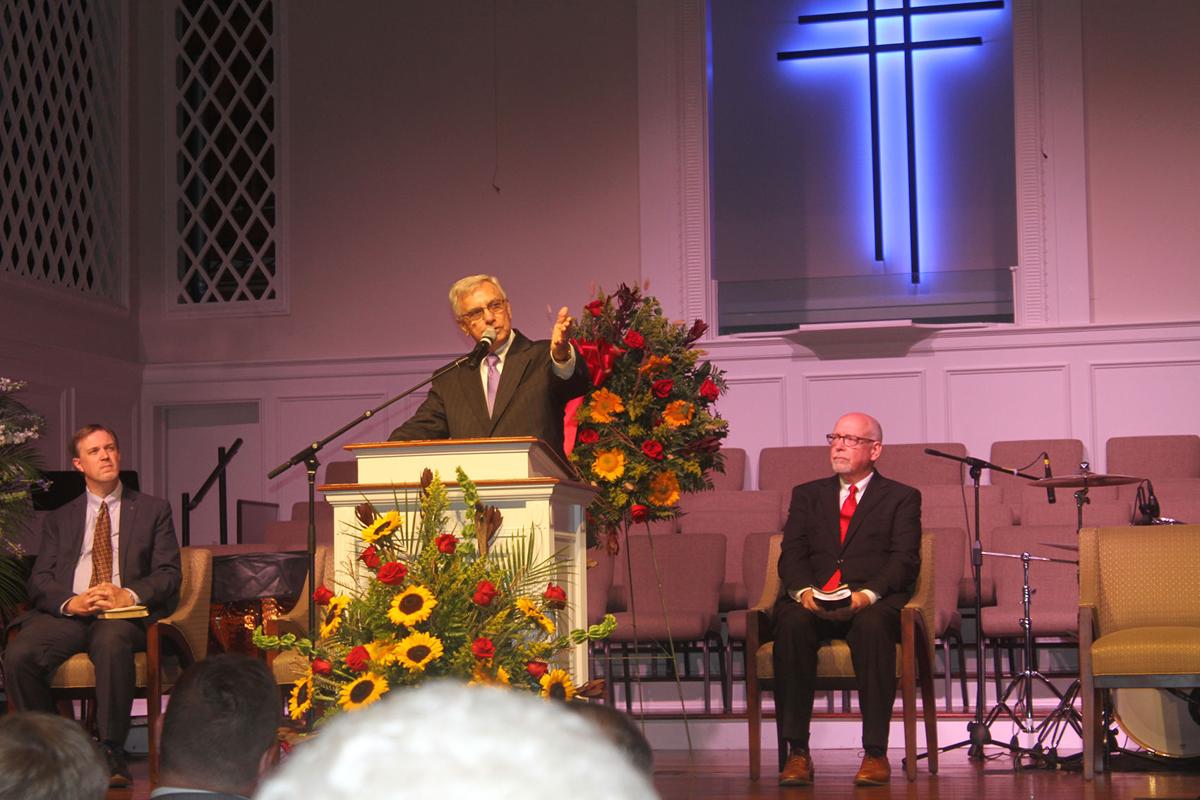 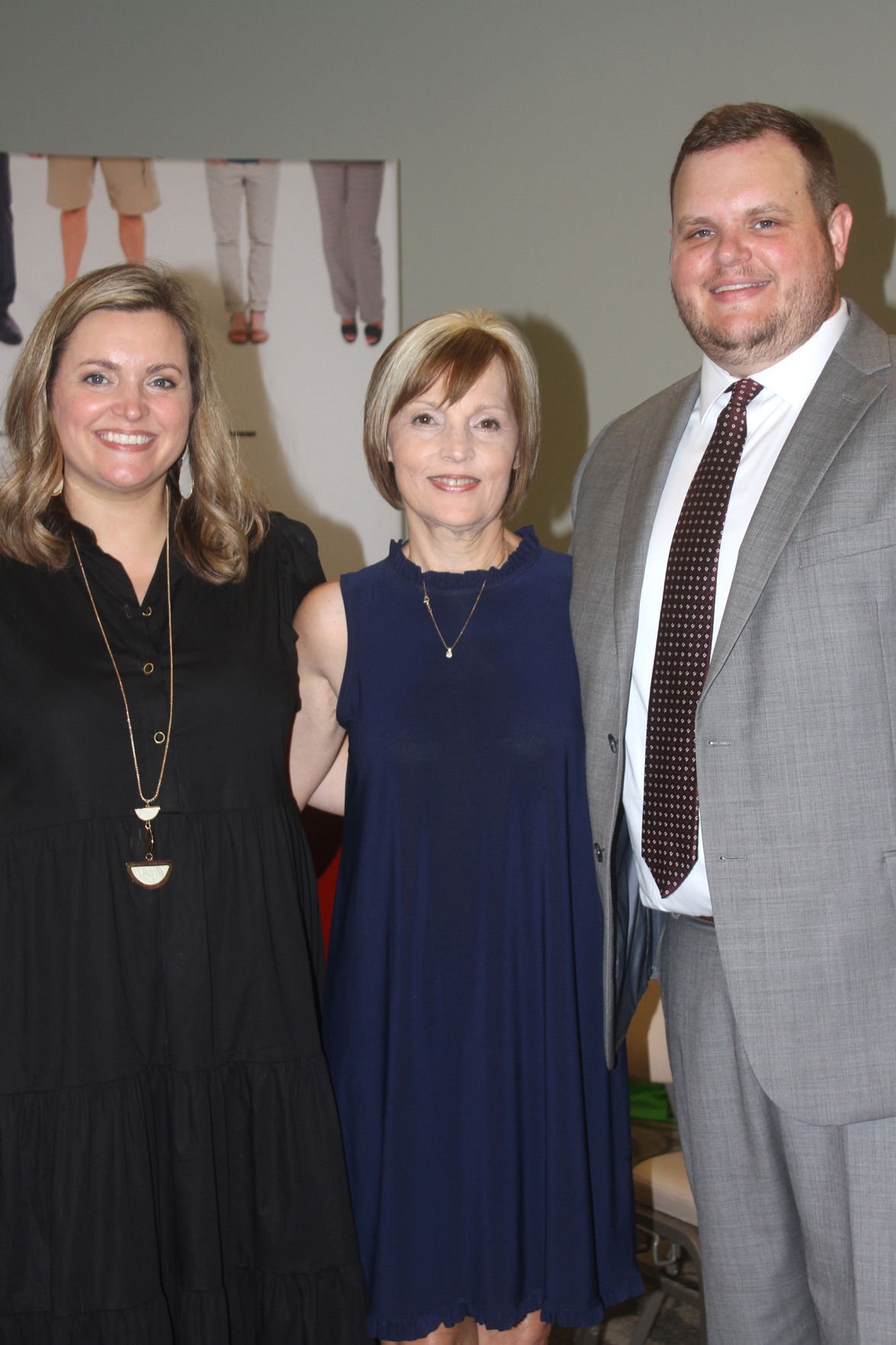 Meagan Brown Winborn, Beverly Brown and Gavin Brown pose for a picture during a reception at a homegoing service for Steve Brown, who died Aug. 13 at age 73. 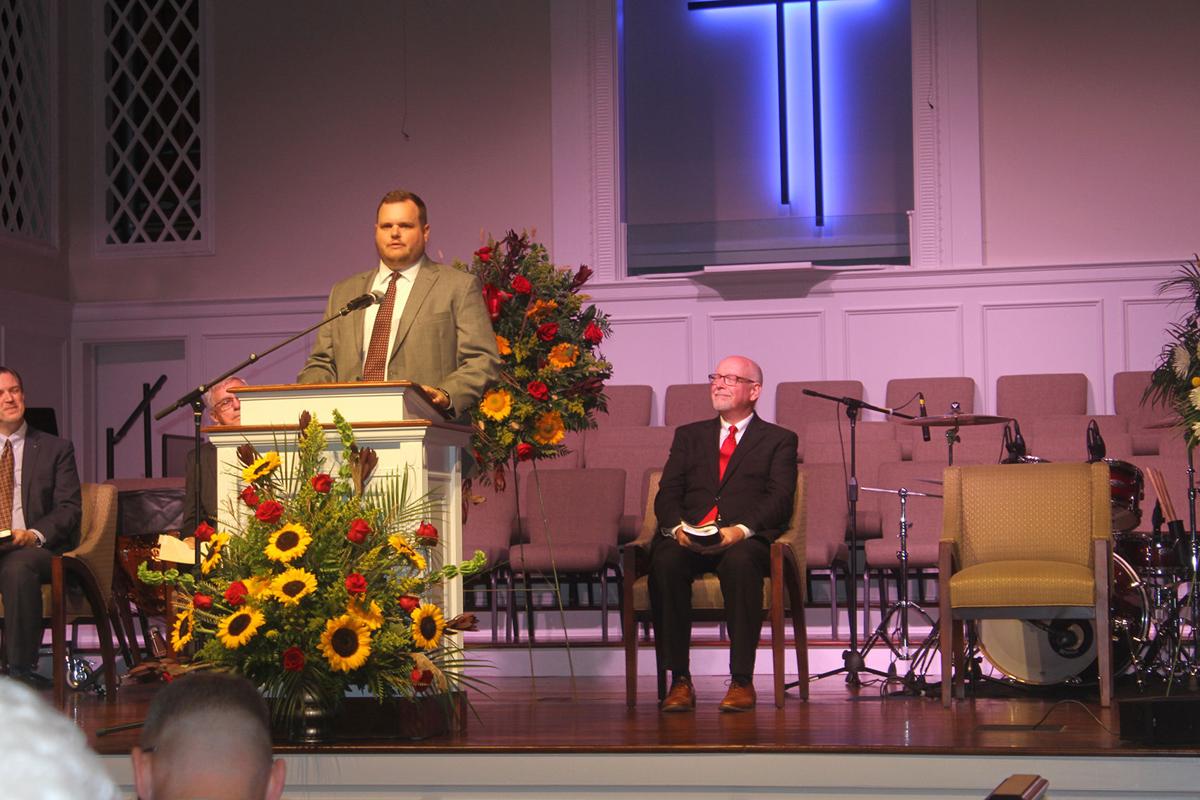 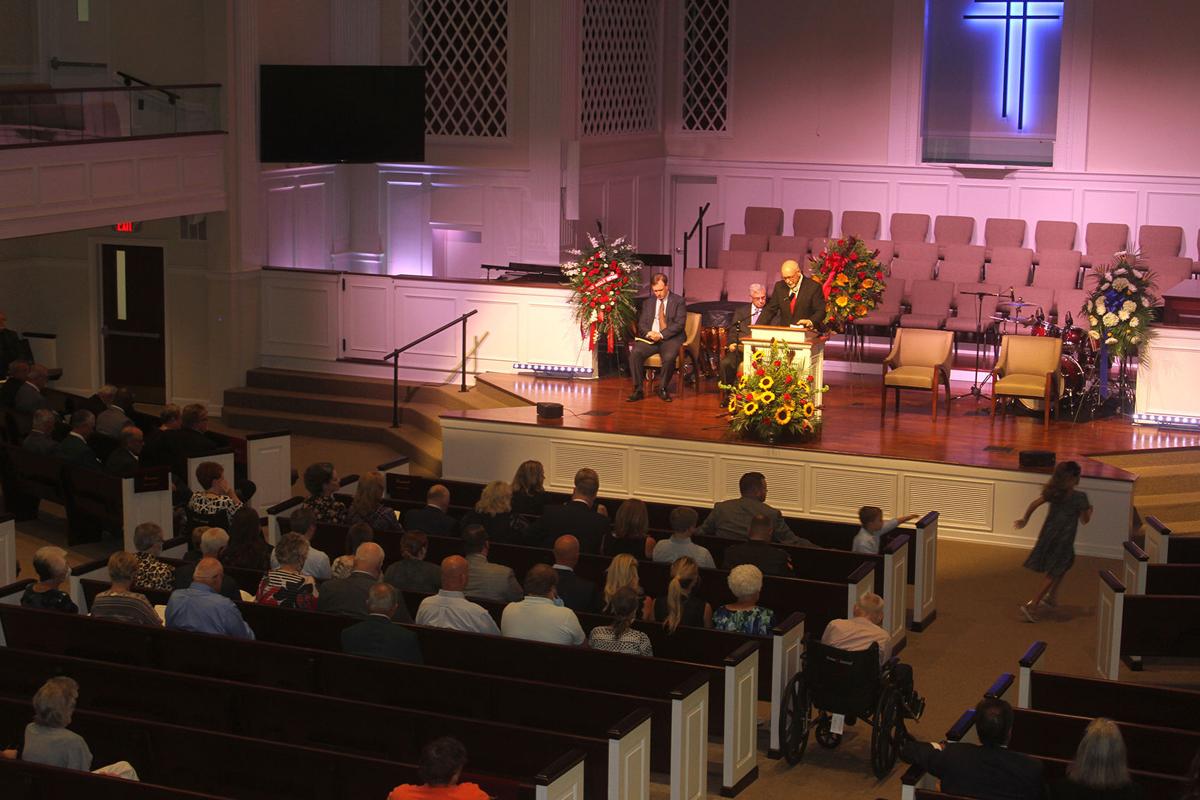 The American flag was suspended from two ladders at Greenwood Fire Station No. 1 in honor of the late Steve Brown, whose homegoing service took place Saturday across the street at South Main Baptist Church.

Meagan Brown Winborn, Beverly Brown and Gavin Brown pose for a picture during a reception at a homegoing service for Steve Brown, who died Aug. 13 at age 73.

Not all tears are an evil.

Not so many tears were shed at Saturday’s homegoing service for Steve Brown, former Greenwood city manager and county councilman.

“When eternity looms before us, we call upon the name of Jesus ...,” said Toby Frost, the senior pastor at South Main Street Baptist Church where the service was conducted. “Only he can turn a funeral into a homegoing celebration.”

“You’ve only lost something when you don’t know where it is. We know where Steve is. Steve Brown is home.”

Frost’s prayer is that people turn grief into joy, eat good food and live life to the fullest. Brown would want it that way, he said.

Family, friends, co-workers and acquaintances gathered to hear stories about Brown and to relate their memories of Greenwood County Council’s former chairman.

Brown was a man of high faith who believed in doing the right thing, said Floyd Nicholson, who as mayor worked with then-city manager Brown for years. He worked to make the city better for everyone, Nicholson said.

Nicholson’s favorite memory of Brown was talking about their families and how to make them better. Nicholson recalled conversations and laughing when talking of their children and Brown’s passion for hunting.

Greenwood County Council member Chuck Moates noted that people will remember someone long after they are gone. That rings true with Brown, he said. He was a consistently dependable and trustworthy man.

“He said what he meant and meant what he said.” That is a rare thing in politics, Moates said.

Brown always gave people a chance to speak even when he didn’t agree with them, Moates said. He always sought consensus, creating a climate of cooperation and harmony.

“He wasn’t a politician; he was a statesman,” Moates said. “He was determined to do what was right, not what was politically expedient.”

Several people spoke of Brown’s love of hunting rabbits — not that he was particularly successful. His son, Gavin, said his father was bad at aiming, a trait he passed on.

One friend remarked that if he heard three shots, he knew it was either Steve or Gavin.” Brown would reply, “That’s why we have five shots.”

Jimmy Brown, a cousin who joined in the hunts, said Gavin told the truth about shooting. “As much time as we spent in the woods, we should have been better shots than we were.”

Brown also knew what he wanted. A man who was happy to have pound cake for breakfast, Gavin said one of his father’s last requests was a Snickers bar.

When Brown asked his son to speak at the service, he had only one request: “Keep it short.”

Gavin said his father was the epitome of “what you see is what you get.” With Brown, there were two ways of doing things — his way and his way.

As a child, Gavin admitted he thought his father was controlling, that he was “stifling my creativity.” As an adult, he recalled asking his father for advice.

He liked being around people, but he didn’t micromanage. Brown told his son to hire the right people and give them what they need to do their job. Then, Gavin said, his father would say, in a low growl, “Let them work.”

Gavin said during a reception after the service that his father used the low growl when he wanted to enunciate.

Brown had no fear of dying in his last days. Gavin recalled his sister, Meagan, asking their father, “Dad, are you scared?” He replied, “No, I’m ready.”

“I’m struck by the consistency of what I have heard,” Brock said. He served as Brown’s pastor for eight years. He soon learned of Brown’s compassion and his love of people. He recalled Brown’s work with the church, handling various repair projects and leading adult Sunday School classes. He also realized the number of children who took voice lessons because of him.

“Something in him touched more people than you can imagine,” he said. He also spoke of Brown being a calm and compassionate person.

In a final conversation they had, Brown asked Brock why he canceled his family vacation. Brock, not knowing how Brown knew the vacation had been canceled, said he had had a pressing matter to tend to.

“Make sure you go on a vacation. Your family needs it,” Brown told him.

Even in that condition in the CICU, with him sitting in a chair, it was easy to talk to him, Brock said.

“He was fully in God’s hands and it did not bother him at all. I will truly miss Steve Brown,” Brock said.

Alex Murdaugh asks to leave jail after 5 days behind bars

Lena Güldenpfennig: The footballer balancing on pitch duties with esports