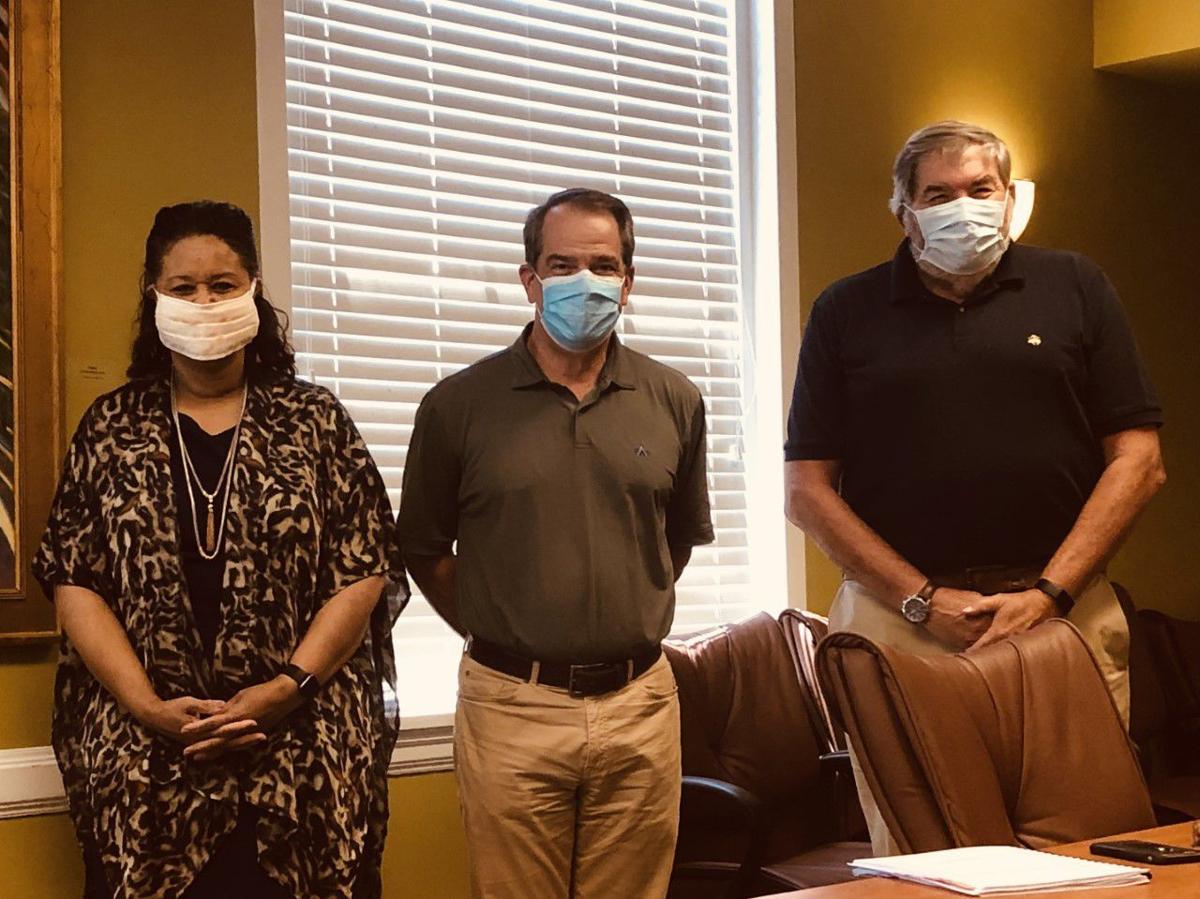 Mamie W. Nicholson of Greenwood, left, assumed the role of president for the philanthropic Self Family Foundation on July 1. With her are Jay Self III, foundation chairman and trustee. and Frank J. Wideman III, who is retired as foundation president after 27 years in that role. 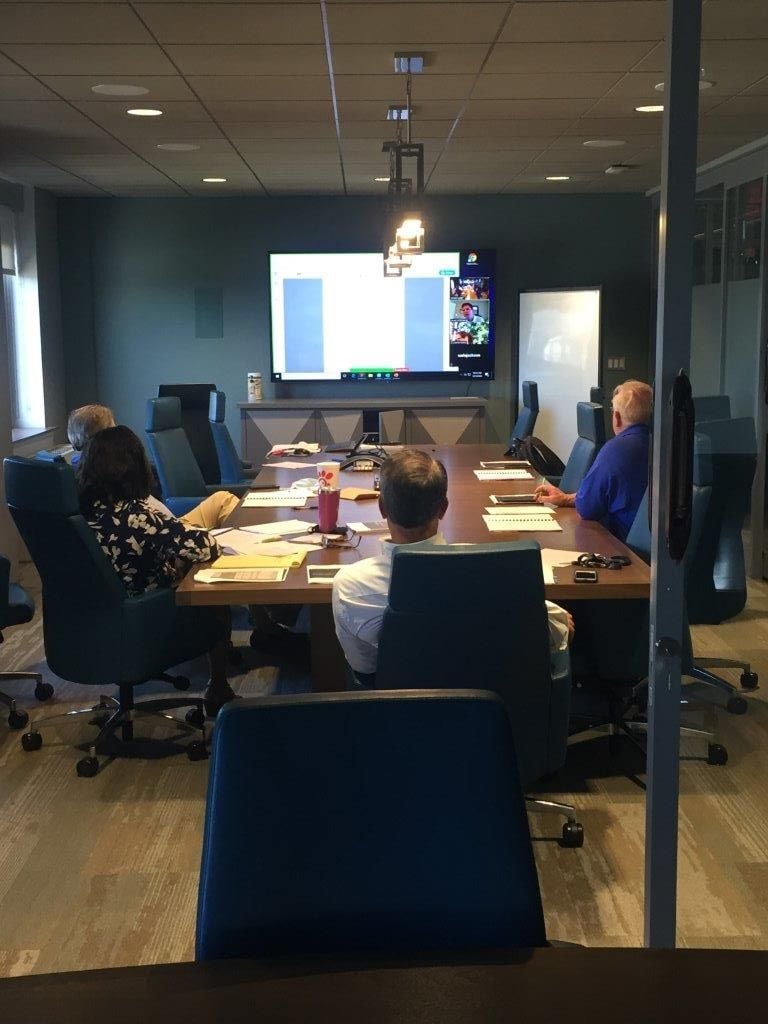 Trustees and leadership of the Self Family Foundation board meet via Zoom on July 25. Grants totaling $151,000 were awarded at the meeting. It marked Mamie W. Nicholson’s first board meeting as foundation president.

Mamie W. Nicholson of Greenwood, left, assumed the role of president for the philanthropic Self Family Foundation on July 1. With her are Jay Self III, foundation chairman and trustee. and Frank J. Wideman III, who is retired as foundation president after 27 years in that role.

Trustees and leadership of the Self Family Foundation board meet via Zoom on July 25. Grants totaling $151,000 were awarded at the meeting. It marked Mamie W. Nicholson’s first board meeting as foundation president.

She assumed the role of president for the Self Family Foundation July 1, after the retirement of Frank J. Wideman III, who served as foundation president 27 years.

This is a new job title for Nicholson within the Greenwood-based private family philanthropic nonprofit organization. Since 1996, she has been the foundation’s program officer.

Nicholson said she is retaining her duties as program officer along with the role of president.

“It’s my favorite part of the job,” Nicholson said. “The foundation has always had an open door,” she said. “As a foundation, we see a big picture of our community, but the nonprofits are the experts when it comes to the people they serve here. I don’t know how to run a food bank, but I trust Wendi Andrews to know how to run the Food Bank of Greenwood County. If something in a request for funding doesn’t make sense, I’m going to the Food Bank so she can walk me through it. That’s what I do. I go out and actually see what is happening and how it’s being done.”

A few years ago, an enthusiastic Stephen Gilbert, executive director of Greenwood Community Theatre, popped into Nicholson’s office, she recalled.

“He bounded up the stairs and into my office and began talking excitedly about this theater program he had learned about,” Nicholson said, noting that program was the Illinois-based Penguin Project.

Greenwood Community Theatre has since successfully replicated it, making it the first theater program of its kind in South Carolina for youth and young adults with special needs.

“Before submitting a grant request online with the foundation, first call me to discuss it,” Nicholson said. “I don’t want you to go through the steps of submitting a proposal if it doesn’t meet guidelines.”

“We ask you to succinctly explain what your needs are and what the purpose of the grant is and to outline how you are going to sustain it when the foundation funds run out,” Nicholson said. “We also want to know who else is funding this proposal and we need a current financial statement, because nobody wants to fund a sinking ship. We need to know you are surviving. We also ask for interim and final progress reports.”

The foundation is governed by 11 board members, nine of whom are Self family members. Grants are awarded four times a year. July 25 marked Nicholson’s first foundation board meeting as president, where grants totaling $151,000 were awarded.

Ideally, Nicholson said, grant recipients should be self-sustaining organizations, avoiding duplication of other services provided by nonprofits in and around Greenwood.

“When somebody is considering nonprofit work, they need to consider if they want to chase grants or if they want to create a job and possibly a for-profit venture instead,” cautions Nicholson, noting both models require lots of work and dedication.

James C. Self, founder of Greenwood Mills, wanted to construct and maintain a hospital for Greenwood. This goal expanded into the Self Family Foundation — established in 1942 — that works to fund social, health and educational initiatives serving Greenwood and surrounding counties.

To date, the foundation has granted more than $68 million to organizations and institutions throughout South Carolina.

“The first major charitable investment of the foundation was building the hospital,” said Frank J. Wideman III. “Once hospital construction was complete, the foundation made grants to establish the nursing program at Lander.”

The hospital need became critical when a tornado ripped through Greenwood in April 1944, damaging what was then the Greenwood Hospital Building and numerous homes and other structures. Self Memorial Hospital was completed in 1951.

From the 1950s forward, Wideman said, a number of Foundation grants were for capital projects: development of the Greenwood Methodist Home (now Wesley Commons), computerization of the Lander University campus, a computer center at what is now the Darla Moore School of Business at the University of South Carolina, distance learning capabilities at Piedmont Technical College, establishment of and additions to the campus of the Greenwood Genetic Center and help to transform a decommission federal building in the heart of Uptown Greenwood into a thriving arts center and catalyst for a growing cultural district.

Self said one proposal he didn’t have to rethink was granting funds to the Call Me MISTER program.

In 2000, the foundation provided seed money to Clemson University to start that program – designed to increase ranks of African American male teachers in South Carolina’s public schools. Today, the program exists on 19 college campuses in the state, and graduates have taught more than 100,000 students, many in the state’s poorest schools.

When Nicholson came on board with the foundation in 1980 as an administrative assistant, after having worked as a secretary in human resources for Greenwood Mills, she said “the foundation started what I consider the on-the-ground grant-making, with smaller nonprofits in the community.”

A part of that work, which Nicholson enjoys, is pairing seasoned nonprofits with newer ones for mentoring.

“We have to give middle and high school kids somewhere to go after school to do something positive,” Nicholson said. “This foundation is an opportunity for the Self family to come together as a unit and do good.”

Learn more about the grant application process and deadlines at: selffoundation.org.

Nicholson a mentor for nonprofit directors