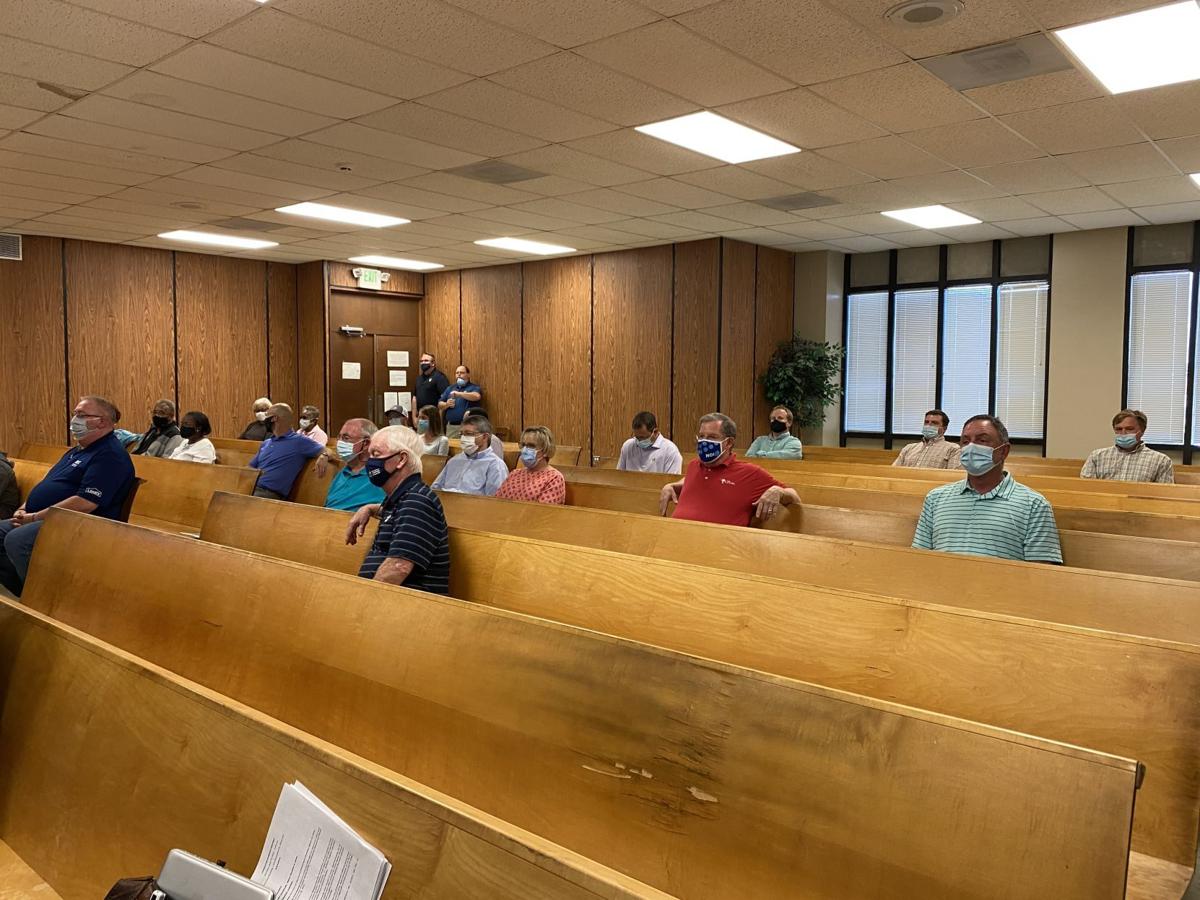 Many residents spoke against the annexation and rezoning of a property on Calhoun Road in Greenwood. 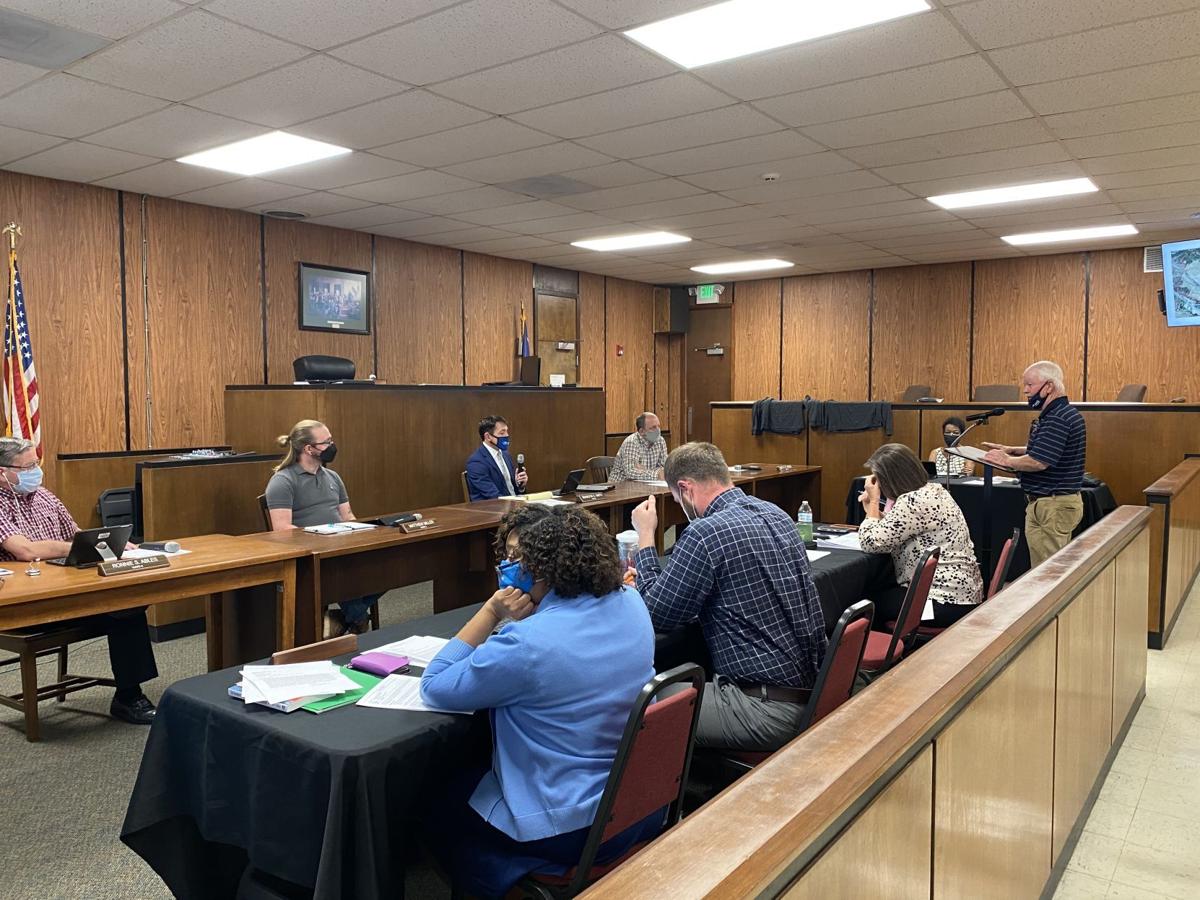 Marion Moore speaks against the annexation and rezoning of property on Calhoun Road in Greenwood. 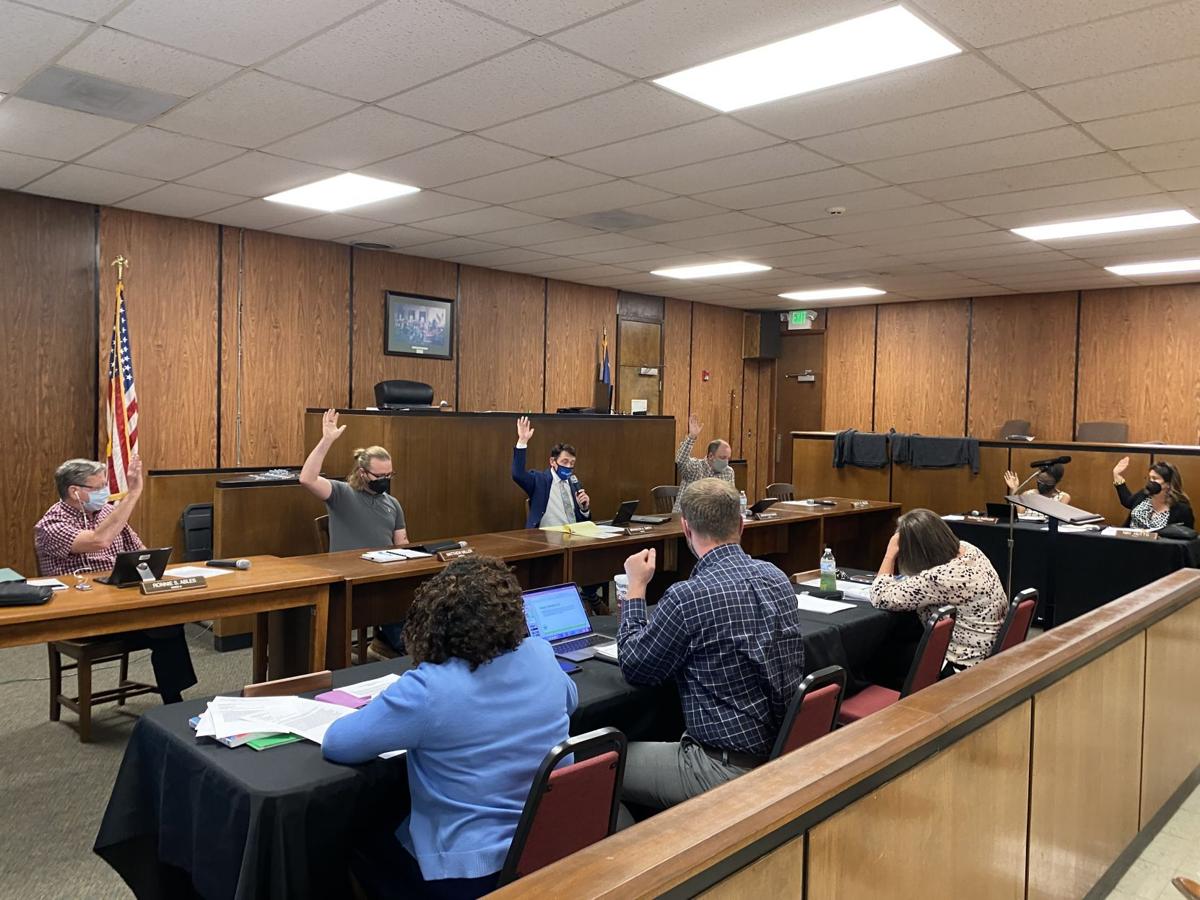 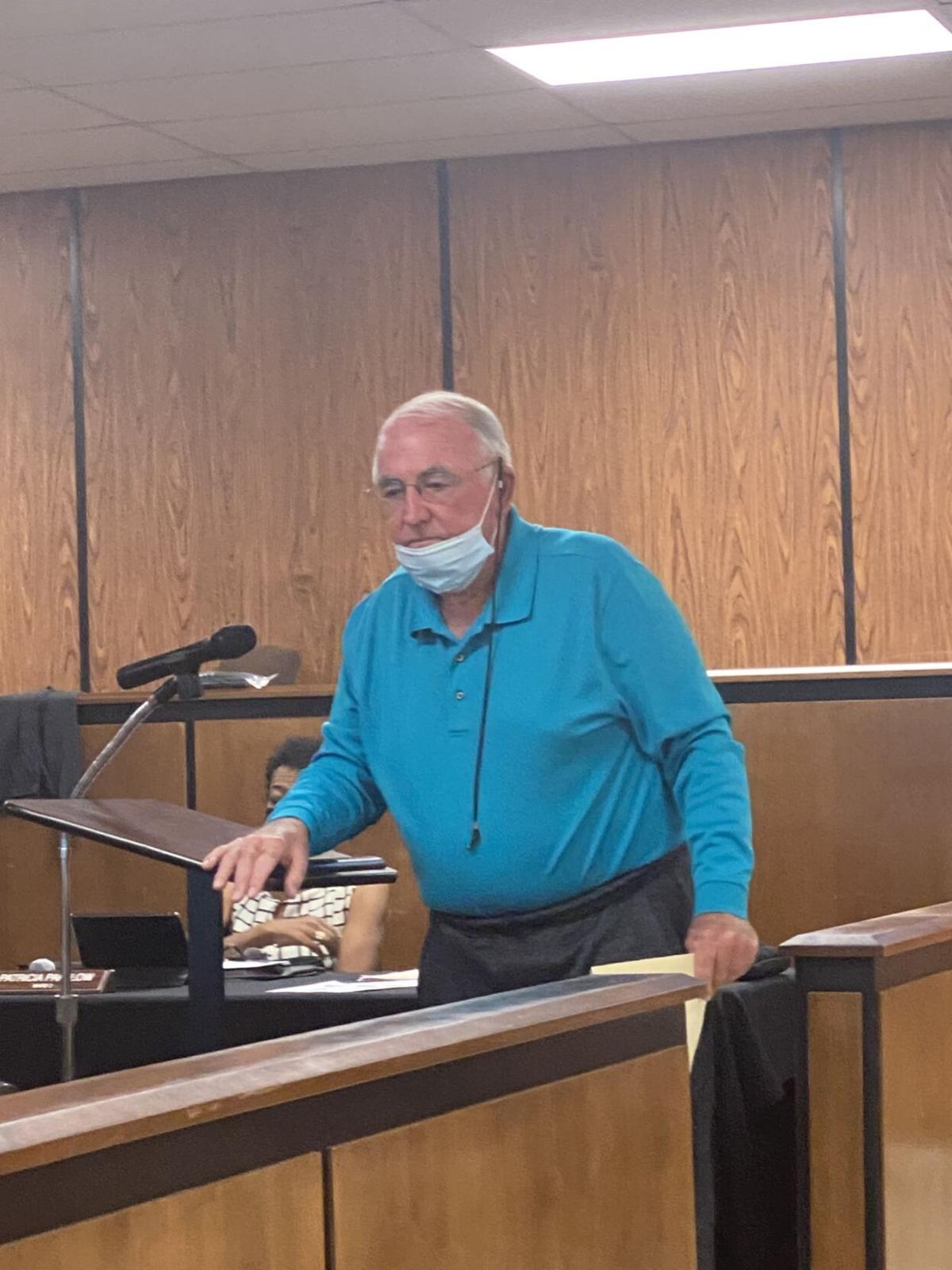 Joe Langley, who owns property near the potential residential development, speaks Monday against the annexation and rezoning of the property during the Greenwood City Council meeting. 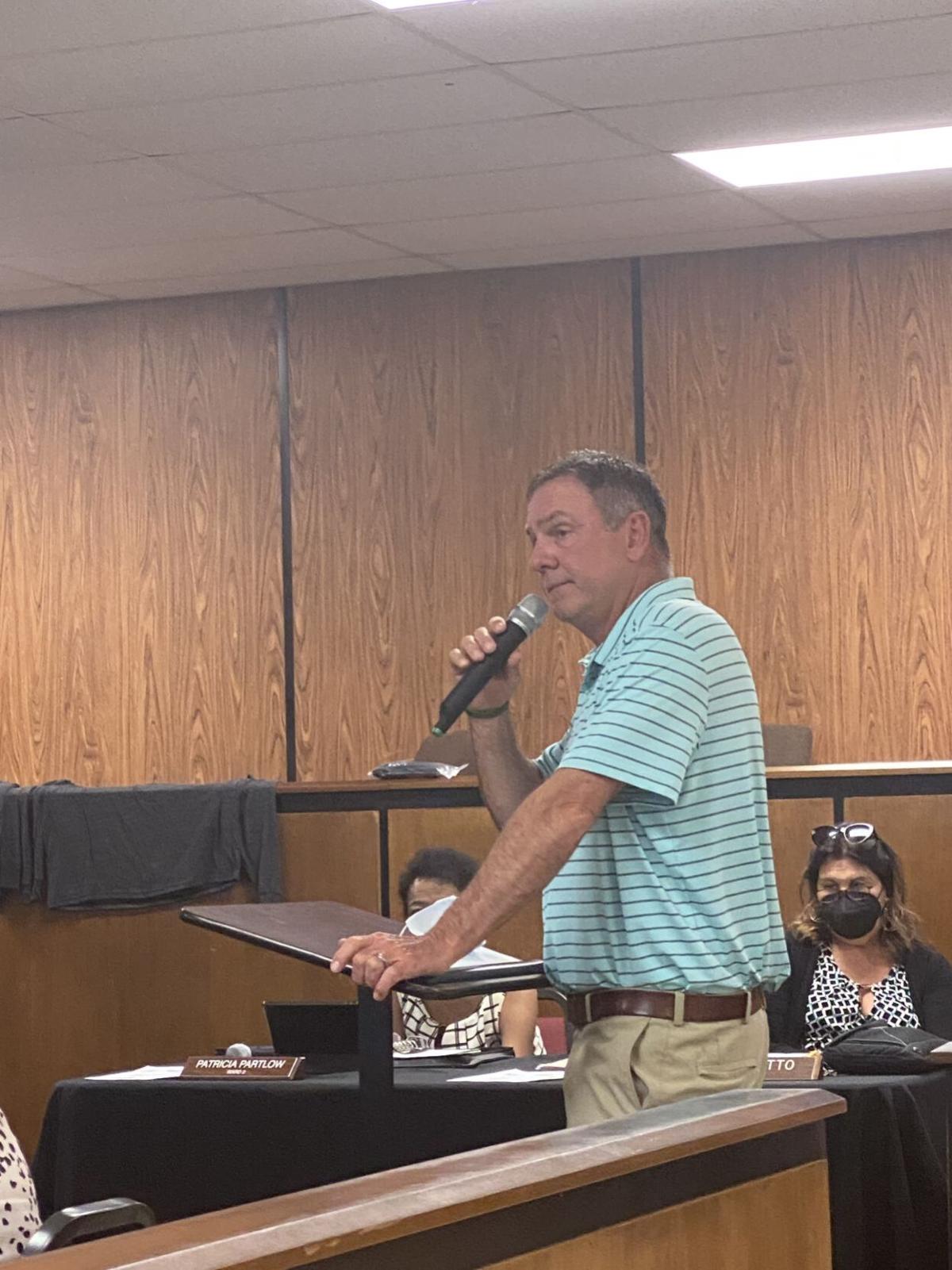 Jimmy Faulkner, whose land is beside the potential development, spoke against rezoning the property to high density zoning.

Many residents spoke against the annexation and rezoning of a property on Calhoun Road in Greenwood.

Marion Moore speaks against the annexation and rezoning of property on Calhoun Road in Greenwood.

Joe Langley, who owns property near the potential residential development, speaks Monday against the annexation and rezoning of the property during the Greenwood City Council meeting.

Jimmy Faulkner, whose land is beside the potential development, spoke against rezoning the property to high density zoning.

After removing about 40 acres of land owned by Greenwood CPW on Old Laurens Road for a potential economic development project from the City of Greenwood, City Council took the first step on its second annexation of land for future housing developments in the past few months.

Council voted unanimously to approve annexing land on Calhoun Road in Greenwood and voted 4-2 to rezone the property. Council members Patricia Partlow and Niki Hutto voted against the rezoning ordinance. Another vote will need to take place before the property’s annexation and rezoning take effect.

“Put yourself in our shoes when you make this decision,” said Joe Langley, who lives near the potential development.

Langley bought enough land to put a 1,000-foot buffer between his property and the potential development.

“I don’t oppose the city doing annexation,” said Marion Moore, another property owner. “I think the city needs to step back on the annexation of this property.”

Moore cited environmental concerns about a development on this property as well as the density.

Developer R.T. Bailey’s annexation and rezoning request called for almost 40 acres to be added to the city’s limits and rezoned to R-7, high-density residential zoning with 6,000-square-foot minimum lot sizes and a maximum of seven housing units per acre.

As the developer of Milford Pines, another development zoned for R-7, Bailey frequently takes advantage of the city’s infrastructure reimbursement program for streets and storm drainage in the public right-of-way. Council recently accepted Milford Pines phase two into the program.

The Johns Creek subdivision would be similar to the Milford Pines development, zoning application documents said.

“My backyard will be in the backyard of this development,” Langley said.

“My property has the longest line of adjacentment,” Faulkner said.

Faulkner said he does not want to look off his back porch and see 120 houses.

“I plead with you fine folks,” Faulkner said. “Don’t put three front doors on one acre.”

Residents were also concerned with the water runoff, silt deposits and chemicals changing the ecosystem of the land in addition to the number of houses that could be placed on the property.

“We have folks who are desperate to move into our area,” Mayor Pro Tem Johnathan Bass said. “They don’t have anywhere to live.”

Calhoun Road has seen a number of new developments in the last year. Bailey is building Clairborne, a duplex-style development that will feature 76 units targeted at an older population across the street from the property discussed at Monday’s council meeting. Less than a mile down the road, Hamilton Park Apartments are going up across from the YMCA.

In March, council members voted to annex more than 78 acres on Florida Avenue into the city’s limits. Mark III Properties intends to develop the land for residential development although the land has not been rezoned. The developer has twice requested the property be rezoned but withdrew both requests prior to the planning commission meeting.

Council also appointed Walter Roark to replace Calhoun Mays on the Board of Architectural Review. Mays must roll off of the body for at least one year. Council members appointed Bryson Bouknight to replace Shelia Reynolds on the City/County Planning Commission. Last year, Reynolds notified council she had moved outside of the city limits.

In February, council voted to change the residency requirement for appointees to the planning commission and the zoning appeals board. The change gave flexibility in the appointment process for boards and commissions. Greenwood City Manager Julie Wilkie said at a previous meeting that the city has trouble filling seats at times because of residency.

Despite the change, the body chose to appoint Bouknight, a city resident, over Reynolds, who has continued to serve on the planning commission until an appointments is made. Her term expired in November.

Council also voted on first reading to amend the 2021 budget to give city employees one-time recognition pay using an unappropriated fund surplus. The amendment to the budget also directs money from the same account to repair two locations in the city where stormwater drains need repairs.

The body took its meeting behind closed doors to discuss a contractual arrangement for the potential use of property located on Griffin Avenue. The city owns land behind the old Seaboard Recreation Center which was recently sold to D.J. Swearinger, a defensive back with the New Orleans Saints and a Greenwood native. Swearinger bought the old Rec building, also known as the R.L. Stevens Center, for $33,000 earlier this year and intends to develop it into a community center.

The Stevens Center has been closed since at least 2009 when the building fell into disrepair. Greenwood County Council had public meetings to hear ideas about what to do with the property and later deeded the property to the Rev. Darlene Saxon to develop it into a center called Beyond the Walls Family Restoration Center.

For the past 11 years, little progress was seen on a new center.

Josh Norman, a Greenwood High teammate of Swearinger and a defensive back with the Buffalo Bills, recently opened the Starz24 Josh Norman Teen Center. The loss of the Seaboard Rec Center drove Norman, who spent time at the recreation center, to give back.

Swearinger is hosting a fundraiser for his center Friday in Columbia.

Council also heard from two residents during public appearances. Velma Wardlaw of the Westside Planning Team gave an update on progress made in the community. The city plans to demolish several houses which have been condemned.

Michael Berry spoke to council against the city’s mask ordinance.

“We are tired of having our civil liberties oppressed,” Berry said.

He said council is relying too heavily on advice from the hospital and mainstream media.

Council will discuss its next steps with the mask mandate at a special called meeting tentatively scheduled for May 3. The mask ordinance is set to expire at 8 a.m. on May 10.

Edinson Cavani to stay another season at Manchester United

'Like witchcraft': The strange methods Republicans are using in recount

Inside an underground movement fighting for women's rights