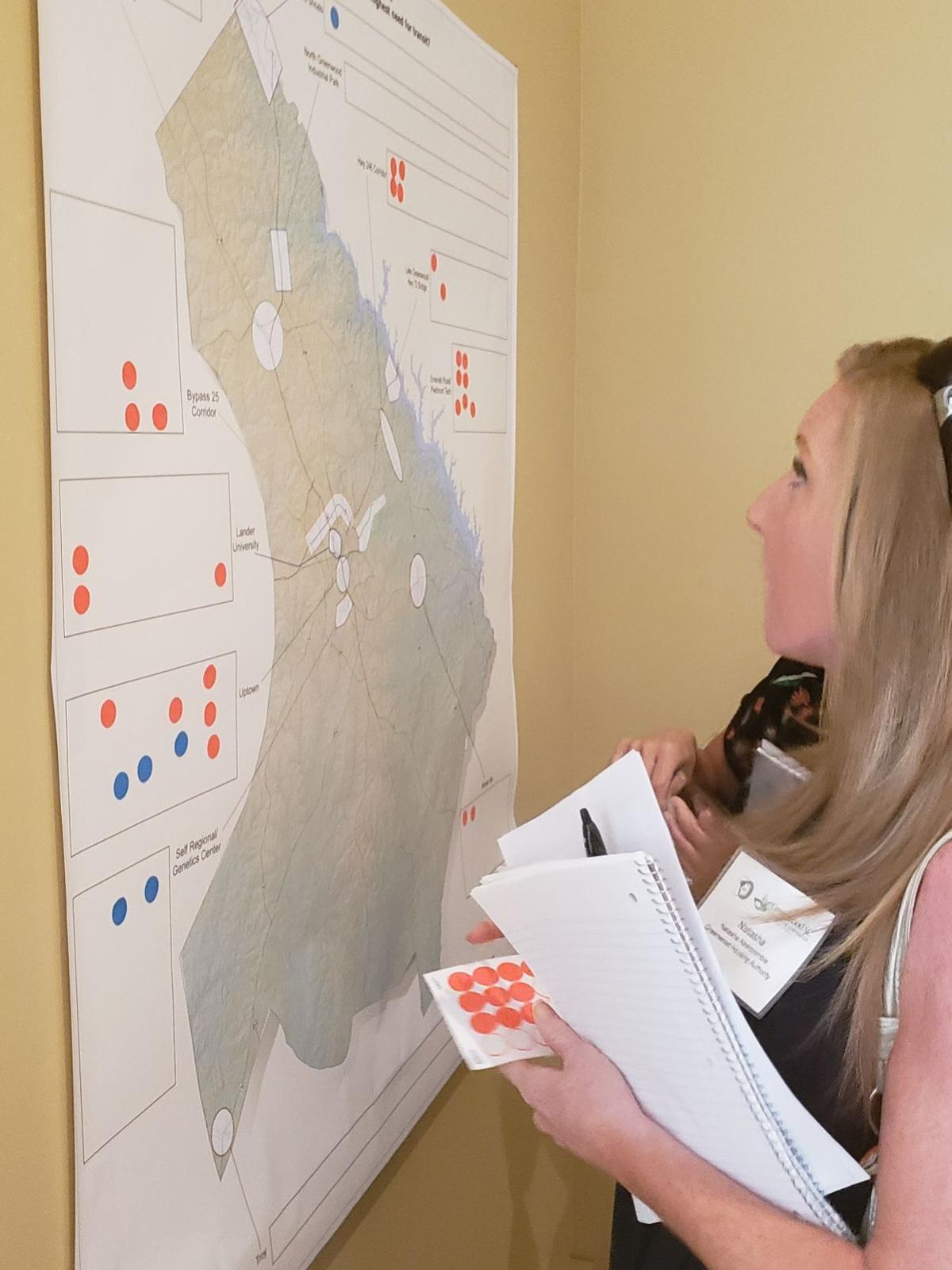 Participants in a Monday afternoon workshop on public transit in Greenwood affix stickers to a map of the county, indicating where they think the service would be most critical. 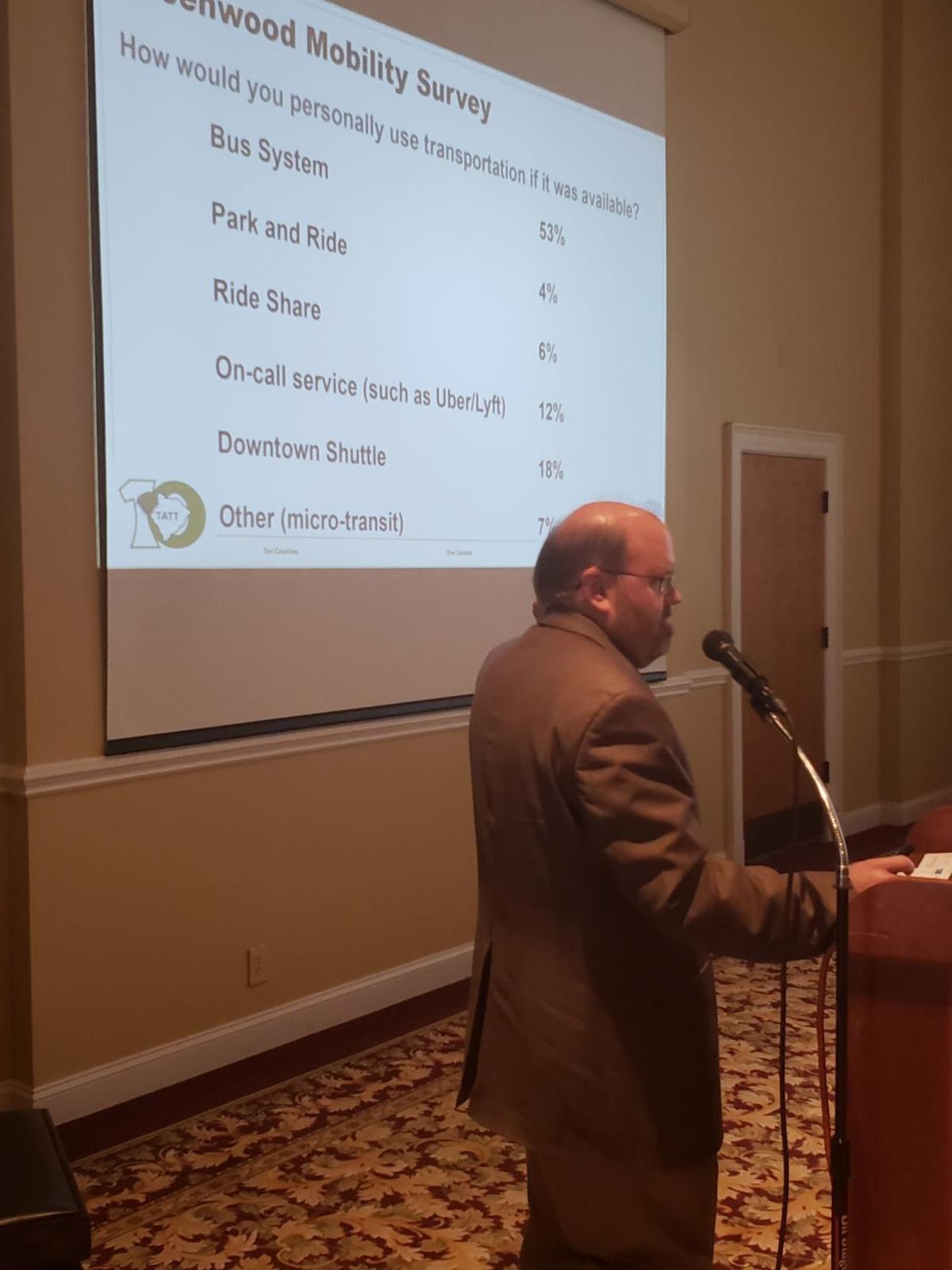 Ten at the Top executive director Dean Hybl unveils results of a public transit survey Monday during a workshop in Greenwood.

Participants in a Monday afternoon workshop on public transit in Greenwood affix stickers to a map of the county, indicating where they think the service would be most critical.

Ten at the Top executive director Dean Hybl unveils results of a public transit survey Monday during a workshop in Greenwood.

A Disney-style monorail linking Uptown Greenwood to key employers and commerce centers? Or what about using church buses on weekdays as commuter shuttles?

From the fantastical to the practical, those concepts and others were floated Monday during a workshop on mobility models that could give Greenwood County leaders ideas about how public transportation can be incorporated into the daily lives of its residents.

“Mobility and transportation is an issue in every community, regardless of whether you’re in Greenville or Spartanburg where they sit on that parking lot called I-85 for a number of hours every day, or a community like Greenwood or Gaffney or Union,” Ten at the Top executive director Dean Hybl said. “There are people all over who don’t have access to transportation and so that reduces their ability to reach their human potential to have a good job, to have good health care, all of these issues.”

The organization, which works to promote economic development and quality of life in the 10-county Upstate region, hosted Tuesday’s session.

“The traditional idea of public transportation is a bus system ... but what we also wanted to do is look at other alternatives and types of transportation fixes that have been very successful in other communities that don’t take the structure, the cost, some of these other pieces that some kind of a fixed system will take,” Hybl said.

While Greenwood doesn’t have that luxury, Scott said the Upstate community has been able to forge partnerships with neighborhood communities and Clemson University to create a bustling public transit system that sees more than 500,000 rides annually.

On a smaller scale, Lander University is proving its worth as a public transit partner, said Greenwood Partnership Alliance CEO Heather Simmons Jones.

“Oftentimes, I think public transportation is the proverbial elephant that communities deal with, and we can’t bite it off with one, comprehensive, solution but maybe we can look it from an alternative solution that when we collaborate, we come up with little pieces,” Simmons Jones said.

In December 2017, Lander launched a shuttle service to transport students, faculty and staff from campus to Uptown Greenwood and other areas, at no cost. Eight months later, Clemson University opened its Center for Human Genetics on the Greenwood Genetic Center campus — creating an opportunity for two state-run higher education institutions to collaborate.

Many of the facility’s faculty, staff and students are international and don’t have a driver’s license, Simmons Jones said.

Through a series of phone calls and meetings, Simmons Jones helped broker a partnership between the two schools — based, she said, on a recommendation by the state.

“I said, ‘What would the opportunity be for you all to be a collaborative partner with Clemson, since you’re both state entities,’ and the immediate response we got was, ‘The state wants us to be more collaborative with other state institutions,’” Simmons Jones said.

As a result, Simmons Jones said, Lander has agreed to pick up Clemson students with a valid ID and transport them along the same routes as the Lander Line.

“I think that is really a prime example of, when you want to accomplish something and willing to work together, you can do it. You can say ‘Yes,’” she said.

As part of Tuesday’s workshop, Ten at the Top conducted a survey among registrants, using responses from 49 people including representatives from nonprofits, the public sector and business leaders to generate data on how a regional transit system could fit into the area

About two-thirds of respondents — 67% — said a transit system would be most beneficial for employment needs, with access to health care options behind that.

“I think we all like our car and the freedom it provides, but the reality is that when we go other places, we’re used to using some form of transportation that isn’t a personal vehicle,” Hybl said. “So if it was reliable and if it was affordable and if it came on a regular basis, some people would use it, and that’s what I glean from these numbers.”

5 things to know today - that aren't about the virus

LAFC will seek new name for Banc of California Stadium