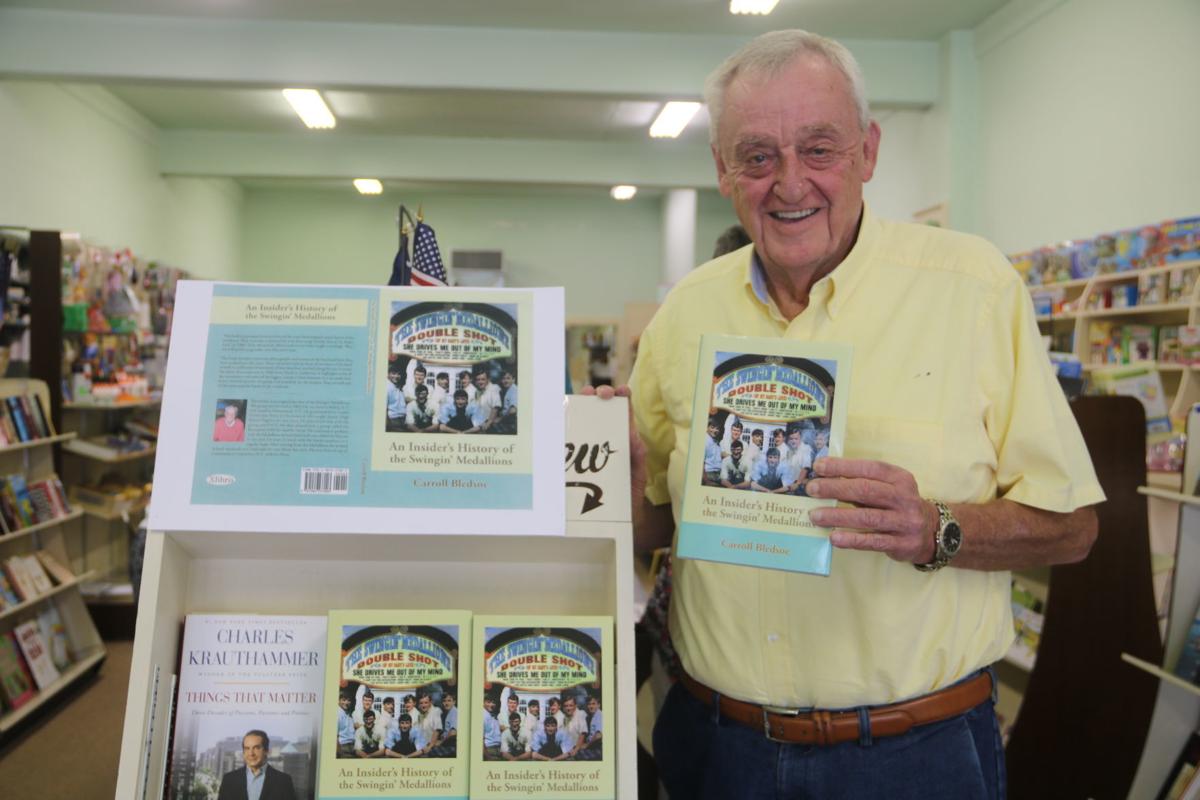 Carroll Bledsoe, one of the founding members of The Swingin’ Medallions, wrote a new book detailing the stories and adventures the band went on during its wildest years. 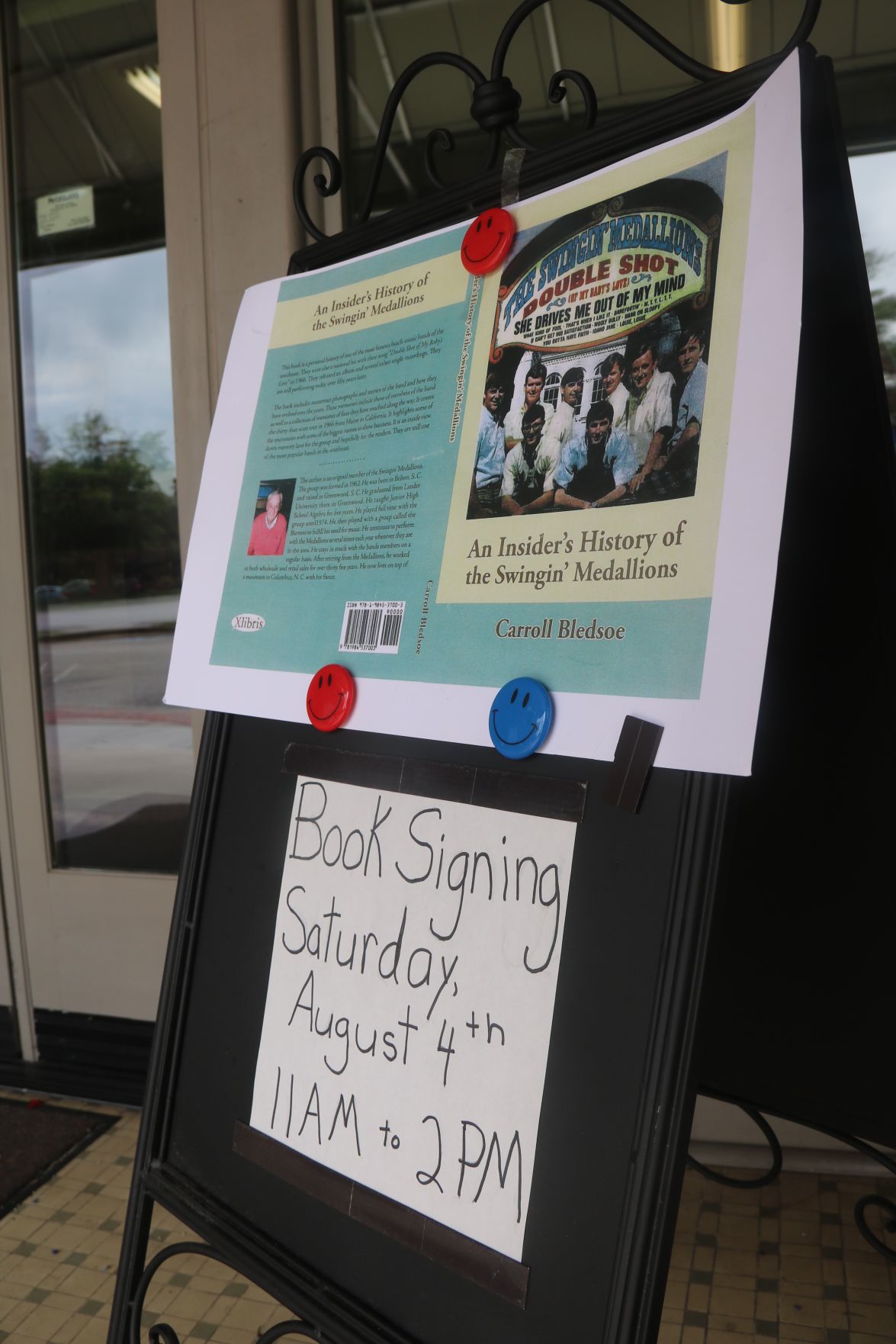 On Aug. 4, Carroll Bledsoe will be joined by other founding members of The Swingin' Medallions to sign copies of his new book, which gives an insiders take on the history of the band.

Carroll Bledsoe, one of the founding members of The Swingin’ Medallions, wrote a new book detailing the stories and adventures the band went on during its wildest years.

On Aug. 4, Carroll Bledsoe will be joined by other founding members of The Swingin' Medallions to sign copies of his new book, which gives an insiders take on the history of the band.

In his late-70s, Carroll Bledsoe still knows how to rock.

He was 76 years old last August when he was playing an Upstate bar with fellow founding members of the legendary Greenwood beach music outfit The Swingin’ Medallions when someone gave him a bright idea.

“I played with the Medallions at Chiefs Wings and Firewater last year and I was chatting with this guy about the old days,” he said. “That’s when he told me ‘You know, you really need to be writing this down.”

That’s exactly what Bledsoe did and his book, “An Insider’s History of the Swingin’ Medallions,” tells the band’s stories from the early years along with their glory days following their hit “Double Shot (Of My Baby’s Love).”

The book starts off with Bledsoe recounting how he got into music in high school, and his years at Lander University performing in a small band with fellow Medallions founder and frontman John McElrath. The Medallions truly formed in 1962.

“The book covers all the founding of the Medallions, and it goes through what all we went through recording ‘Double Shot,’” he said.

After releasing “Double Shot” and landing high on the U.S. Billboard Top 100 chart, the band went on a whirlwind tour that covered more than 30 states in three months. While in Los Angeles for two weeks, Bledsoe said they played on Dick Clark’s show, played for Casey Kasem and were invited to play during Tina Sinatra’s 16th birthday party.

Sinatra’s party drew a crowd of about 500, Bledsoe said, and the band was starstruck.

“Every one of them was some sort of celebrity we’d been watching on TV all our lives, so we were terrified,” he said. “We were nervous after we played our set and we were at the bar. Frank Sinatra came in, you know, and he checked on us, made sure the bartender was treating us right, and then he said everyone enjoyed it so much he asked us to come up and play another few sets.”

Whether it was connecting with James Brown in Atlanta or making friends with burly Hawaiian club bouncers to get a private tour of some of the islands’ most beloved locations, the book is packed with colorful stories about the band and their journeys. Along the way, Bledsoe said the band made fans across the country and touched people’s lives in surprising ways, and he’s tried to capture that in the book.

“You don’t realize what kind of impression you’re making on people until after the fact,” he said.

With 2016 being the 50th anniversary of “Double Shot,” Bledsoe said it felt like the right time to put these stories to page. He worked alongside fellow founding members, friends and fans alike to dig through stories to print.

“The more I started writing it, the more I could remember,” he said. “Once you start writing it’s amazing how easy it goes.”

“An Insider’s History of the Swingin’ Medallions” is available online at Amazon and Barnes and Noble, along with most other online book retailers. From 11 a.m.-2 p.m. Aug. 4, Bledsoe and others from the band will be at McCaslan’s Book Store selling and signing copies of the book, along with 8-by-10-inch copies of the photo on the book’s cover.

Six years ago he was fleeing war.This year he is competing at the Olympics