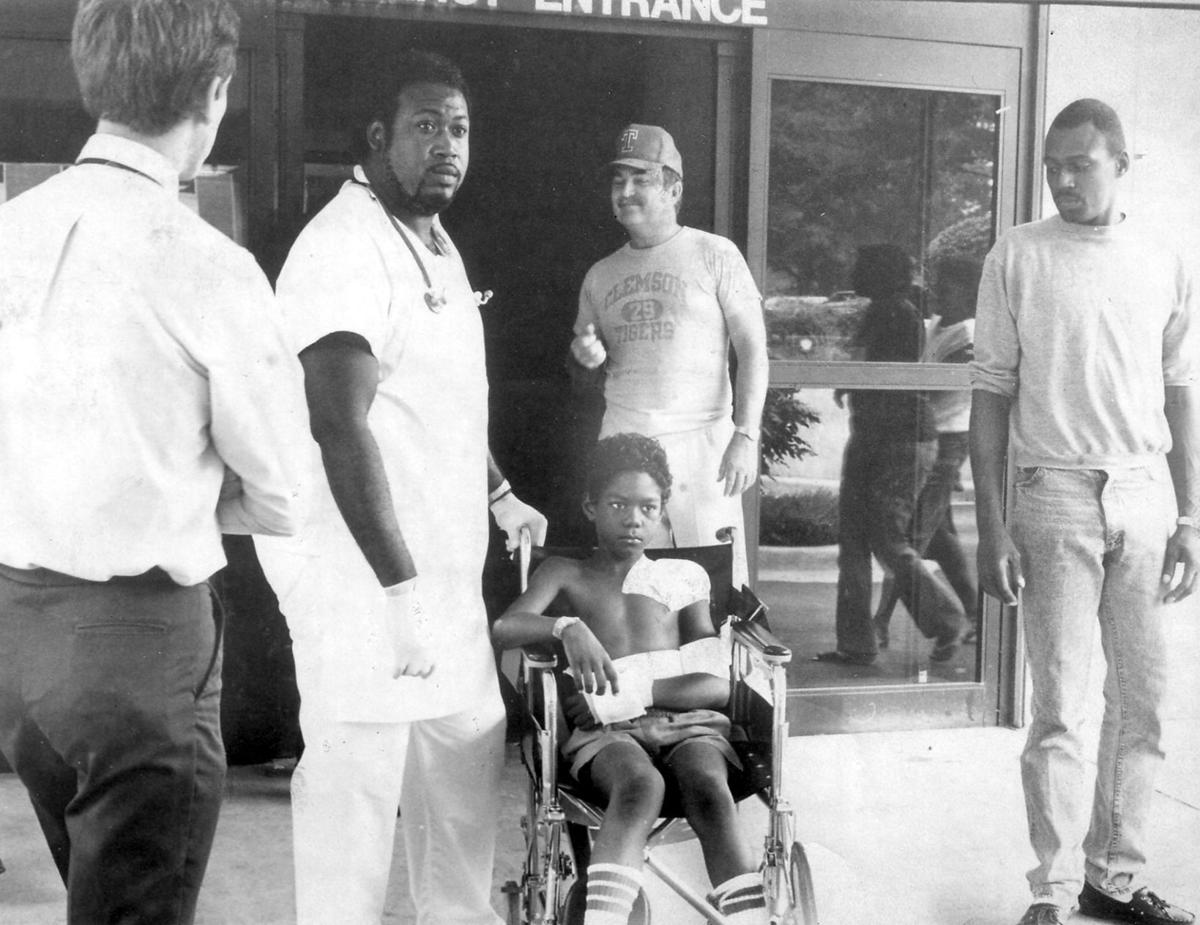 In this undated photo, a child is released from the hospital following the school shooting at Oakland Elementary School in Greenwood, South Carolina. 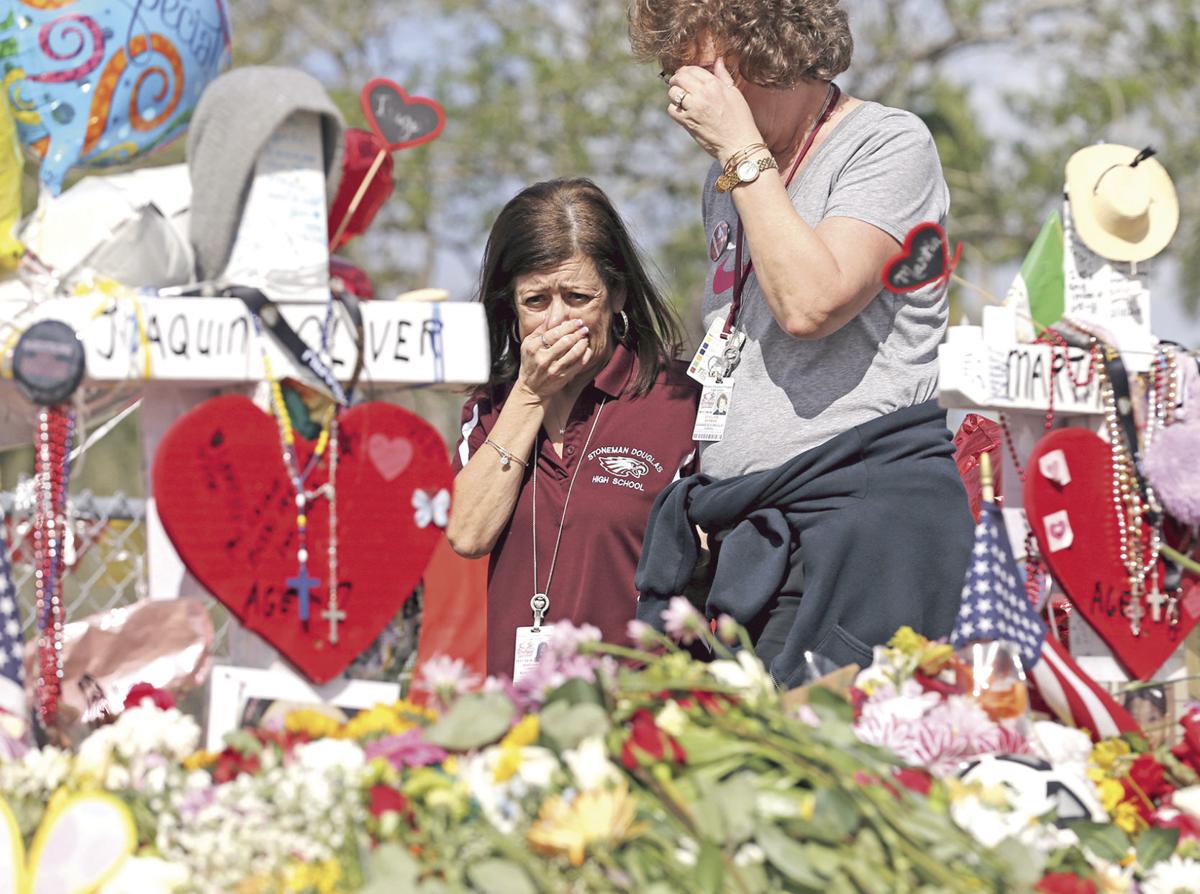 Marjory Stoneman Douglas High School administrative employees Margarita LaSalle, left, and JoEllen Berman walk along the hill near the school lined with 17 crosses to honor the students and teachers killed on Valentine’s Day in Parkland, Fla.

In this undated photo, a child is released from the hospital following the school shooting at Oakland Elementary School in Greenwood, South Carolina.

Marjory Stoneman Douglas High School administrative employees Margarita LaSalle, left, and JoEllen Berman walk along the hill near the school lined with 17 crosses to honor the students and teachers killed on Valentine’s Day in Parkland, Fla.

Over the last 30 years — from the 1988 Oakland Elementary School shooting in Greenwood to the massacre that left 17 dead in Parkland, Florida on Valentine’s Day — the same visual narrative has played out as American communities try to cope with the loss of life inside what should be a sanctuary.

It’s a pictorial that policymakers, educators and residents across South Carolina are intent on never revisiting.

In 2016, the American Medical Association adopted a policy deeming U.S. gun violence a “public health threat.” But studying the issue is a challenge, since the federal government is barred from researching the topic — the result of an amendment tucked into a 1997 appropriations bill signed into law by former President Bill Clinton.

Congress hasn’t approved any gun laws since 2007. Through that lens, the Index-Journal has embarked on this special project as a way to prompt more discussion about steps that can be taken to ward off the unthinkable from ever happening here again. So, what is being done right now?

“From the moment a child boards the morning school bus or a student passes through their school doors, no parent should ever have to worry if their child will be safe,” Molly Spearman, the state’s superintendent, said in a recorded video message that was disseminated to reporters on Wednesday. “No teacher should ever have to fear for the safety of themselves or their students.”

The state will begin a comprehensive review of all student and school safety policies and procedures, she said, looking at methods to enhance them or close gaps that may exist.

The two-minute video message was recorded a week after the Valentine’s Day massacre at Marjory Stoneman Douglas High School in Parkland, Florida, where 19-year-old Nikolas Cruz killed 17 people with a legally purchased AR-15.

Spearman urged continued vigilance in communities, and said nobody should be afraid to tell authorities about a safety concern.

“Many potentially dangerous situations across our state and nation have been avoided because a parent, student or teacher notified the proper authorities,” she said.

In the General Assembly, several measures have been introduced to make school campuses safer.

State Rep. Mike Pitts, R-Laurens, is joining Sen. Mike Gambrell, a Honea Path Republican and Lt. Gov. Kevin Bryant of Anderson in drafting a bill that would allow teachers to carry concealed weapons in the classroom.

Gambrell said he’d like to see an end to advertising “gun-free zones.”

“Whether you are a school that’s a gun-free zone or not, not knowing may put that ounce of doubt in that person that wants to do something awful,” he said. “Anything we can do to put that doubt in a person’s mind.”

Securing South Carolina schools is not a party-line issue. State Rep. Marvin Pendarvis, a Democrat from North Charleston, plans to file a measure requiring every district to hold monthly active shooter drills for students and teachers, with additional annual training for teachers.

“It’s a conversation that no one wants to have, but we have to have it,” Pendarvis said. “It’s the same reason we do fire drills, but we haven’t had a major school fire in a number of years.”

Active shooter drills is one of 62 recommendations included in a 2015 School Safety Task Force report submitted to the General Assembly.

Among its other suggestions: Replace zero tolerance policies with bullying prevention, threat assessment and restorative justice.

“Three programs shown to reduce risk of violence or disruption,” the report says.

In the week since Parkland, other Democratic lawmakers have come forward with a package of reform proposals: State Rep. Wendy Brawley is calling for an assault weapons ban, Sen. Marlon Kimpson, of Columbia, is looking to close the so-called “Charleston Loophole” that gives the FBI three days to take action if a gun buyer is flagged by a background check and Todd Rutherford, of Columbia, is proposing a bill that would prohibit the sale of AR-15s to people under the age of 20.

But other common sense practices can be taken to ensure the safety of students, he said.

“We can lock the doors from the outside and have one entry point. We can certainly enforce current laws that are designed to prevent certain persons from purchasing weapons through background checks,” he said. He also indicated support for allowing armed teachers in classrooms.

David Hollister, a member of the private Facebook group Parents for School Safety created for those those with students in Greenwood County School District 50, suggested similar ideas.

“There are great difficulties in trying to change our society, so the schools need the funds for an increased number of resource officers, staff training and equipment to improve the security of our schools. Secure and reinforced doors, monitoring equipment and the personnel to deal with immediate issues, but the personnel to deal with student and family emotional issues is a long term better solution,” he said. “Address how a person comes to the conclusion that killing people is an answer to their problems and you also address the problem we’re facing this week.”

The facility will be led by Dean Kilpatrick.

Here’s how the project is described in an Oct. 2 MUSC newsletter: “His team will be responsible for developing a way to bring fast and comprehensive services to help those affected by a mass casualty event. ‘Our job is not to figure out who is doing this but to figure out how to help those affected by it — the survivors, victims’ families and first responders. We need to be able to respond quickly. This is about trying to really help the nation do a better job when these things happen.’”

Trump is directing the Justice Department to ban devices such as the rapid-fire bump stocks used in last year’s Las Vegas massacre.

“We must do everything possible to ensure safety for our children. We need to make sure thorough background checks are done on individuals purchasing guns. We also need to look at individuals being able to purchase those type of assault weapons. They are not hunting weapons,” Nicholson said.

Grassroots activism is another catalyst for reform, says Jack Logan, founder of Put Down the Guns Now Young People, a Greenville-based nonprofit.

“It goes back to the community,” Logan said. “Principals and teachers should be able to solve problems in their classrooms. I want to see every parent search their child’s book bags and vehicles and know who they’re picking up and giving rides to. I think you have to be in front of kids to remind them constantly and send that message to those people. It goes back to our prosecutors in our courtrooms. They have to be tougher on gun violence.”

A Greenwood police officer echoed calls for stronger family engagement as a deterrent to tragedy.

“The only real solution will be for parents to engage their kids regularly and get them to talk about their lives,” Greenwood Public Information Officer Jonathan Link wrote in an email. “Parents are the first (and sometimes only) people kids will trust, and if parents show genuine concern and listen to their kids, then that will allow the child to process their emotions in a normal fashion.”

The same sentiment ran deep for Springfield Elementary School PTO President Cynthia Fesler, who was shaken by the news from Florida. She said she felt as if there’s been a cultural shift toward hands-off parenting, which leaves blind spots where parents might not be aware enough to intervene if their child is acting oddly.

It takes a holistic approach, said Greenwood County Sheriff Dennis Kelly. Watchful eyes from all aspects of society are the best way to prevent shootings, he said.

“We rely on family, friends, teachers, citizens, mental health services and social media,” he said. “They may hear or notice someone talking about doing something and they notify the school resource officers or any other authorities.”

Madison Hill, a senior at Emerald High School, is holding her district leaders to account. On Feb. 7, Emerald experienced a bomb threat. She told trustees at a meeting last week her teacher didn’t have a key to lock the door, and not all doors can be manually locked.

The threat was lifted within 30 minutes. The next week, Emerald held an active shooter drill that Madison said was not taken seriously by students and many staff members.

“Students are scared and we need to have real discussion about this issue in our schools. Allow us to provide feedback, because we can help you more than you think,” Hill said.

She also wanted to know whether Emerald High School had counseling available for students outside of their guidance counselors.