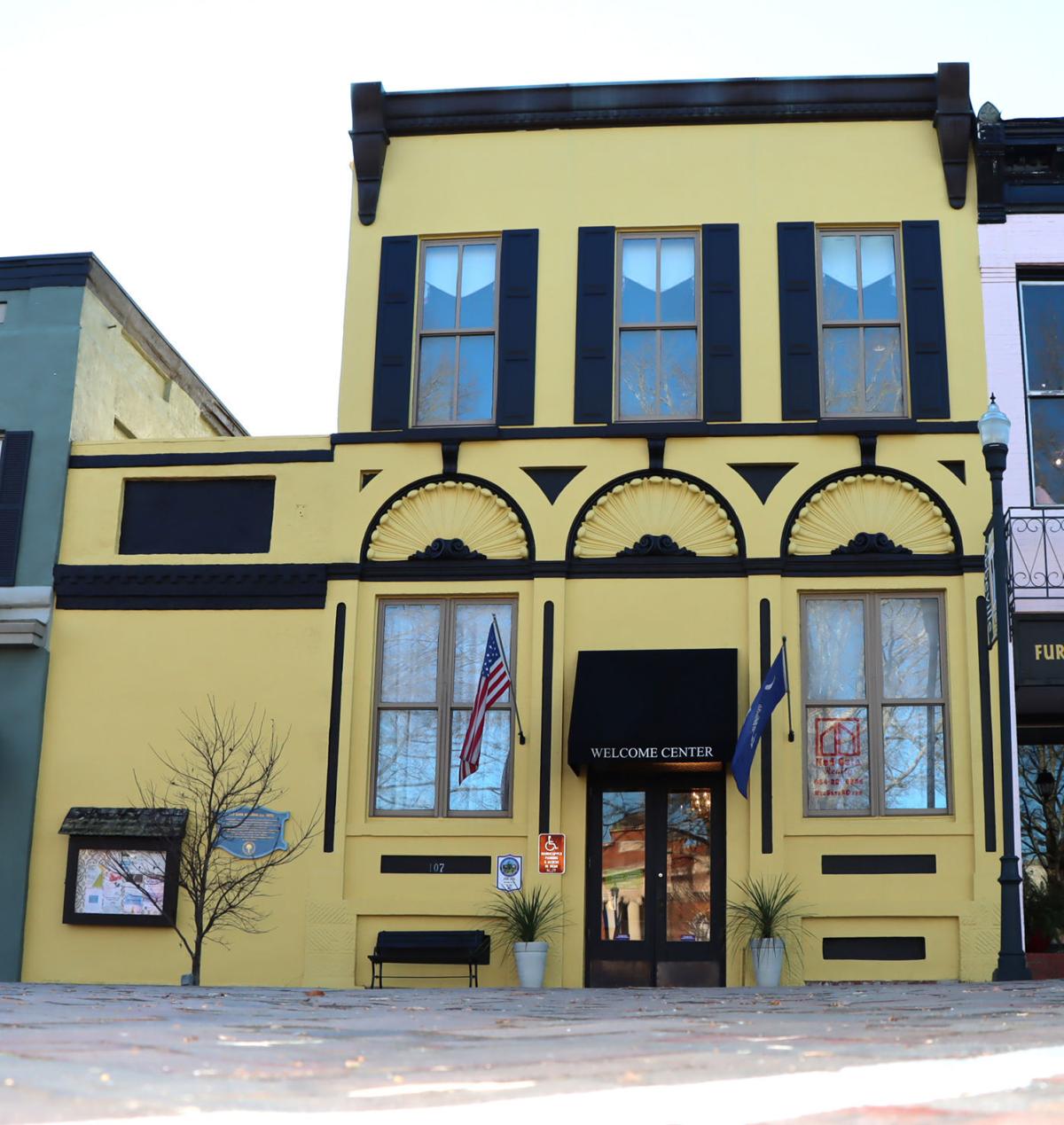 The city's incubator space is located on the second floor of the building that houses the Greater Abbeville Chamber of Commerce. 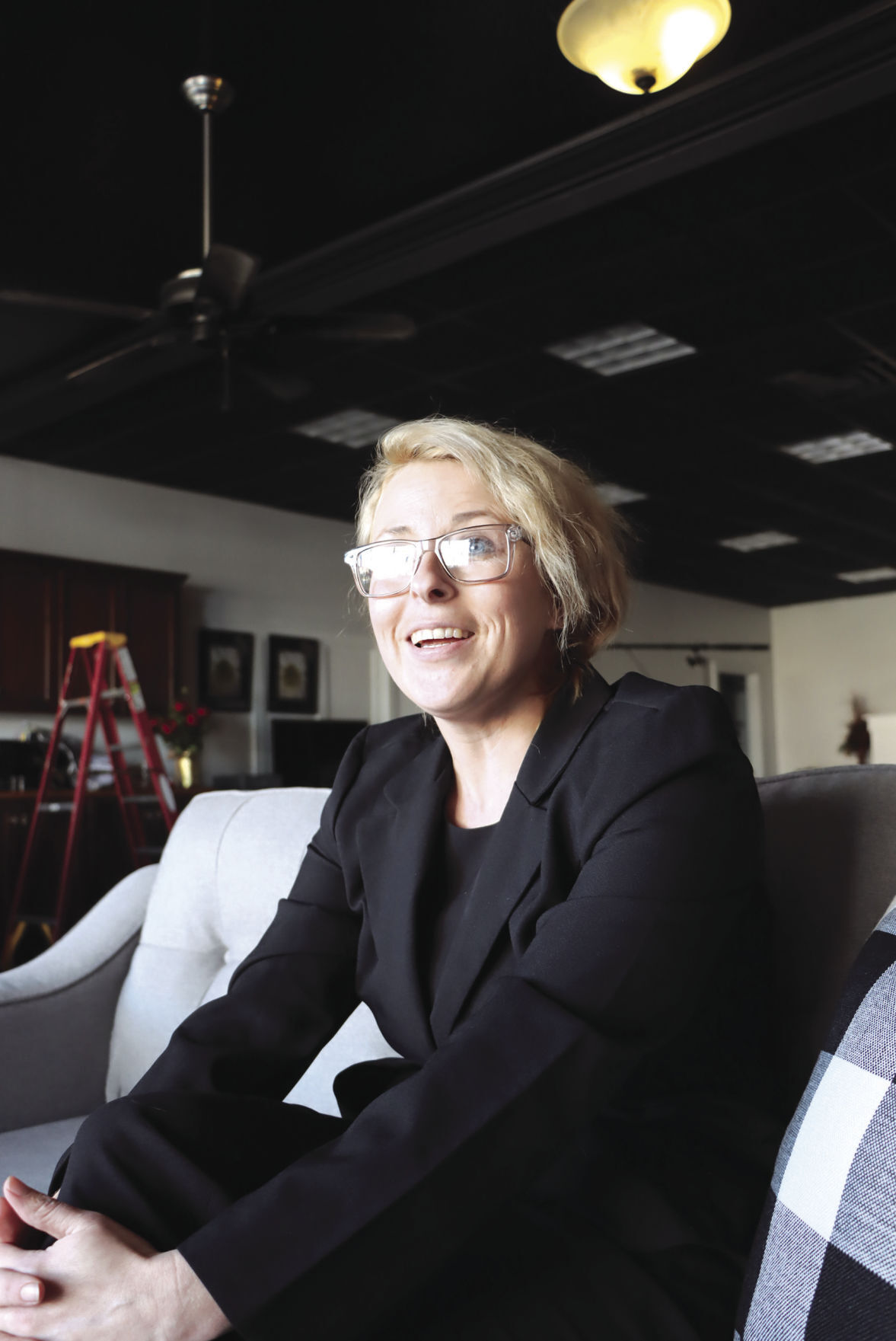 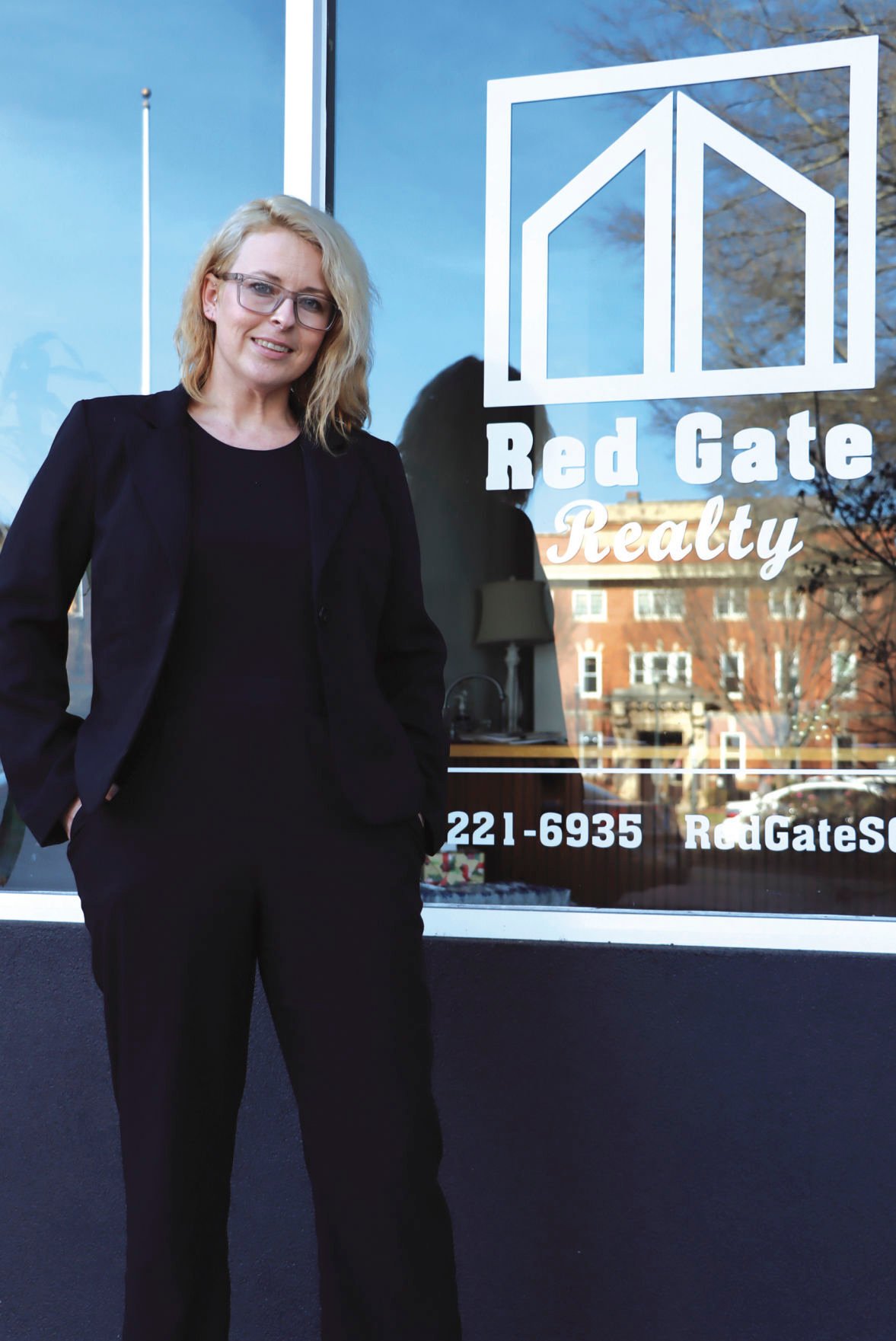 Melissa Cowart moved to Abbeville to establish Red Gate Realty. It’s a decision she and her partner, David Bliss, have not regretted. 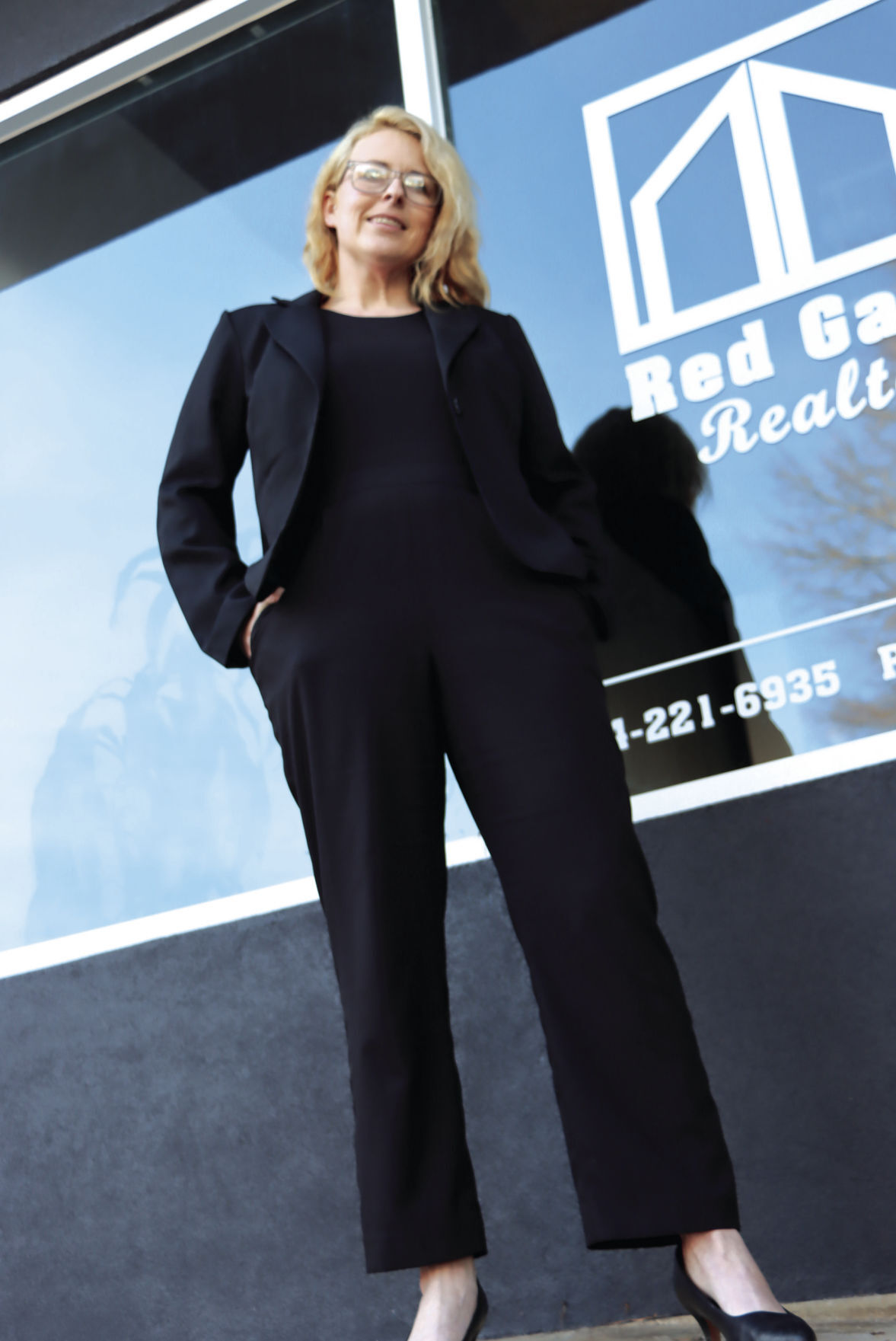 Melissa Cowart with Red Gate Realty lauded the support she received from the city's incubator program to establish her business. 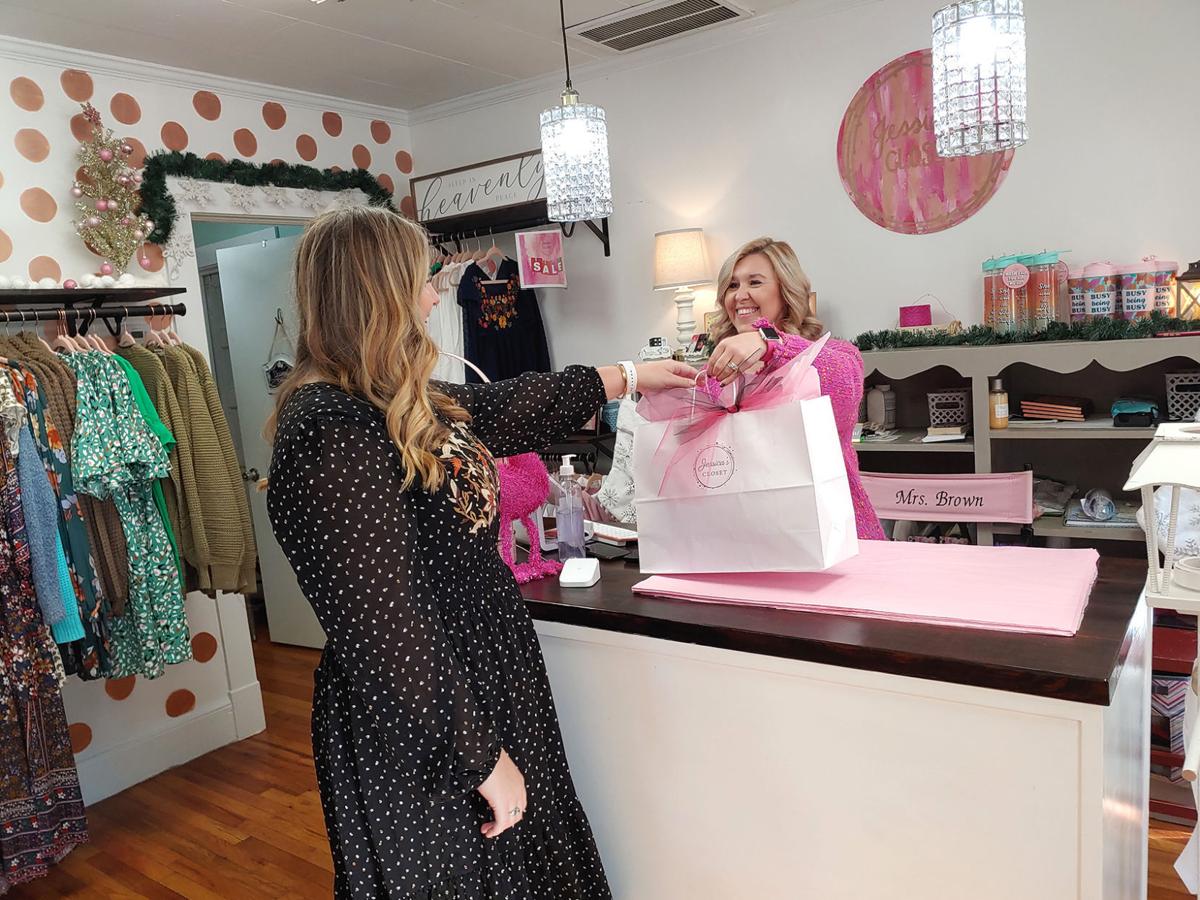 Jessica Brown hands a bag to Graceann Dubose during the Christmas shopping season at her business, Jessica’s Closet. 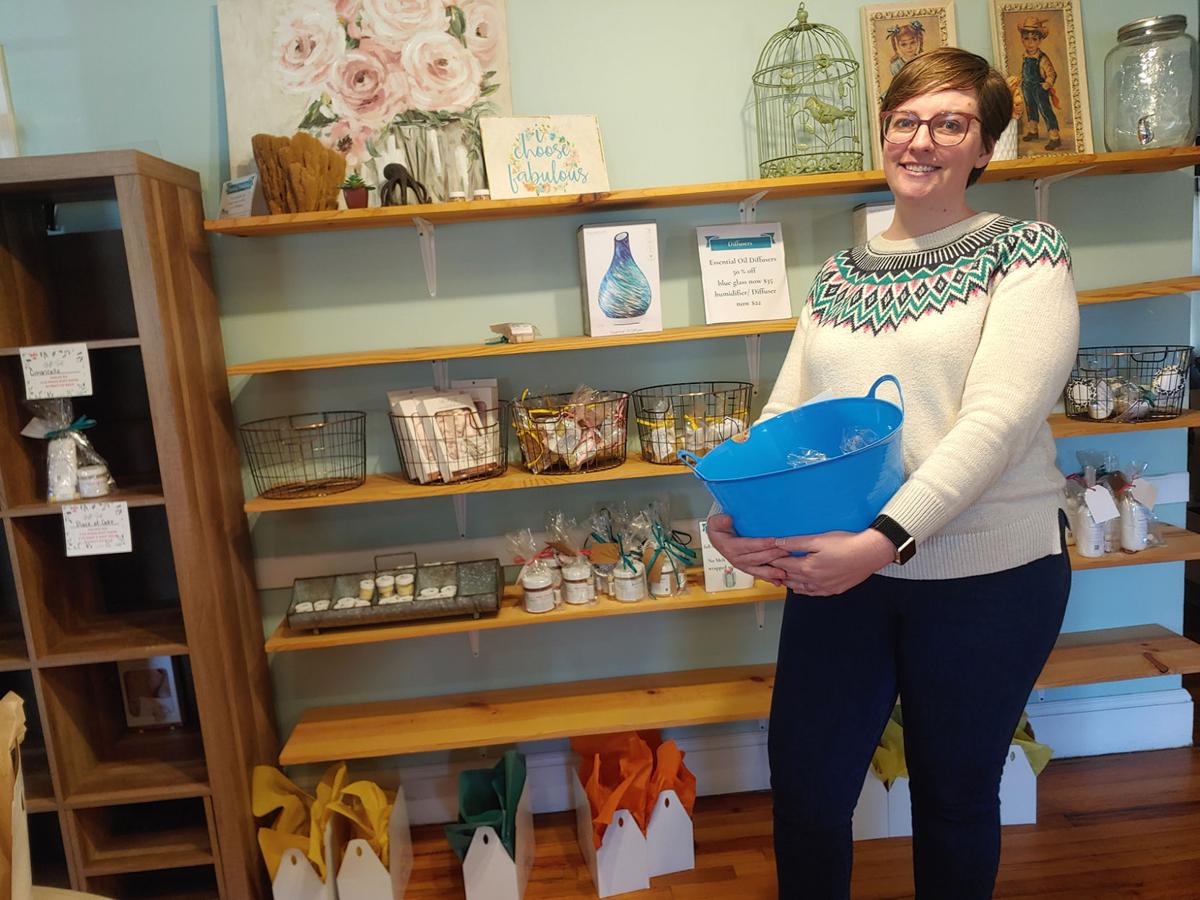 Paige Bowser devoted a section of Breezy Quarters to an incubator help out new entrepreneurs. 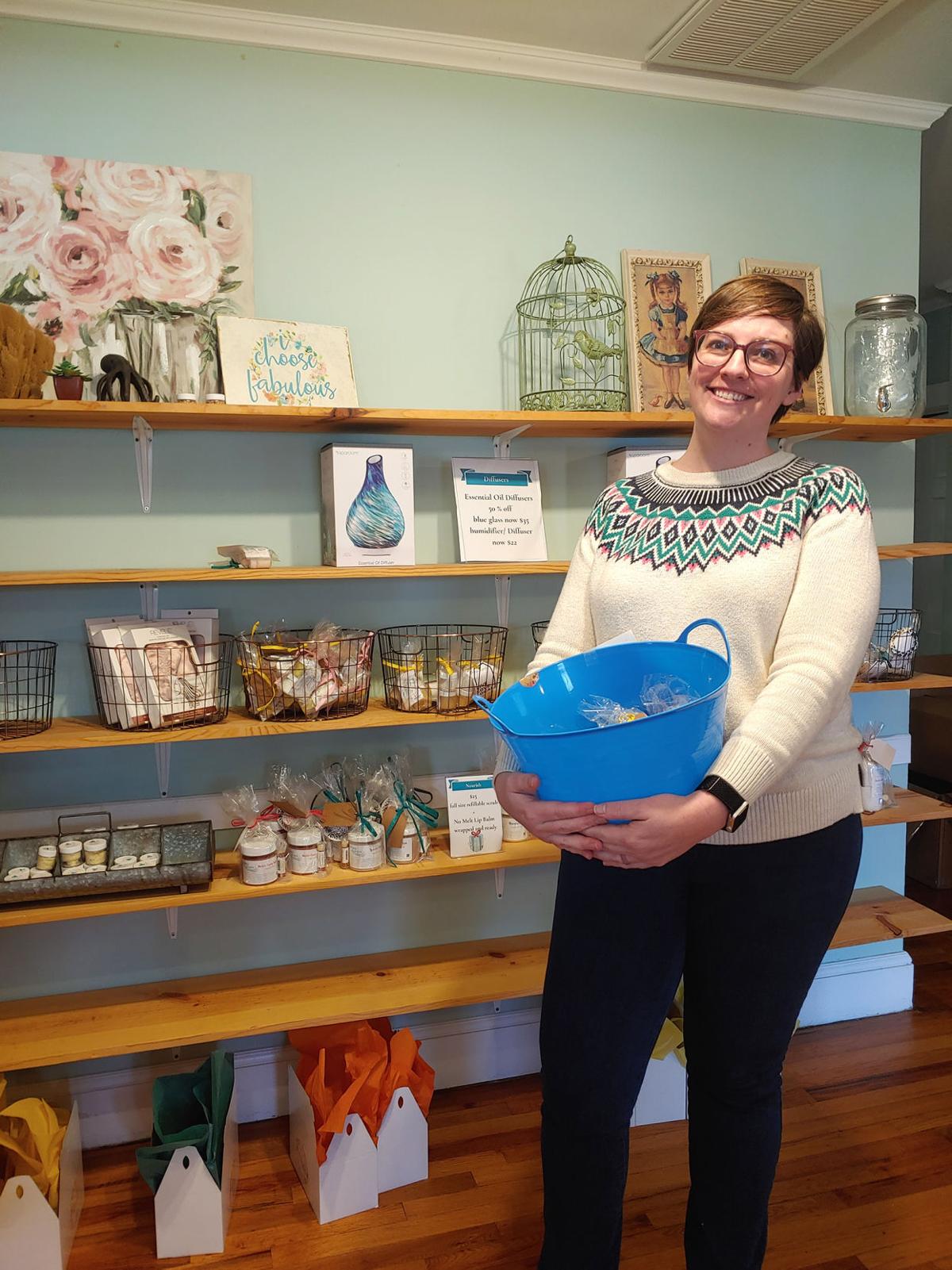 Regarding mentorship, Paige Bowser said an impact is an impact whether it's on a small scale or large. If it's improving the community, then it's a good thing to do.

The city's incubator space is located on the second floor of the building that houses the Greater Abbeville Chamber of Commerce.

Melissa Cowart moved to Abbeville to establish Red Gate Realty. It’s a decision she and her partner, David Bliss, have not regretted.

Melissa Cowart with Red Gate Realty lauded the support she received from the city's incubator program to establish her business.

Jessica Brown hands a bag to Graceann Dubose during the Christmas shopping season at her business, Jessica’s Closet.

Paige Bowser devoted a section of Breezy Quarters to an incubator help out new entrepreneurs.

Regarding mentorship, Paige Bowser said an impact is an impact whether it's on a small scale or large. If it's improving the community, then it's a good thing to do.

ABBEVILLE — Making your own way is a dream for many. That doesn’t mean you can do it alone.

In Abbeville, you don’t have to. The Greater Abbeville Chamber of Commerce is one answer. Incubators are other answers. They supply information, support and advice to move a business from an idea to bricks and mortar.

Consider Melissa Cowart and David Bliss. They moved to Abbeville from Greenwood in hopes of starting a business. Their location in Greenwood wasn’t satisfactory, she said.

“We were in the Greenwood Building on Maxwell Avenue in Greenwood. It didn’t have any street visibility there,” Cowart said.

She had heard about the incubator office while talking with Mike Clary, the city’s deputy administrative officer. Cowart and Bliss decided to make move and have a sign visible from the road.

The site for her business, Red Gate Realty, was the incubator space located above Abbeville’s chamber office. It provided the view she wanted.

She and Bliss moved into the building in February 2020 with a two-year lease just before the pandemic started.

“We felt Abbeville was a very welcoming place,” she said. “They charge low rents and utilities are included in rent. It allowed us basically to have a period of time to have affordable rents to build business enough to either move out or purchase a building.”

That is the purpose of the city’s incubator, according to Austin Walker, the city’s community development director. The incubator is a small part of the “entrepreneurial ecosystem” that is the social and economic environment provided by the city.

Business isn’t cultivated in a vacuum. It takes many entities working together, such as the chamber, the city, the Abbeville County Economic Development Partnership, the Downtown Merchants Association, private support service, the Freshwater Community Foundation and the Small Business Development Center.

“It was a rather easy application,” Bliss said of the incubator paperwork. From filing the application to getting it approved took about one week.

A couple of businesses have called about the incubator space, Walker said. Prospects have to have a business plan, an application and consider whether they will be in Abbeville. Businesses also have to have a website or an e-commerce traffic property — basically realty space on the web.

One of the topics: What is your target market? Does it live here? For example, a ski and snowboard shop in Abbeville might be a wrong business, Walker said.

Applications are reviewed. A decision can be made in a couple of weeks. The review committee is made of the community development director, the city’s chief financial officer and the assistant city manager.

The incubator was established as a landing pad and jumping-off point for new businesses to get acquainted with the city in a below-market rate space, according to Walker.

Nearly 18 months passed before Cowart jumped. She and Bliss bought one of the buildings on Court Square and moved Red Gate Realty to the site. They also provide space for two other businesses: Sage & Co., a hair salon; and an Airbnb.

“I fell in love with the view” at the original site, Cowart said. “It was a good overlook.”

“As soon as we saw it, it was a good value,” Bliss said. “We would have taken it that day.”

They knew a deadline was coming up and they started looking for another location. The previous owner had the current building for sale. She asked him about availability and financing. The owner offered to let them look at it and she “instantly fell in love.”

Financing was arranged through Abbeville First Bank, which wrote the loan, she said.

Help when neededWhile the city’s incubator provides support, sometimes more is needed. That is what prompted Paige Bowser, owner of Breezy Quarters and member of the Downtown Merchants Association, to create a separate incubator that has a mentorship facet.

Bowser said she didn’t get help from an incubator but can see where it could have been useful.

With rent, utilities and other bills, she said there’s not much room for a mistake if your bills are not controlled.

“Hindsight is always 20/20,” she said. “Most incubators don’t come with mentors. That’s where mine is unique,” she said.

Creating a business was a giant leap of faith, Bowser said. It’s exciting and terrifying.

The scariest part of opening a business is signing a lease.

“Your space is going to be your biggest expense, and that’s the tip of the iceberg,” Bowser said. “You sign that lease, you’re in for it. You’re going for it. You’re doing.

“Running a business is very hard, but it’s very rewarding. It’s mine, and I do what I want.

“Also, it’s good to have a mentor, somebody to tell you ‘Yes, it’s going to be OK.’ Having somebody next door to do that is really helpful.”

Bowser also wants to have some conferences on business-related matters.

“Women, especially in business, need to build up their confidence,” she said. “That’s why it’s important to have a support system and an incubator. Without a good support system, women in business are doomed.”

That system includes family, friends and having people offering advice, such as encouraging a business owner to take time off.

The best advice Bowser can offer? Read a lot. Take classes. Take advantage of all resources. She said there is so much that you have to learn. You can’t do it yourself.

Getting informationAdvice is what The Brew is about. Monthly meetings started in September. Small business owners gather to exchange information and talk about what they face operating a business.

Attendance at Brew meetings averages 25 people, from retirees to current business owners, people who are new to Abbeville and others who have lived here all their lives, Walker said.

“We’ve had new people show up every month,” he said.

Subjects that keep coming up involve marketing and social media — the best ways to gain social media followers and the need for a website — as well as small business financials, including the possible need for a CPA and tax credits that might be available. Walker said other subjects focus on regulatory issues, especially with food-service businesses, and state Department of Health and Environmental Control requirements and laws about selling items.

“There is no playbook,” Bowser said. “You have to figure it out, and a lot of times expert textbook lessons don’t mean a thing.

Cowart is a testament to using resources well, Walker said. She used resources and connections because she decided to be part of the incubator. Now she’s looking at things to fix on the building so she can apply for a small business grant.

“The only road map we had was to grow the real estate business,” Bliss said. “Being in Abbeville helped to develop the road map. It helped them develop a direction.”

Their business had a chance to plant roots, Walker said. Three businesses are in formerly empty properties.

This was an empty storefront, Cowart said about Red Gate Realty’s current location. She pointed out the people at Sage & Co. You hear people laughing, you see people parking in front of storefronts that were once empty. That is a way you can rate success.

“Women are coming here. They followed the stylists from Greenwood,” she said. “I promise you they are stopping at one of the coffee shops to get a drink. I bet you it’s a bigger impact than what we realize.”

Small businesses are important, Bowser said. People in the community might not realize how important a small business is until it is gone, “so they should make the effort to shop from their neighbors.”

Everybody talks about empty buildings and how sad it is, but if the community doesn’t support people in them, they will go away.

“We’re doing well in Abbeville,” Bowser said, “but we can always do better.”

The Greater Abbeville Chamber of Commerce will host a business licenses class at 8:30 a.m. Wednesday. It is for all business owners.

Discussion will focus on why licenses are needed and changes expected to happen this year. The class is part of the chamber's Small Business, Big Ideas program.

From sports to music, Ethan Richardson marches to his own tune

New Faith Tabernacle gives back for the holidays

Nation's largest abortion protest could be last under Roe

Text of Democratic response to SC State of the State speech