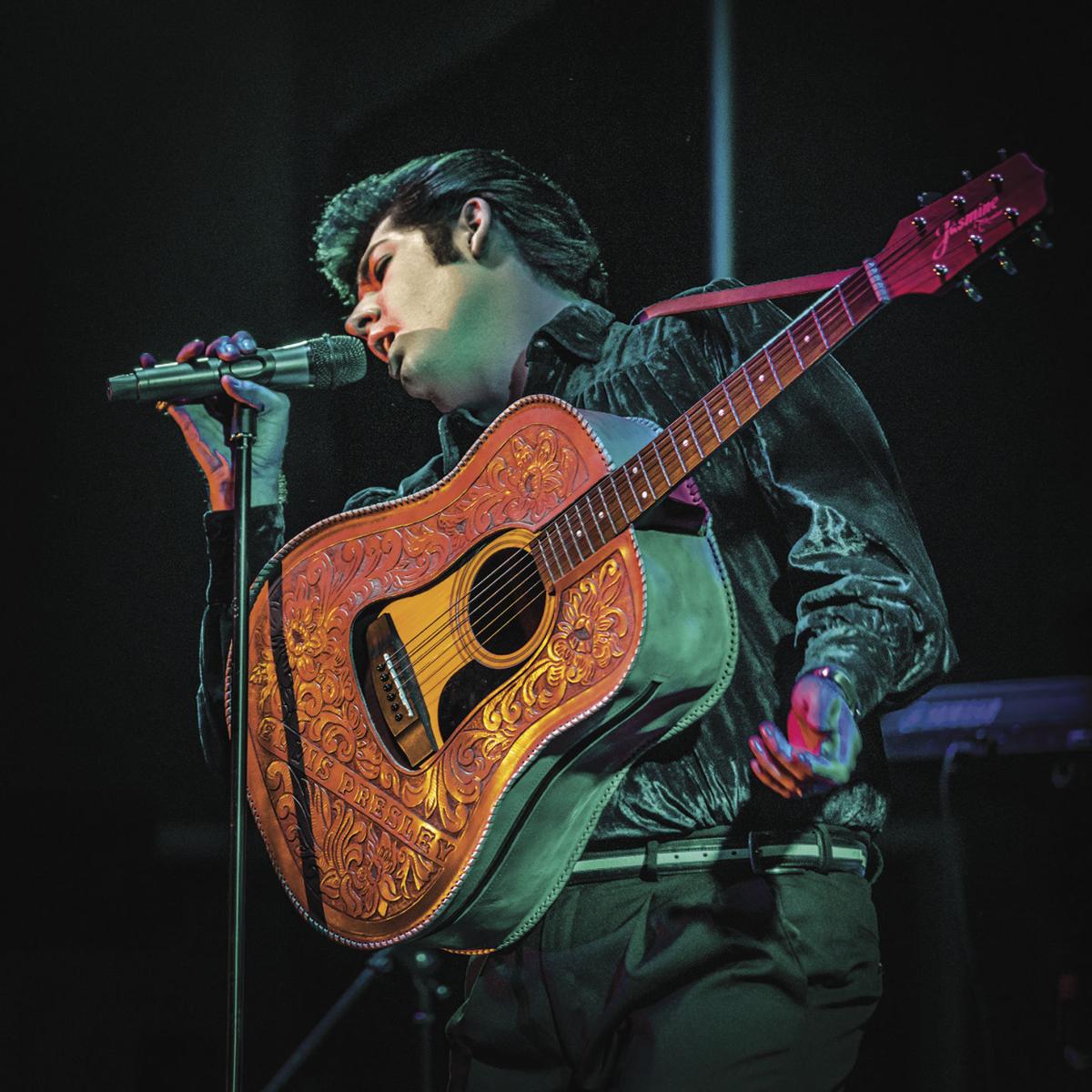 Austin Irby performs as Elvis Presley. He, along with Jacob Eder, will perform Saturday at the Abbeville Opera House. 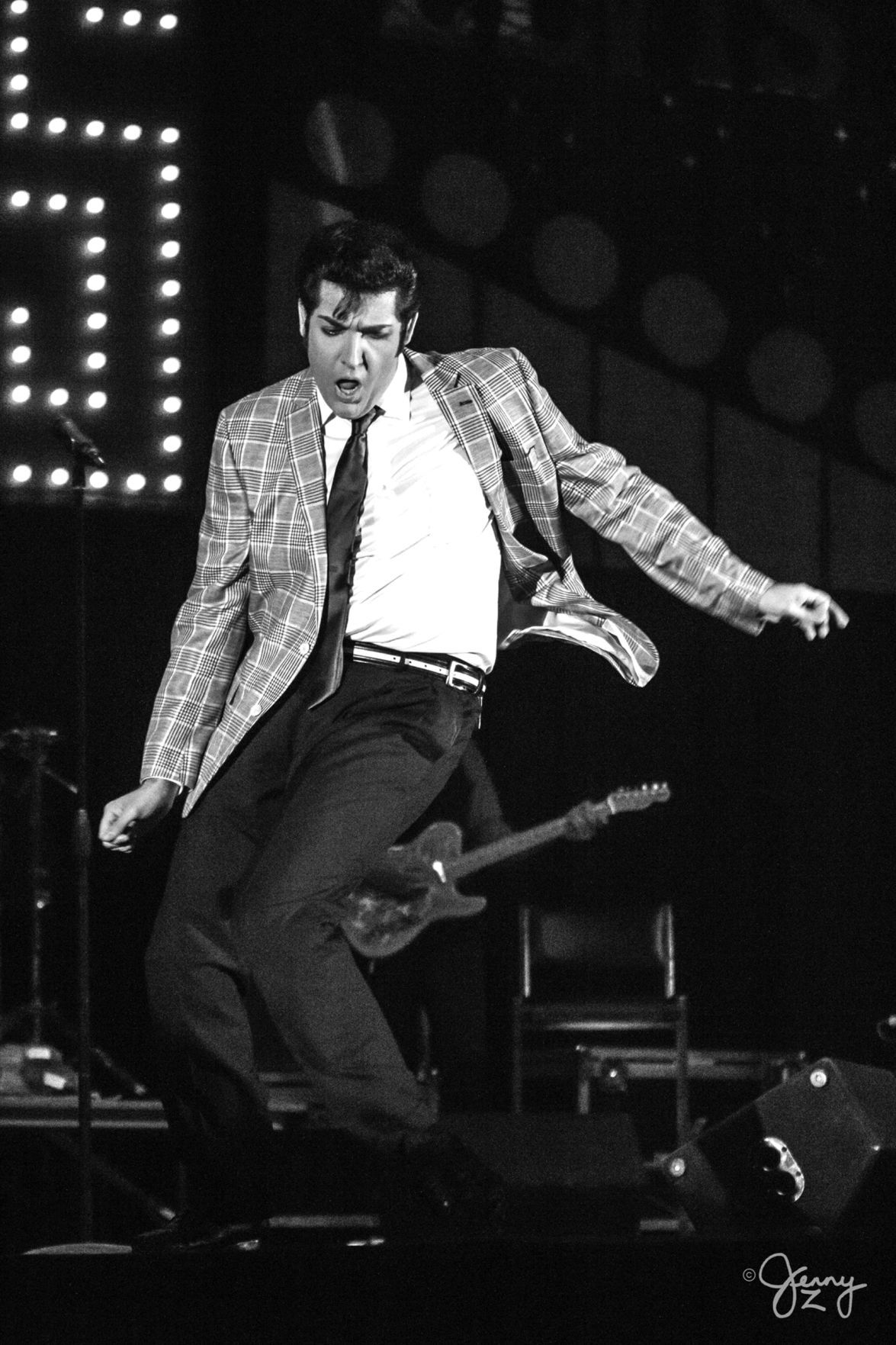 Austin Irby is an Elvis Presley tribute artist, along with a singer, actor and musician. 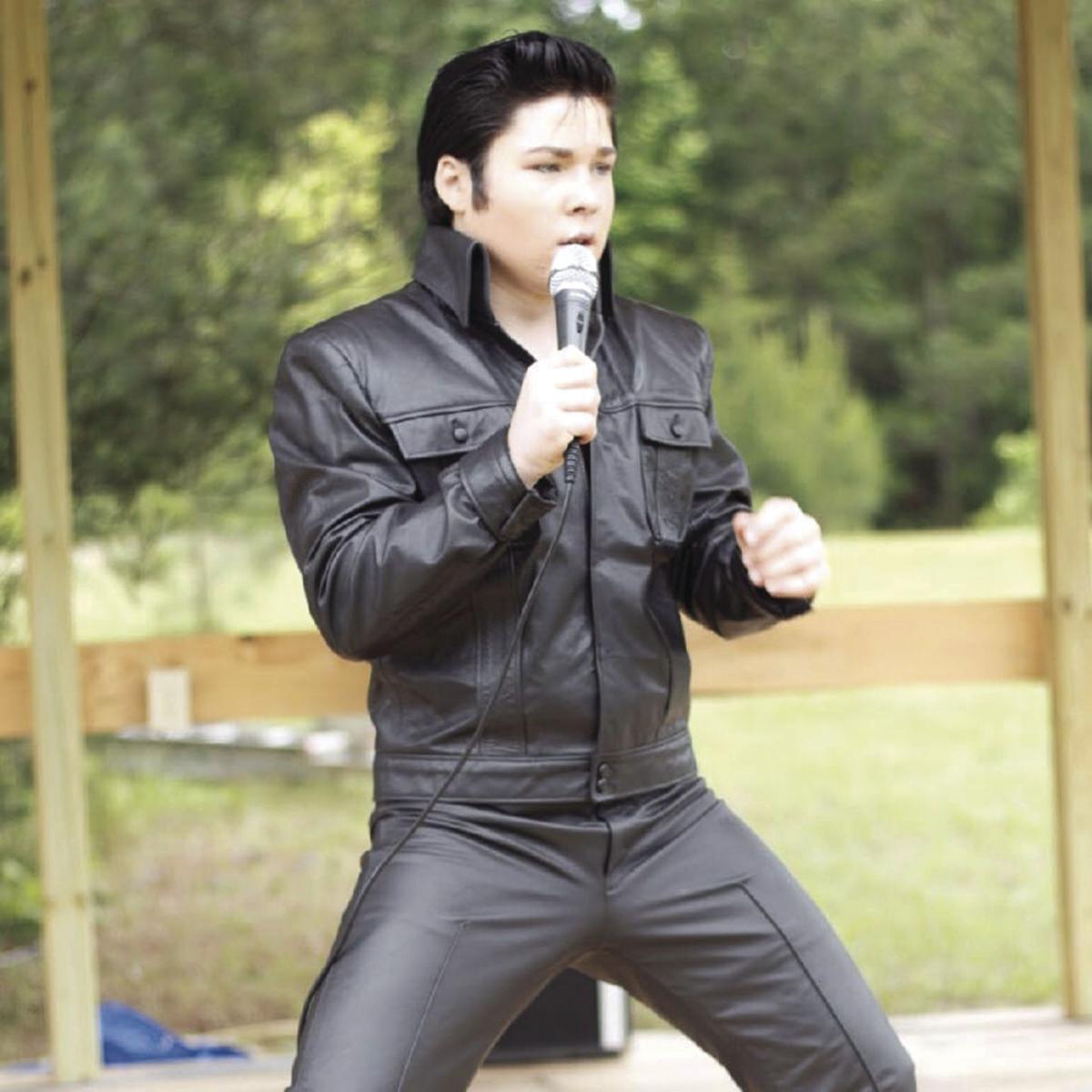 Jacob Eder rocks a replica of the black leather ensemble that Elvis Presley wore for his 1968 television special. 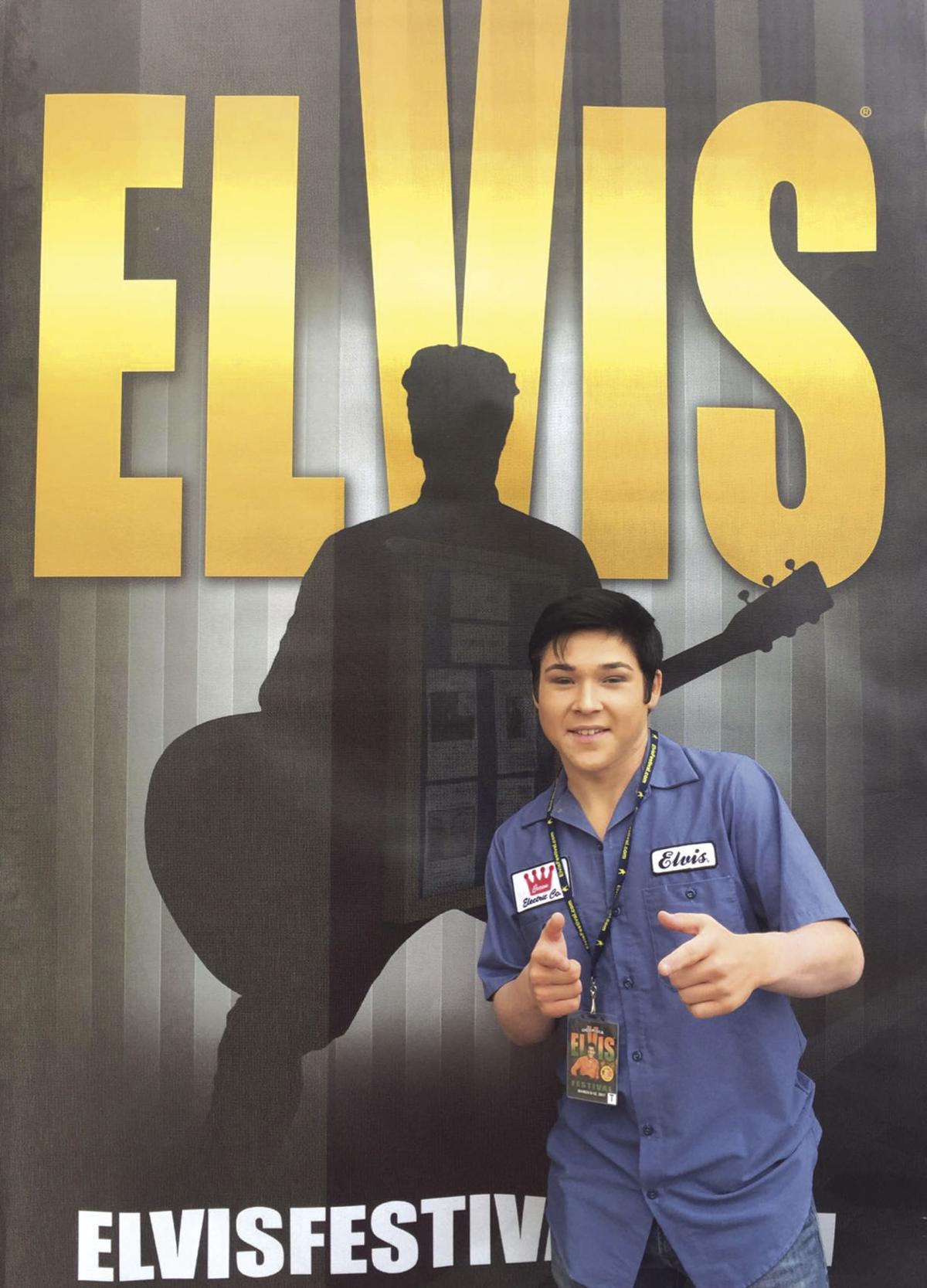 Austin Irby performs as Elvis Presley. He, along with Jacob Eder, will perform Saturday at the Abbeville Opera House.

Austin Irby is an Elvis Presley tribute artist, along with a singer, actor and musician.

Jacob Eder rocks a replica of the black leather ensemble that Elvis Presley wore for his 1968 television special.

ABBEVILLE — There’s only one Elvis, man.

Fortunately for lovers of the King of rock ’n’ roll, that’s not accurate.

A nearly year-long drought at the Abbeville Opera house will end when Abbeville’s Jacob Eder and Anderson’s Austin Irby break out gold lame jackets and jumpsuits to make memories of Elvis Presley live for one night.

The Opera House opens its doors Jan. 30, as the Elvis tribute artists present an Elvis Birthday Celebration in the Carolinas. The show was originally scheduled for Saturday but was delayed because of COVID-19 concerns. The show starts at 7:30 p.m., but a pre-show event will be held at 5 p.m. with a performance for VIP ticketholders from 5:30-6 p.m.

“I always tell (Mike Clary) that I love historic venues and I love vintage,” Irby said. “The Opera House is vintage. Being able to perform there is awesome even if it’s 20 minutes outside my door.”

Performing with Eder is “showing how hometown boys have come along over the years.”

While the show will mean memories for the audience, for Eder it might mean a job. For Irby, it’s a career.

They said the show will be the third or fourth time they have performed at the Opera House. Every single time Eder has performed there, it’s a sellout or close to one, he said. Part of the goal is interacting with the crowd, although Irby indicated that might not be feasible with COVID-19.

Both Eder and Irby learned about Elvis as children, through listening to albums owned by their parents and grandparents and watching movies and performances.

Eder said his grandparents played Elvis’ music all the time. Eventually, he started singing Elvis tunes for his family, even doing karaoke.

Word got out about him and he was offered an opportunity to sing at a local beauty pageant. In time, he went to eBay and bought a $20 jumpsuit. He said now he has a replica of a real jumpsuit. Eder’s efforts have led to a five-year hobby/job.

Irby comes by a love of music and Elvis honestly. He said his father was a big Elvis fan and turned him onto Elvis. He has his dad’s collection of Elvis records. His mother and uncle performed in gospel groups all their lives.

He plays guitar, sings his own music and has released CDs of his work.

Irby recalled watching an Elvis movie when he was 10 years old, and being amazed by his swag and moves.

His first performance was in Greenwood at the fountain in the center of uptown for a benefit. An organizer knew he was doing Elvis shows and he was asked to sing. Irby was 10 years old.

“I stood there at that time singing with my eyes closed because I was scared to death. You wouldn’t know it now. Then, it was like ‘what have I gotten myself into now.’”

Working as a tribute artist involves than closing your eyes and singing.

Eder said he studies Elvis, his charisma, his moves, his singing and mannerisms. The challenge for him is Elvis’ moves and voice.

A person has to have a full package to get into the big contests, Irby said. A performer needs to work on music, mannerisms, everything. The key is to be flawless.

The most important thing for him is vocals. Nobody will sound like Elvis, Irby said. An artist needs to critique his voice and phrasing to be as close as possible so people say that he kind of sounds like Elvis.

“I go to Elvis University 24/7. The crazy thing is, any Elvis tribute artist says, ‘You learn something new about him every day.’”

Irby has gotten more comfortable with his shows. He has performed for crowds ranging from 20-30 people to 1,000. His biggest crowd was 5,000 at a show in New York.

Both Eder and Irby have visited Graceland and compete in Elvis contests while maintaining a touring schedule that keeps them in the spotlight three to four weekends a month. Irby said he does up to 200 shows a year.

Shows have taken Eder as far as Louisiana. He even had been booked for a cruise ship last year until COVID-19 came along. Eder won the 2019 Big E Festival in Rayburn County, Georgia. He was supposed to headline the festival last year. COVID dashed that plan. Eder said he hopes to appear this year.

Work as a tribute artist has taken Irby to nearly 25 states, Ontario, Canada, and the Grand Caiman Islands.

Irby vied for a crown when he competed in the Ultimate Elvis Contest, which he said is the only contest sanctioned by Elvis Enterprises. Twenty of the best tribute arts in the world participate. In 2016, he placed in the top 10. At 18, he was the youngest performer at the contest.

It takes time to get there. “I can say I’ve accomplished something,” he said.

That expectation isn’t singular. Irby praised Eder’s efforts as a tribute artist. Irby recalled inviting Eder to a competition. He ended up placing fifth out of 40 tribute artists. Eder will definitely be there some day.

If it sounds like a fellowship exists between Elvis tribute artists, you would be right. Eder said Irby mentored him when he started performing.

Irby said he met Eder after he did some shows at an auction house. He said Eder’s mother told him that Jacob was trying to mimic his moves.

Later, Irby provided Eder one of his jumpsuits after Eder opened a show for him.

“They’re not cheap, but they’re worth the money,” Irby said.

Eder’s wardrobe consists of replicas of jumpsuits, the ‘50s gold lame jackets and a replica of the black leather ensemble Elvis wore in his TV comeback special in 1968.

“It’s a different feeling when you put on a replica of a jacket or pants that Elvis wore,” he said.

The fellowship is one of the reasons for working as a tribute artist, Eder said, adding that he has made a lot of friends and knows people who have performed all over the world.

Nobody brings anybody down at competitions, Irby said. If someone is missing socks or a belt, you loan them out.

“We cheer each other on. No one says, ‘You’re horrible.’ We give them high-fives when they come off the stage and wish them the best.”

They also offer advice. Irby recalled experiencing difficulty trying to get Elvis’ moves down. Another tribute artist advised him to practice his moves in the dark so he didn’t have to look at himself. It paid off, he said.

What the future holds

For Eder, working as a tribute artist is part job, part hobby. He is a student at Piedmont Technical College studying mechatronics, the field of robots and machinery in factories.

The 20-year-old expects to graduate this summer and has been mulling the possibility of devoting more time to performing to see how far appearing as Elvis can take him. That would involve promoting himself more and doing more traveling.

One question every tribute gets asked is obvious: What is your favorite Elvis song?

For Eder, it varies. One day it might be “Hound Dog;” other days it might be “Suspicious Minds.” He said he also likes Elvis’ work in gospel music.

The favorite song changes every week for Irby, who said it depends on his mood. For now, it’s “Moody Blue,” which was released in 1977, about six months before Presley’s death.

Performing as Elvis includes acting for Irby. In Chattanooga, he portrayed Elvis in a stage production of “Million Dollar Quartet,” a show about the time, Elvis, Johnny Cash, Jerry Lee Lewis and Carl Perkins were together.

It was completely different from performing, as he had to learn lines.

Making people happy is the goal for Eder and Irby.

“Especially with way things are, people still want to see you perform,” Irby said. “I do everything can to keep everyone safe. For 2 or 3 hours, they might have their minds clear and are not thinking about what’s going on in world.”

“If they leave with a smile, I’m happy,” Eder said. “As tribute artists, we try to give them a memory they can keep alive.”

“I can speak for all Elvis tribute artists,” he said. “We appreciate you all and thank you for supporting us.”