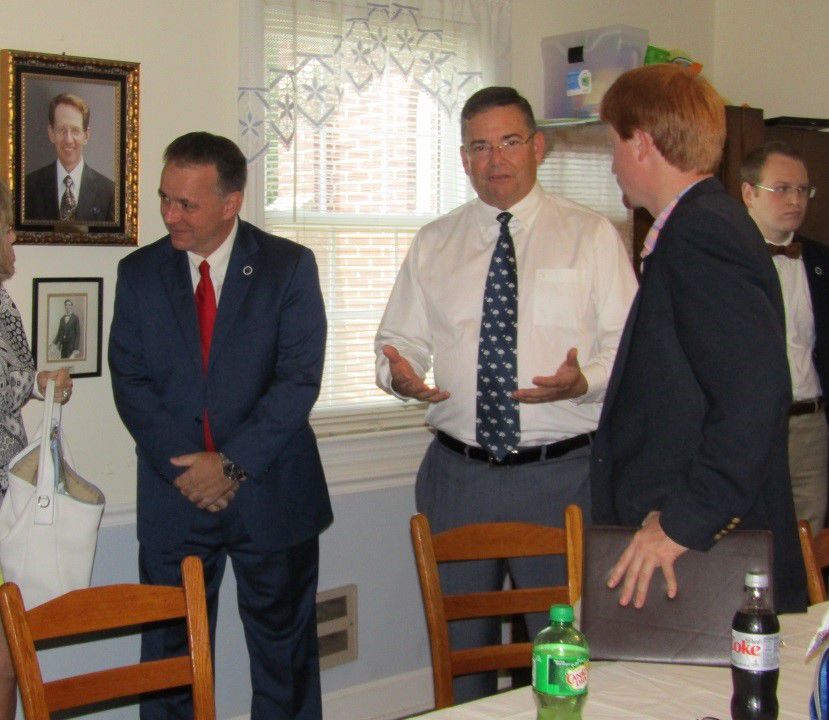 Legislators came together in August 2017 at the first meeting of the Family Caucus, which is dedicated to conservative family values. From left are GOP Reps. Rick Martin, John McCravy, Josiah Magnuson and Steven Long.

The chairman of South Carolina’s Family Caucus is refuting allegations by a House colleague that he wasn’t willing to run point on the latest attempt at defunding Planned Parenthood through a budget proviso.

State Rep. John McCravy, R-Greenwood, said he chose not to put his name on the controversial amendment as a show of solidarity with others in his caucus who support the issue.

House members spent nearly three hours on Tuesday debating a Gov. Henry McMaster-led proposal to zero out any state aid for Planned Parenthood. It carried by an 84-31 vote.

In a lengthy post to his House District 8 website, state Rep. Jonathon Hill, R-Anderson, took credit for getting the amendment introduced, though it was sponsored by Greenville Republican Ashley Trantham and Josiah Magnuson, R-Spartanburg.

“The events of the last 48 hours are an amazing story that demonstrates the power of God ‘over the affairs of men’ and validates the effectiveness we can have when we embrace the power of confrontation in politics,” Hill wrote.

Hill went on to accuse McCravy of not pushing for the amendment because he didn’t want to imperil his chances of getting a “fetal heartbeat bill” through key House committee votes.

That measure — a centerpiece of the Family Caucus’ legislative priorities — would lower the state’s abortion threshold from 20 weeks to when a heartbeat is first detected.

Hill said in his post that McCravy’s caucus “cut a deal” with House Speaker Jay Lucas over the heartbeat bill.

McCravy on Tuesday took to the House floor in defense of Trantham’s amendment, which Hill credited him for.

But the Greenwood attorney said Hill’s recounting of how the proposal came to be was peppered with inaccuracies.

“I am glad that Rep. Hill is also pro-life, but some of his antics inadvertently added to our challenges. He did read and approve the final version of the amendment, like many others,” McCravy said. “I would rather not comment on the fiction and non-fiction in his writings because I don’t want to distract from the serious matters at hand.”

Hill said he was confronted by several GOP lawmakers who were upset that he handed their personal cellphone numbers to constituents in a bid to get the amendment through.

“They weren’t very pleased at all. They said that they got calls all through the night, in the wee hours of the morning, and ended up turning their phones off. One Rep even missed a call that her daughter had gone into labor because she’d turned her phone off because of all the calls,” Hill wrote.

He also stood by his actions.

“At the end of the day, I have not one regret. This issue is too important to let slide by. Inconvenient calls from constituents are part of the job, an occupational hazard of being an elected official,” he wrote. “No matter how loud politicians squeal and denounce, confrontational politics works. It’s high time we conservatives started using these tactics to defend life, liberty, and property — and defunding Planned Parenthood is an important battle in the war to protect the humanity of the unborn.”

“The lives of all children, born and unborn, are sacred. The practice of using fetal remains from babies killed by abortion for experimentation or research is dehumanizing and unethical, and is not the type of activity we as a state want to allow,” Cash said in a press release. “This issue touches on our state values and I would hope that the Senate would join in supporting this commonsense, virtuous proposal.”

For the last two decades, spring in South Carolina has carried with it intense debates by state lawmakers about abortion funding.