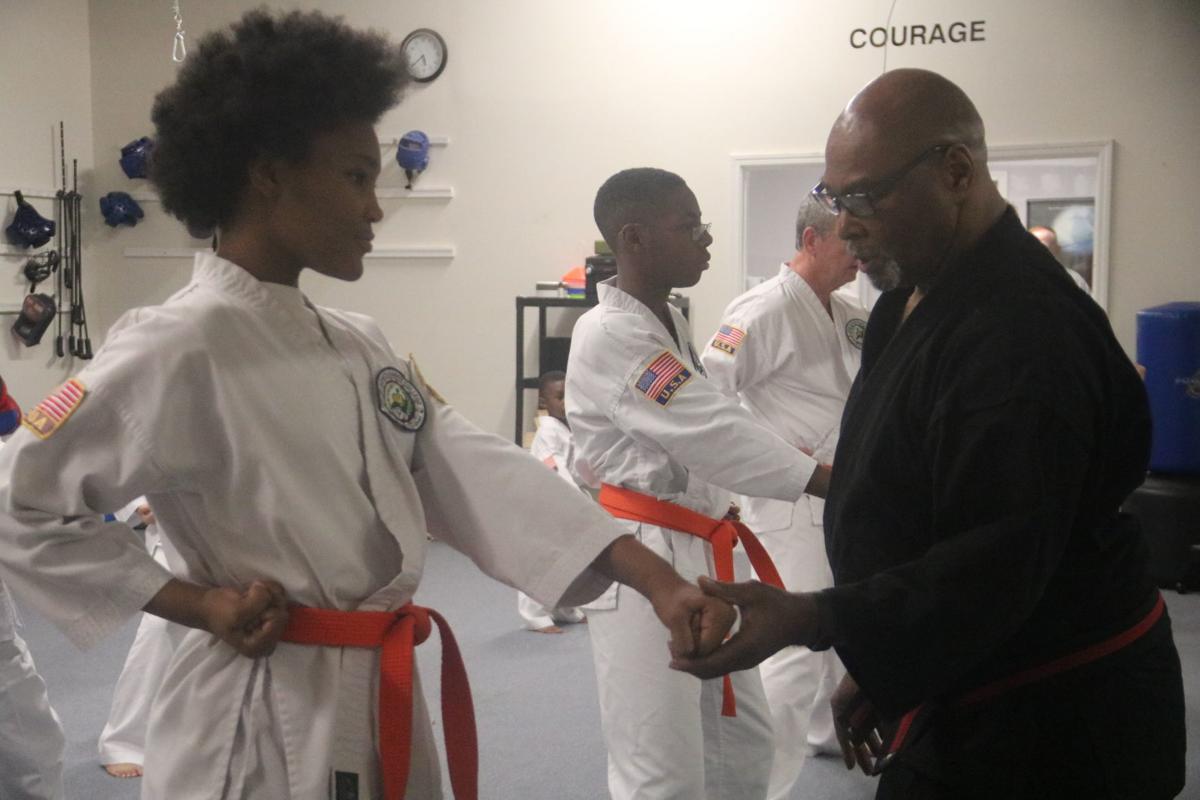 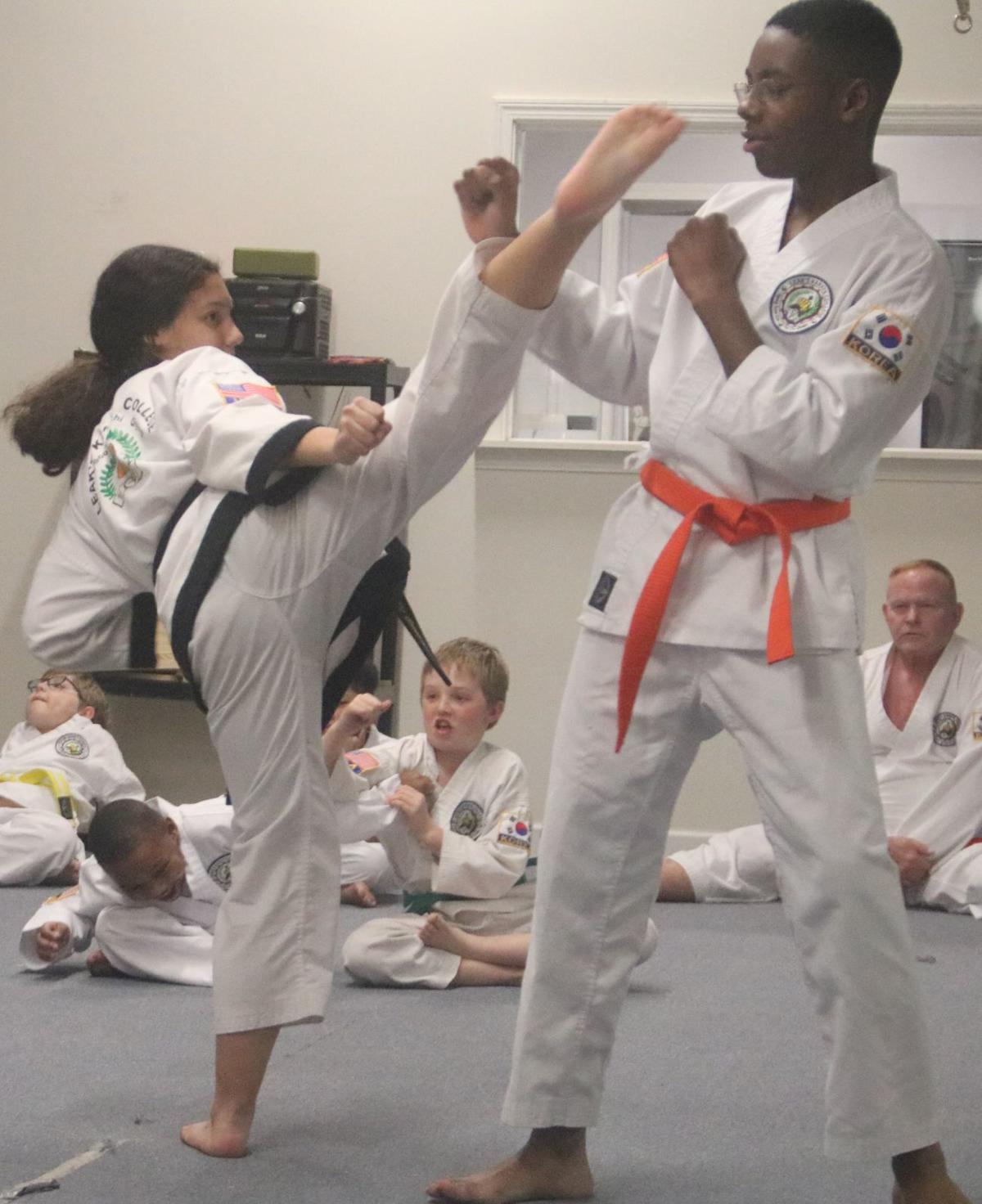 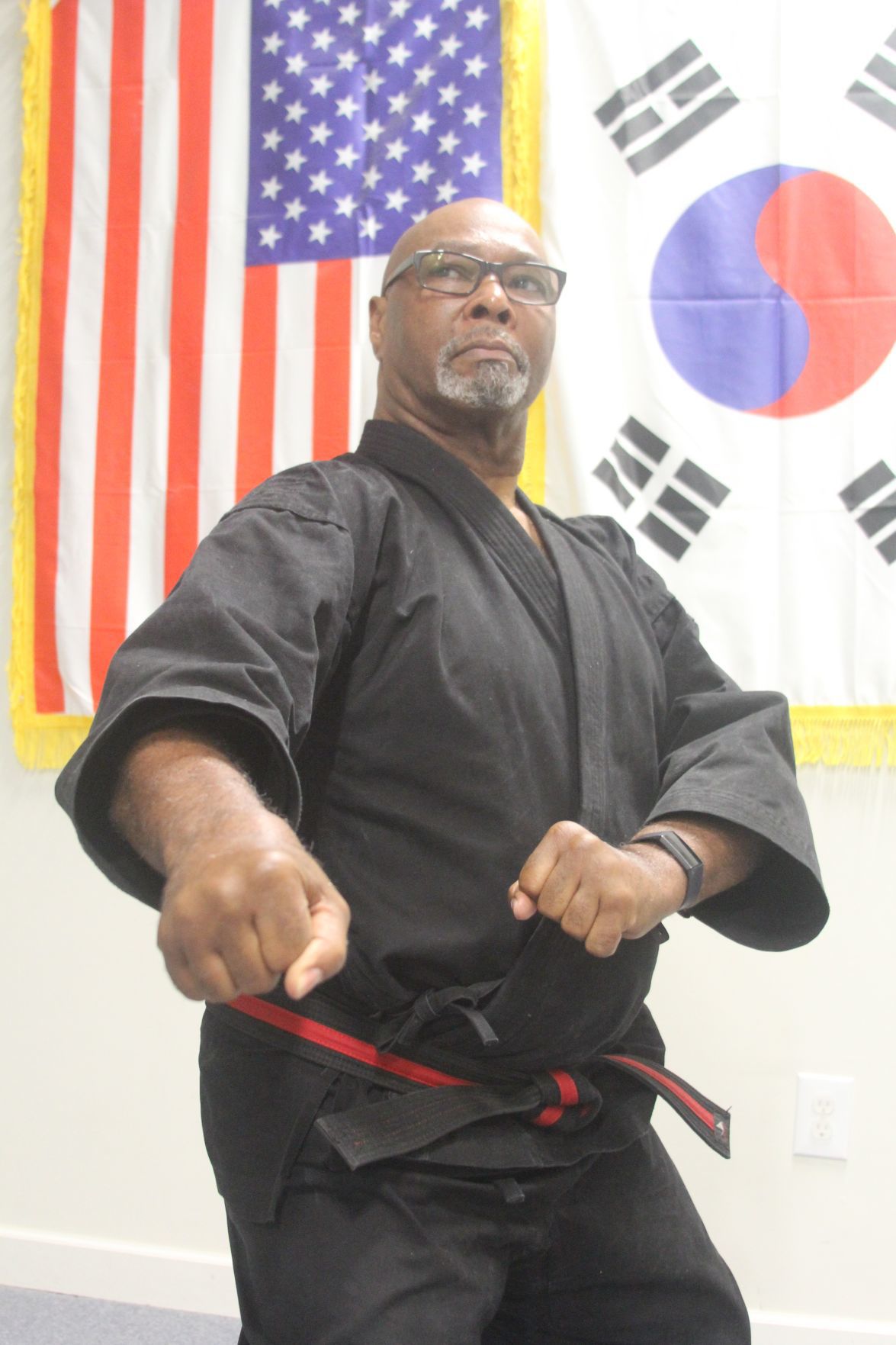 Martial arts master Darnell Leak has spent the majority of his life honing his skills and passing them on to his students at Leak’s Karate College. 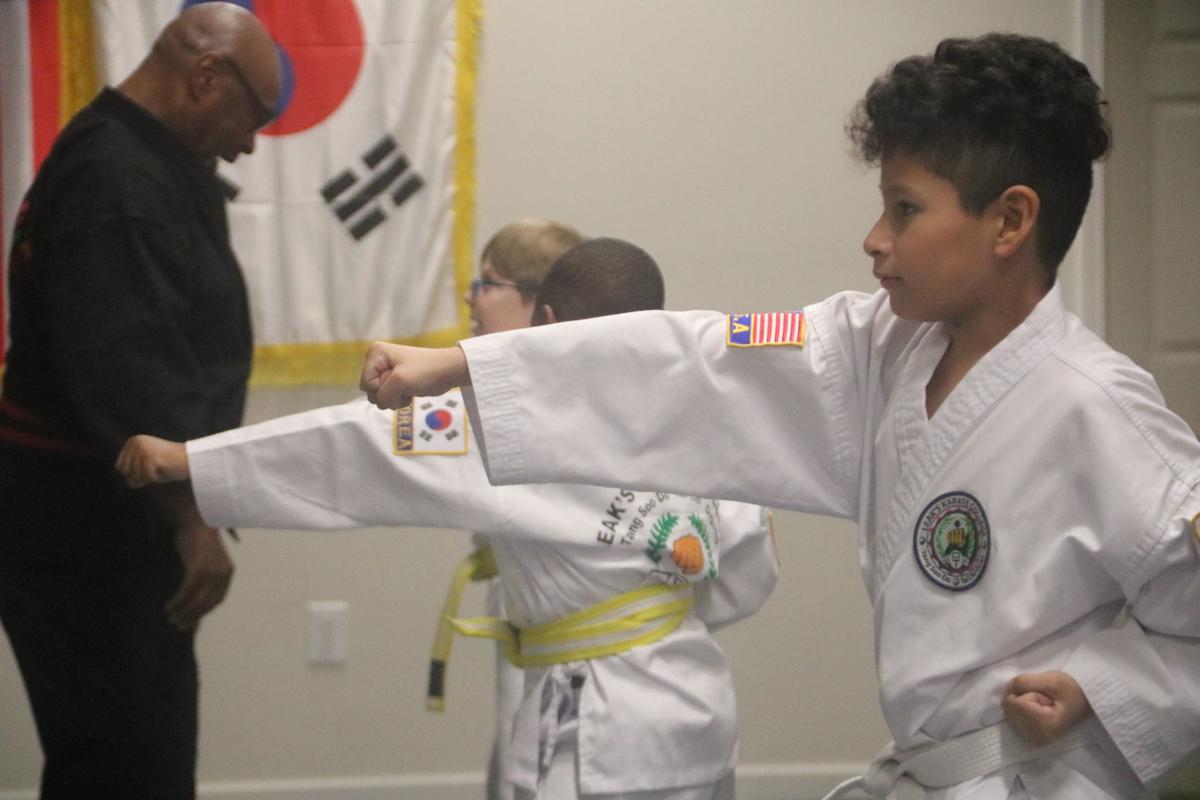 Students of all ages train and learn at Leak's Karate College, where 67-year-old Master Darnell Leak imparts his decades of martial arts experience onto his students. 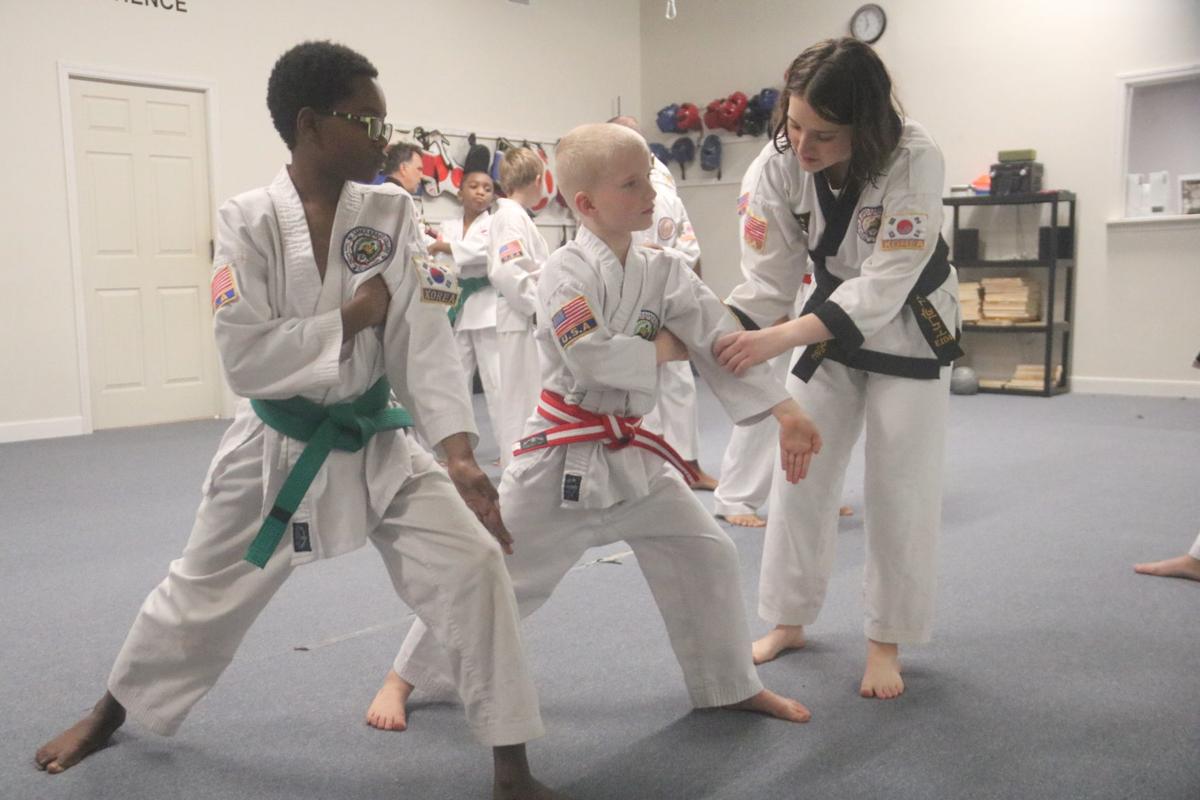 Students with more experience take the lead on guiding and helping teach the younger students at Leak's Karate College. 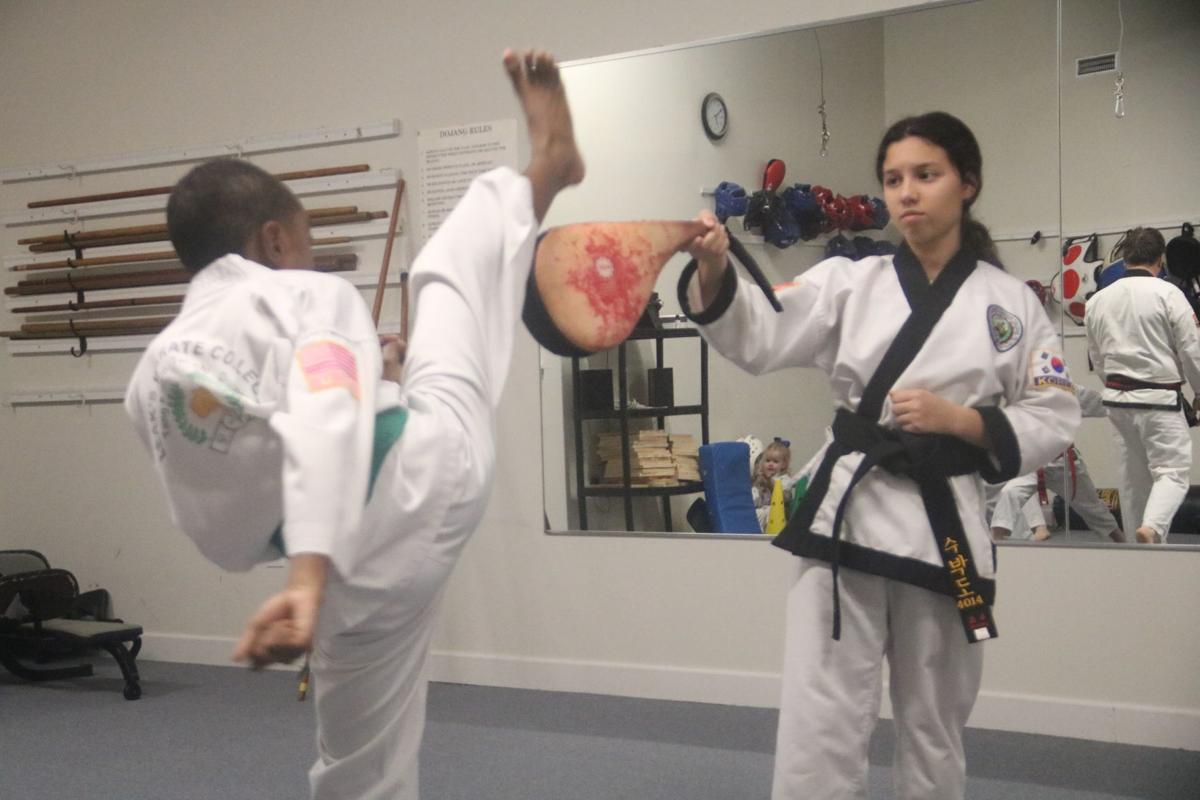 Martial arts master Darnell Leak has spent the majority of his life honing his skills and passing them on to his students at Leak’s Karate College.

Students of all ages train and learn at Leak's Karate College, where 67-year-old Master Darnell Leak imparts his decades of martial arts experience onto his students.

Students with more experience take the lead on guiding and helping teach the younger students at Leak's Karate College.

For nearly 60 years, martial arts Master Darnell Leak has been following a message he got from God — one that’s taught him a lifetime of discipline and strength.

When he was a 10-year-old boy living in Greenwood, he said he wasn’t exactly a fighter. He was a small boy and avoided conflict when he could. While walking home from school, he’d avoid certain routes that might end with him getting beat up by a classmate.

He liked to read, especially his Bible. He was sitting on his back porch one day, reading about Solomon and David, when he said he thought he heard a voice calling his name. He brushed it off, went back to reading, but soon after heard it again.

He said the voice was God, who said Leak would become a great warrior.

But in the ensuing weeks, he’d be drawn down a path he’s still walking today. After school one day he and some friends were flipping through some instructional booklets at a store, when he saw one teaching the basics of karate. He bought it and started practicing the poses he saw in the books.

“But those books just had pictures, you couldn’t see the motions and movements, so I’m just out there making poses and messing around, play fighting with my cousins,” he said. “Eventually something inspired me back then to go in the Y.”

The YMCA was still segregated at the time, so as an African American, Leak would go in through a side door, sneaking down to an area he wasn’t supposed to be in to watch through a window at a karate class. When he heard footsteps coming toward his hiding spot, he’d dart away — he was hard to catch, but not impossible.

Eventually, someone spotted him and asked what he was doing there. When he explained that he was watching the karate class so he could learn about the martial art, he was invited to join the class.

It was a lot harder than it looked from the window.

“At first, I was stiff,” he said. “Everyone was doing splits, and all I could do was stand with my legs out, like an A-frame.”

During meditation sessions, he was restless and unfocused at first. His legs would fall asleep while sitting on the floor, and when the strict instructor would tell the class to stand, Leak’s numb legs gave out on him. The instructor told the classmates not to help Leak up — he had to learn discipline the hard way.

No matter how hard things got or how much he wanted to quit, some part of Leak demanded he go back. He went every chance he could, sticking with the classes through high school.

When he graduated, he decided he had to pursue greater training. He wanted to study overseas, especially in Okinawa, Japan, and this desire led him to join the U.S. Marines.

Throughout boot camp, his drill instructors would have him spar against other trainees, and he continued practicing karate throughout his stay in California’s Camp Pendleton. In Los Angeles, he’d run into celebrity fighters such as kickboxing world champion Howard Jackson, whose school he’d end up joining. These expert fighters made quick work of Leak in duels, despite Leak’s impressive and growing skills.

“I was trying to be too fancy, too flashy,” he said. “I asked Howard how he could beat me so easily — you’re just doing simple stuff.”

He learned about the importance of simplicity in California — that mastery comes from being able to do basic moves with pinpoint accuracy and breakneck speed. Soon though, his deployment would land him in Okinawa, and he’d have the chance to learn under an internationally known master.

“In America, all the people in karate were about punching and kicking, but there’s more to karate than that,” he said. “I wanted that spiritual part of it.”

He began learning under Eizo Shimabukuro, the founder of a regional style of karate local to Okinawa. Whenever Leak could get the chance, he would spend as much time with his master as possible. Shimabukuro was a carpenter by trade, and Leak would help him around his workshop before classes.

One day Leak asked his master, a Buddhist, to teach him about Buddha. He wanted to know what fueled Shimabukuro’s spirit, what made the master tick.

“He looked at me and he asked me ‘Can you beat God?’” Leak said. “I thought to myself is he crazy, of course, you can’t beat God — but I didn’t say any of that to him, you have to be respectful of your master.”

“He made me see the life of it,” Leak said. “It’s not just the scripture. Spiritual strength, mental strength and the physical, all of it has to come together. Martial arts isn’t something you just take Monday, Tuesday, Wednesday; it’s a lifestyle. It’s your whole life.”

From student to masterLeak returned to his hometown in 1974 and has been teaching martial arts ever since. For the past few years, he’s been housed at the corner of Cokesbury Street and Durst Avenue East, quietly passing on his hard-earned knowledge.

Greenwood County Councilwoman Melissa Spencer knew about Leak from her own childhood. She was familiar with his classes, but hadn’t given them much thought until recently she began learning tai chi from him.

“It gave me the chance to not only learn tai chi, but also what kind of man he is,” she said. “He teaches people of all ages, and he makes it so accessible. He’s not just building physical awareness, but a spiritual awareness too.”

She said Leak is a gentle giant who cares deeply for everyone he meets and always walks with a spirit of humility. That’s part of what inspired her on Jan. 7 to honor him with a proclamation from county council, recognizing his personal accomplishments and all he’s done for the community.

His classes go beyond teaching physical strength and speed.

“Not only does it teach me good discipline,” 14-year-old Que said, “but it helps me control my anger, too.”

Students with more experience can even take leadership roles in the class, guiding others and helping them hone their form. Samantha Greenman, 13, has been studying karate for nine years. She said she finds a lot of joy in Leak’s classes and enjoys working with the younger students.

“I really love studying the art form,” 17-year-old Rebekah Logan said. “It feels like it has an actual purpose, too.”

On Tuesday, Trakius Christian was practicing with Leak himself while others worked on their forms. Christian, 33, has been coming to Leak’s classes since he was 5 years old.

He said practicing martial arts is one of the most beneficial things he’s done in his life, and it has helped him stay on track in so many facets of his life.

“It kind of just prepares you for the world, for dealing with difficult things and choices,” he said. “I look at it now as an exercise of faith. You may not be ready to achieve something, but you work at it. ... I guess it teaches you that the only limitations you have are the ones you set for yourself.”

Karate is for everyone, Christian said, and Leak echoed that sentiment.

“Everybody is a martial artist,” he said. “When you get up in the morning and you say ‘I don’t want to get up out of bed, but I have things to do, so I’ll get up’ — you just fought a battle, and won.”

Alonso returns to McLaren for another shot at Indy 500