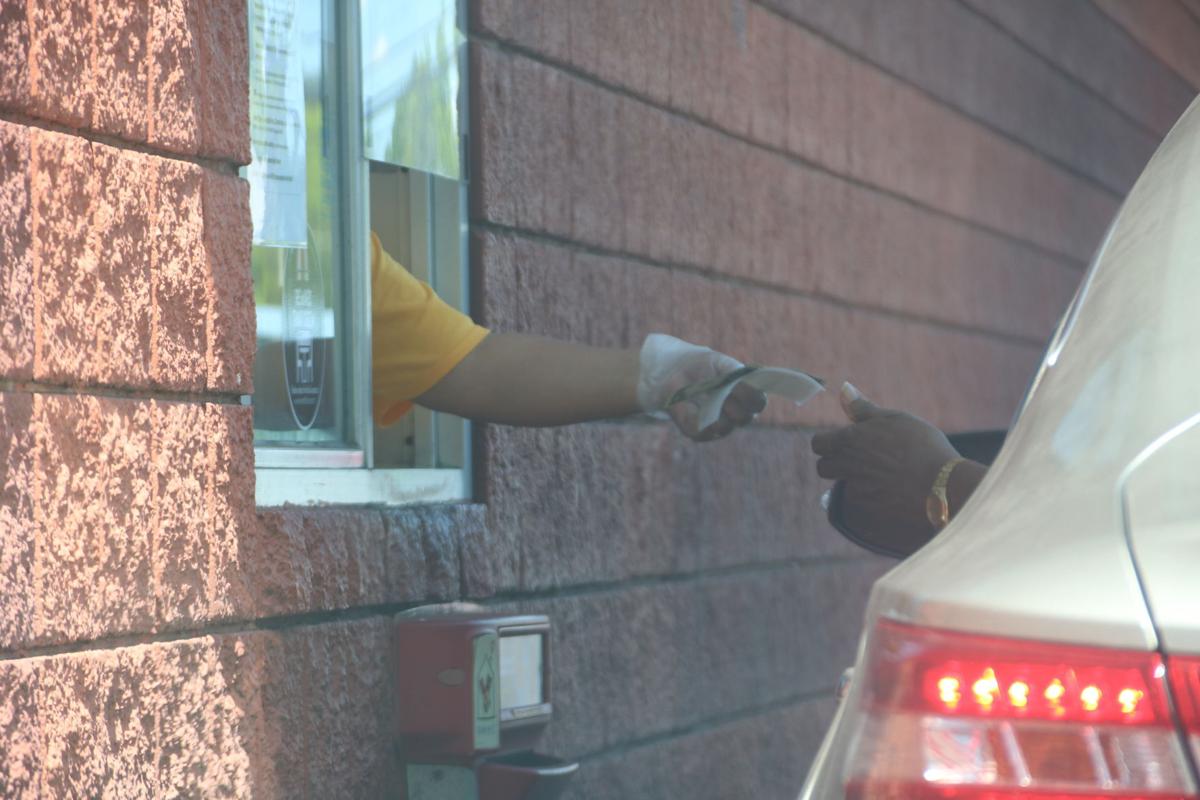 Restaurant employees were considered essential throughout the COVID-19 pandemic, putting them at risk of exposure to the coronavirus while economic downturn led to layoffs at many restaurants. 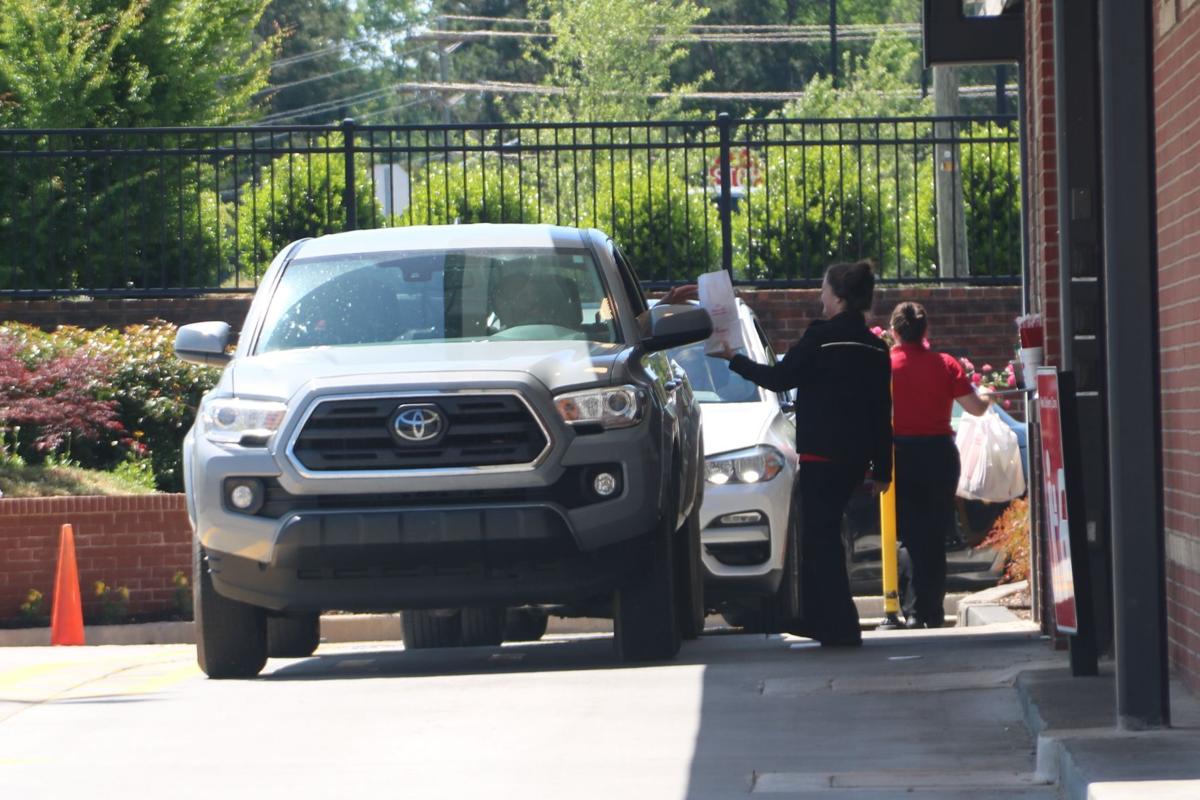 Workforce officials said if restaurants are struggling to hire staff, they need to offer people a better deal than what they can get from unemployment benefits. TOP: ‘Now hiring’ signs are posted at many of Greenwood’s fast food restaurants, reflective of a national struggle to fill often low-paying food service industry jobs. 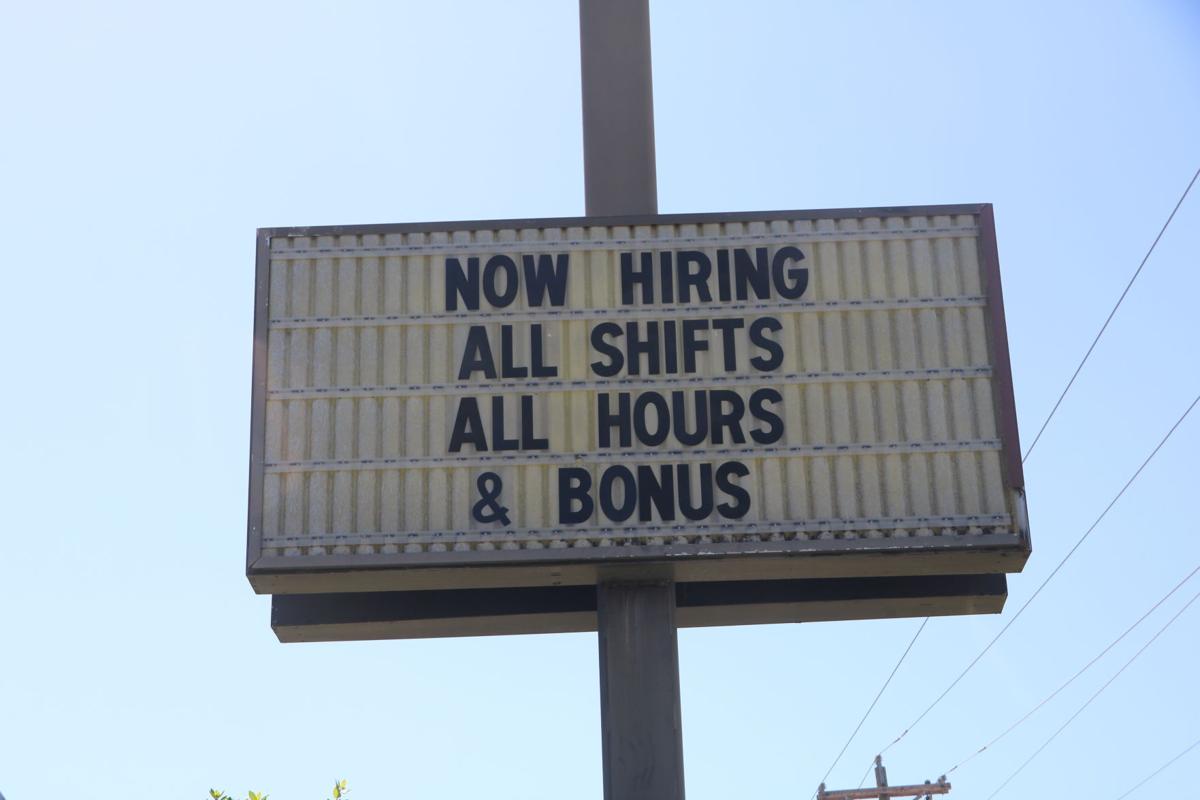 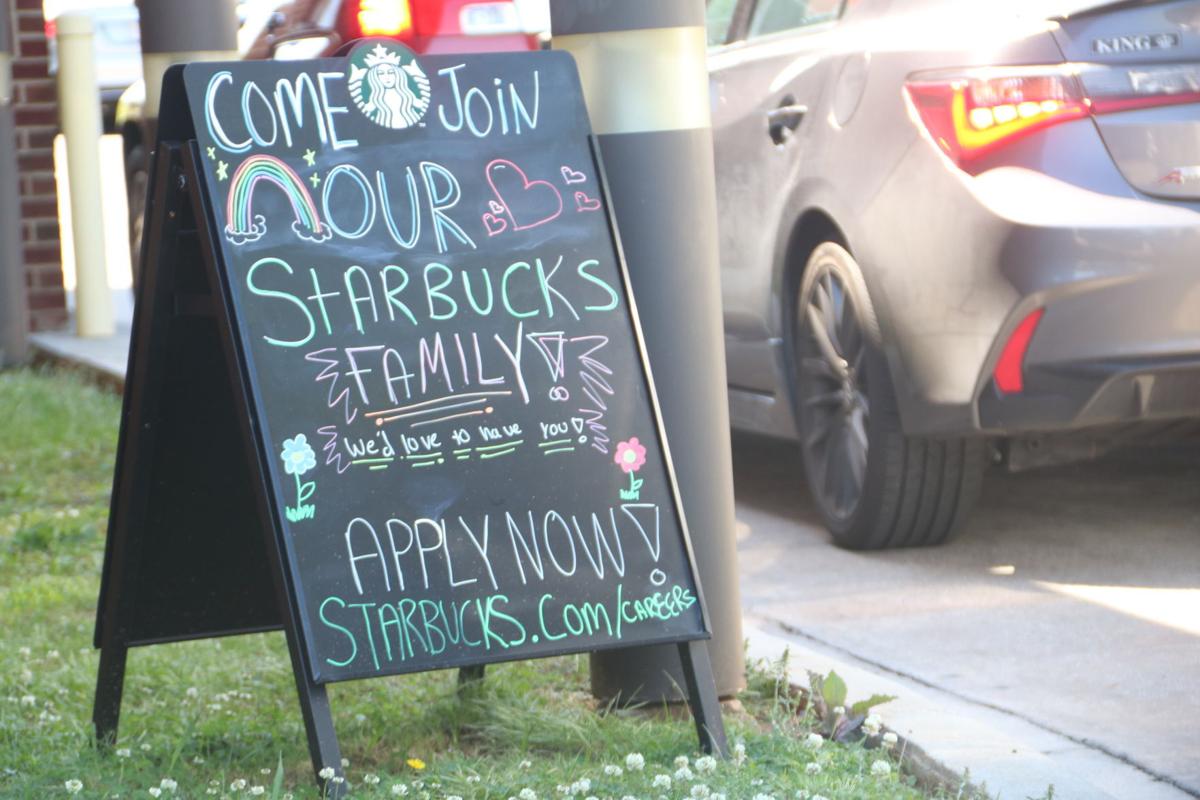 Restaurants everywhere are trying to find ways to entice people to apply to work there, following mass job loss from pandemic-related shutdowns and cutbacks.

Restaurant employees were considered essential throughout the COVID-19 pandemic, putting them at risk of exposure to the coronavirus while economic downturn led to layoffs at many restaurants.

Workforce officials said if restaurants are struggling to hire staff, they need to offer people a better deal than what they can get from unemployment benefits. TOP: ‘Now hiring’ signs are posted at many of Greenwood’s fast food restaurants, reflective of a national struggle to fill often low-paying food service industry jobs.

Restaurants everywhere are trying to find ways to entice people to apply to work there, following mass job loss from pandemic-related shutdowns and cutbacks.

The block letters hanging above nearly every fast food restaurant are a sign of a possible labor shortage, but there are clashing opinions about how to fill these vacant jobs.

“We’re having the same problem everyone else is,” said Joe Brumit, CEO and chairman of Brumit Restaurant Group, which owns the Arby’s in Greenwood and more than 60 restaurants throughout the Carolinas. “We could hire more than 300 people today.”

In July, 31.3 million people reported they were unable to work at some point in the past four weeks because their employers closed or lost business during the ongoing coronavirus pandemic, according to the U.S. Bureau of Labor Statistics. Part-time workers were about twice as likely to be unable to work as full-time workers, and nearly a quarter of food service workers found themselves unable to work.

Despite being broadly counted among essential workers, food service employees in South Carolina didn’t have broad access to the COVID-19 vaccines until March, when the state Department of Health and Environmental Control opened access to everyone age 16 and older. The CDC recognized restaurants as among the places with high risk of exposure to COVID-19.

“There’s still some people that are a little hesitant to work yet,” Brumit said.

He doesn’t think it’s the pay. Instead, Brumit cited unemployment benefits and government assistance programs keeping people at home rather than in the workforce. He said he’d like to see state legislatures cut back on these assistance programs and push would-be workers back into the labor market.

Brumit cut Sunday shifts entirely, closing the Greenwood Arby’s one day a week to offer respite to a staff spread too thin.

“We’ve got so many management positions open, we can get people into those quickly,” he said. “We’ve got to give our people some rest. We have got to take some pressure off these folks so they can rest. We don’t want to burn them out, we want them to stay.”

Gov. Henry McMaster agreed and signed an order that effective June 30 the state would no longer participate in federal, pandemic-related unemployment benefit programs. He said initial unemployment insurance claims were dropping, and that reemployment was the best path forward for South Carolina’s economy.

Greenwood’s Workforce Development Task Force, spearheaded by the local Chamber of Commerce and headed by The Links at Stony Point owner James Medford, is working to get workers into these jobs.

“We feel like we have the workforce right here in Greenwood to fill those jobs,” chamber President and CEO Barbara Ann Heegan said. “This is an immediate need, it’s a crisis.”

To fill these gaps, Heegan said the chamber is organizing a job fair from 9 a.m. to noon May 22, at the Family Event Center at Piedmont Technical College. Medford said he hopes to have 50 or 60 restaurants involved in the job fair and to bus in students from area high schools and colleges.

Heegan said her first job was in food service, and these jobs can open up the door for other employment opportunities.

“How many times do you hear from people that this was their first job, but it connected them with another employer,” she asked. “These jobs teach teamwork, work ethic and customer service skills.”

As for how to get people to apply for these open jobs, Medford said restaurant owners should quit pointing to unemployment benefits as the largest barrier.

“We need to think differently about how we’re compensating our service industry staff,” he said. “Any successful business has to recognize the competitive nature of the business they’re in, and they’re going to have to compete.”

He said his challenge to restaurants is to get them thinking about better ways of doing business that involves fairly compensating employees.

“Are we not better off paying a couple more dollars an hour and really taking stock of what our gratuity is,” he asked.

A lot of attention is focused on service industry job openings, but state workforce officials say that’s because they’re a highly visible industry. Industries that offer higher salaries don’t have to spend as much time advertising open positions, said Brian Nottingham, director of labor market information for the state Department of Employment and Workforce.

“This is no secret, anybody who has a computer and access to data can tell you, retail and food service jobs are on the low end of the pay spectrum,” he said.

People leaving the typically lower-paying jobs of the service industry look for work in top industries, which Nottingham said are now health care, social assistance and manufacturing. A rush of demand for service industry workers is common every spring, pandemic or not. Despite the stress shortages might put on employers, Nottingham said South Carolina’s economy is primed to explode.

“It’s very promising at the high level, though it’s very frustrating, I understand, for employers,” he said.

This month, more open jobs were posted in South Carolina than at any point since June 2014, he said. These aren’t just jobs left vacant because of pandemic-related cutbacks, Nottingham said it represents an actual growth in available jobs overall.

More than 82,000 jobs are listed on the state’s largest job database, SC Works Online, available at jobs.scworks.org. DEW Public Information Director Heather Biance said those 82,000 jobs aren’t all the jobs available, either. Plenty of workplaces put up signs in windows, on marquees and advertise in newspapers, and don’t necessarily list their open positions online.

SC Works, which has a Greenwood office at 927 E. Cambridge Ave., has staff members who worked to connect people with jobs throughout the pandemic. The group organized more than 400 job fairs across the state since May 2020, and in their work centers, employees provide free services such as resume writing, training workshops and mock interviews.

“We were figuring out how to continue to connect employers and job seekers together,” she said. “There are resources available for people who maybe feel very overwhelmed by that process, or people who are re-entering the workforce or maybe going into the workforce for the first time. Sometimes, the hardest part is asking for help.”

De Bruyne, Hazard to start against Finland at Euro 2020

Obamacare has survived over 2,000 attempts to kill it

Ted Cruz: Critical race theory is as racist as Klansmen