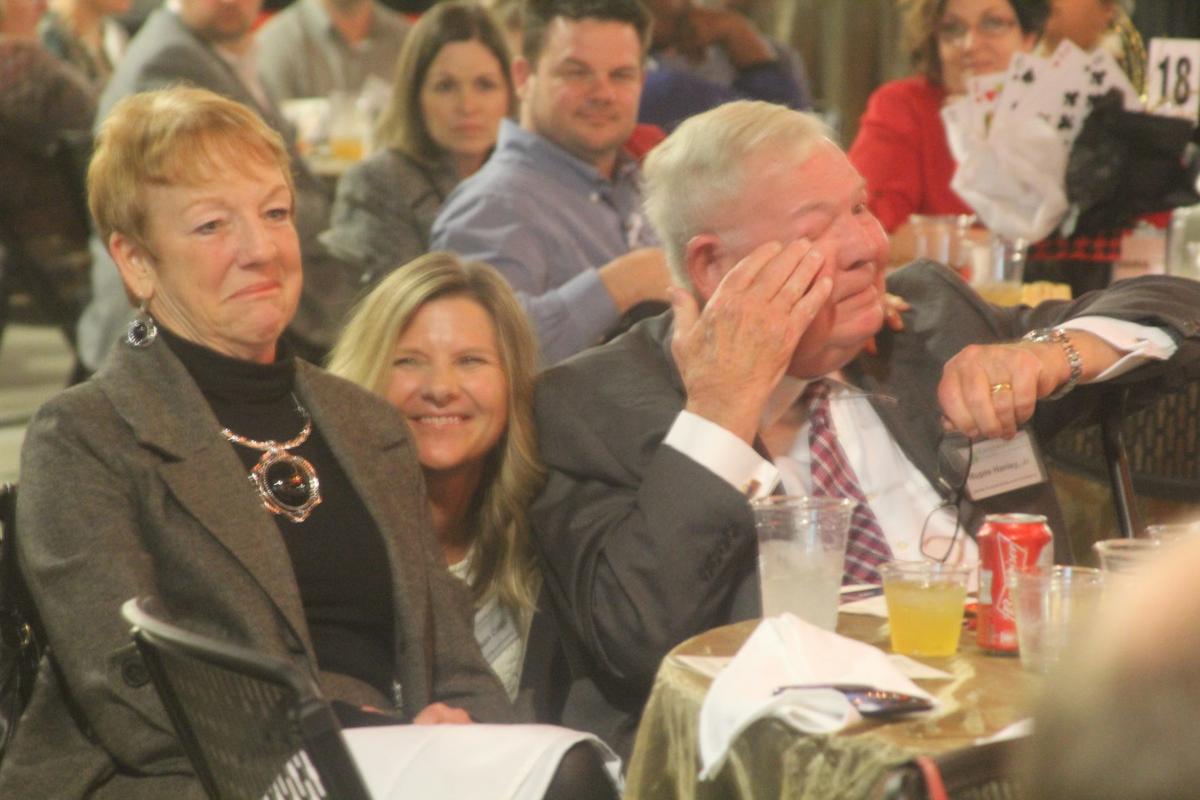 Ruple Harley Jr., right, sat beside his wife, Karen, on Thursday evening when he was surprised by the announcement that he was the 55th inductee into the Greenwood County Hall of Fame. 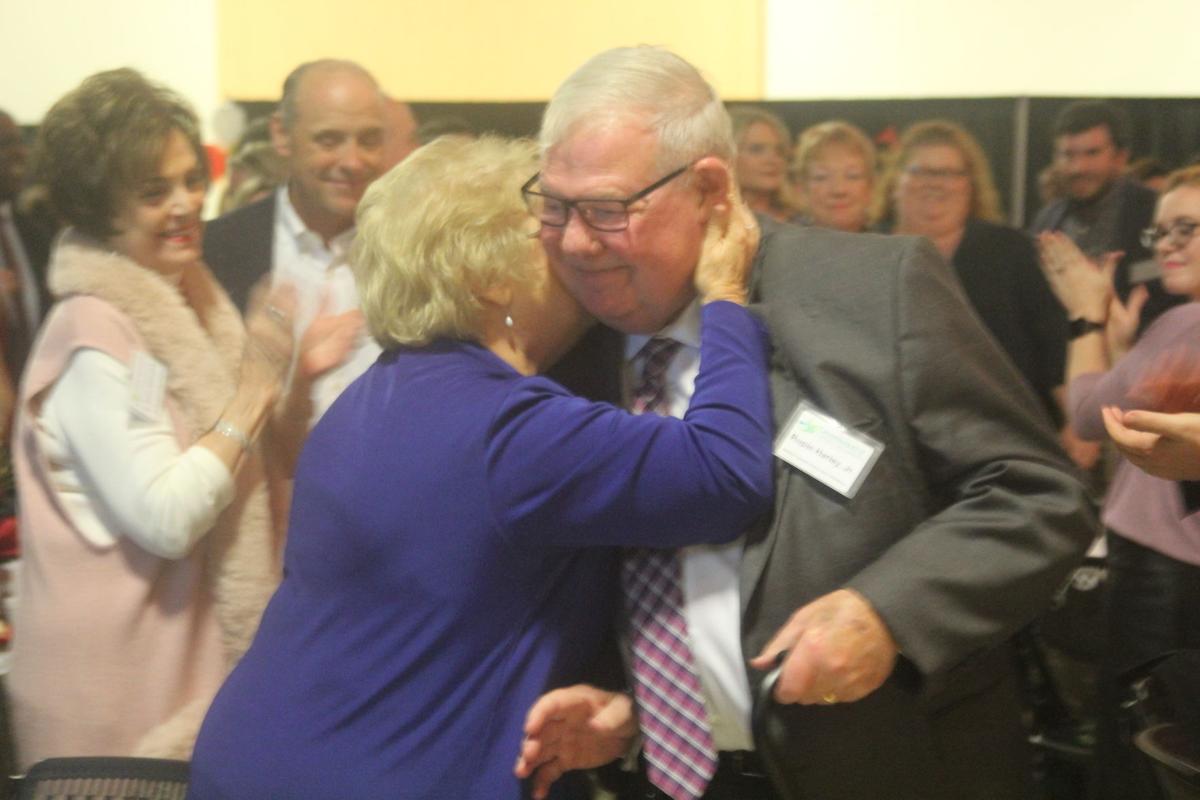 Family and friends stopped to hug and congratulate Ruple Harley Jr. on Thursday, when he was inducted into the Greenwood County Hall of Fame. 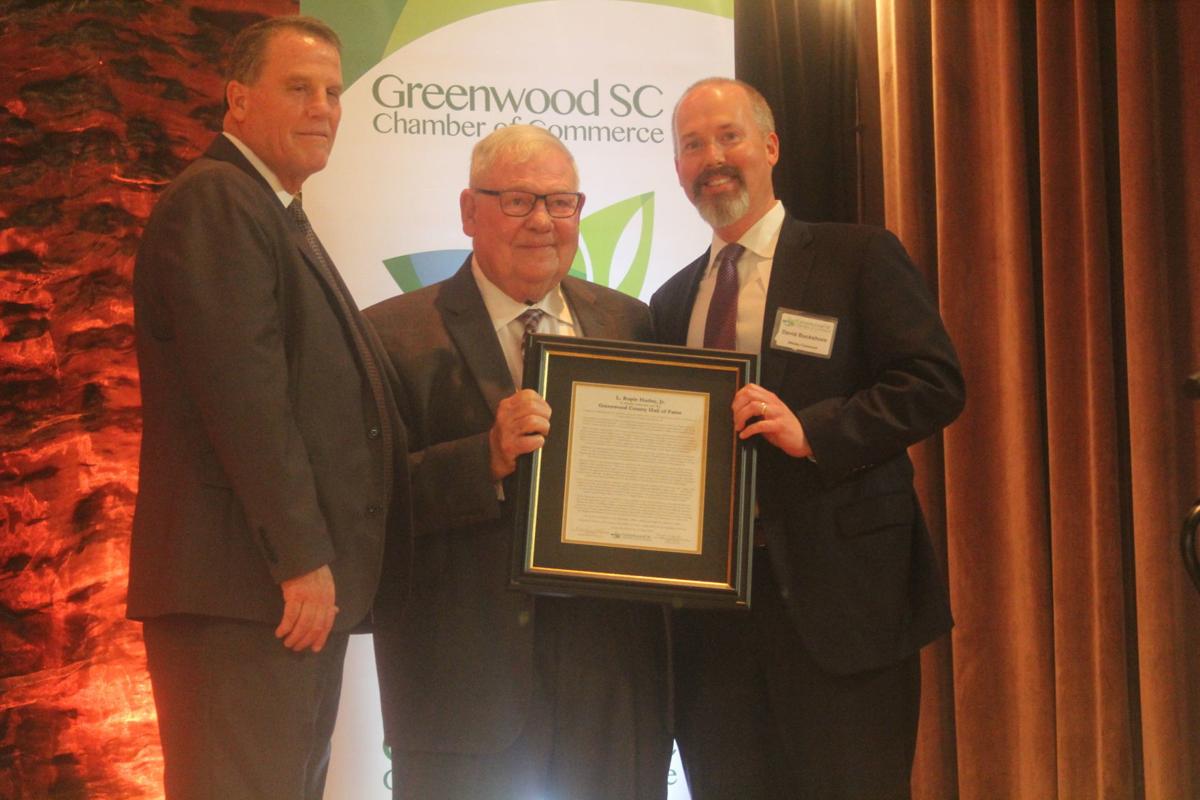 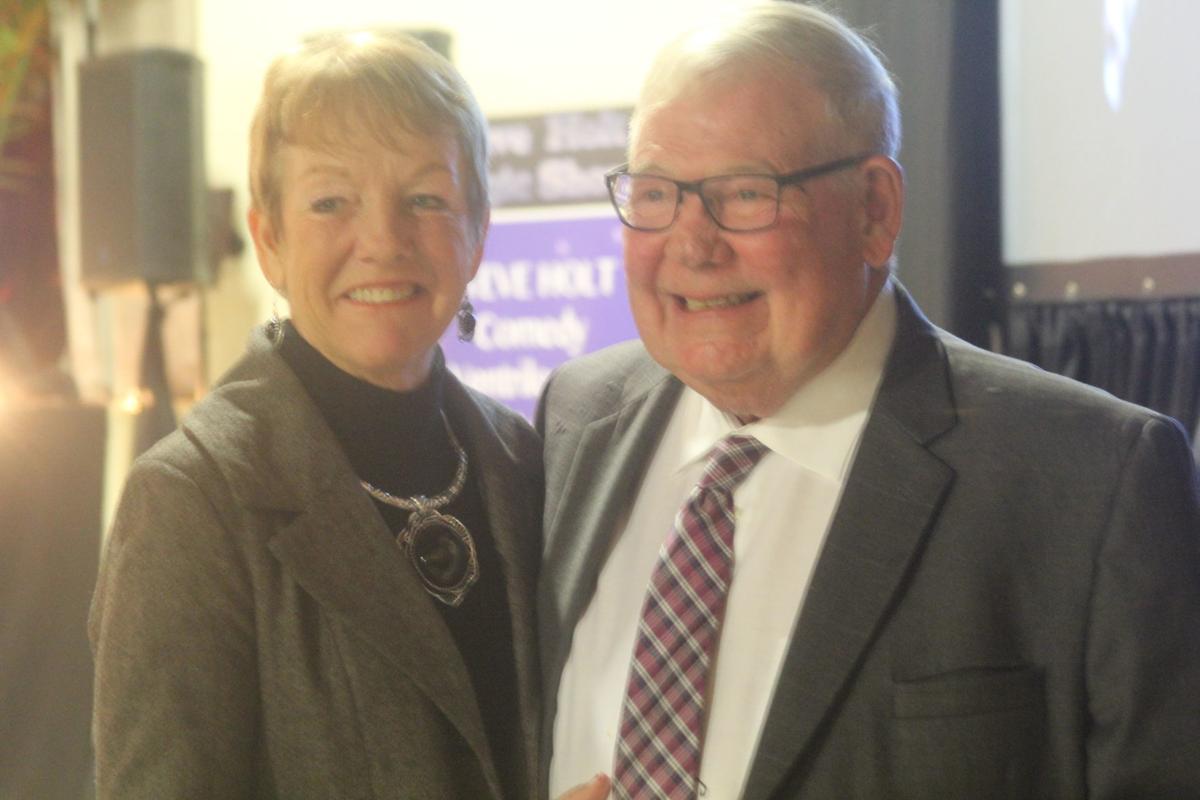 Kate and Ruple Harley posed for pictures Thursday after Ruple was honored as the 55th inductee into the Greenwood County Hall of Fame.

Ruple Harley Jr., right, sat beside his wife, Karen, on Thursday evening when he was surprised by the announcement that he was the 55th inductee into the Greenwood County Hall of Fame.

Family and friends stopped to hug and congratulate Ruple Harley Jr. on Thursday, when he was inducted into the Greenwood County Hall of Fame.

Kate and Ruple Harley posed for pictures Thursday after Ruple was honored as the 55th inductee into the Greenwood County Hall of Fame.

The trick worked — Ruple Harley Jr. was caught off guard Thursday evening when, while surrounded by hundreds of his admirers throughout Greenwood, he was told he was the 55th entrant into the Greenwood County Hall of Fame.

He had been told he was at the Greenwood County Chamber of Commerce annual meeting to accept a different award, one related to his persistence as one of the S.C. Festival of Flowers’ greatest advocates and volunteers. While that’s a large part of why he received the honor, his life in Greenwood is marked by service and dedication to improving his community.

He had tears in his eyes when he heard he was the night’s honoree, and after accepting his award had the chance to hug and kiss a line of his family members who gathered to share the moment with him.

“Growing up in Greenwood, I had many mentors,” Harley said, “and so many of them are in the hall of fame. I truly never thought I would be in that group.”

Born in Orangeburg in 1944, Harley’s family moved to Greenwood two years later, where his father bought the Ellis Funeral Home. Since then, the Harley Funeral Home has served Greenwood for more than 70 years.

Maybe it’s those long decades of serving families through their darkest hours that instilled in Harley a fundamental love for Greenwood and its people. He’s never been content to simply serve as a family business owner, although he does plenty of good by offering funeral and cremation services to families without the means to afford them.

“If you know Ruple, you know he loves Greenwood,” Nancy Corley said in a video that played at Thursday night’s ceremony. “For so many decades, he has been there to help so many families when they’ve lost a friend or loved one.”

Doggett Whitaker, of Newberry’s Whitaker Funeral Home, said Harley is a dear friend of his. Whitaker said Ruple’s soft-spoken manner and slow, deliberate movements might make him seem like a turtle at times, but it’s that demeanor that made him such an effective leader in his profession at the state and national levels. He served as president of the South Carolina and national Funeral Directors Associations.

“He was the perfect president for that time,” Whitaker said. “He could smooth rough seas and calm their fears.”

Harley worked to expand his professional sphere, working with the late Lex Walters at Piedmont Technical College to start their funeral service program that teaches students the delicate skills of giving families a dignified farewell to their loved ones.

His decades with the Emerald City Rotary Club, which he helped establish, and the Greenwood Jaycees are paired with his work forming Hospice and Palliative Care of the Piedmont and serving on the capital campaign committee that helped get the Hospice House built. To enumerate every ounce of good he’s done for Greenwood and its residents would take pages, since he’s been a tireless advocate for the city and a dedicated volunteer.

Perhaps his most recognizable volunteer efforts have been his work with the S.C. Festival of Flowers. He is the event’s only five-time chairman, and served multiple times on the steering committee. His last time as chairman was to head up the event’s 50th anniversary, which he brought his years of experience and knowledge to bear for.

His vision and drive were key components in the success of the festival’s founding in 1968, and he was part of the group that introduced the now-iconic topiaries in 2008.

“He has been there since the beginning,” said Kathryn Smith, who first conceived of the topiaries project. “I don’t know exactly how to explain it, but he’s been the heart of everything. He never gave up; he knew this was good for Greenwood.”

Kay Self, who was director of the festival that year while Harley served as chairman, said everyone working on the festival has a shared passion for Greenwood and a genuine love for the city and its people. Harley, she said, was always a standout volunteer who stepped forward whenever help was needed.

“We just had those out-of-the-box ideas and a committee that worked really well together,” she said. “Everyone loves Ruple — he is solid for this community. You can always count on him to give his time and talent for Greenwood.”

When Richard Thomason took the role of the 2018 festival chairman, he said Harley’s advice and guidance were key to the event’s success.

“When he speaks, we all listen, because we all know he’s been the heart of the Festival of Flowers for 53 years — since the festival began,” Thomason said.

That accountability and dedication have earned Harley a number of commendations and recognitions for his service. Starting in 1973, he was presented the U.S. Jaycees Distinguished Service Award and was recognized by the U.S. Small Business Association with the Jeffrey Butland Family-Owned Business of the Year award in 2008. After the 50th anniversary S.C. Festival of Flowers, he was given a Chairman’s Award for his years of service, followed by the Southeast Festival and Event Association giving him the Best Volunteer Award in February 2019.

Review: An unlikely friendship is at the heart of 'Burden'