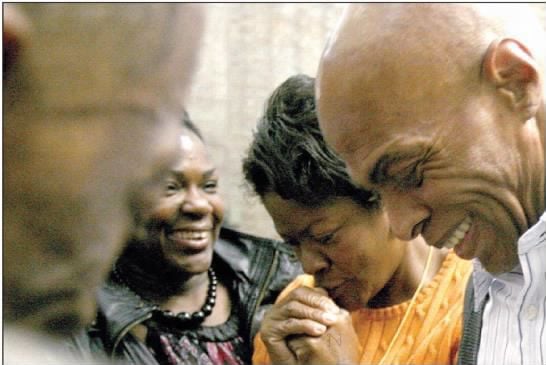 In this 2012 photo, Edward Lee Elmore celebrates being released from jail after 30 years in prison for the 1982 killing of Greenwood's Dorothy Edwards. Elmore died Monday. 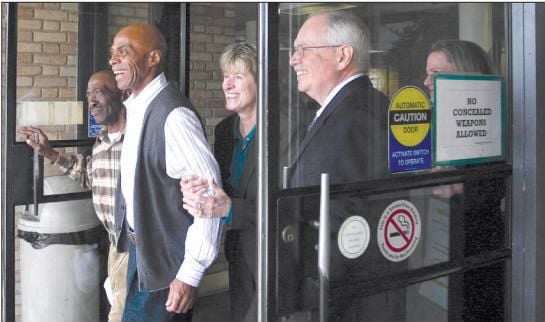 In 2012, Edward Lee Elmore left the Greenwood County Courthouse a free man after 30 years incarcerated for the 1982 killing of Dorothy Edwards. He entered an Alford plea, acknowledging that he'd likely be found guilty if the case were to be tried again. 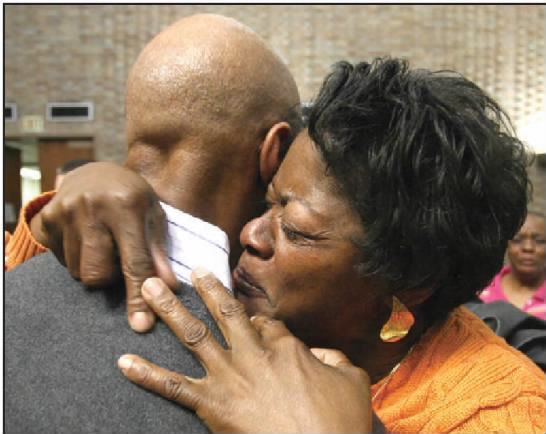 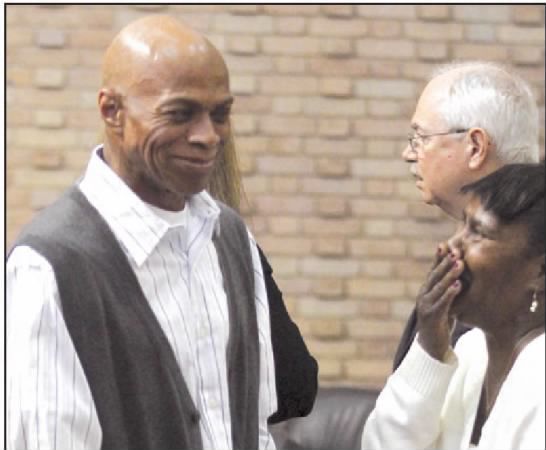 Edward Lee Elmore greets relatives before being released from jail in 2012. One of his attorneys, Christoper Jensen, said Elmore was a ceaseless optimist during his 30 years of incarceration.

In this 2012 photo, Edward Lee Elmore celebrates being released from jail after 30 years in prison for the 1982 killing of Greenwood's Dorothy Edwards. Elmore died Monday.

In 2012, Edward Lee Elmore left the Greenwood County Courthouse a free man after 30 years incarcerated for the 1982 killing of Dorothy Edwards. He entered an Alford plea, acknowledging that he'd likely be found guilty if the case were to be tried again.

Edward Lee Elmore greets relatives before being released from jail in 2012. One of his attorneys, Christoper Jensen, said Elmore was a ceaseless optimist during his 30 years of incarceration.

After three decades behind bars, Edward Lee Elmore was granted six years of freedom before his death.

He spent 11,000 days in jail for a murder he and his attorneys maintained across decades he did not commit.

According to a relative, he woke up that morning in his Columbia home, poured himself a cup of coffee and went out to his front porch to enjoy it. As he sat there, his heart stopped beating.

On Jan. 16, 1982, Greenwood’s Dorothy Edwards, 75, was found dead after she was raped, beaten and stabbed. Edwards’ neighbor, former Greenwood County Councilman Jimmy Holloway, reported finding her body in a bedroom closet at her home.

Elmore, who was then 23, was a handyman who had performed work at Edwards’ residence. Holloway identified Elmore as a suspect for police. Within 48 hours, police arrested Elmore after finding a thumbprint matching his on the frame of Edwards’ back door, a number of his pubic hairs at the scene and blood on the clothes he had been wearing that day which matched Edwards’ blood type.

What followed was a legal back and forth that would keep Elmore behind bars for the majority of his life. He was convicted in 1982 and sentenced to death, but the conviction was overturned. A second conviction was followed by another death sentence, leaving him on death row until 2010, when his death sentence was vacated.

A life sentence later that year came with the possibility of parole, but a U.S. 4th Circuit Court of Appeals ruling overturned his conviction and leave an opening for his legal team to get him out of jail.

Throughout these convoluted legal battles, however, Elmore kept his patience and radiated a ceaseless optimism that one day he would have his freedom back, said Christopher Jensen, co-counsel on Elmore’s legal team.

“I first met Eddie in the early 1990s, and he was not what I expected,” Jensen said.

The gentle, smiling man he met had been convicted of murder at the time, but Jensen said from the moment he met Elmore he knew he wasn’t a killer.

“He was a sweet, gentle man living in conditions that were really quite difficult, but he had this optimism that everything would turn out for the better,” Jensen said. “He always remained cheerful and positive.”

The woman who championed Elmore’s innocence and led the fight for his freedom is Columbia-based attorney Diana Holt. She became involved with the case in the early 1990s when she reviewed the case as part of an internship at the South Carolina Death Penalty Resource Center.

Holt raised questions about evidence used against Elmore, testimony that went unchallenged in court and the willingness of Elmore’s initial defense attorneys to accept information the state provided. She, Jensen and others worked tirelessly to earn Elmore his freedom — though when he was released in 2012 he was not cleared of the charges.

Elmore agreed to an Alford plea, acknowledging that if a jury were to believe the facts of a case as the state presented them, he’d likely be found guilty. Edwards’ daughter, Carolyn Lee, agreed to a plea deal, hoping that a resolution to the case would finally give her peace and closure.

“When he walked out of that courtroom, his status was not innocent or not guilty, it was guilty under Alford,” said W. Townes Jones.

“Based on the evidence that was brought to the solicitor’s office, I always thought that it would be sufficient to establish guilt beyond a reasonable doubt,” Jones said. “I would certainly hope and pray that the time that he served for the crime he pleaded to went a long way toward rehabilitating him.”

Following the plea deal, 8th Circuit Judge Frank Addy sentenced Edwards on March 2, 2012 to 30 years in prison, with credit for his 30 years served.

“We had a stipulation in the plea that if we agreed to it we could walk him out through the front doors of the courthouse,” Jensen said. “It was really the greatest day of my life as a lawyer. I can’t tell you there’s been anything in my career as a lawyer that was as satisfying.”

Holt was unavailable to speak following the news of Elmore’s death, but gave Jensen a comment to share.

“I’m relieved that Eddie is no longer suffering and that he left the world as a free man,” she said.

Jensen said he kept in touch with Elmore in the years following his release. Though Elmore frequently struggled with his health, his spirits stayed as high as ever, Jensen said.

“He was always the same guy, inside of jail and outside of jail,” Jensen said. “I feel like I’m a better person just having known him — his life and his story.”

Indonesia looking for submarine that may be too deep to help