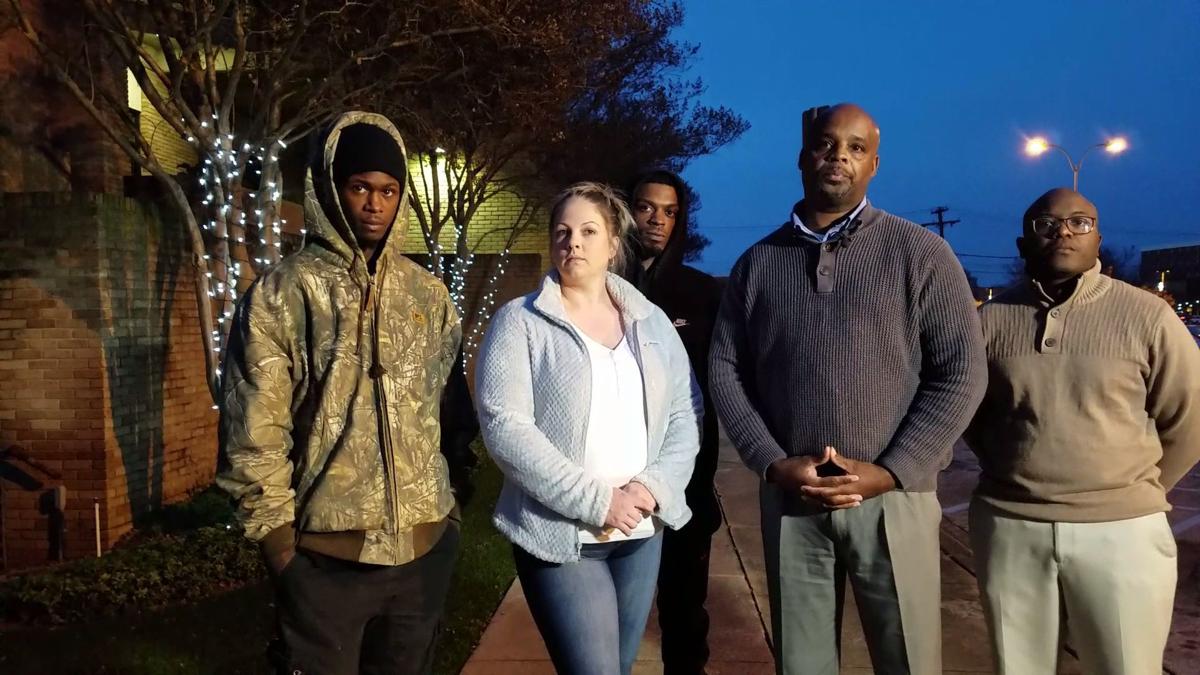 From left, Shyheim Alston, Ali Whatley, Shyheim Freeman, Bruce Wilson and Travis Greene gathered Monday evening for a press conference where Wilson addressed an obscene comment made by a police investigator during the investigation of the 2018 Greenwood Mall shooting. 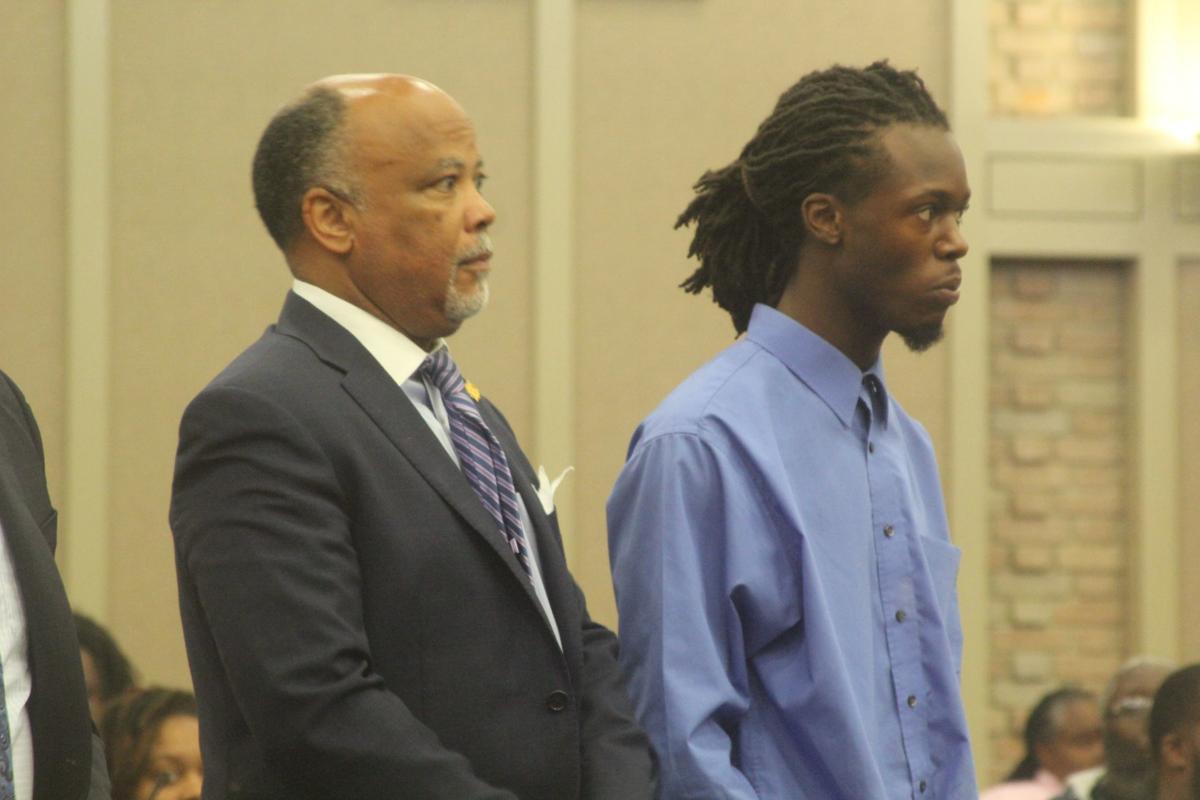 State Sen. Karl Allen, left, represented Shyheim Alston throughout the course of the multi-week trial of the six men charged, and later acquitted, in connection with the 2018 Greenwood Mall shooting.

From left, Shyheim Alston, Ali Whatley, Shyheim Freeman, Bruce Wilson and Travis Greene gathered Monday evening for a press conference where Wilson addressed an obscene comment made by a police investigator during the investigation of the 2018 Greenwood Mall shooting.

State Sen. Karl Allen, left, represented Shyheim Alston throughout the course of the multi-week trial of the six men charged, and later acquitted, in connection with the 2018 Greenwood Mall shooting.

An obscenity said in private by a Greenwood police captain sparked a Greenville activist to call for the officer’s removal — but Police Chief Gerald Brooks said that won’t be necessary because he’s learned his lesson.

Word of the obscene remark first came out Wednesday in the trial of the six men charged in connection with a 2018 shooting at Greenwood Mall. All six were acquitted Friday when Judge Brooks Goldsmith gave a directed verdict finding them not guilty on charges of attempted murder, weapon possession and breach of peace.

On Wednesday, while the trial was still underway, attorney Karl Allen played in court an excerpt of a recording made by Lt. Mike Dixon, lead investigator in the case. The clip was caught on a microphone left on by Dixon after he spoke with Allen’s client, Shyheim Alston. Dixon went to go speak with his then-supervisor, Capt. Mitchell McAllister, who said Alston was an “absolute f---tard,” then he laughed and said to Dixon, “Arrest him.”

Allen, in court, asked Dixon about the comment, and Dixon said he agreed it was inappropriate. On Monday, Allen said he was deeply troubled by the reference, which he said suggests there is a culture of accepting derogatory comments among officers.

On Monday, Greenville activist Bruce Wilson of Fighting Injustice Together came to Greenwood to voice his concerns over the comment as well, and to ask the chief to fire McAllister.

“I guess it’s a good thing for Capt. McAllister that he works for me and not Mr. Wilson,” Brooks said. “While it’s unfortunate that Capt. McAllister made that remark, I believe that the application of discipline must be guided by fairness.”

Brooks said every disciplinary case is different, and that he considers officers’ motivation, the degree of harm, whether the error was intentional and the officer’s record. While McAllister had “a poor choice of words,” Brooks said that’s something nearly everyone has done at some point.

“Balancing his error against his past record, Capt. McAllister has served the citizens of Greenwood with honor and distinction,” he said.

Brooks said McAllister was counseled regarding his comment, but that no additional training will be required of him.

“There was no instruction we could provide that would improve upon the lesson he had already learned when the recording was played in court,” Brooks said.

For Wilson, the chief’s words were a start, but not enough.

“I appreciate his willingness to let us know that what the captain had done was wrong and that he will challenge the captain on this, but I think it’s a little deeper than what he took from us,” Wilson said.

Like Allen, Wilson said McAllister being in a supervisory role and making a comment like this could be indicative of a systemic attitude among officers. Additionally, as a supervisor, McAllister’s words could have influenced the attitudes of officers he supervised, Wilson said.

Wilson renewed calls he has made in the past for the city to implement a citizen review board that would offer oversight into disciplinary matters at the police department. He also said he wants to get the U.S. Department of Justice involved, to look into how the six men were put on trial in a case that the judge said lacked sufficient evidence to go to a jury.

As for McAllister, he responded to Wilson’s call for his termination by quoting John 8:7, “Let he who is without sin cast the first stone.”

“While I am not proud of my choice of words, I (as well as every police officer) am human,” he wrote in an email. “I do not imagine that there is any person that at sometime or another has not said a cross/frustrated word in confidence to another person.”

McAllister said he speaks out of frustration and makes mistakes, but said he has done his best to uphold the law and will continue to serve Greenwood’s residents to the best of his abilities.

Alston, along with former co-defendant Shyheim Freeman and the mother of Isaiah Whatley, showed up to join Wilson in his press conference in front of City Hall. Alston and Freeman declined to comment, but Ali Whatley spoke about the past 15 months and the struggle her family faced leading up to the verdict.

“This has been an overwhelming experience, not only for me but for my son, my two daughters,” she said. “I’ve learned a lot sitting in that courtroom for the last three weeks.”

She said she was glad that the judge saw what she saw: That there wasn’t enough evidence to convict and potentially put the six men behind bars for decades.

“It’s still hard to deal with because now you have to pick the pieces back up and figure out, now what do you do next,” she said. “My son, he lost his senior year of high school. He didn’t get to go off to college and play ball like he planned to.”

She said since they’ve been acquitted, she knows her son and the other five men will succeed in whatever they choose to do moving forward.

PHOTO GALLERY: A selection of pictures from the past week

John Rosemond: How far is too far?

Deputy back at work after SLED investigation clears him