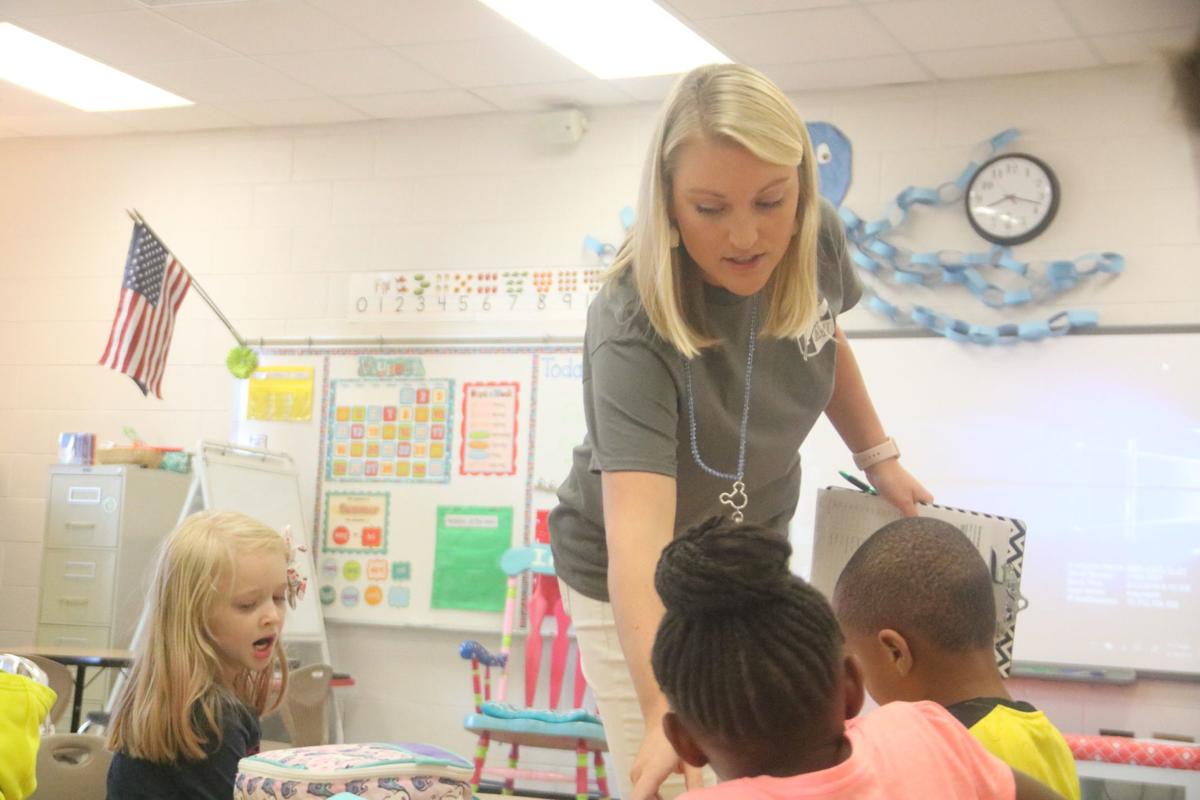 Randi Maynard helps her kindergarten students on their first-ever day of school Monday. 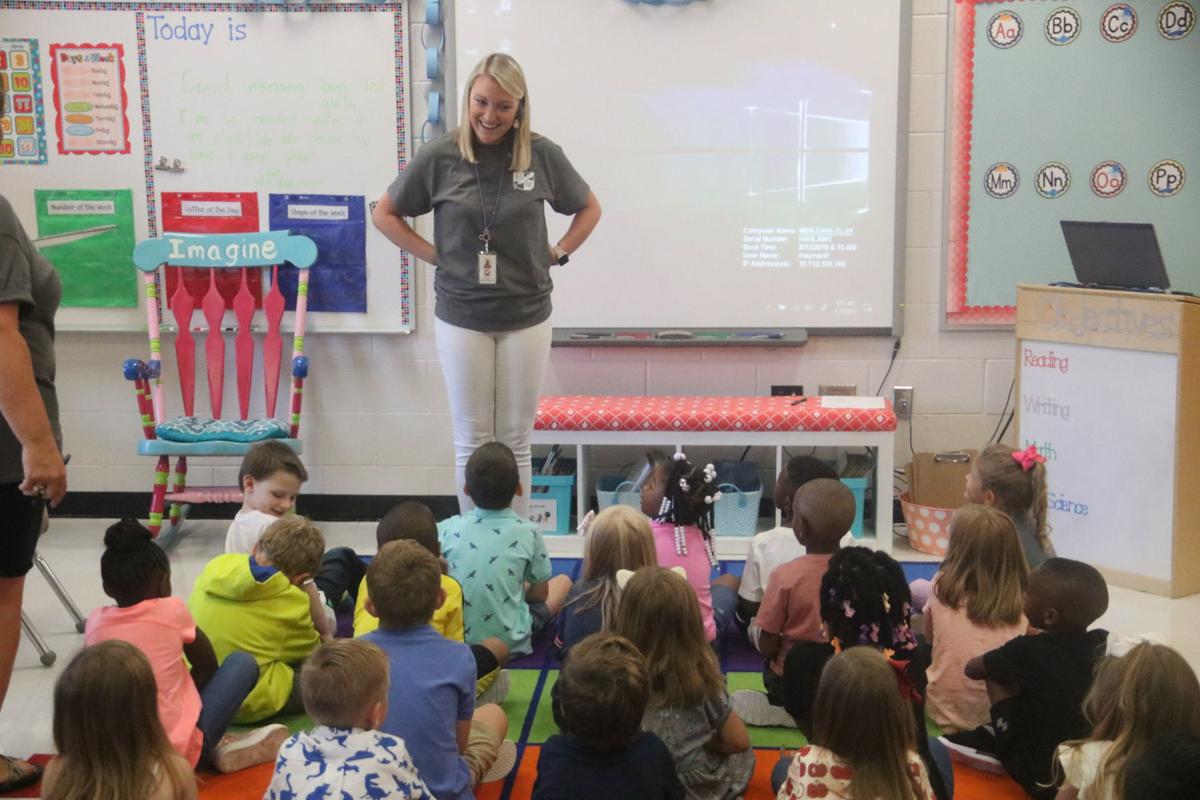 Randi Maynard corrals her kindergarten students onto the rug at Merrywood Elementary School on the first day of the 2019-20 school year. 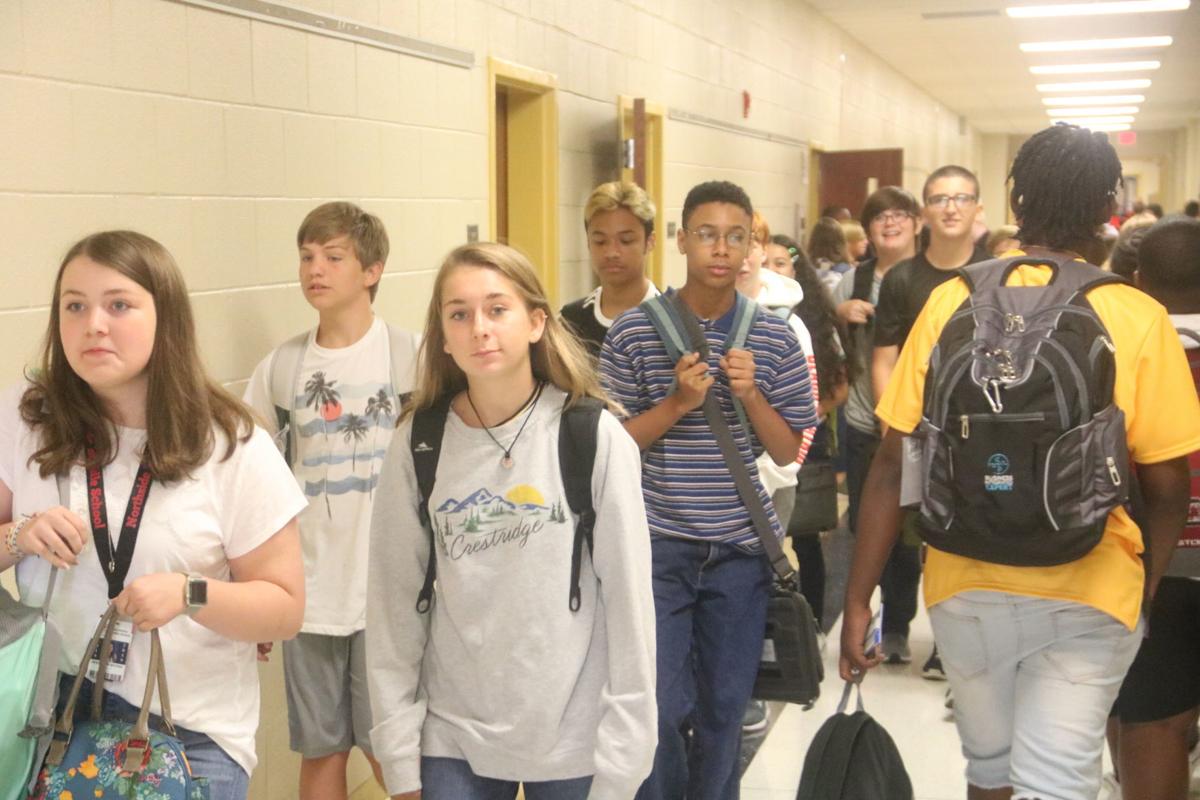 Students flood the halls between periods at Northside Middle School on the first day of the 2019-20 school year. 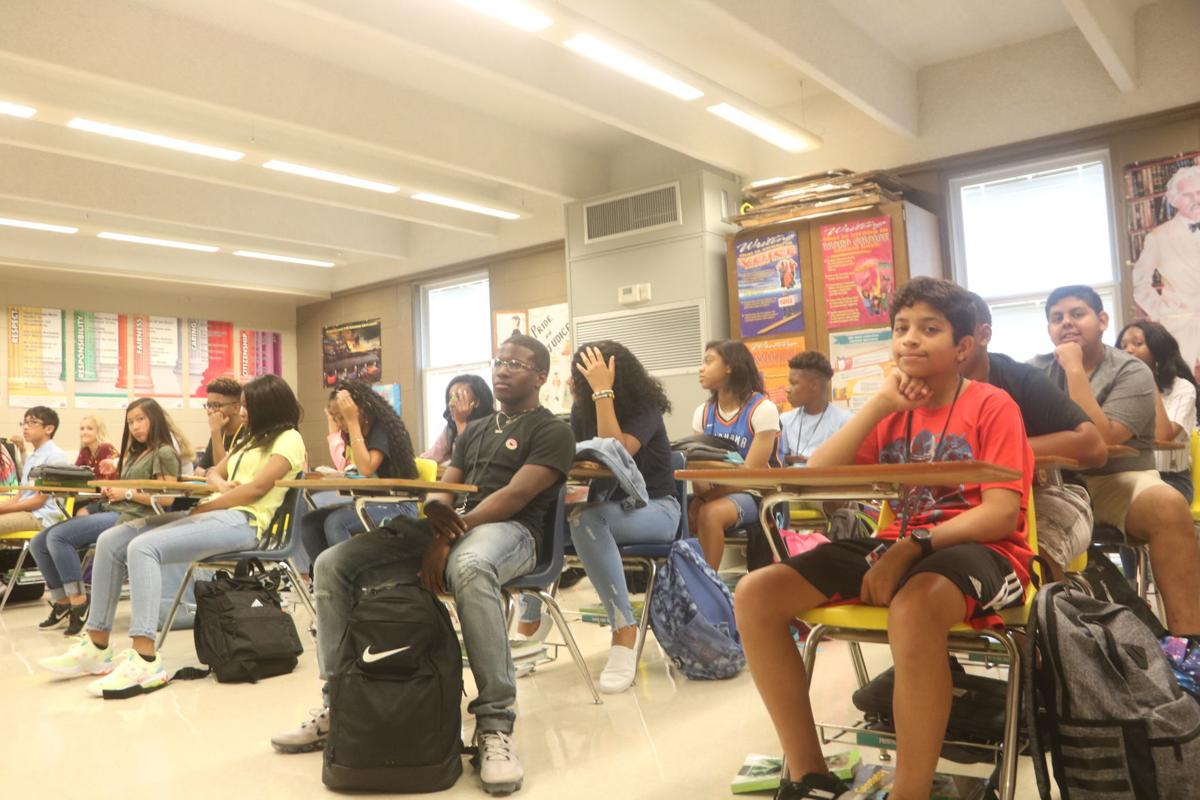 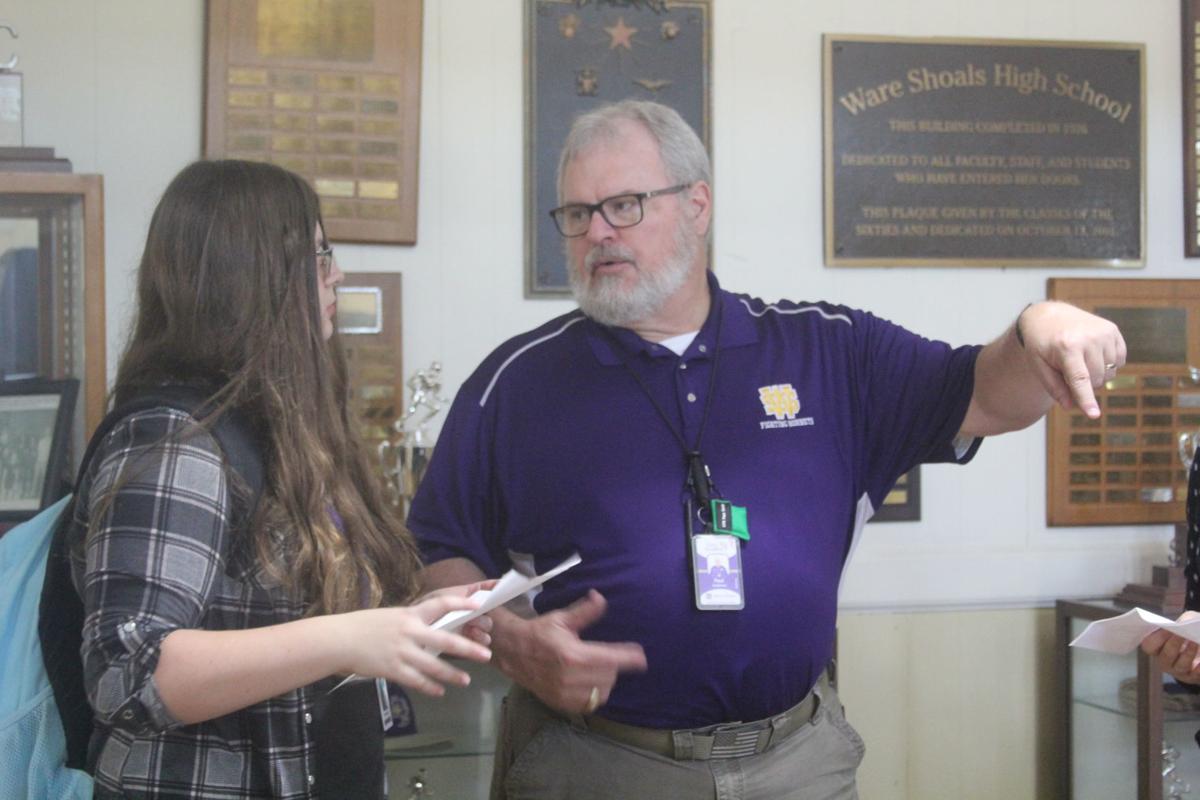 Ware Shoals High School Principal Paul Anderson was out in the hallway Monday morning whenever the school's bell rang to help freshmen find their way to their new classrooms. 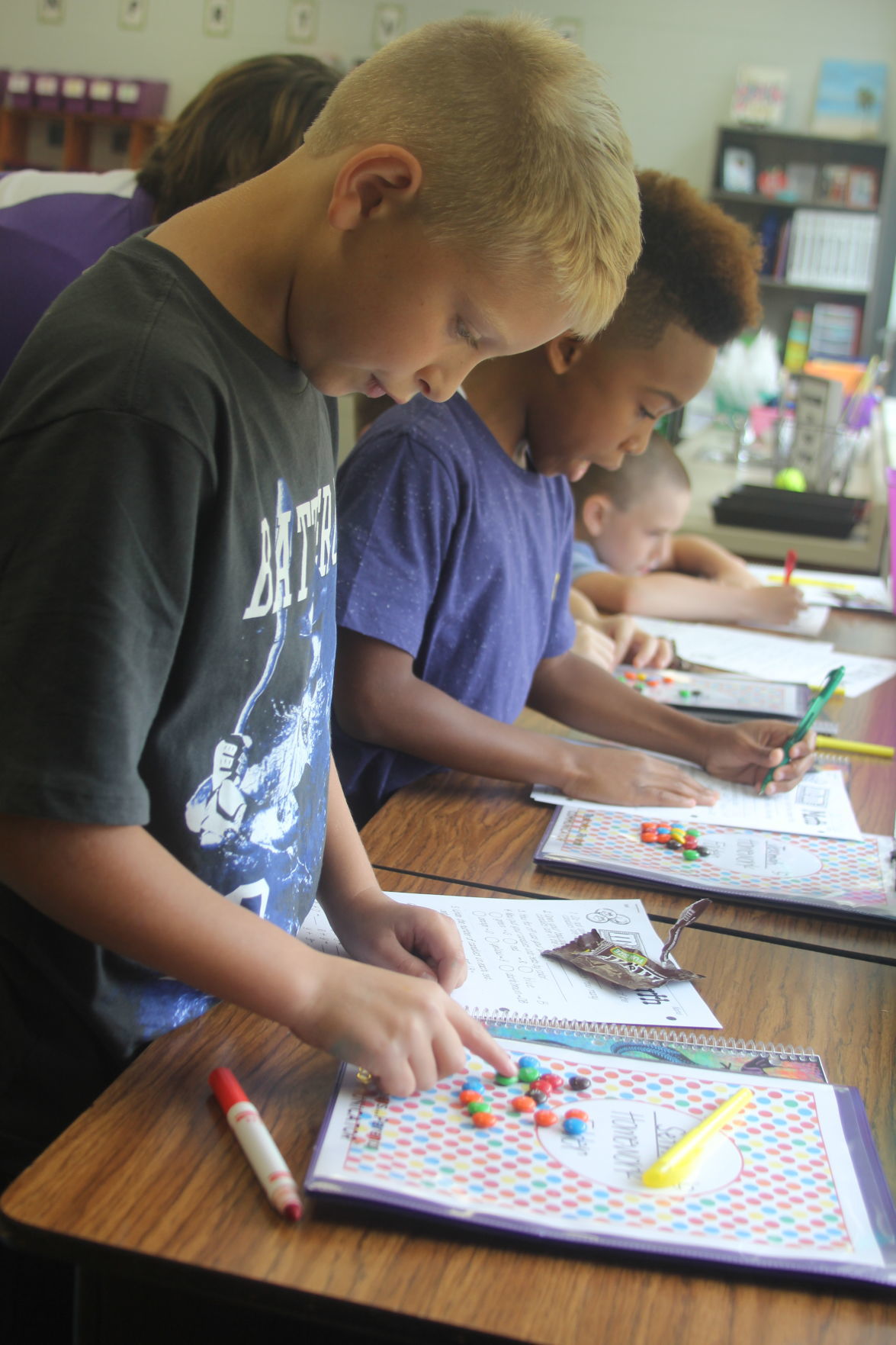 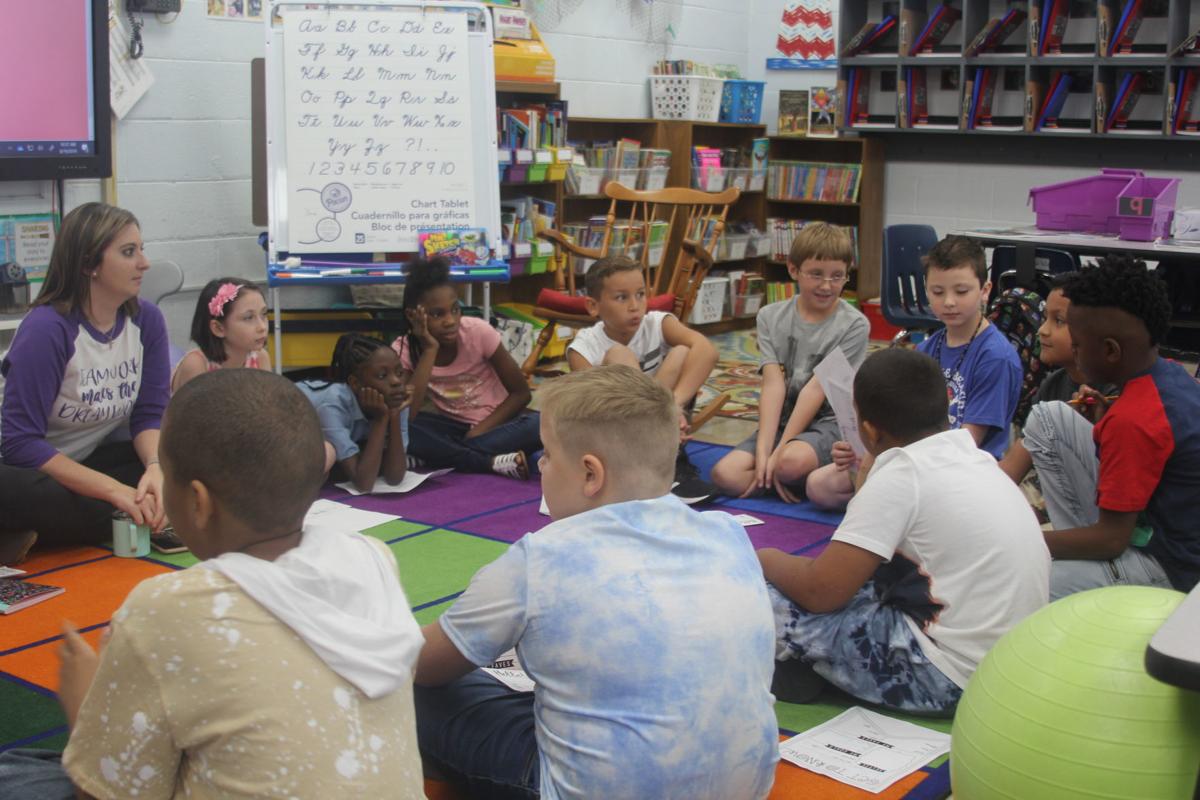 Students took the time to introduce themselves to one another Monday morning as part of their first day of the new school year at Ware Shoals Primary School. 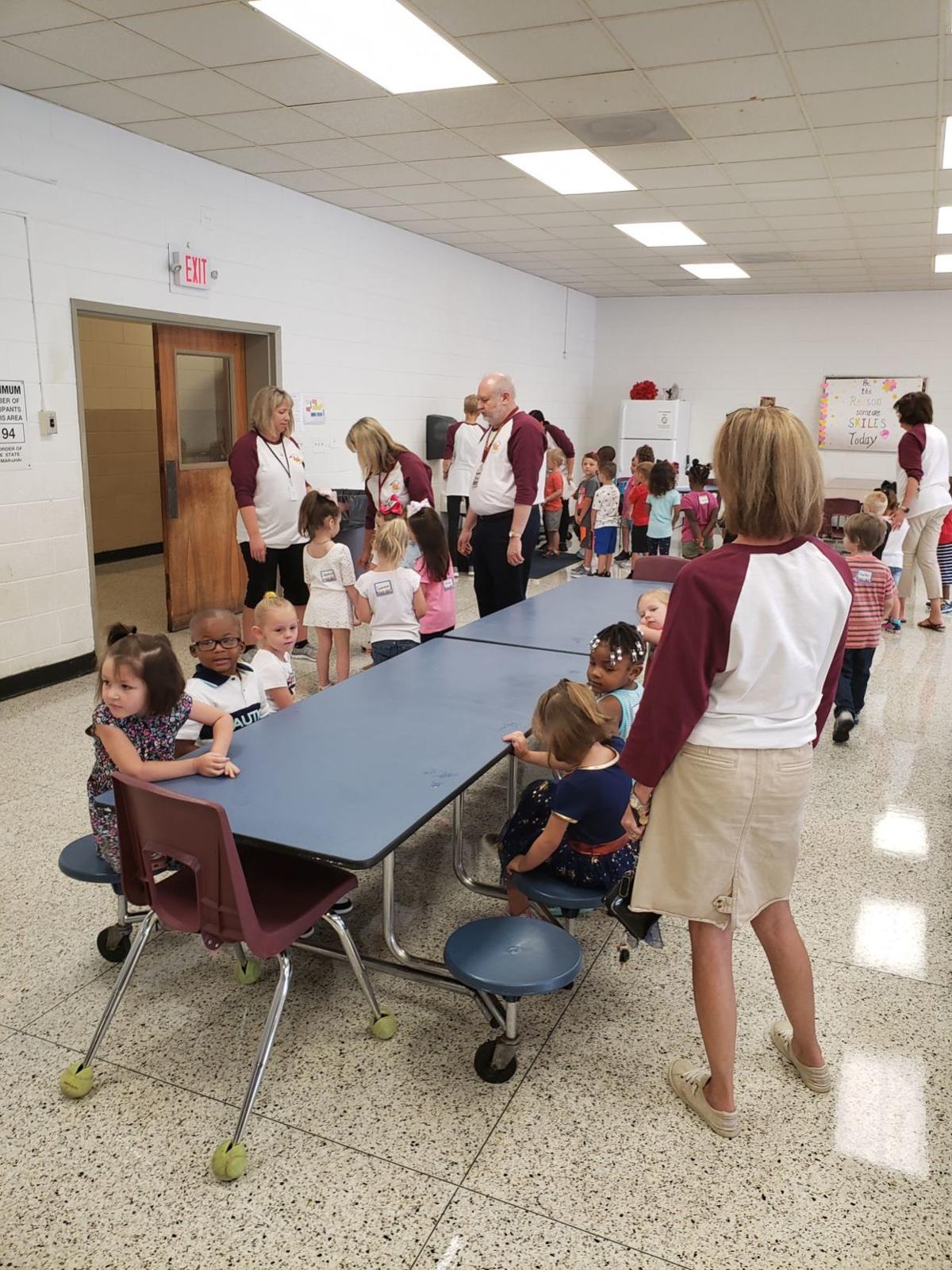 Randi Maynard helps her kindergarten students on their first-ever day of school Monday.

Randi Maynard corrals her kindergarten students onto the rug at Merrywood Elementary School on the first day of the 2019-20 school year.

Students flood the halls between periods at Northside Middle School on the first day of the 2019-20 school year.

Ware Shoals High School Principal Paul Anderson was out in the hallway Monday morning whenever the school's bell rang to help freshmen find their way to their new classrooms.

Students took the time to introduce themselves to one another Monday morning as part of their first day of the new school year at Ware Shoals Primary School.

Christopher Moseley wanted to know his students better. So he gave them an assignment.

“Why are you interesting? Tell me why you’re interesting,” he challenged his third-graders at Merrywood Elementary School on Monday morning. “Maybe you have 6 toes?”

The scene played out in classrooms across Greenwood yesterday, as students in the county’s three school districts — 50, 51 and 52 — returned for the 2019-20 school year.

One of Moseley’s students claimed the status of “class clown.”

“You can’t beat me,” said Moseley, a sixth-year teacher who moved to Greenwood last year from Miami, Florida. “I’m the class clown in here.” He wanted to know whether his students have any pets, and reminded them that little brothers don’t count.

“Last year I had to learn a lot of new things,” Moseley said. “This year, I get to perfect them and grow.”

On the other side of Merrywood, kindergarten teacher Randi Maynard welcomed the 25 students in her class to their first-ever day of school. The first couple of days are all about protocol, she said: how to use the bathroom, walk in the hallway, or raise their hands when they want to speak or ask questions.

“They came in ready to go — all but one. One had a hard time,” Maynard said. Usually, half struggle to bid their parents goodbye.

Zoey Lindley, one of Maynard’s students, said she saw the “Angry Birds” movie over the summer and was excited to learn — though what exactly she would learn, she wasn’t sure.

Nearby, Tristian Edwards-Carson was enjoying the smell of hand sanitizer, which he had shared with a new friend.

And then, class started. Maynard corralled the kids, who had been sitting at little tables, into rows on the rug.

“And some of you have your hands in your lap!” she said in mock surprise. “Have you been to kindergarten before?”

“No!” the kids yelled in unison.

Later that morning, Principal Brian Perrin dropped in on a fourth-grade class to wish them a great year.

“Greenwood High is the best!” One of the students said, unprompted.

“You’ve got a couple years before you go to Greenwood High, buddy,” Perrin said. “We got to get you there first.”

Ninth-grader Marcus Barnes, 14, is among the 1,547 who have already made it there.

“It feels different because when I go to my (psychology class) I got seniors, juniors, sophomores and freshmen in the same classroom,” he said. “It feels like I can ask anybody anything.”

He said he expects to learn a lot this year. But first, “I want to learn all my classes, where they’re at,” he said, smiling.

Downstairs, students lined up outside of a room stocked with textbooks. Lendy Westmoreland, 17, was among them. A 12th-grader, she had just begun her last first day of school.

“Everybody’s so excited. They’re ready to get out of high school and get it done,” she said. She has mixed feelings, though. She could hardly contain her excitement when she talked about walking across the stage at graduation and eventually attending a four-year college, but she also said she would miss high school.

At Northside Middle School, Gregory Rice was going over expectations and procedures with his sixth-grade social studies class. There’s a new rule that is sure to irk some students: phones are to be kept in lockers or bookbags, and they’re to be turned off.

Lindsay Ashley, an eighth-grade social studies teacher, said she was excited by the district’s new superintendent, Steve Glenn, and a couple of experiments at Northside, such as the cellphone ban and rewarding eighth-graders with extra privileges.

Knight recently earned her teaching certification. She began at Northside as a cafeteria worker before moving to the library, front office and, in the 2016-17 school year, a classroom. It was something she had wanted to do, she said.

“About three weeks into the summer I’m already planning what we’re going to do.”

At an assembly, Principal Jim Still exhorted eighth-graders to step up and be the campus’s student leaders.

“This is their last year of middle school,” he told the Index-Journal. “They know our expectations and routines.”

At a subsequent assembly for seventh-graders, Still asked the crowd of students whether they were excited to come back to school.

He tried to introduce the students to the school’s motto, “Best is the standard,” by going through more familiar ones first: “Just Do It” (Nike); “Finger Lickin’ Good” (Kentucky Fried Chicken); and “America Runs on Dunkin’” (Dunkin’, formerly known as Dunkin’ Donuts).

Eventually he got to Apple’s “Think Different.”

“The eighth-graders couldn’t get this one,” he told the group. “Who is it?”

“School!” one student yelled out.

District 52Meanwhile, about 13 miles away, Andrea Fulmer, Ninety Six Primary School’s new principal, was ready to go. She was helping to work out first-day logistics even as she grew more acclimated with her own duties and staff.

“The first day of a new school year, nobody sleeps the night before,” Fulmer said.

Moving over from District 50, Fulmer said the small-town atmosphere and broad support from the town makes going to school a joy — and the 370 students at Ninety Six Primary quickly fell back into their familiar routines.

“It is just a community school. There’s a great deal of pride here, so we’re very fortunate to have that support,” Fulmer said.

And the students” know where to go and what to do,” she added.

In the cafeteria, 4-year-old kindergarten students were spending their first ever day at school, learning over breakfast about hallway rules.

“It was great to see lots of kids come in their cute back-to-school clothes on,” Fulmer said.

District 51Monday was Jason Morrison’s first morning as principal of Ware Shoals Primary School, but he’s won many of his students over like he’s been a long-time friend.

As he walked into one classroom, a handful of students stood to rush toward him and give him a tight hug. That’s part of what Morrison enjoys about working in this smaller district — Ware Shoals’ tight-knit community means everyone knows each other and they look out for one another.

“This district is awesome. We’ve got a great superintendent and assistant superintendents,” he said. “It’s so awesome. The one thing about primary students is they love school.”

Their excitement is infectious, Morrison said, and as he and the school’s staff ready themselves to spend the school year guiding these children toward a successful future he said the district’s motto of “destination graduation” is always fresh on their minds. They encourage children to think about their futures and envision what they want to be when they grow up, and refer to their youngest students as the “Class of 2033.”

“We’re all in this together,” Ware Shoals School District 51 Superintendent Fay Sprouse said. “Children will live up to your expectations if you let them. The saying goes that it takes a village to raise a child. Well, we are the village.”

Sprouse said the first day went smoothly across the district’s three schools. Ware Shoals Middle School Principal Nancy Brown said she was so confident the first day would go well that she slept more soundly the night before than she usually does.

“I have an amazing faculty and staff, so there were no worries,” she said. “I was so excited to see the kids back. It’s just not school without the kids.”

Walking through the halls and celebrating students’ new shoes and outfits is a thrill for her, she said, and she loves getting fist-bumps from her returning students. For Jeneen Webb, a veteran teacher who is at Ware Shoals middle for her first year, it seemed as if every student could tell this was her first year at the school. One of her students walked up to her in the hallway, shook her hand and introduced himself, welcoming her to the community.

Those are the kinds of things Webb said she loves about teaching middle school — unexpected moments.

“Every day is so different with this age group,” she said. “When I get out of my car, I’m so excited to come to work.”

That excitement is carried through to the high school, where principal Paul Anderson was out helping direct traffic in the parking lot and in the hallways. Freshman students flocked to him when the bell rang so he could help navigate them to their next class. In total, he said the school will likely have about 80 freshmen by the time things fully settle.

“It’s the largest freshman class I’ve ever had,” he said. “It means we’re growing. We’re not going away.”

Despite his career having had dozens of first days, he said he always feels the excitement in the air when students come back to school for the first time after summer. Part of it is seeing them embark on the journey of learning, whether it’s in the high school’s halls or off campus in dual-enrollment classes.

“Whether you’re seeing new faces or seeing folks coming back, I always get excited every first of the year,” he said.

Did Klobuchar help send an innocent teen away for life?