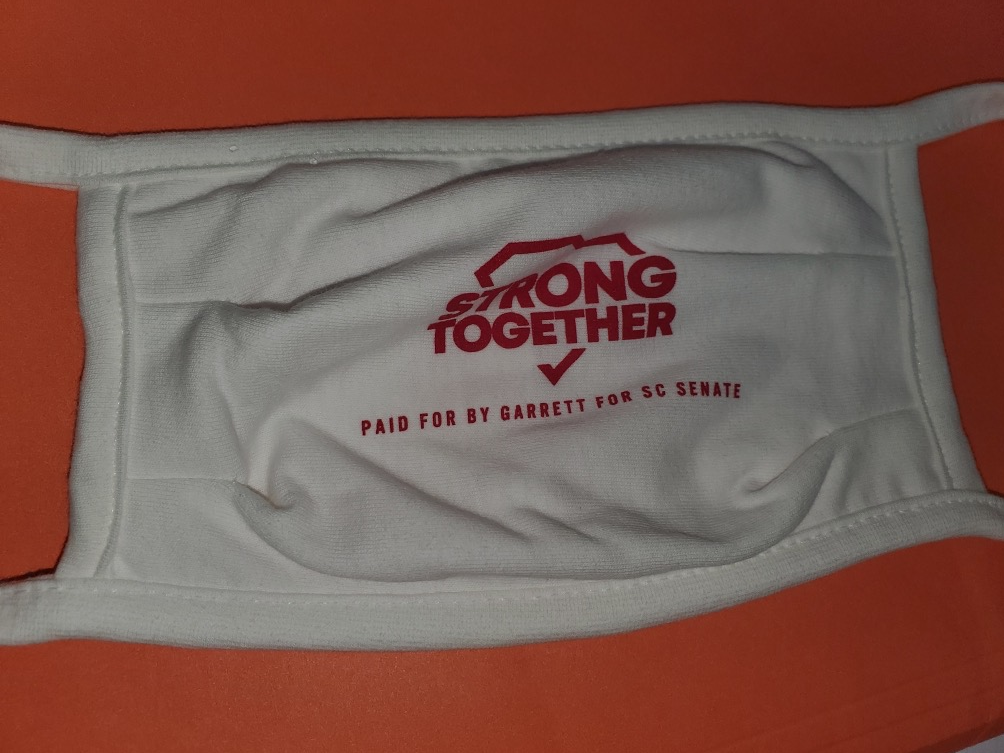 Masks are an important piece of protective equipment a person can use to prevent the further spread of the novel coronavirus. State Senate candidate Billy Garrett decided to distribute masks and, in doing so, he might have violated South Carolina law.

On May 1, Garrett and his campaign stopped at the Greenwood County Courthouse, the Abbeville Court Square, the McCormick County Sheriff’s Office and the Saluda County Courthouse to distribute masks paid for by his Senate campaign.

The washable cloth masks had “STRONG TOGETHER” printed inside the outline of the state of South Carolina with “PAID FOR BY GARRETT FOR SC SENATE” below.

The masks were distributed to law enforcement, firefighters, EMTs and their families, according to a press release from Garrett’s campaign.

According to the S.C. Code of Laws Section 8-13-1346, “a person may not use or authorize the use of public funds, property, or time to influence the outcome of an election.”

Similarly in Section 8-13-765(A) it reads “no person may use government personnel, equipment, materials, or an office building in an election.”

The campaign gave masks to the sheriff’s offices of Greenwood, Abbeville, McCormick and Saluda counties as well as EMS, police and fire departments operating within those counties.

Some of the 5,000 masks from the Garrett campaign made it to county employees of Greenwood County but those masks were returned after it was discovered they contained “an inscription that was deemed to be campaign paraphernalia,” according to County Manager Toby Chappell.

The masks were returned with a note from Chappell explaining that because Greenwood County receives federal funding, the use of campaign material by county employees would violate the Hatch Act.

The masks made their way to Greenwood City employees and were returned, City Manager Julie Wilkie said.

Chappell also confirmed the campaign used county property to distribute the masks, although advance notice or permission was not sought from the county manager’s office.

“Greenwood County property was used only to the extent that Mr. Garrett, and others, gathered between the sidewalk and the flower beds that front the Greenwood County Courthouse,” Chappell wrote in an email. Garrett said he is fine with the return of the masks.

“Some of my good friends in the government have some issues because it was paid for by the Garrett for Senate campaign,” he said, also citing the requirement of placing who paid for the materials on campaign materials.

As to the laws that prohibit government property and government employees from using these masks, Garrett said those are rules and regulations that President Trump is trying to get rid of.

“Stupid stuff that inhibits people in times of war or in times of emergency, these masks were designed and were offered in a sense of trying to help folks,” Garrett said.

Regarding the distribution of masks on public property, Garrett said that’s where he was told to go. “I called them and asked them, did they need the masks. They told me they needed them,” Garrett said.

He was then told by first responders that he could deliver them at the courthouse, according to Garrett, whose office is across the street from the Greenwood County Courthouse.

US cities gird for more violence as Trump decries `lowlifes'

The Latest: Los Angeles police have arrested more than 2,700

The Latest: Los Angeles police have arrested more than 2,700