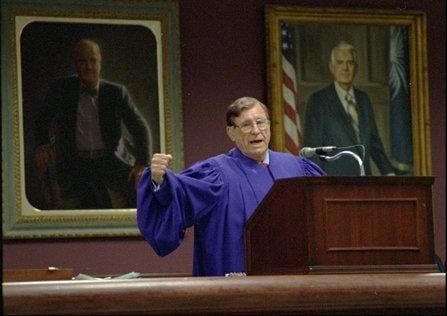 Associated Press File Sen. John Drummond gestures as he addresses the Senate after being sworn in as president pro tempore on the opening of the l996 South Carolina Legislative session. 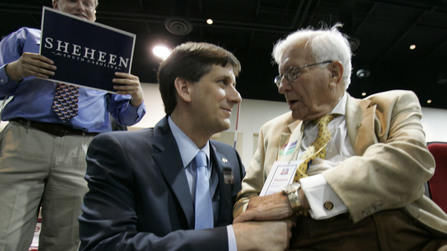 Associated Press File Sen. John Drummond gestures as he addresses the Senate after being sworn in as president pro tempore on the opening of the l996 South Carolina Legislative session.

COLUMBIA – The death of former state Sen. John Drummond closed the book on a lawmaker who grew up in the segregated South yet pushed progressive ideas and who once took the Confederate flag from the chamber during a sizzling battle to remove the banner from the State House dome.

The retired senator from Ninety Six, who served more than four decades in the upper chamber, died Saturday at age 96. The Greenwood County representative also was a decorated World War II pilot captured by the Nazis.

"I considered John Drummond to be just a great American and a dedicated South Carolinian and one of the most wonderful senators that we have ever had," retired state Sen. John Land said Sunday.

"He was just a special, special South Carolinian. The stamp he put on South Carolina will last forever," said Land who, like Drummond, is a Democrat and became Senate majority leader. "His time as chairman of the Senate Finance Committee and president pro tempore of the Senate, if you look back on it, is probably one of the most progressive times South Carolina has ever enjoyed."

Drummond, who rose to become the Senate's top leader, embodied World War II's greatest generation of Americans who lived through the Depression, defended the nation in a world crisis and returned home to make a mark in their communities, many who knew him said Sunday.

"He was a living legend in so many ways," said former Republican Gov. David Beasley. "He was a great statesman and a great patriot. South Carolina is better because of him, no question about that. He lived a great life."

"A true patriot in the greatest sense of the word," added Sen. John Courson, a Columbia Republican who served with Drummond for more than two decades.

"It was my great privilege to serve in the Senate with John Drummond," Setzler, the chamber's minority leader, said in a statement Sunday. "He was a true American hero of World War II who dedicated his life to serving his nation, his state, and the people of Greenwood County. He was a statesman in every sense of the word who put his God, his country and his family above all else."

Setzler said he has asked Gov. Nikki Haley to consider flying the flag at half-staff.

In a statement Sunday, Haley said, "John Drummond was born to serve, and he lived an extraordinary life. Michael and I lift up the Drummond family in prayer and join them in giving thanks for Senator Drummond's sacrifice and service."

Land said Drummond's No. 1 accomplishment lies with schools. "He saw to it that children in South Carolina were adequately educated. That to me is what he should go down in history for."

Drummond represented Greenwood County for more than four decades, retiring in 2008 as the GOP takeover of the Legislature strengthened.

Born Sept. 29, 1919, into a family of mill workers, Drummond served as a pilot and paratrooper in World War II. He spent 10 months as a prisoner of war after his plane, "Raid Hot Mama," was shot down in 1944 over France.

As a fighter pilot, Drummond once recalled that he flew cover over Normany as the Allies invaded on D-Day while Strom Thurmond landed in a glider. Drummond, who would become friends with the future U.S. senator, told the story at Thurmond's 100th birthday party.

When he returned home, Drummond went from soldier to businessman, baking and selling doughnuts at Golden Rings before getting into the oil distribution business and starting Drummond Oil Co.

Drummond was first elected to the state House of Representatives in 1964, serving one term. He joined the Senate two years later, where he served 42 consecutive years in office, where he would rise from being a Senate maverick to chairing the Finance Committee and to the senior leadership post of president pro tempore.

His fights for more money for public schools were laced with filibusters, which he also employed to support teachers' rights to have association dues deducted from their paychecks. Drummond fought Beasley's plan to eliminate all residential property taxes, arguing there needed to be a cap so that the wealthiest property owners would continue to pay taxes.

Jim Hodges, the most recent Democrat to be elected governor in South Carolina, said Drummond was the last of the state's rural senators to rise to the top position in the Senate, where senators once controlled local government.

But as Republicans began to take control of state government, Drummond was able to work across the political aisle, Hodges said.

"I wish we had more people like John Drummond in service across our country," the former House member and governor said. "He believed that once elections were over, you still work together to accomplish things and not work for your political party."

Hodges recalled that during final State House negotiations of the state budget, Drummond had a habit of hosting fish fries for the bipartisan committee that drafted the final budget.

"We'd all sit down, eat fish and drink together," Hodges said. "That would facilitate agreement. You can solve a lot of problems over a bourbon."

"If Tom Brokaw (author of "The Greatest Generation") was looking for somebody else to put in the book, Sen. Drummond would fit right in there," Hutto said.

"He was somewhat a contemporary of Strom Thurmond and kind of came right on up through that era," Hutto said. "He lived during that time when he knew all of the leaders of this state from the 40s through the 2000s when he finally retired."

Hodges, noting that Drummond was of the age of many legislative leaders' fathers, said the senator was "in a lot of ways a father figure."

As the Senate's leader, Drummond worked to reach a hard-fought compromise in 2000 to remove the Confederate flag from the State House dome.

A memorable moment in removing the Confederate flag from the dome came as Drummond neared the end of his tenure as Senate leader. That fight, he would say later, was among the most trying issues of his decades in the chamber.

As crowds waited outside the capitol in scorching July weather, Drummond said he climbed a ladder and took down the banner in the Senate.

He carried it out the back door of the State House to his waiting car and drove it to the Confederate Museum, Drummond once recounted.

Drummond never shied away from a fight but never alienated his colleagues either, then-Sen. Glenn McConnell, R-Charleston, once said of Drummond.

During the flag dispute, Drummond brokered a solution between two sides that agreed on little.

"He nudged us and massaged us. John's pretty persuasive," McConnell said, before Drummond's retirement. "He'd just come over and say 'Time we work this out.'

"Nobody had the type of deep resentment of him that they dug in their heels."

Beasley, widely believed to have lost a re-election because of taking the flag from the dome, said Sunday that the senator played a key role in the flag compromise.

"You would not have had a compromise without him," Beasley said. "He was the leader of the Senate."

S.C. Democratic Party chairman Jaime Harrison on Sunday thanked the Drummond family for his years of service. "We thank them for Senator Drummond's long life making our state, our country, and the world a better place," Harrison said in a statement. "As we remember him, we strive to cultivate his selfless servant leadership within ourselves. We need more like him."

Rice Elementary Student-Athletes of the Month

Women in Manufacturing: ‘This is Where the Money Is!’

DAR set to lay 1,400 wreaths for veterans next weekend

Giant Sequoias are nearly impossible to kill. Climate change is changing that

Zakaria says this is the highest-stakes diplomacy Biden has conducted