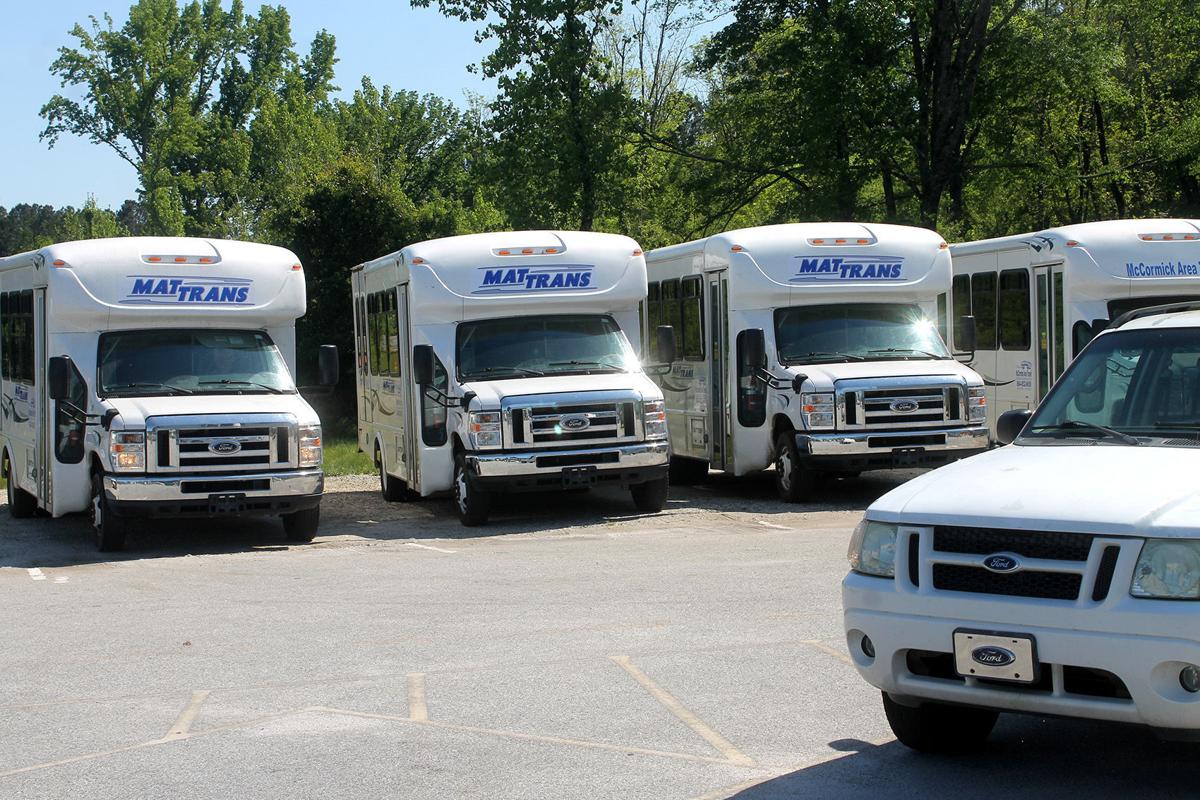 Several vehicles make up the fleet of vehicles for McCormick Area Transit from minivans to cutaway buses. All are ADA-compliant. 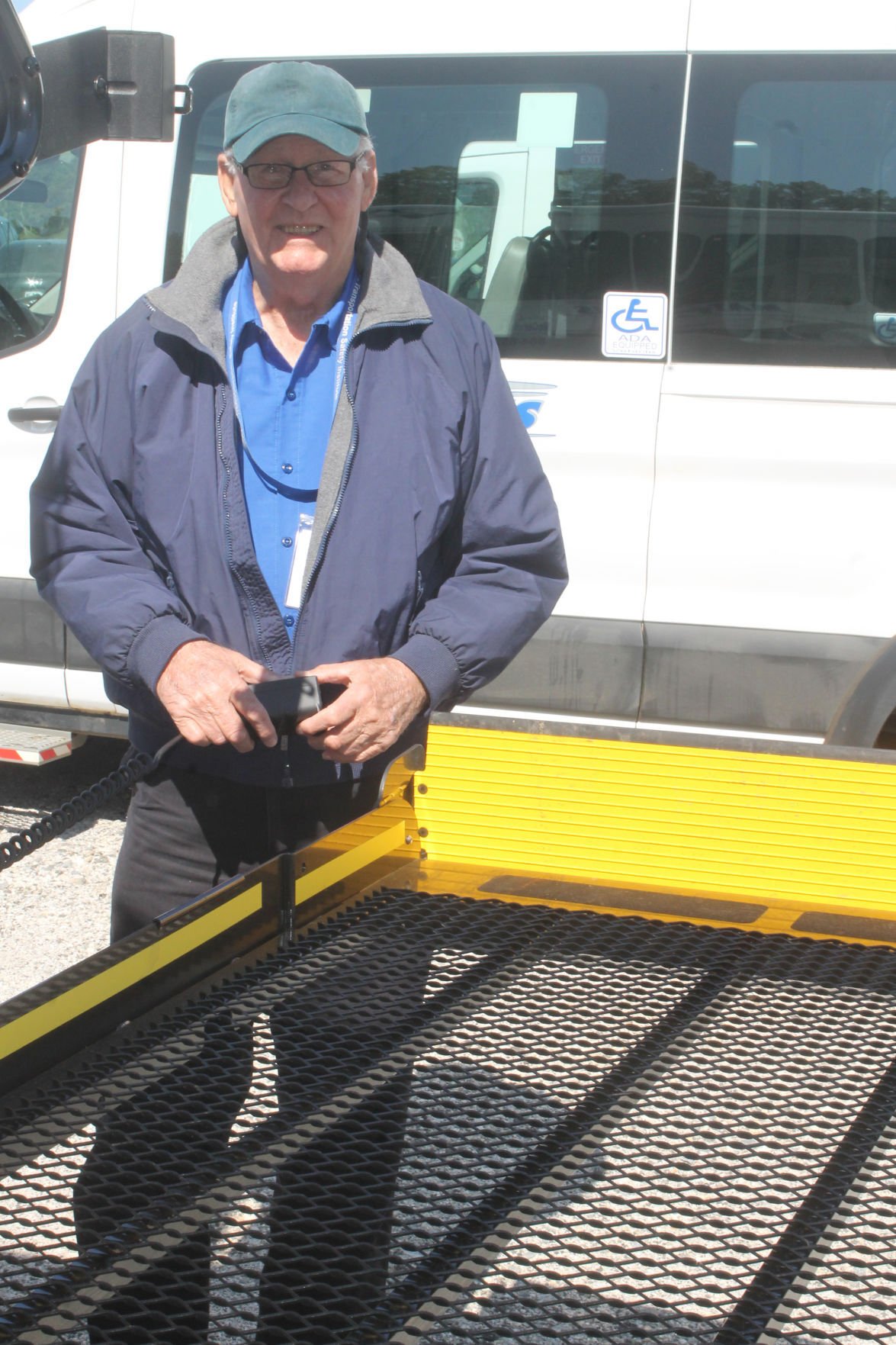 Major Hutchings tests the wheelchair ramp on one of the vehicles used by McCormick Area Transit. Hutchings has worked with the agency as a driver for nearly four years. 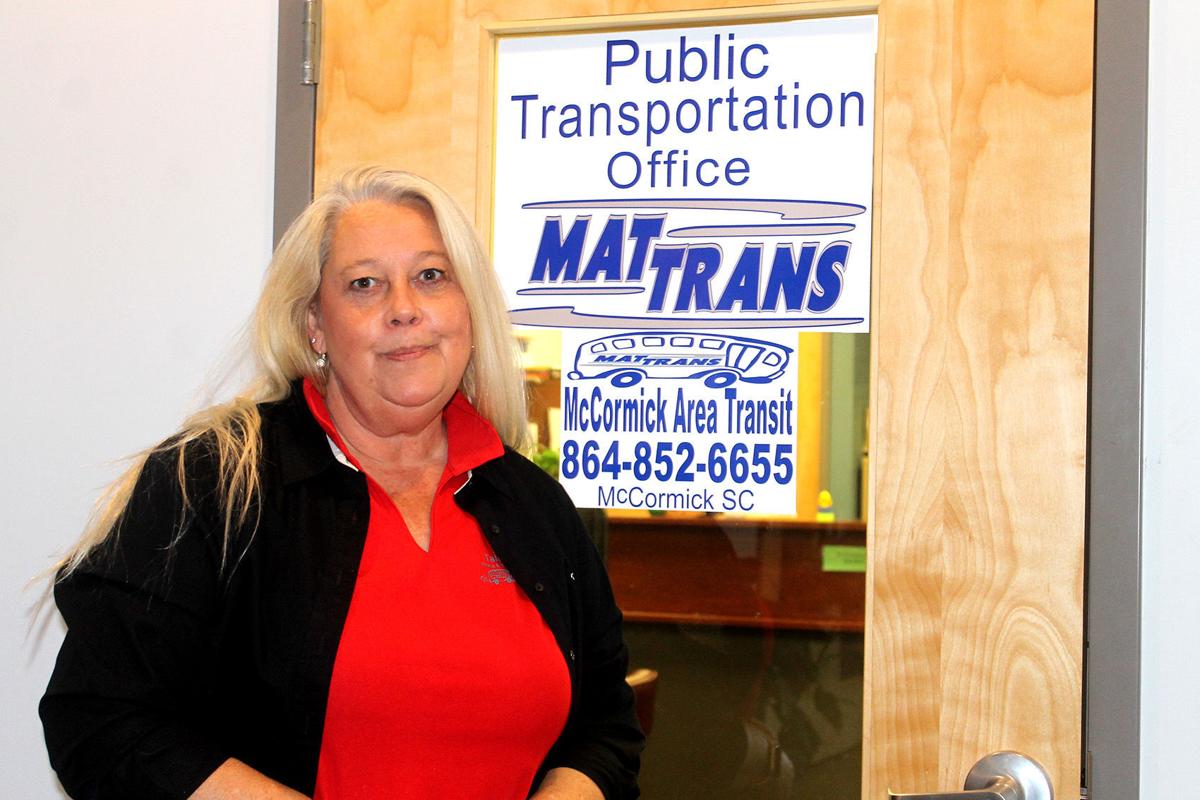 Becky Powell-Moon is the director of the McCormick Area Transit. The agency will provide some service for a transit system in Abbeville County, if funding is available. 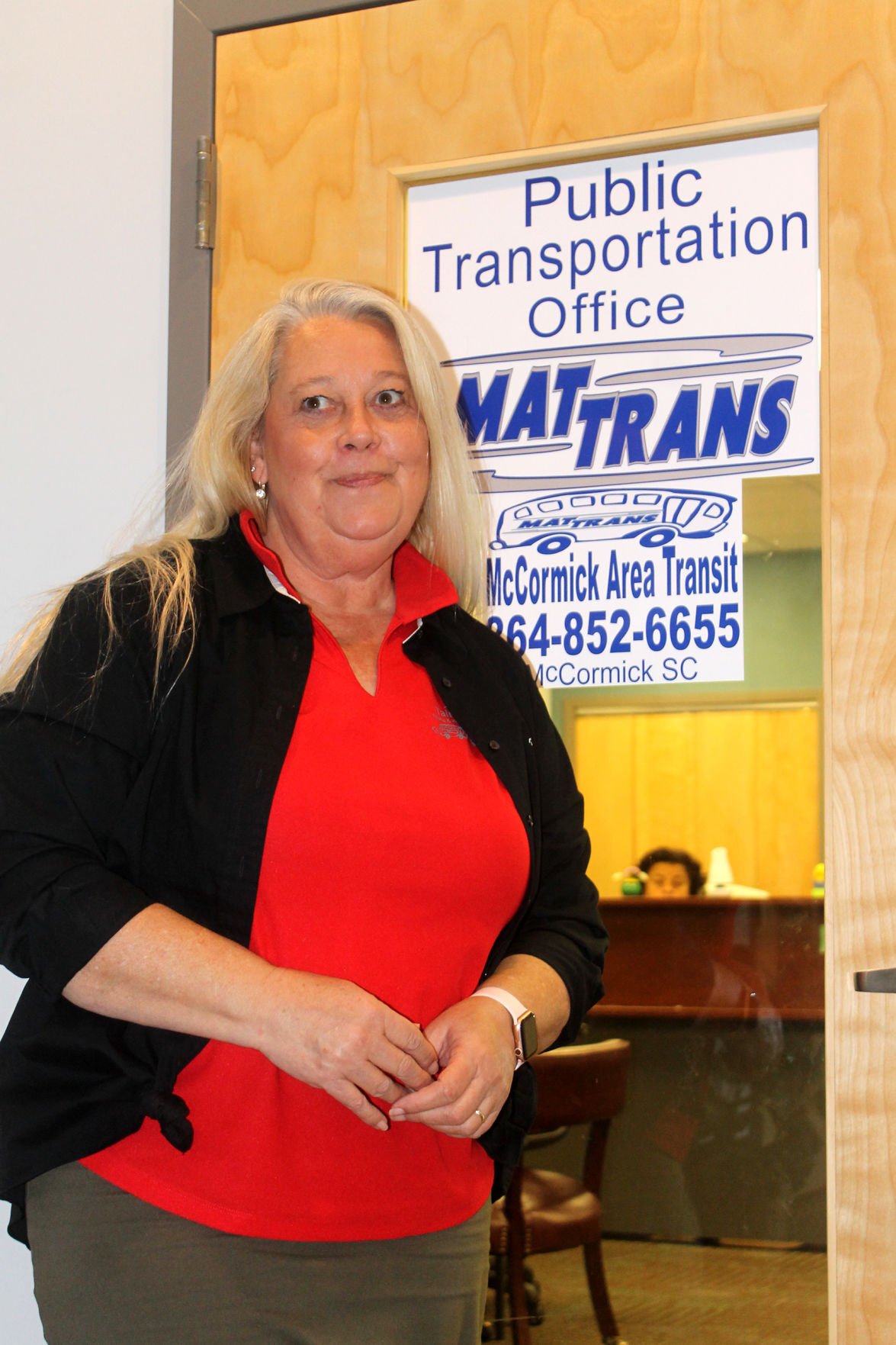 Becky Powell-Moon is director of McCormick Area Transit. Any transit system, she said, should start small. 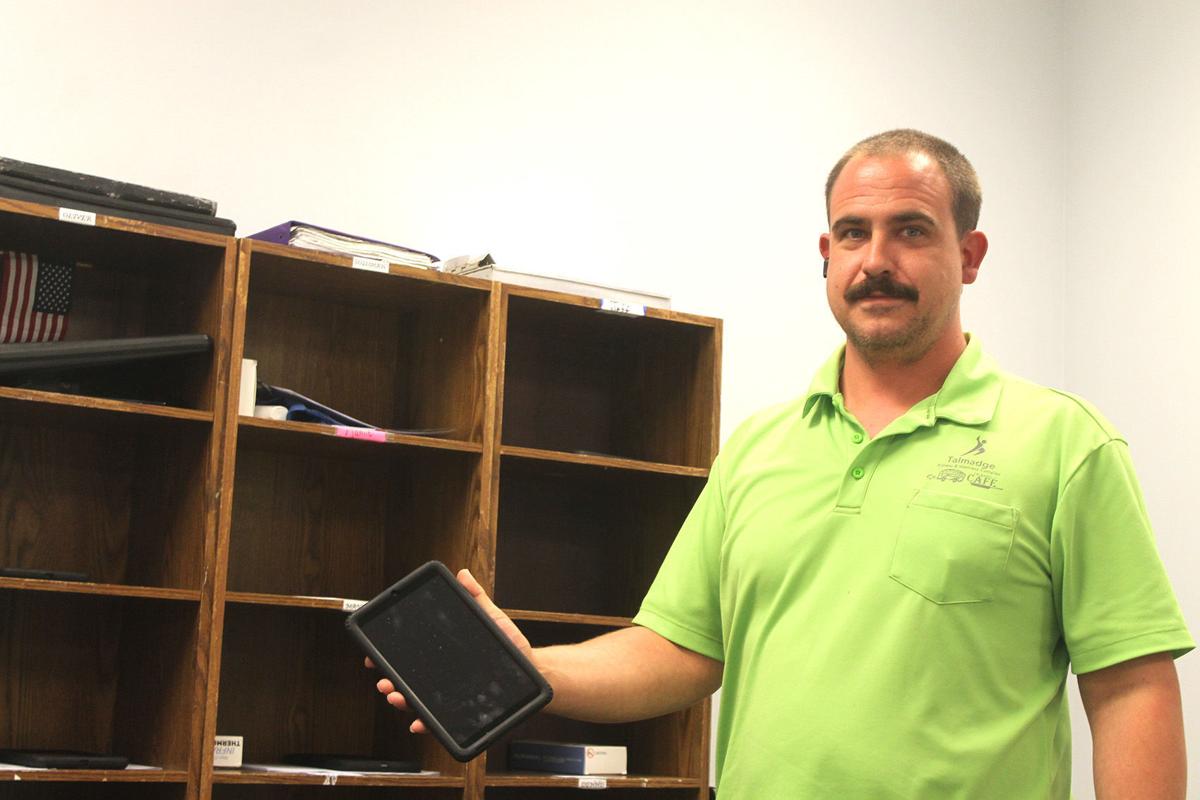 Several vehicles make up the fleet of vehicles for McCormick Area Transit from minivans to cutaway buses. All are ADA-compliant.

Major Hutchings tests the wheelchair ramp on one of the vehicles used by McCormick Area Transit. Hutchings has worked with the agency as a driver for nearly four years.

Becky Powell-Moon is the director of the McCormick Area Transit. The agency will provide some service for a transit system in Abbeville County, if funding is available.

Becky Powell-Moon is director of McCormick Area Transit. Any transit system, she said, should start small.

Nobody should go hungry.

Nobody should be sick.

Those reasons, as much as anything else, are why Abbeville County officials are discussing a transit system.

Goals for a system were presented at Abbeville County Council’s April meeting when Bill Boone, executive director of United Christian Ministries of Abbeville County. He sought the council’s backing for a resolution to enter into a contract with McCormick County Senior Center and McCormick Area Transit, or MATRANS, to develop a transit system.

The grant has been submitted, he said Tuesday. Now local officials just have to wait and see if the Federal Transit Administration likes the proposal. Word of whether Abbeville gets a grant could come as early as July.

A survey conducted by UCMAC indicated that people wanted to attend the ministry’s free medical clinic but didn’t have transportation. Other organizations throughout the county also have expressed a need for transport.

Nearly 260 responses were returned. Up to 60% of respondents live in Abbeville, 21% live in Calhoun Falls, with the rest in Iva, Lowndesville and Due West. More than half of respondents reported having problems getting to doctor’s offices and grocery stores. Up to 12% said they can’t get work because of a lack of transportation.

According to the survey, in 2015, Abbeville Area Medical Center conducted a Community Health Needs Assessment. Up to 13 organizations were asked to list critical needs for Abbeville County. Seven of them listed transportation as a critical need.

The goal is to help as many people as possible, Boone said. Focus most likely will center on providing medical transportation services, along with providing transportation to grocery stores.

Goals for the pilot program involve collecting information and seeing whether it matches the survey results, Boone said. If it does, then Abbeville can apply for a much bigger federal grant, a sustaining grant.

Once backers see how pilot program funds are spent, then they will have a better idea of how much will be needed in Abbeville, Boone said.

How everything got startedThe genesis of the idea goes beyond county lines.

Ten at the Top in Greenville formed 11 years ago as a nonprofit focused on building trust and collaboration among the 10 counties in the Upstate region, said Michael Hildebrand, director of the Upstate Mobility Alliance. Transportation is one of its focus areas.

In 2017, a growth analysis study indicated that the projected growth of the Upstate by 2040 would be up to 300,000 new residents. Because of that, Hildebrand said, people realized that they needed to start work to improve transportation and mobility.

Ten at the Top has provided assistance for several projects in the region, including Greenwood County.

It starts with talking with local leaders. Hildebrand said that Boone reached out to him last year seeking assistance on how to develop a transportation system. The result was the survey which detailed the county’s needs.

Those talks determined that McCormick County’s system would be a good place to start, he said.

“We don’t have a solution,” Hildebrand said. “We don’t come into a community and say ‘Here’s what you need to do.’ Every community is different. The goal is to bring local leaders together and help them find solutions. TATT is more of a ‘convening organization.’”

It’s local people and organizations such as the United Way, WCTEL, Abbeville Area Medical Center and other groups that have led the way, he said.

Leading the wayLeadership can come in small packages. McCormick County is one of the smallest counties in South Carolina, with 9,410 people listed in the Census estimate in 2018. Yet, officials in both Greenwood and Abbeville counties have contacted officials in McCormick County to determine how to create a transportation system.

The system started with a couple of vehicles and drivers. Now MATRANS has more than 20 vehicles including minivans, cutaways (small buses) and four larger vans, all of them ADA-compliant, she said.

MATRANS employs 13 people as drivers. Powell-Moon said routes can start as early as 4:45 a.m., with most appointments starting around 6 a.m. Drop-offs can be as late as 7:30 p.m., although most drivers are done by 6:30 p.m.

It’s a demand-response system, she said. MATRANS receives calls from people requesting a ride and puts them in the schedule. Drivers pick people up at their homes and drop them off and continue pickups. Then drivers return to pick people up and drive them back home.

Fees vary depending on where riders want to go. A roundtrip in McCormick County is about $2-3; $7 for trips to Greenwood and Abbeville; and $14 for a trip to Augusta, Powell-Moon said.

At first, MATRANS’ primary goal was to give people essential access for shopping and medical visits. Since then, services have expanded to transport people to schools, to jobs, make visits, anything to meet their needs.

Before COVID-19 hit, ridership was around 20,000 trips per year, which is very good considering the county’s small population, Powell-Moon said.

Working with McCormick will be helpful, Boone said.

“I’m excited about working with McCormick because they’ve gotten through some of the rough times; they’ve got a handle on this,” he said.

How much will it cost?Expense is a question on everyone’s mind.

Boone said any program will likely need assistance for some time to work. If the program gets a grant, supporters would try to review numbers every quarter to determine ridership.

Starting a system will be expensive, Hildebrand said. A system will need vehicles, drivers and routes must be designed.

As a general rule, transportation services are not self-sustaining just on what riders pay, he said. Exceptions are Uber and Lyft programs, which can cost much more than a public transit system. Hildebrand said he has heard of people paying $20-$30 for a one-way trip. That’s why state and federal funds can help cover costs.

MATRANS partners with the S.C. Department of Transportation and has received federal funding such as a 5311, Powell-Moon said. It also partners with state and local contracts to stay afloat.

The only way to keep it going is to keep bringing in additional contracts for transportation services, she said. A grocery store might be a supporter since a transit system could send people there; hospitals will see more people who visit with a transit system.

5311 funding is not a blank check. Regions will have to provide matching funds to be able to draw on state and federal funds, Powell-Moon said. That means you have to raise funds and seek corporate donations.

If people have the ability to shop, dine or receive health care locally, “it supports your own county, it supports the city you live in,” Powell-Moon said.

“If you invest in it, you’re investing in your community.”

Once you get a systemAssuming funding is available, backers have to determine what kind of transit system is viable. McCormick County uses a demand-response system. Such a system might be used in Abbeville.

‘When you talk about a rural community, there’s not a lot of sidewalks and people are more spread out,” Hildebrand said. “Those are communities that are designed for people who have cars.”

Running a service that has specific stops on a route isn’t likely to be efficient, he said.

Then again, a transit system will have to convince people to use it, Hildebrand said.

“If a person is used to getting in a car whenever they want and driving where they want, a transit service can be kind of frustrating,” he said. “It’s a change in mindset. You might have to leave a house 30 minutes early or get back home 30 minutes later.”

Even after years of service in McCormick County, some people believe it is a system geared to serve senior citizens or they don’t know it exists, Powell-Moon said. It’s a sentiment shared by Josh Bentley, the associate director with MATRANS. The system is available to all residents, they said.

Bentley was a child when public transit arrived. He recalled thinking it was a system for old people. That thinking was wrong then and it’s wrong now, he said.

In some cases, it’s all about pride, Powell-Moon said. Some people don’t want to be dependent on others.

Transit systems give freedom and mobility, she said. It gives you access to meet your needs. A lot of people use it to get t work.

She and Bentley agreed that MATRANS keeps people in their homes. Bentley spoke of a couple who are dealing with health problems. They said without MATRANS, they might have to live in an assisted living facility.

“I think it will be a benefit for Abbeville and look forward to seeing how this works,” Hildebrand said. “I really think it’s going to be good for some people; it will be life-changing.”

Several people in the Upstate region are working on transportation issues. They include:

The Latest: Mickelson loses his way at US Open with a 76

Six years ago he was fleeing war.This year he is competing at the Olympics