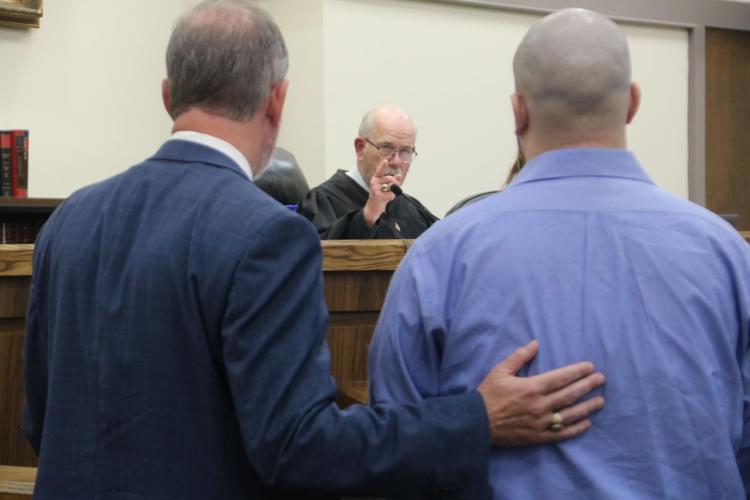 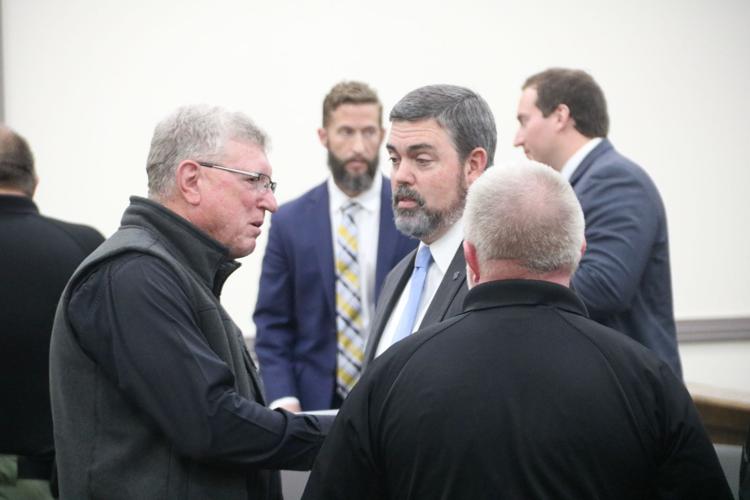 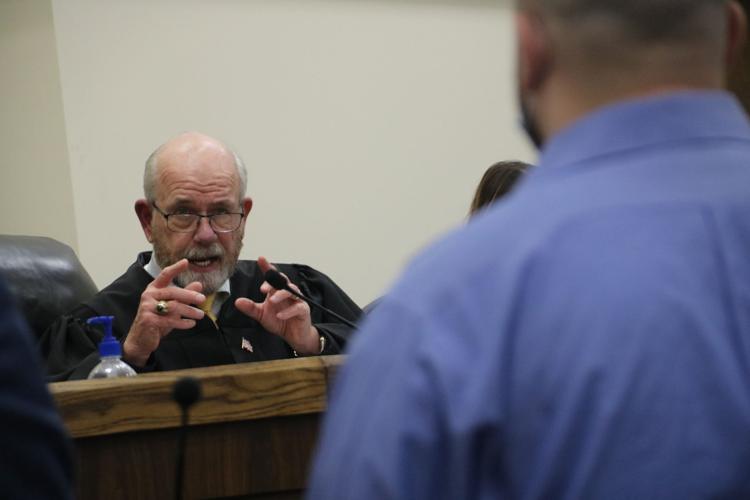 Circuit Court Judge Donald Hocker said he hopes William Looper will find the faith to withstand a lifetime in prison, his sentence in connection with abusing and killing 2-year-old Brantley Smith. 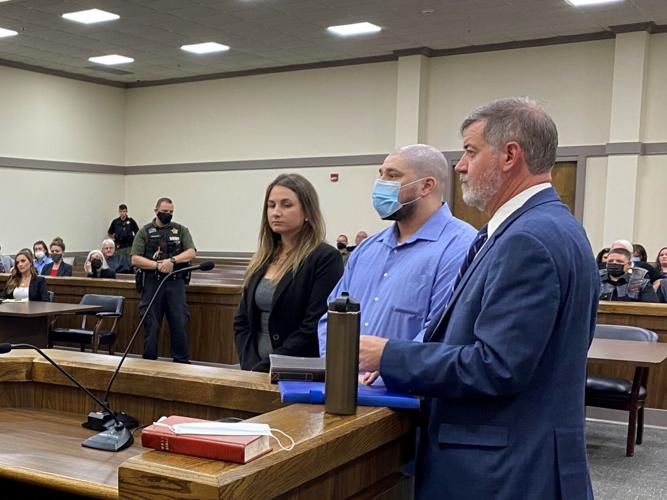 William Looper stands before a judge Thursday to plead guilty to murdering a 2-year-old boy. Beside him are his attorneys, 8th Circuit Public Defender Chelsea McNeill, left, and S. Boyd Young.

Circuit Court Judge Donald Hocker said he hopes William Looper will find the faith to withstand a lifetime in prison, his sentence in connection with abusing and killing 2-year-old Brantley Smith.

William Looper stands before a judge Thursday to plead guilty to murdering a 2-year-old boy. Beside him are his attorneys, 8th Circuit Public Defender Chelsea McNeill, left, and S. Boyd Young.

LAURENS — Cuffed to a waist chain, William Looper faced a judge Thursday evening, his back to the family still grieving the loss of the child he killed.

In the early hours of June 30, 2018, Laurens County deputies rushed to 176 Country Lane to investigate an unresponsive child.

“What they found was nothing short of horrific,” 8th Circuit Solicitor David Stumbo said. “They find his broken, battered body on the bed.”

The body of 2-year-old Brantley Justin Smith lay lifeless on the bed. A dog was on the bed beside his body, protecting the child from the strangers entering the house. Once deputies secured the dog, EMS tried but failed to resuscitate Brantley, who appeared to have died some time before, Stumbo said.

Brantley’s two brothers, 8-year-old Bobby and 6-year-old Brian, were taken to safety by Department of Social Services staff. They would go on to tell investigators about Looper punching their 2-year-old brother. They described to officers how Brantley was swung by his feet against a wall. They heard his screams through the night as he was killed.

In court Thursday, Looper contested some elements of what Stumbo said as the state’s case against him. His attorney, 8th Circuit Chief Public Defender Chelsea McNeill, said that he never swung Brantley by his feet. The two other children were not in the room when he fatally assaulted Brantley either, he contested. He never punched the boys, but did use a belt on them, McNeill said.

An autopsy found Brantley had fractured ribs, bite marks on his body and signs of sexual trauma along with bruising to his torso. Looper didn’t say much the morning of his arrest, but in ensuing interviews with deputies, he admitted to assaulting Brantley.

Brantley’s mother, Jessica Blake Smith, was working a shift at Walmart the night before her son’s death. Looper isn’t Brantley’s father, and he and Smith had gotten together weeks prior. She got off from work at midnight and had been away from home for most of the abuse, Stumbo said.

Looper, 30, was charged with murder, first-degree criminal sexual conduct with a minor and two counts of unlawful neglect of a child. He pleaded guilty on all charges in a negotiated plea deal with the solicitor’s office — Looper was facing the death penalty in this case, but the plea negotiated his sentence to life in prison.

Circuit Court Judge Donald Hocker also sentenced Looper to 60 years behind bars on the criminal sexual conduct charge and 10 years each on the unlawful neglect charges, all to be served concurrently. Looper has no possibility for parole.

Before sentencing, Hocker hoped aloud for peace for the grieving family, and that Looper will find the faith needed to withstand a life behind bars.

“I hope that the two brothers will receive all the necessary treatment they need, that they may one day overcome what they experienced in their very young lives,” Hocker said.

Smith, 30, was charged with homicide by child abuse and two counts of unlawful neglect of a child. Her case is still pending.

“This case has been going on for over three years. It’s probably one of the hardest nights the sheriff and his people have had to deal with,” Stumbo said.

Stumbo said he felt the death penalty was still appropriate in this case, but agreed to withdraw the request for the death penalty in the plea deal in the hopes of finding a “more complete” justice. Looper discussed with investigators allegations of abuse he and his two brothers received as children at the hands of his father, William Harold Looper III.

Looper III, 51, of 229 E. Butler Road was arrested Monday and charged with second-degree criminal sexual conduct with a minor, three counts of unlawful neglect of a child, a charge of committing or attempting a lewd act on a child, buggery and three counts of disseminating harmful material to minors.

The case against the senior Looper is still under investigation, and the Laurens County Sheriff’s Office did not release any report detailing his arrest. Stumbo said he could not talk more about the case since his office will be handling his prosecution.

HeartacheCheryl Fowler’s leg bounced throughout Thursday’s plea hearing. She sat along the front bench, watching Looper face the consequences of killing her grandson.

Diane Smith, a friend of the family, read a statement aloud in court on behalf of Fowler and her husband, Bobby. They took in Brantley’s two older brothers after his death and their mother’s arrest. Both boys have been receiving inpatient care for the trauma they endured — the oldest brother was in court Thursday but had to step out at times.

“To say our world was turned upside-down is an understatement,” Smith said. “We have no idea the horrors that Bobby and Brian endured and witnessed in their own home, but we know that they will never be the same after what they had to see and endure at the hands of Billy Looper.”

Smith said the family hopes Looper’s sentence will bring some form of closure, and that they can honor Brantley’s memory moving forward.

Looper told the judge he was sorry for his actions, but knew apologies wouldn’t bring Brantley back.

“I can’t say enough to make it right, that will never be possible, but I do apologize sincerely from my heart for the hell that I caused them and drove their family through,” he said.

Looper said it was also stressful for him to live with his actions, and that his heart ached for what he put Brantley through.

“Billy has shown an incredible amount of remorse over the past three years,” McNeill said. “We appreciate very much from the state and from the family the mercy that you’re showing here today.”

Brantley’s family didn’t want to speak to media following the hearing. Stumbo said it has been a horrific journey for them, and that the plea avoided what would have been a weekslong trial with Brantley’s brothers as witnesses.

A picture of Brantley hung in the solicitor’s office, Stumbo said, to remind him of what this case was really about. He said he saw the horror of Brantley’s death on the faces of the investigators who worked this case and looking at crime scene photos brought that nightmare home for prosecutors every time.

“All too often, they deal with the worst of the worst,” Laurens County Sheriff Don Reynolds said of his officers. “They have to put their emotions in their pockets.”

Stumbo said he’s worked child abuse cases for almost 18 years and it’s always challenging to prosecute these cases as a parent. Several officers who worked Brantley’s case sought counseling after what they saw and heard. Reynolds said officers face trauma daily, and while it’s never easy they find ways to process it.

This case was about ending a cycle of abuse, Stumbo said. Although he believes Looper still deserved the death sentence, he said the plea agreement gave Looper the chance to testify about abuse he received as a child, which led to the charges against his father. While the younger Looper was sentenced to life in prison, the elder Looper is being held at the Laurens County jail after being denied bond on his nine charges.

Caring for plants an ‘obsession’ for Alston Award winner Coffey

TAKE A LOOK AT THIS WEEK!

2 pulled from the water in Jamaica Bay, Queens

Mystery wolfman-like creature spotted near Texas zoo, and officials can't figure out what it is