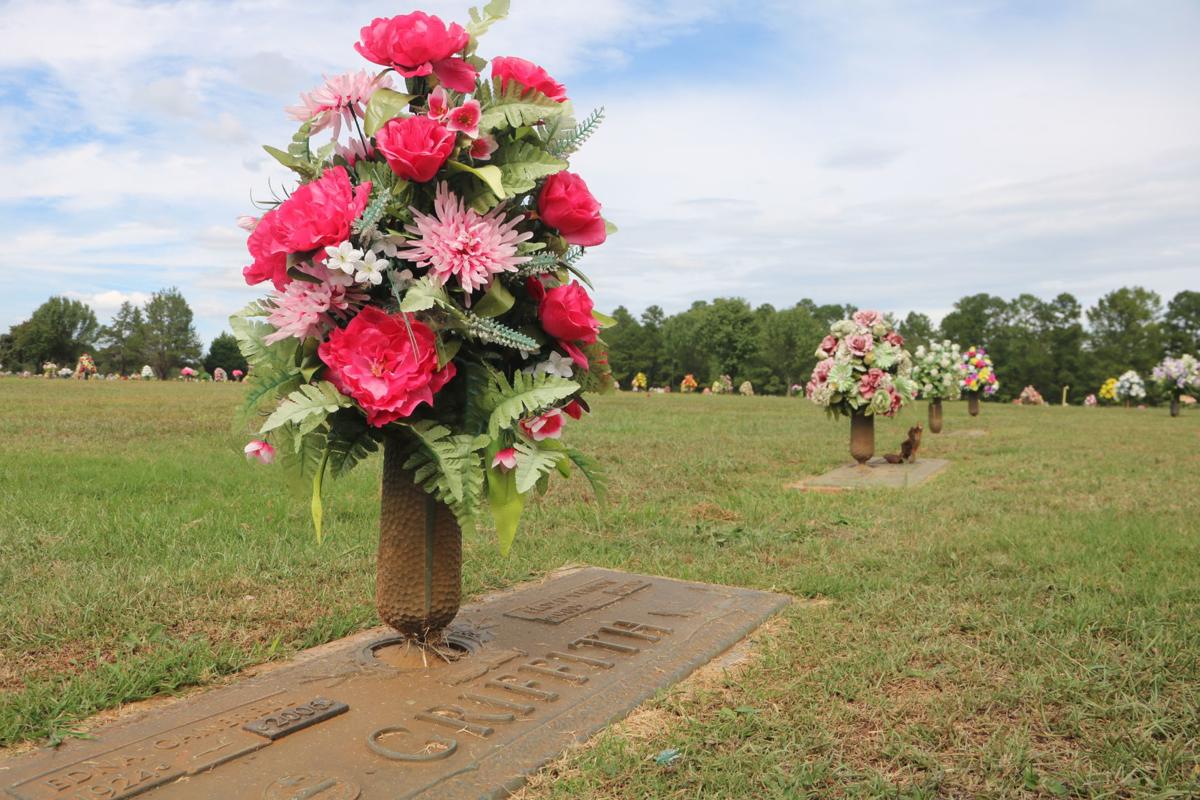 The theft of dozens of brass vases from Greenwood Memorial Gardens has left families seeking answers while three men are facing charges in connection with the stolen items. 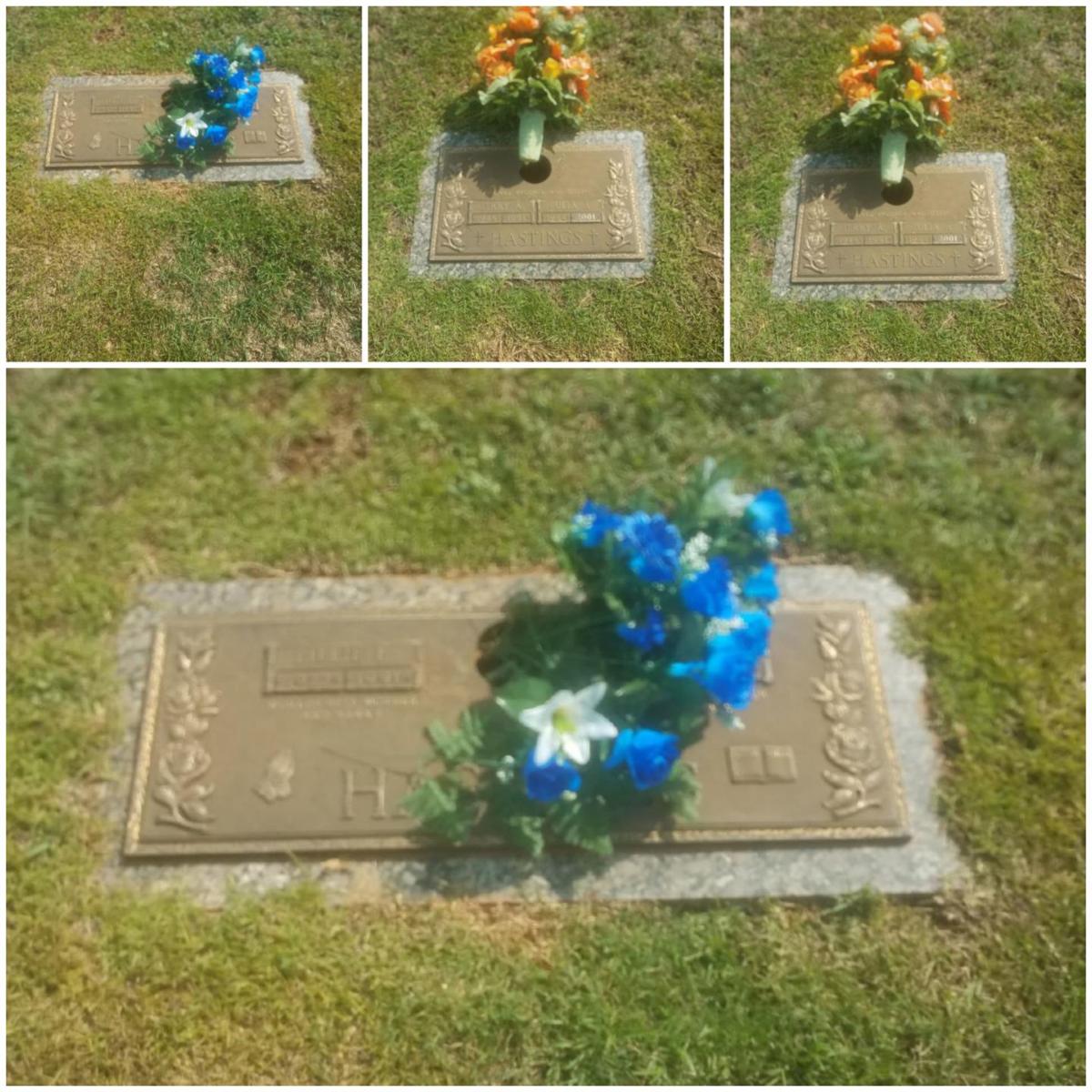 Stephen Turner said his family was shocked when they found that the vases left at relatives’ grave markers at Greenwood Memorial Gardens had been taken and the flowers left strewn on the ground.

The theft of dozens of brass vases from Greenwood Memorial Gardens has left families seeking answers while three men are facing charges in connection with the stolen items.

Stephen Turner said his family was shocked when they found that the vases left at relatives’ grave markers at Greenwood Memorial Gardens had been taken and the flowers left strewn on the ground.

A vibrant bouquet of blue and white flowers sat nestled in a brass vase on the gravestone of Julia Hastings — Stephen Turner said his brother had put the flowers out for their mom.

She isn’t the only relative they have buried at Greenwood Memorial Gardens. Turner said he has an uncle and two grandparents there as well, relatives his family visits regularly. During a recent visit, though, he said the serenity of their resting places had been disturbed.

“It was pretty devastating when someone steals something off your family’s grave,” Turner said. “The vase had been taken and the flowers were just lying there thrown around.”

Thieves had stolen the vase, and Turner’s family wasn’t the only one affected. To date, nearly 70 vases have been counted as stolen in this case, according to Sgt. Jeff Graham with the Greenwood County Sheriff’s Office. Dozens of families have reported the vases they got to honor their relatives had been stolen.

“We patrol the cemetery from time to time,” said Gary Blyth, general manager at Greenwood Memorial Gardens. “I noticed three or four vases in a row just piled up and I knew my guys wouldn’t do that.”

Blyth said it’s not unusual to find the occasional vase missing, and small-time vandalism happens from time to time, but finding 20-30 vases missing at once is a strong cause for concern.

He started by calling law enforcement, then calling local scrapyards to see if anyone had tried selling the metal. Cemetery staff put up trail cameras to hopefully catch any returning thieves. Over the course of his inventory, Blyth said he found more than 100 vases had been taken from Greenwood Memorial Gardens.

“It’s devastating for the families, of course,” he said. “The people that steal these things don’t realize the emotional connections people have to these memorial sites.”

In 30 years in his business, Blyth said he’s never run into vandalism and theft on this scale.

“Our hearts go out to the families too,” he said. “This is a business, yes, but it’s a personal business.”

On Aug. 13, deputies received a call from an employee at C&C Metal Recycling, and officers learned about a group of men who came in and sold brass items that looked like cemetery vases. The vases had been burned and broken apart in an apparent attempt to hide what they were, deputies noted in a report.

An employee at C&C was able to identify the man who sold the metal, and after investigating further leads officers were able to arrest three people in connection with the stolen vases. Two of the men admitted to deputies they had been to C&C, but denied taking the vases. Officers found more vases in the inside and in the backyard of the house the men were found at, the report said.

As of a recent count from the sheriff’s office, Graham said about 243 pounds of these vases had been sold to C&C.

Blyth said the cemetery’s fund to ensure perpetual care of the site doesn’t cover theft, so he said he’s reached out to the families whose plots at Greenwood Memorial Gardens were affected and has been trying to help them with next steps.

He said anyone who had their vase stolen should come by the cemetery office to get a copy of the latest sheriff’s office report and present that report to their own homeowner’s insurance company, which he said often covers damaged or vandalized headstones or grave markers.

The sheriff’s office is continuing to update the case report as more families come forward with word of stolen vases, and Graham said a deputy has been regularly delivering updated reports to Blyth so that he can provide copies to the families.

Still, it’s been a confusing time for Turner and some of the other people whose relatives’ vases were stolen. When Turner was asked what he would say to the people responsible for these thefts, he was nearly at a loss for words.

“That you couldn’t put in the paper,” he said.

Flowers beside a loved one’s grave can help ease the grief, but not when those vases are being stolen.