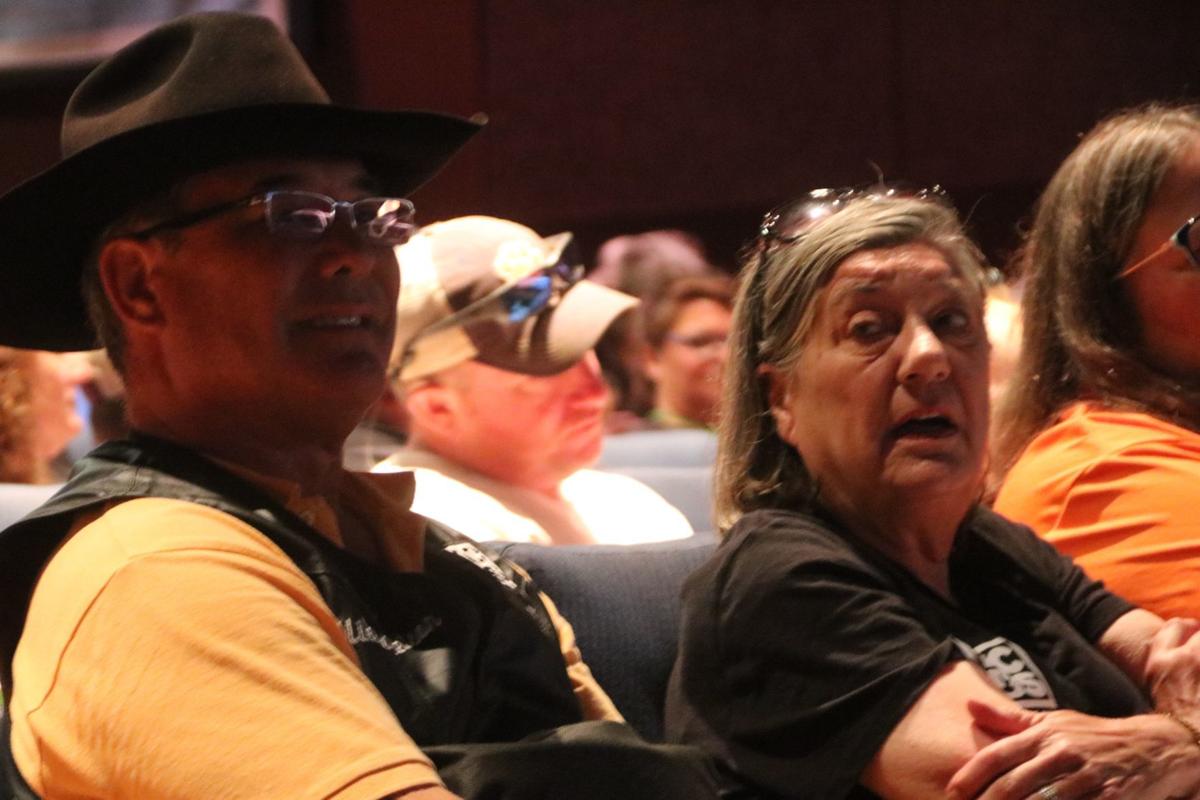 KCBS Executive Director and co-founder Carolyn Wells sat in the front row Saturday for the S.C. Festival of Discovery’s awards ceremony, clapping for each of the teams that took home a prize. 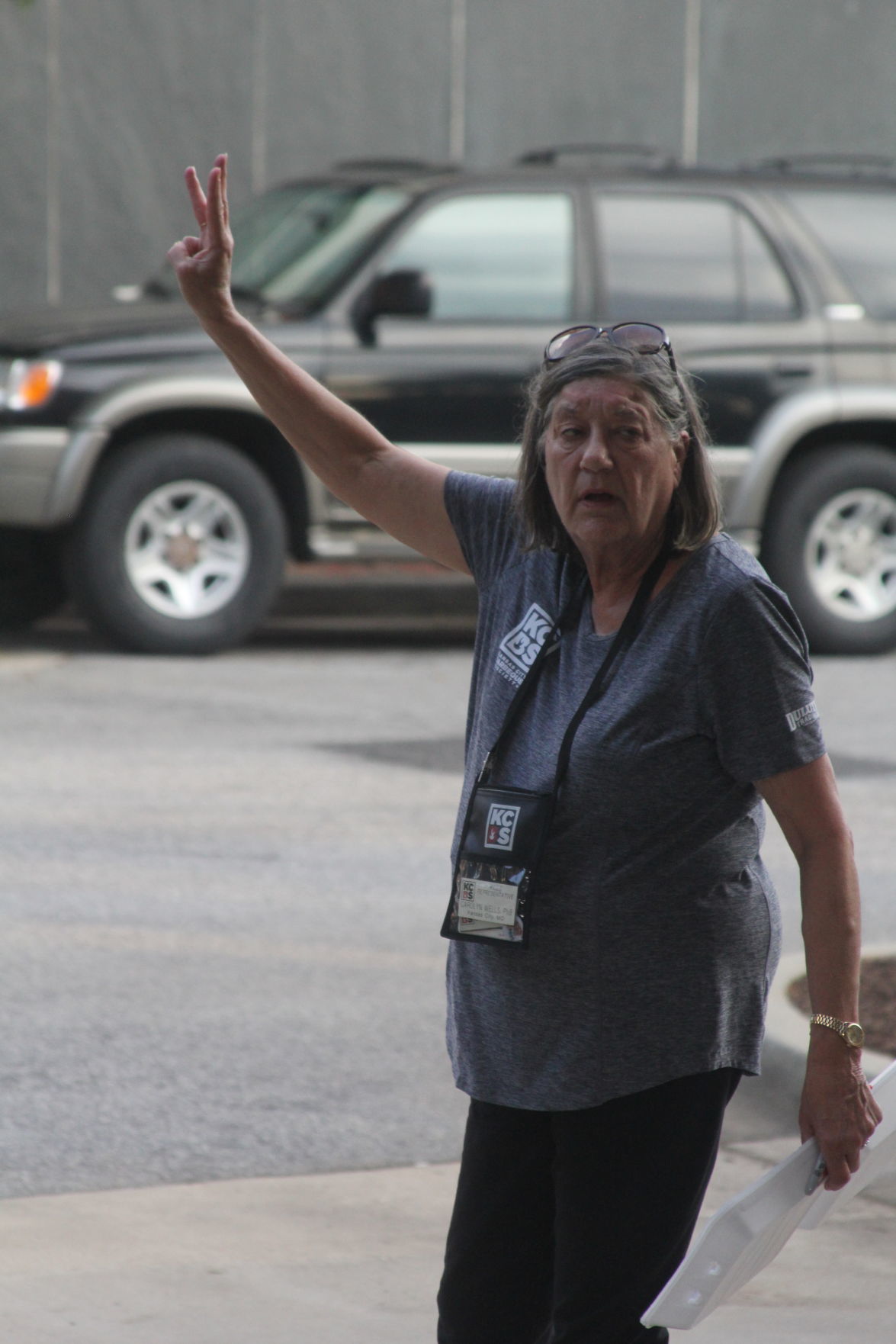 Carolyn Wells, the first lady of barbecue, founded the Kansas City Barbeque Society in 1986 alongside her husband Gary Wells and Rick Welch. 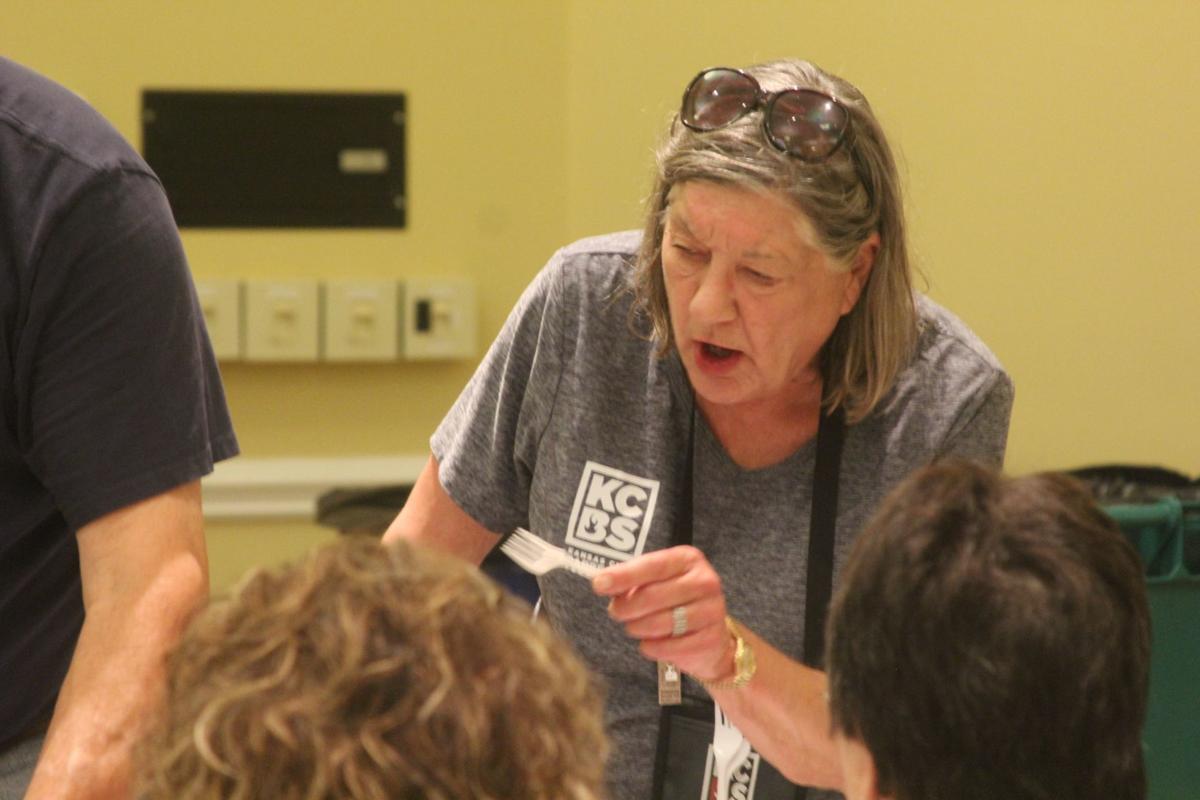 With more than 450 contests annually in the United States, KCBS Executive Director Carolyn Wells can’t make it to all of them — but for the past few years she’s made it a point to come to Greenwood.

KCBS Executive Director and co-founder Carolyn Wells sat in the front row Saturday for the S.C. Festival of Discovery’s awards ceremony, clapping for each of the teams that took home a prize.

Carolyn Wells, the first lady of barbecue, founded the Kansas City Barbeque Society in 1986 alongside her husband Gary Wells and Rick Welch.

With more than 450 contests annually in the United States, KCBS Executive Director Carolyn Wells can’t make it to all of them — but for the past few years she’s made it a point to come to Greenwood.

Carolyn Wells is the first lady of barbecue — alongside her late husband Gary Wells and friend Rick Welch, the three founded the Kansas City Barbeque Society in 1986. Now she serves as the executive director of the organization, which has grown to more than 19,000 members, more than 22,000 barbecue judges and more than 450 annual contests in the United States, according to the Barbecue Hall of Fame.

Of those 450 contests, she’s made it a point for the past several years to attend the S.C. Festival of Discovery personally.

“I don’t know if she had envisioned it being this big, just how many people around the world it touches,” said contest representative Rusty Cook on Saturday.

Doug Reid, another contest rep, said Wells has always been a personable and loving person who’s generous with her time and always passionate about barbecue contests.

Fellow contest rep Mike Garretson remembered how he got his start as a judge, and the help Wells offered him.

“It was 23 years ago, I was invited to a barbecue contest. Carolyn said ‘Do you like barbecue?’ I told her I’d love to judge, but I don’t know how,” Garretson said.

On the spot, she gave Garretson a crash course in tasting barbecue.

“She was telling me about the appearance when it comes in — what’s called the wow factor,” he said. “When you open the entries up, there are just one or two that hit you and, you know, make you say wow. Those are the ones you want to eat first, and those are likely your nines.”

She taught him to test tenderness on ribs: A bite from the rib should pull the meat away cleanly where the teeth landed, but if all the meat around your teeth also comes off then it might be too soft.

On Saturday, as judges got ready to taste and score the entries for the S.C. Festival of Discovery, the Index-Journal had a few minutes to talk with Wells in the courtyard of the Arts Center building.

Carolyn WellsQ: KCBS in the U.S. alone has 450+ competitions a year, how many do you choose to attend?

A: I do about 15-20 contests a year. I don’t rep at all of them, but I might fill in on a special project and I support the organization in any way I can at trade shows and with other sanctioning organizations because we’re all friends. We’re friendly competitors, but we all know we can cook under anybody’s system as long as it’s fairly adjudicated.

Q: How many years have you been coming to the Festival of Discovery, and what about this contest makes you pick us?

A: This is a very, very special contest. Not only is it a tier-1 contest, you know it’s over 50 teams, but these people get it. They’ve figured out a system that works. Every contest has its own flavor, if you will, but eventually, organizers will settle, hopefully, on a system that works. I’m not talking about the sanctioning system, because we know how to do that and that’s our job, but on the various factors in their community that make for a successful event. This one is based on barbecue and blues — it’s a natural to me. And you’ve got a strong contingency of both of those items, and more than anything else, you’ve got a community that’s willing to support it and embrace it even though let’s say it sometimes hinders some of the merchants, but they support it anyway. It ups their business, so it’s a win-win for everybody. If you don’t figure that out, it’s gonna go away — and you’re not in any danger of that, that I can see. I love this contest because the city supports it, the merchants support it, it’s a beautiful town. I love the topiaries, and the people are so friendly. Being a daughter of the South, I come back to the South whenever I can, but this is just a very, very special place.

Q: What are some of the ingredients in the secret recipe to a successful barbecue competition?

A: Unfortunately, sponsorship is a major component, because you can’t count on entry fees to pay the prize purse. We’re in the trust business more than the barbecue business, because we have a system that works. It’s a fairly simple system, not that everybody isn’t trying to pick at it from time to time, but it has worked 10,000 times, let’s say, in 30 years. So we’ve got our part down. Again, it’s the community involvement, it’s the willingness to delegate and let people do what their volunteer job is, so you’ve got community, you’ve got volunteerism, you’ve got sponsorship, you’ve got facilities. We know what barbecue people need is space, power and water. Real estate. So that’s relatively simple, although not inexpensive, to provide — especially the electricity. Then it’s up to the organizer to figure out what’s going to draw the pubic in, and it’s universally against health department laws for people to sample from amongst the competitors, so having vendors is a really great way because a lot of these vendors are competitors as well. You’ve got crafts, you’ve got a wonderful art facility here, you’ve got great blues music and having all that available, the teams even like it — they go clubbing too after they’re done working at night. And great restaurants; we plan our Saturday night meal on Thursday, so we’re supporting local economy as well.

Q: What are some of the trends and changes in the barbecue industry and barbecue festivals that really excite you?

A: Number one, we’re adding some grilling components. Not to the regular barbecue contest but as an ancillary. You’ve got desserts here, Anything But, you’ve got hash. Great Kids Que, and those kids are just so darling — love every one of them, and they’re our cookers of the future. Food sports is growing exponentially. We go to events that are food-centric, so it could be an Iron Chef-type thing, anything where you can get the public involved watching and challenging the cookers as a side game, if you will. Those things are getting very popular. And then, of course, our growth internationally has just been, well, a delight, because those people want to be able to cook as good as we do here in America. Love it, it’s the only food group that’s perfected here in America. It is America’s cuisine, and it’s every man’s food. ... In the 34, longer than that, but in the 34 years of KCBS, the most beautiful thing is watching barbecue turn from a second-class food into the hot, new “old food.” Just does your heart good.

Q: Where do you still see room for growth in KCBS and the barbecue community as a whole?

A: I see growth as being more inclusive. Again, it’s part of food sports, so there’s any number of ways. We have Kids Que, so that’s growing. We have ancillaries, that’s growing. We’re now doing special events, like for the turkey federation. We’re doing some special events for spirits where we’re permitted, and in a limited form. Allowing creativity so the outdoor cooking phenomenon can extend to anything from tailgating to collegiate to professional sport and sporting events, because they’re the same demographics. Everybody’s welcome — well, almost everybody. We don’t have much to offer vegetarians, but we’re real big on proteins. I mean there are some places where you might be able to do a tofu burger, but I don’t think it’s here. We can’t please everybody. And you know, these are the best people in the world. They’re terribly passionate about barbecue and they’re all striving to top their personal bests. But you know when awards time comes, they’re all clapping for whoever did win. The spirit of barbecue has grown into so many cottage industries, like when we started out it was pup tents and kettle cookers. It’s now motor homes and mobile kitchens, but we’ve added bells and whistles like barbecue guru, thermostatically controlled devices, remote thermometers, sauces, rubs and marinades. People have gone into catering, they’ve opened up barbecue shops or stores or joints, whatever you want to call them. BBQ has even become a team-building exercise for some Fortune 500 companies, so what’s not to love about it? It’s a great pastime.

Nadal keeps it simple in chaotic 3rd round at Aussie Open

John Rosemond: How far is too far?

Deputy back at work after SLED investigation clears him