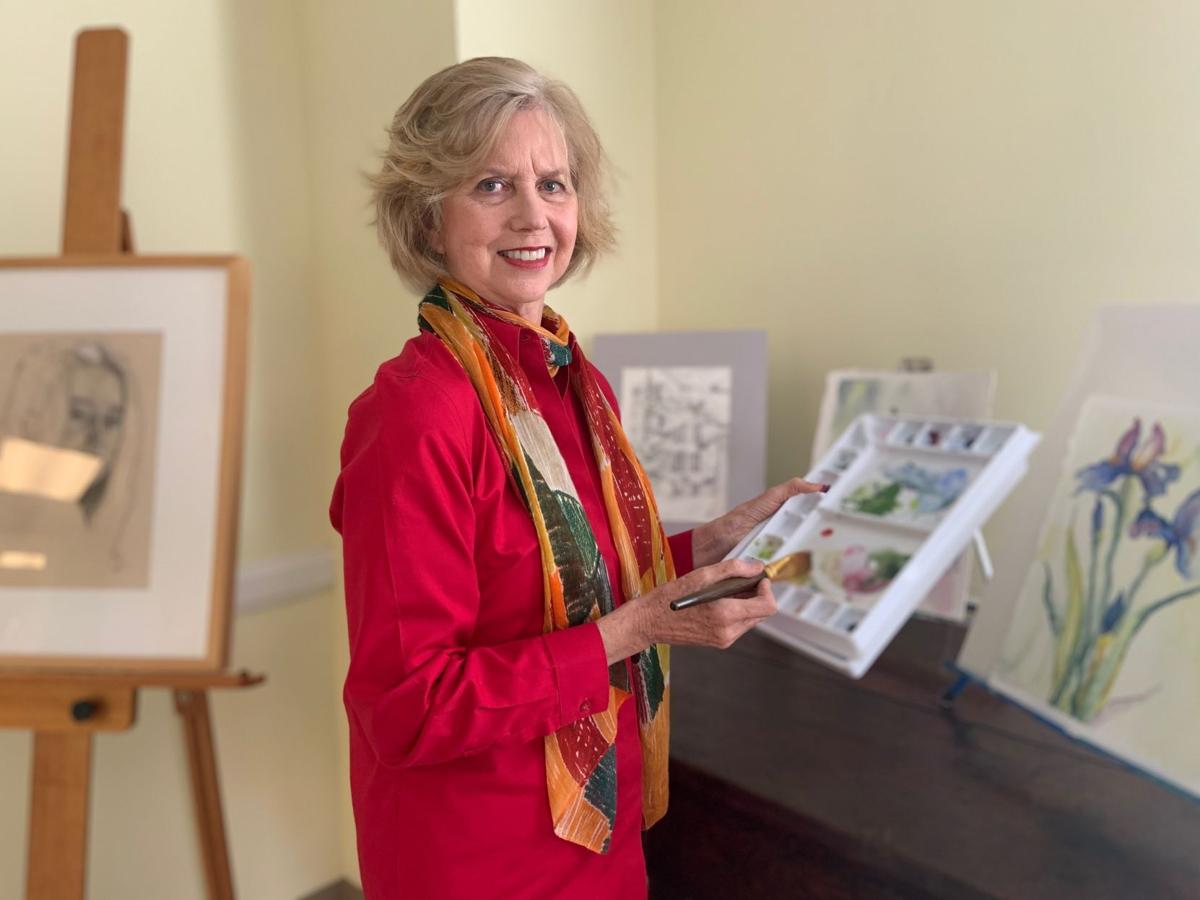 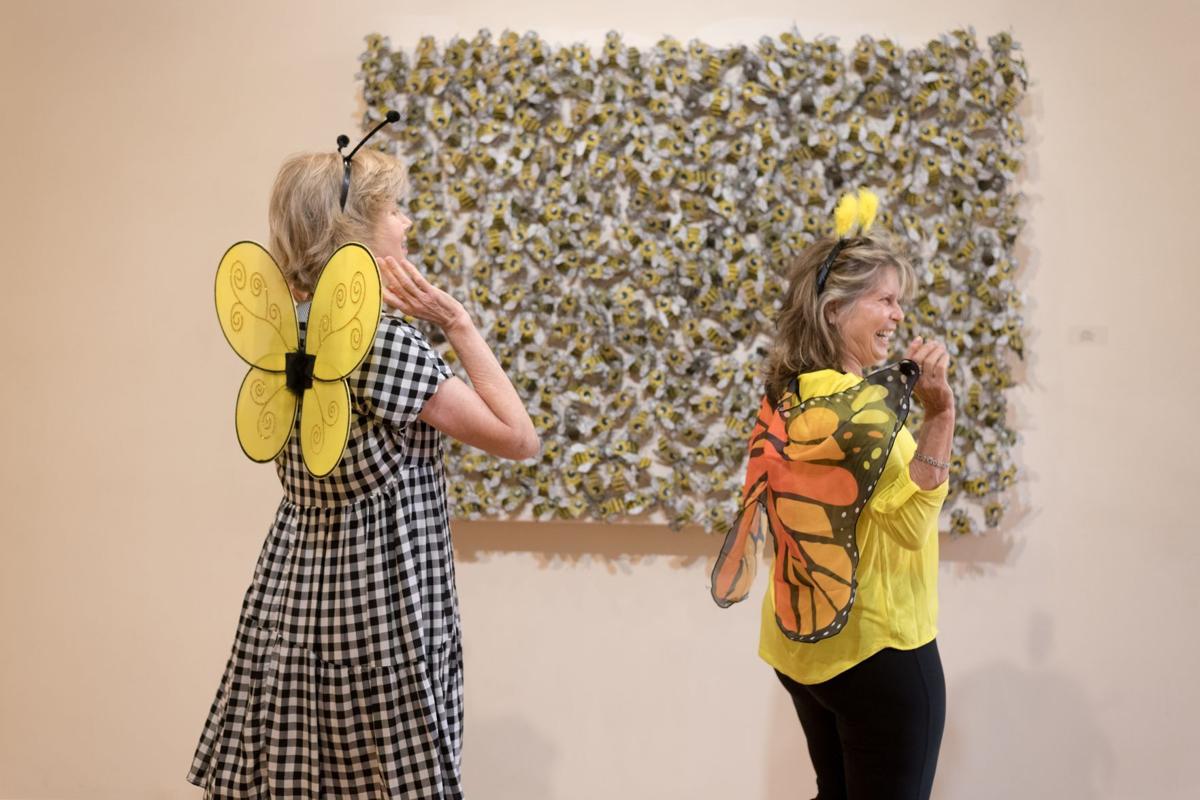 Anne Craig, left, and Glenda Horton have a little fun during the Arts Center of Greenwood's pollinator-themed exhibit in the summer of 2018. 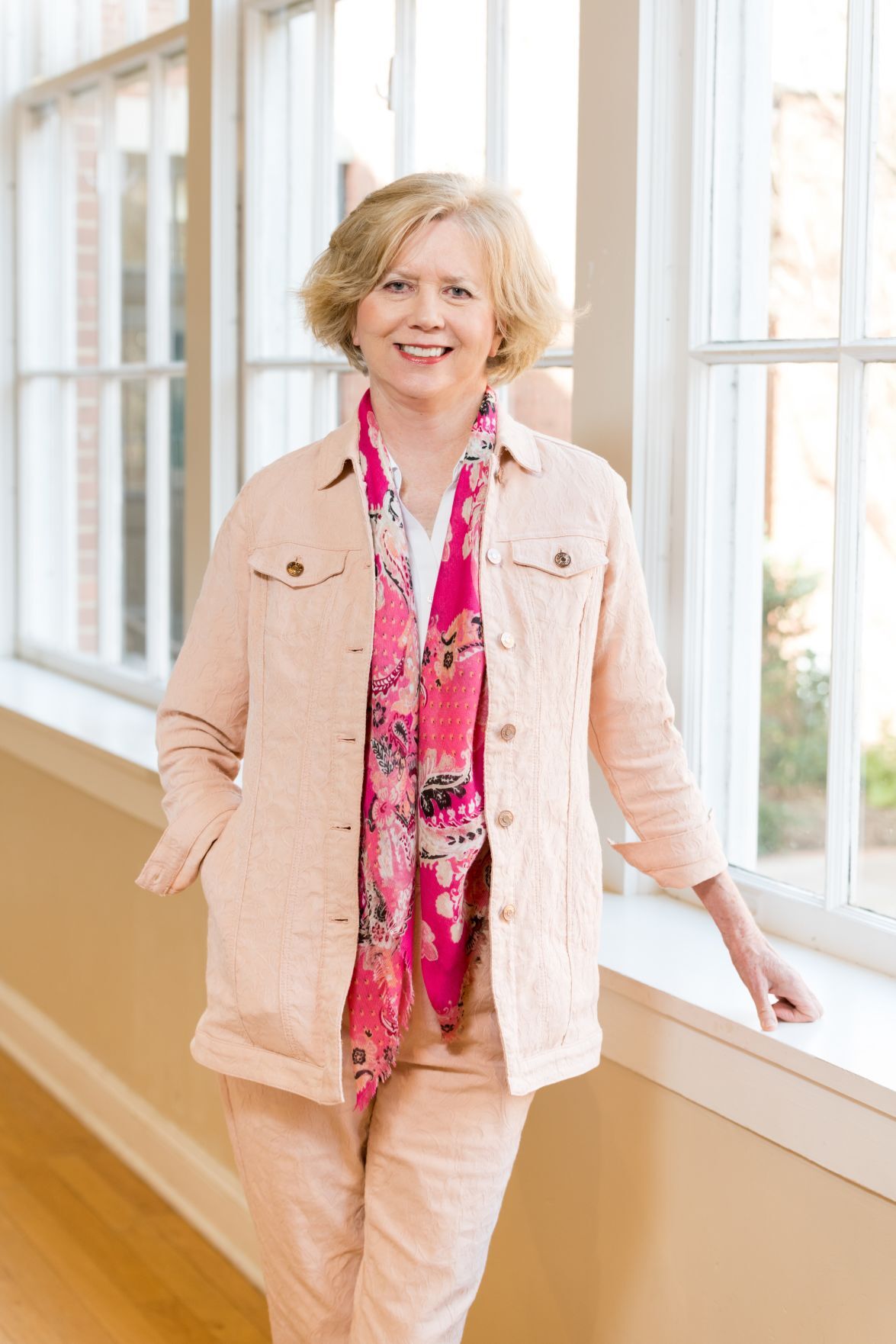 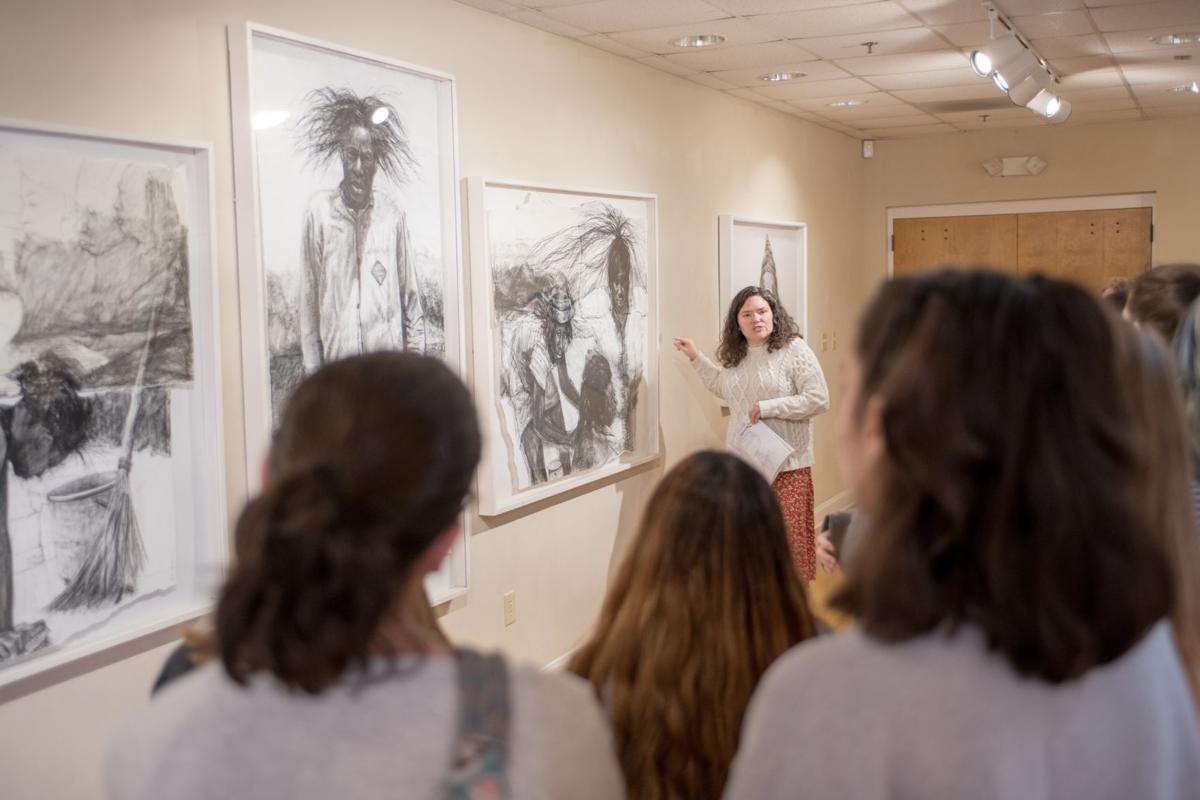 Sylvia Martin talks to a group about the works of artist Tyrone Geter. 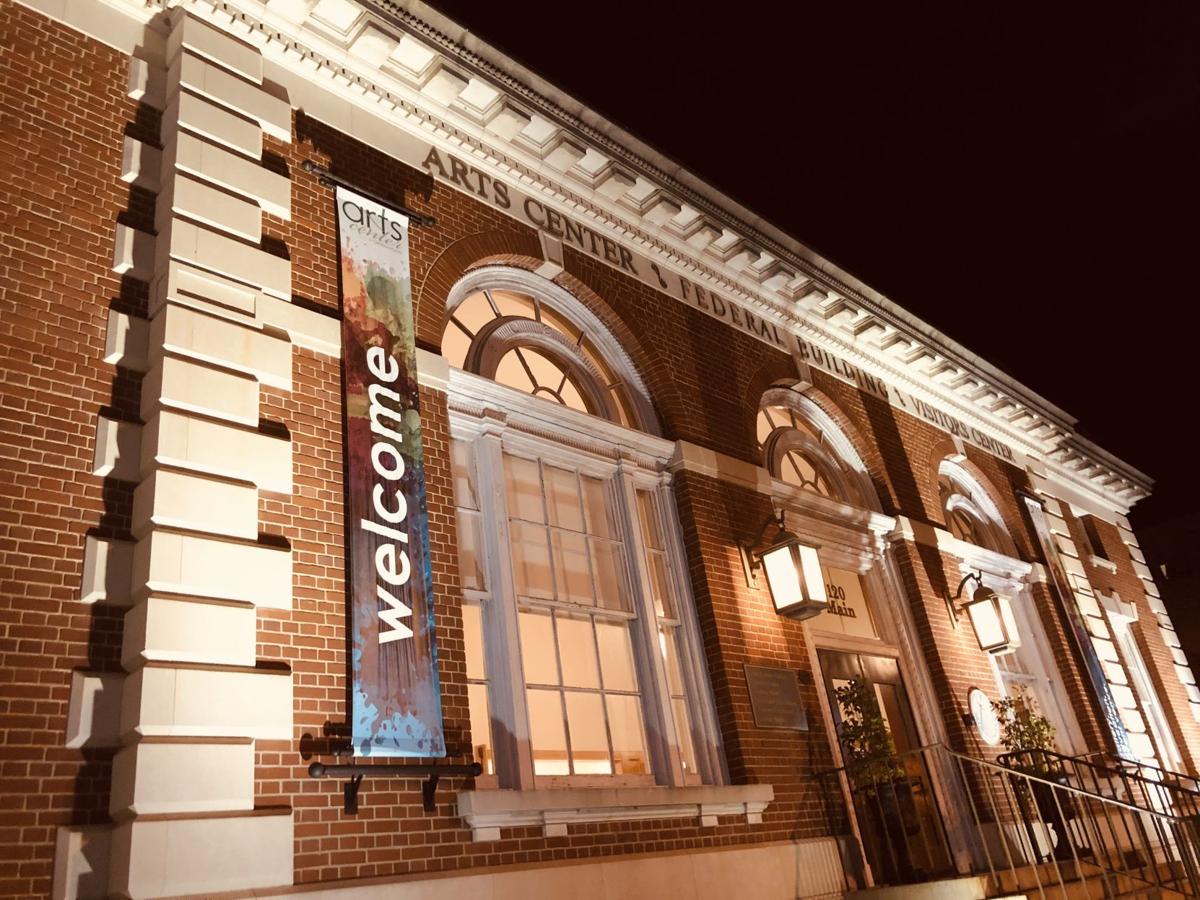 The Arts Center of Greenwood is among SC organizations to receive funding from the South Carolina Arts Commission. The commission also has an artist services coordinator that can help artists navigate grant writing and applying for fellowships, among other things. 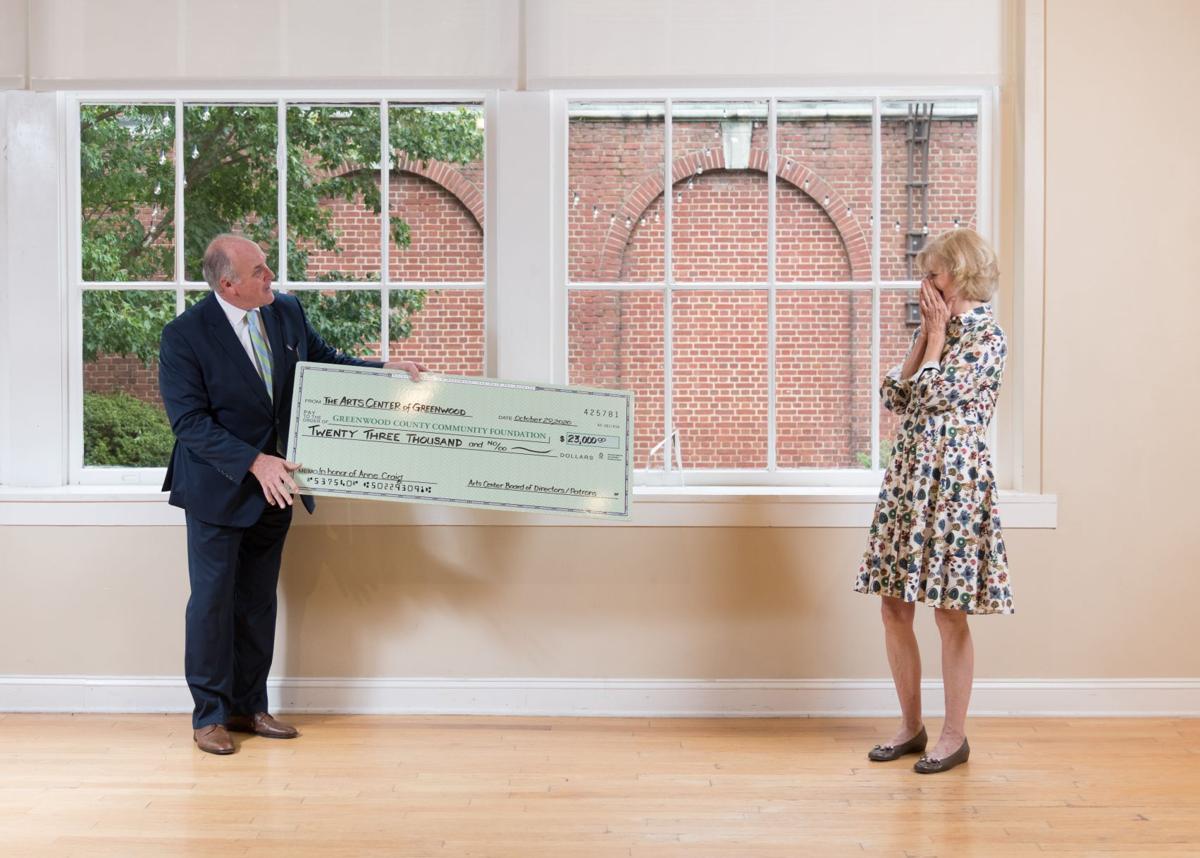 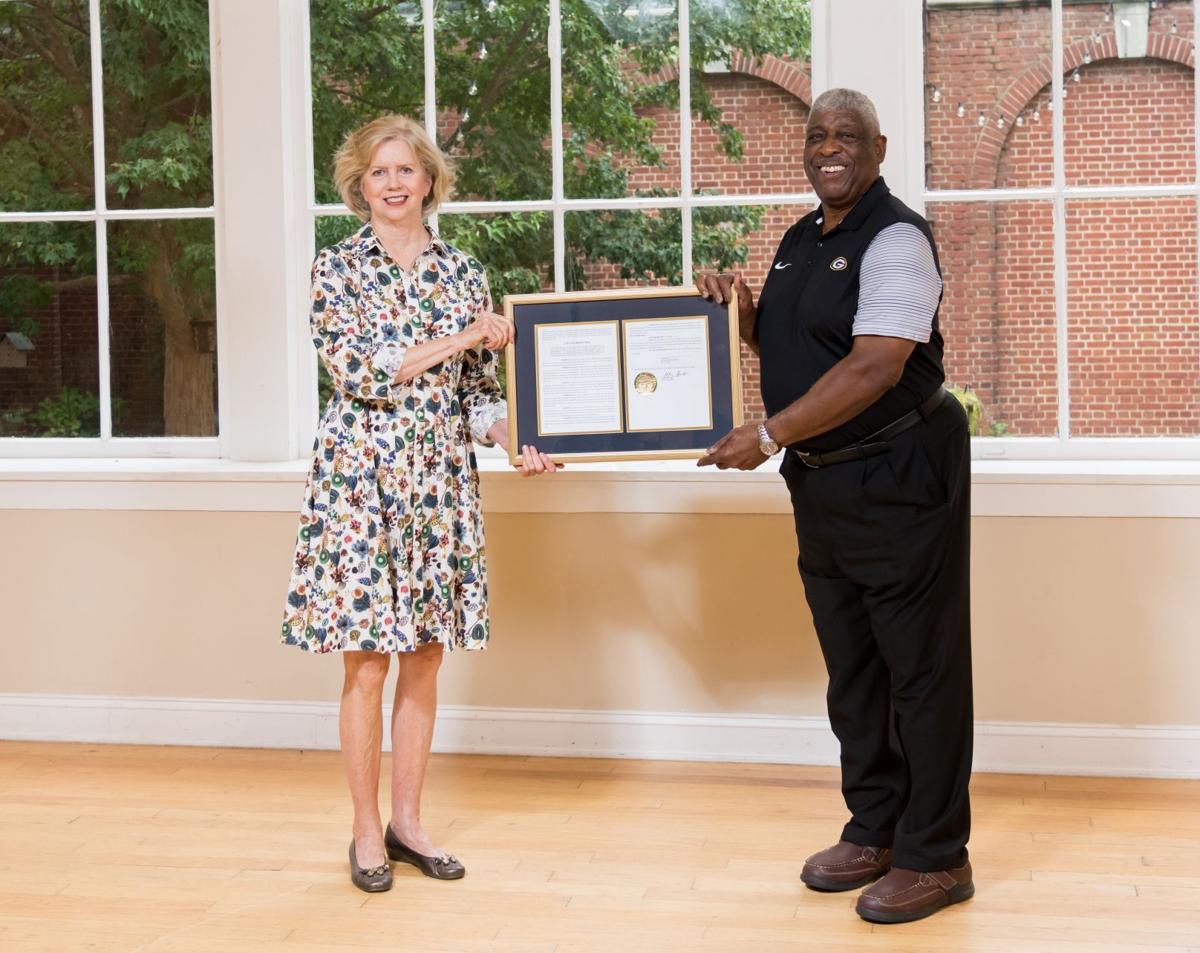 Anne Craig, left, and Glenda Horton have a little fun during the Arts Center of Greenwood's pollinator-themed exhibit in the summer of 2018.

Sylvia Martin talks to a group about the works of artist Tyrone Geter.

The Arts Center of Greenwood is among SC organizations to receive funding from the South Carolina Arts Commission. The commission also has an artist services coordinator that can help artists navigate grant writing and applying for fellowships, among other things.

Upon retirement as founding executive director for the Arts Center of Greenwood, Anne Craig said her goals have been accomplished and then some.

“We have a variety of programming for youths and adults and we now have an endowment to support programming, particularly for youths,” Craig said. “We will continue to work on that.”

A desire, Craig said, is for the Arts Center to be well-funded.

“The only part of the job that has been draining is raising the budget, from scratch, year-to-year,” Craig said.

Arts Center income is generated through grants, allocations, contributions and fees generated by programs and rentals and fundraisers.

“A dream is to solidify income sources and reach more people with our programs and services,” Craig said. “I would love to further explore the international communities here.”

Craig was Arts Center of Greenwood executive director from January 1997 through March 2020, and stayed on as an adviser through September.

“We are thrilled Anne is not going too far away,” Martin said. “She’s going to have a studio office downstairs in the building. I think it’s beautiful she will get to enjoy this lovely space that she has nurtured. We’re going to try to not give her too much work.”

“I just love it,” Craig said. “I’ve never painted, but I’ve done a little bit of drawing. Watercolor is so beautiful.”

A vision for the futureCraig remembers when the then-Greenwood Arts Council was in a much smaller, less visible space on Waller Avenue.

“I would walk down Waller and look over at the Federal Building and think to myself, ‘I could think of some great things for that building.’”

Now, Craig says it’s time for new leadership and vision to continue what she started in the arts for Greenwood.

Craig affectionately refers to the former federal building as the “grande dame of the Uptown.”

“We started talking about possible uses for the building in 1999,” Craig recalled, noting she realized two years prior that the number of federal offices in the building had dwindled.

A $3.5 million capital campaign fostered the Emerald Triangle Project in Uptown Greenwood, establishing the Cultural District, anchored by The Arts Center at the Federal Building, Greenwood Community Theatre and The Museum.

The 30,000-square-foot Arts Center at the Federal Building opened in February 2006.

Craig said renovation of the federal building, GCT and The Museum contributed to momentum for shops and restaurants to open in Uptown.

“Before the three cultural entities of the district were renovated and open, you could ride through Uptown on the weekends and there was not a car to be seen,” she said. “Now, I ride through, and it’s packed.”

“Once we had the facility, the building, it enabled us to host large, professional exhibits, programs for youth, including robotics and a reception hall,” Craig said. “It’s also been greatly used by the community, for public and private events — weddings and reunions and meetings. ... We do an amazing amount of work on a very small budget.”

Recently, Craig was presented a financial gift to the Arts Center Endowment Fund. Established in 2014, with the Greenwood County Community Foundation, this fund is helping to ensure future stability of the Arts Center.

It was established with a gift from the estate of the late Virginia Self.

Mamie W. Nicholson, president of the Greenwood-based philanthropic Self Family Foundation, said the foundation has been an arts supporter here from the then Arts Council’s beginnings.

Self Family Foundation approved a grant to hire a full-time director for the council’s first executive director, Craig, in 1995, and has continued to grant funds for endeavors.

“Arts are so important for the community’s quality of life and development of our children,” Nicholson said. “The foundation has been supportive of not only the Arts Center, but Greenwood Community Theatre and The Museum. ... We feel it’s important to invest in Arts Council outreach programs to provide opportunities for children who might not have those otherwise.”

Nicholson credits Craig with helping Uptown Greenwood receive designation as a cultural district from the South Carolina Arts Commission in 2017.

“For more than 23 years, Anne has done a great job in her quiet way,” Nicholson said. “Just think of the partnerships with Burton Center for Special Needs, our school districts, and our nonprofits and their summer and after-school programs. Sylvia Martin is doing children’s art kits in a box so children can do projects if they cannot come here during the pandemic.”

Self Family Foundation trustee Cade Brennan Jackson said her late mother, Virginia Self, was a talented painter in her own right who viewed art as a mode of self-expression, learning and growth.

“Virginia (Self) had a heart for young artists,” Nicholson said. “She purchased their art, even from artists set up on the side of the road. She wanted to be sure they were able to flourish.”

A dramatic high point for Craig in Arts Center exhibits has been hosting artist Tyrone Geter.

Geter, an Alabama native who now lives in South Carolina, had an exhibit at the Center this year, before shutdowns during the novel coronavirus pandemic.

“He is a rare and phenomenal talent,” Craig said of Geter. “His art is off the charts and his social commentary within it is subtle and meaningful. When you look at his figures, you imagine a whole world of their personalities and their challenges and backgrounds. His work is thought-provoking.”

From mid-March to nearly mid-June, the Arts Center was closed.

“When we re-opened, we felt it really important to have something for people to come and see, maybe even more important during these times,” Martin said. “We re-adjusted our calendar. Anne had the great idea to move our annual local art show up.”

People were able to view “A Local Look” online virtually on Facebook and in person, following recommended public health guidelines for social distancing.

“I’m grateful we have been able to reopen and provide offerings such as paint and pour classes and children’s camps, but in a much reduced way during the pandemic,” Craig said. “I didn’t have anything like that growing up. It’s been a real gift to share art with children and families.”

Martin, who has a background in teaching art, recalls Craig encouraged her to bring in more youth and families when she was first hired as a youth and outreach coordinator.

“I’ll never forget the first Arts Center Family Fun Day that we did in 2015,” Martin said. “We knew we needed it to pair it with something and GCT’s production at the time was ‘Willy Wonka’. We went all out and made paper candies all over the place. We had about 400 people come to that event.

“After it was all said and done, Anne came in and she just had tears in her eyes,” Martin added. “She was so overjoyed to see so many families in the gallery.”

Art, Craig said, has to be an experience and it should be inviting. That’s one reason why Craig has worked on Arts Center community collaborations with educational and cultural organizations.

“I was born with a dog gene, a horse gene and an art gene,” Craig joked. “All were just there, but my parents didn’t get me a dog, a horse or art. ... I didn’t have art in school, but I remember going to McCaslan’s and buying lots of painting sets. Ruth Martin also taught art classes in a building near where the American Legion Post 20 is now. I also took classes from a Marie Chisolm who taught at Lander.”

Craig said another favorite memory for her is the first classical music performance in the Arts Center’s reception hall.

“I just boo-hooed,” Craig said. “Sitting there, listening to that beautiful music, I realized my dream for this building had come true.”

Arts Center of Greenwood at the Federal Building

The Federal Building, dating to 1911, was acquired by the City of Greenwood through the U.S. Department of Interior National Parks Service Federal Lands to Parks Program.

Since opening in February 2006, the Arts Center of Greenwood at the Federal Building has welcomed over 250,000 visitors. In 2009, the center was a recipient of the 2008 Elizabeth O'Neill Verner Governor's Award for the Arts in recognition of outstanding contributions to the arts in South Carolina.