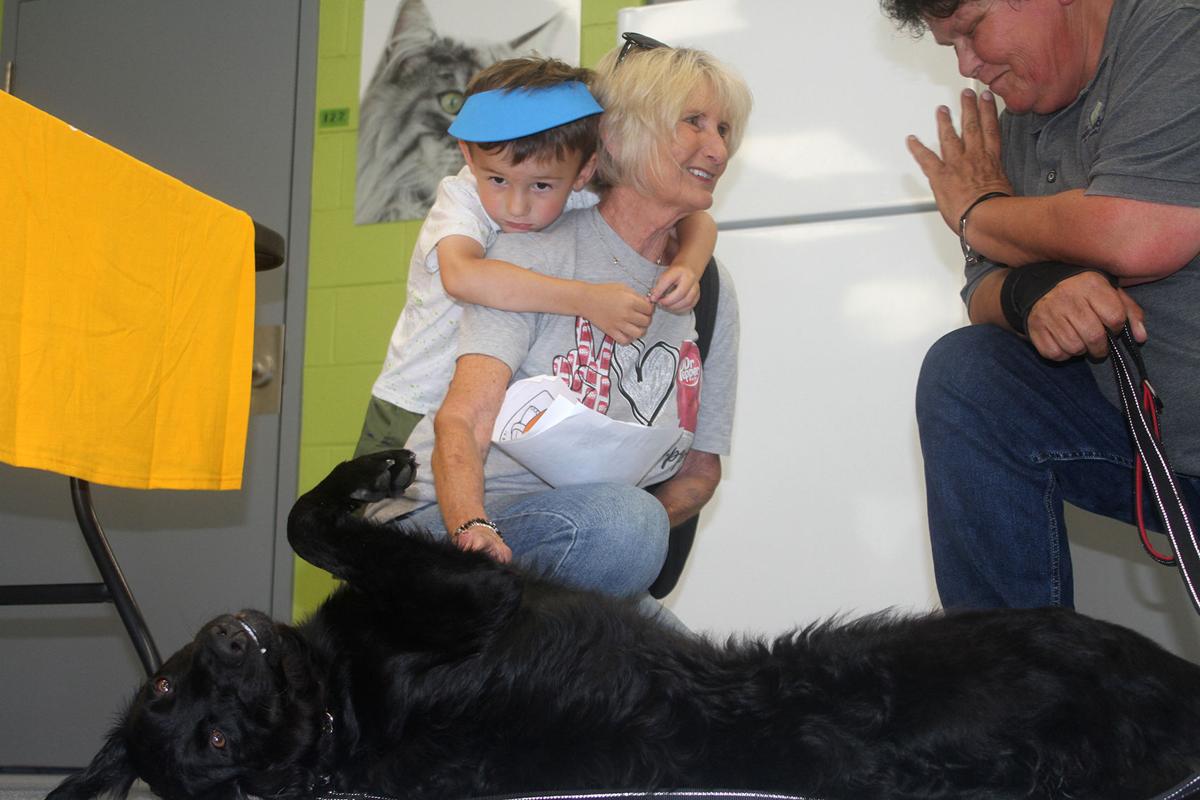 Paul Dodgen was somewhat ambivalent about Liam’s intentions at the Humane Society of Greenwood during a Saturday visit. He stands behind his grandmother, Becky Coleman, who talks Connie Mawyer, executive director of the Society. 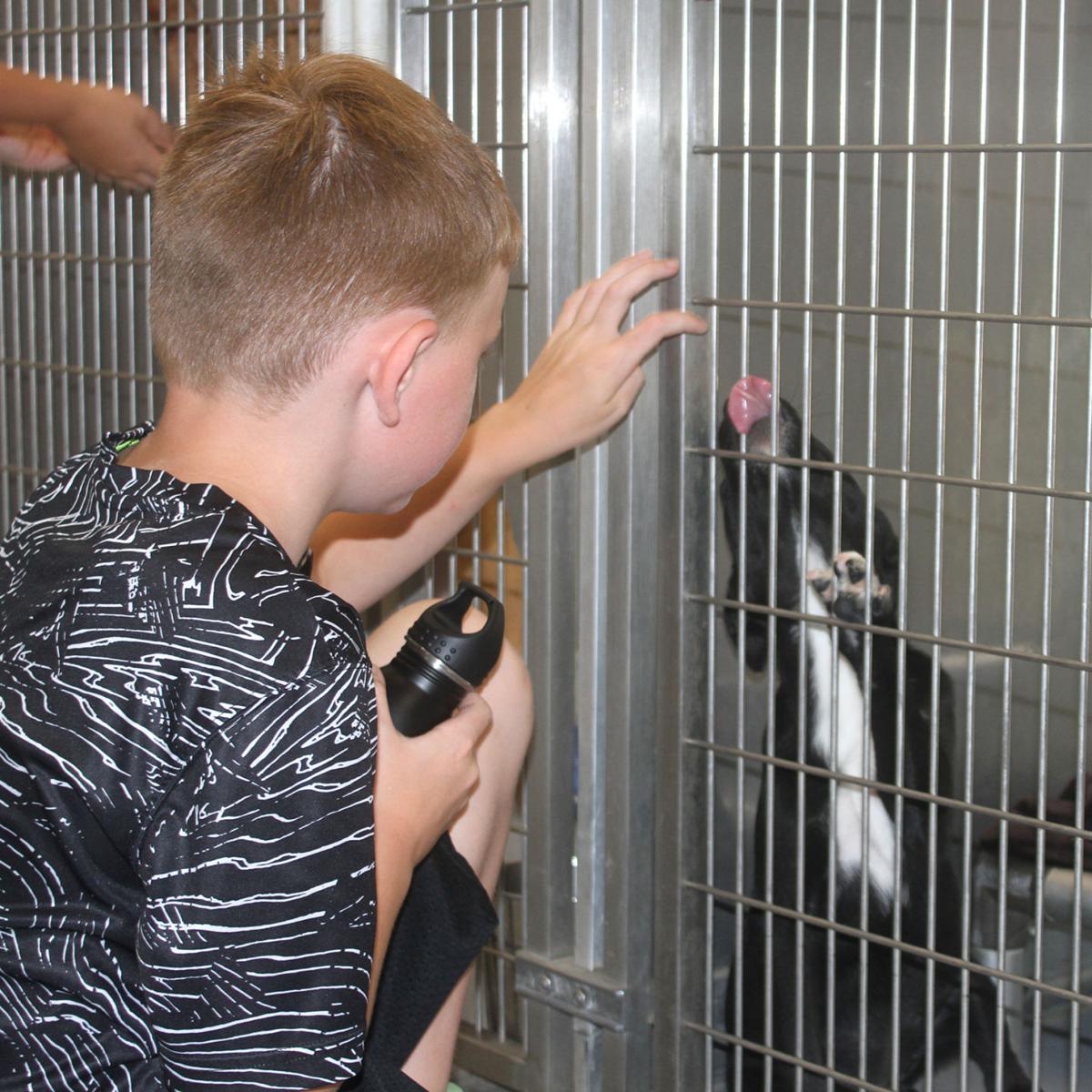 Jace Rodgers was ready to make friends with several dogs during a Saturday visit to the Humane Society of Greenwood.

Paul Dodgen was somewhat ambivalent about Liam’s intentions at the Humane Society of Greenwood during a Saturday visit. He stands behind his grandmother, Becky Coleman, who talks Connie Mawyer, executive director of the Society.

Jace Rodgers was ready to make friends with several dogs during a Saturday visit to the Humane Society of Greenwood.

A better life is worth celebrating.

Devotion to that credo earned the Humane Society of Greenwood the 2020 Organization of the year status from the No Kill South Carolina initiative of the Charleston Animal Society. A celebration took place Saturday, in conjunction with a long-delayed open house.

Opened in 2018, the center’s grand opening celebration had to be postponed to accommodate installation of equipment such as tiling to reduce the level of noise, and then again because of the pandemic, according to board member Amaryllis Turman.

Now people are able to get out of the boat, she said. And since June welcomes the S.C. Festival of Flowers, it’s a celebration month for Greenwood County.

Shelter staff offered visitors tours of the facility, along with T-shirts, food from Chick-fil-A and guitar music provided by Jarratt Smith, and of course, opportunities to visit animals that are available for adoption.

“We are just so happy and thankful that we are able to make that happen,” Turman said of the no-kill recognition. It doesn’t mean the work is done. The goal is to be a visible resource in the community, such as arranging microchip clinics and trap, neuter and return — or TNR — programs.

Progress can be seen in Ninety Six with its program to manage its community cat population. Several people in the Mill Village area attended a meeting about a TNR program week ago. Feeding stations have been set out, according to one supporter of the effort who stopped by the shelter to pick up traps. Trapping was expected to begin Sunday.

Earning the Organization of the Year status was a result of hard work by all shelter staff with the goal of meeting the 5 Freedoms, according to Connie Mawyer, executive director of the Society.

Abiding by those rules lets shelter staff better care for the animals, Mawyer said. As a result, animals can be ready for adoption sooner. Out of all the shelters in the state, only five have achieved no-kill organization of the year status.

Part of that success is evident in Liam, the shelter’s mascot. Mawyer said his duties include interacting with other dogs so staffers can determine if the animal is dog-friendly. Liam also is trained to build interactions between dogs and people.

He demonstrated that talent with a little boy who wasn’t anxious to make friends, as he made clear by hiding behind his grandmother. Liam lay down on his back, as though a belly rub would be the highlight of his day.

Such action is designed to show people, especially children, that he isn’t a threat, Mawyer said.

Olympia Calhoun, owner of Calhoun’s Tropical Sno, offered snow cones with 50 percent of proceeds going to the shelter. An employee at Brewer Middle School, Calhoun was happy to know that a student volunteers at the shelter and expressed hope that more students might volunteer.

Visitors took advantage of the opportunity to meet animals, even if contact was limited to high-fives with paws and furious licking of fingers through cage bars. One youth cried out “I want my puppy!” He wasn’t specific as to which puppy was his.

One couple visited a dog they hope to take home. They found him, apparently as a stray. His “father” pulled out his cellphone to show pictures of the dog’s condition. He was emaciated and his claws were so long, they were growing back into his paws.

A few months at the shelter and his paws are in better condition, and while painfully thin, his skin no longer hangs off his ribs. Although he has to remain at the shelter until his heartworm condition is cleared up, his hopeful parents have a simple goal.

“I want to take him home and spoil him rotten,” his “father” said.

'We have a deal': Biden announces infrastructure agreement

Discord over whether to halt South Carolina abortion case

Ted Cruz accused of 'mansplaining' as hearing goes off the rails