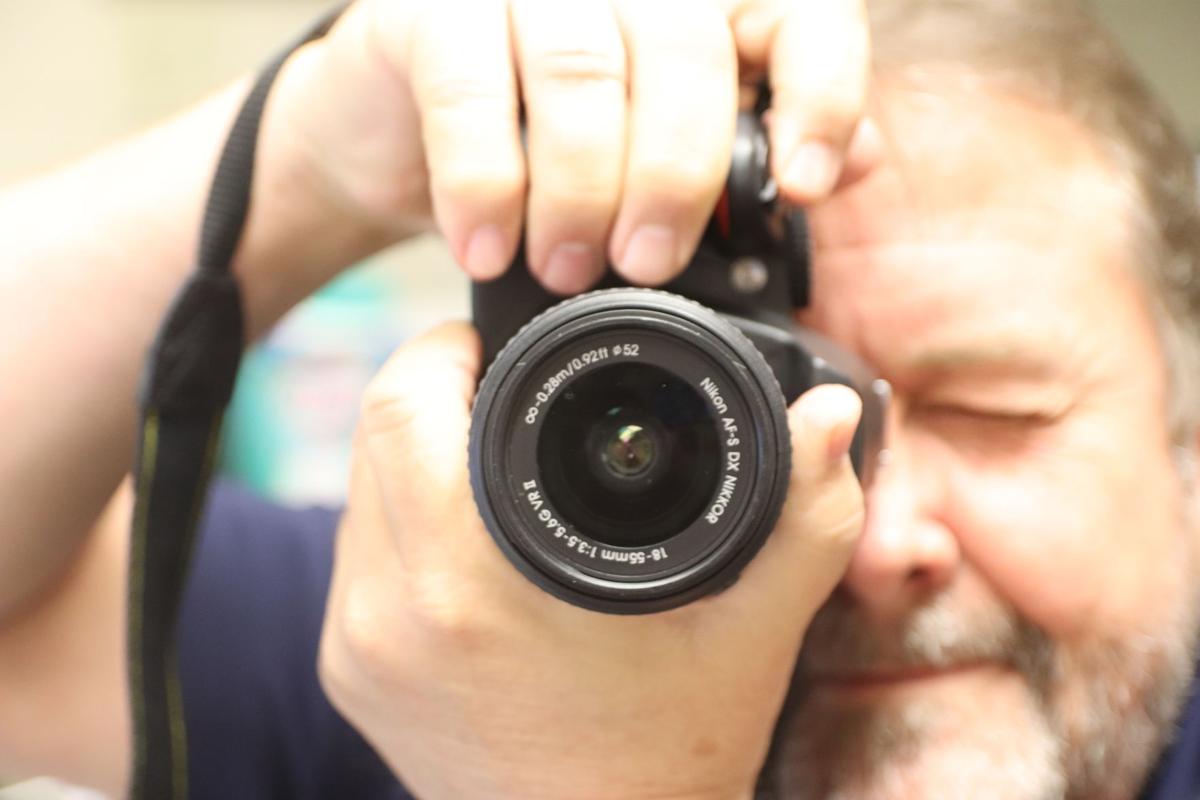 Kendall Adams said he stays in contact with his students long after they graduate. 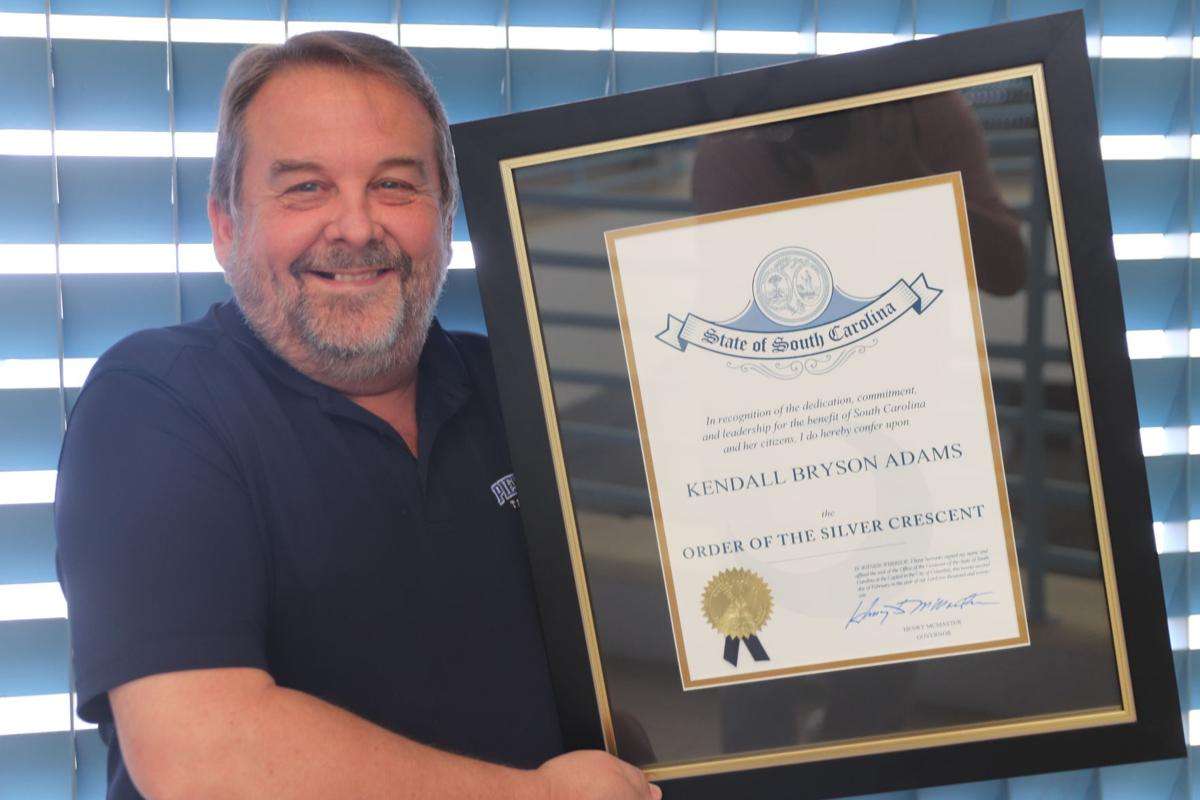 Piedmont Tech professor Kendall Adams holds the Order of the Silver Crescent he received. It’s the state’s highest civilian award for significant contributions, leadership, volunteerism and lifelong influence within a region or community.

Kendall Adams said he stays in contact with his students long after they graduate.

Piedmont Tech professor Kendall Adams holds the Order of the Silver Crescent he received. It’s the state’s highest civilian award for significant contributions, leadership, volunteerism and lifelong influence within a region or community.

Kendall Adams said he’s like another parent to his students.

Adams, the program director for Commercial Arts and Photography at Piedmont Technical College, spends more time counseling students than teaching them in the classroom.

That doesn’t bother him. His role in their lives doesn’t end once they earn a diploma.

“We get the phone calls when they’re struggling with something,” Adams said. “It’s a situation where they develop a trust bond with us. And, because of that, they are able to talk to us freely. They know we are going to keep it confidential. They know that we have their best interest at heart, and that we would never do anything that would be detrimental to them.”

Adams, who has been head of the department since 2009, recently received the Order of the Silver Crescent, which is the state’s highest civilian award for significant contributions, leadership, volunteerism and lifelong influence within a region or community.

“I had no idea this was coming, and it meant the world to me,” said Adams, who joined the PTC staff in 1997 as a part-time instructor. “I was completely caught off guard. Humbled is a great expression. It just gives me a good reason to keep coming to work and do what I do.”

Fellow instructor Mike Beckom, who teaches drawing at PTC, was once one of Adams’ students. In a letter to Gov. Henry McMaster, in nomination for the award, Beckom wrote, “Kendall has this uncanny ability to see in other folks the things that they may not see themselves. He saw something in me, and I’m really glad he did.”

Adams tried to make every class fun and engaging. He tries to find some way to touch on a point that is unique to each student.

“The minute the student realizes you are engaged and truly care about them, and that you’re willing to go that extra mile, they’ll do whatever you need,” Adams said. “They pay better attention. They strive to make you proud.”

In her letter to the governor, former student Lexi Kelly said when she first bought a camera, she never planned on pursuing a career in photography.

Adams said Kelly is a great example of someone who thrived within the program.

“When she came to us, she was in a bad place,” Adams said. “She really didn’t really want to come to the department. Something I said — I don’t know what — got her attention. I hear from Lexi a couple of times a month now, and she’s long since been graduated.”

Adams said there a lot of students he’s worked with through the years that he’s “cultivated” and helped them be the best they can be.

“We joke about calling them our tribe,” Adams said of his students. “They have absolutely no problem texting or calling us on the weekends or at night when they need help. And that’s fine. If you are going to do this, you might as well be fully invested in it.”

Manuel, who now works in the graphics department at Fujifilm, redesigned The Greenwood Promise logo.

“Kendall Adams has done so much for me,” Manuel said. “He brought me out of my shell. He is a very good teacher, and he makes sure you understand everything. He won’t rush you through. I appreciate both him and Mike Beckom a lot. They want us as artists to go out in the workforce and be successful.”

Adams said he and Beckom get students every semester who’ve had no support, no guidance and no encouragement. He jokingly said he often can spot his students during orientation. Many have tattoos, colored hair and tie-dyed shirts.

“It’s the whole atmosphere we’ve tried to create here,” Adams said. “We get the creative, over-the-top, eccentric people. And they get here, and we’re practically living in their back pocket.

“We have kids in class an average of five to seven hours a day. We’re right there with them. We’re constantly pushing them to be better. We’re not giving them the easy way out. When they do better, they get congratulated. They get some kind of recognition, and you start to see a different person emerge.”

Every day is different for Adams. He works with creative people at the base level and those at the highest levels of achievement.

“It’s just great to be able to have that kind of impact on their lives and see them go from what sometimes is an extremely shy and unassuming person to somebody who believes in themselves and is able to present and produce professional-quality work,” Adams said. “That never ceases to be rewarding.

“It’s always fun and challenging when you’ve got somebody who comes in and you can see a raw talent, but they haven’t realized yet what they have. That happens a lot of times in the drawing classes.”

One of the things Adams said he and Beckom are most proud of is getting the commercial arts program affiliated with the Kappa Pi International Art Society. Piedmont Tech is the first two-year school in the nation to belong to Kappa Pi.

Adams’ father worked for 36 years for the Post and Courier newspaper of Charleston.

“So, I literally grew up on the pressroom floor,” Adams said. “I knew all the pressmen. I had a summer job working in the pre-press department. I’ve always had something to do with publishing, imaging, that type of thing.”

He graduated in 1981 with a Bachelor of Fine Arts in photography, printmaking and graphic design from Longwood University in Virginia. When he couldn’t find a job in his field, he went into sales.

“It took about six months to realize that, although I was doing great at sales, I just wasn’t happy,” he said.

He went to work for a small advertising agency in Charleston that handled Piggly Wiggly Carolina. He later decided to move to Greenwood. He worked at a couple of places trying to decide what he wanted to do. He finally landed at Camera America in the mall in Greenwood. He worked there for several years, taking it, he said, from nearly going out of business to being “quite successful.”

Adams then went to work for America Fast Photo & Camera and was the director of operations for seven states. He later joined the Rug Barn in Abbeville and took control of all aspects of photography and catalog production. He left there and went to work for American Speedy Printing, which is now Allegra Print and Imaging, before joining Piedmont Tech full time 12 years ago.

Beckom said Adams had a vision of his future before he did.

“In the months since getting my dream job, I’ve worked closely with Kendall and we’ve managed to accomplish some major things for our students,” Beckom said in his letter to the governor. “He still teaches me new things daily.”