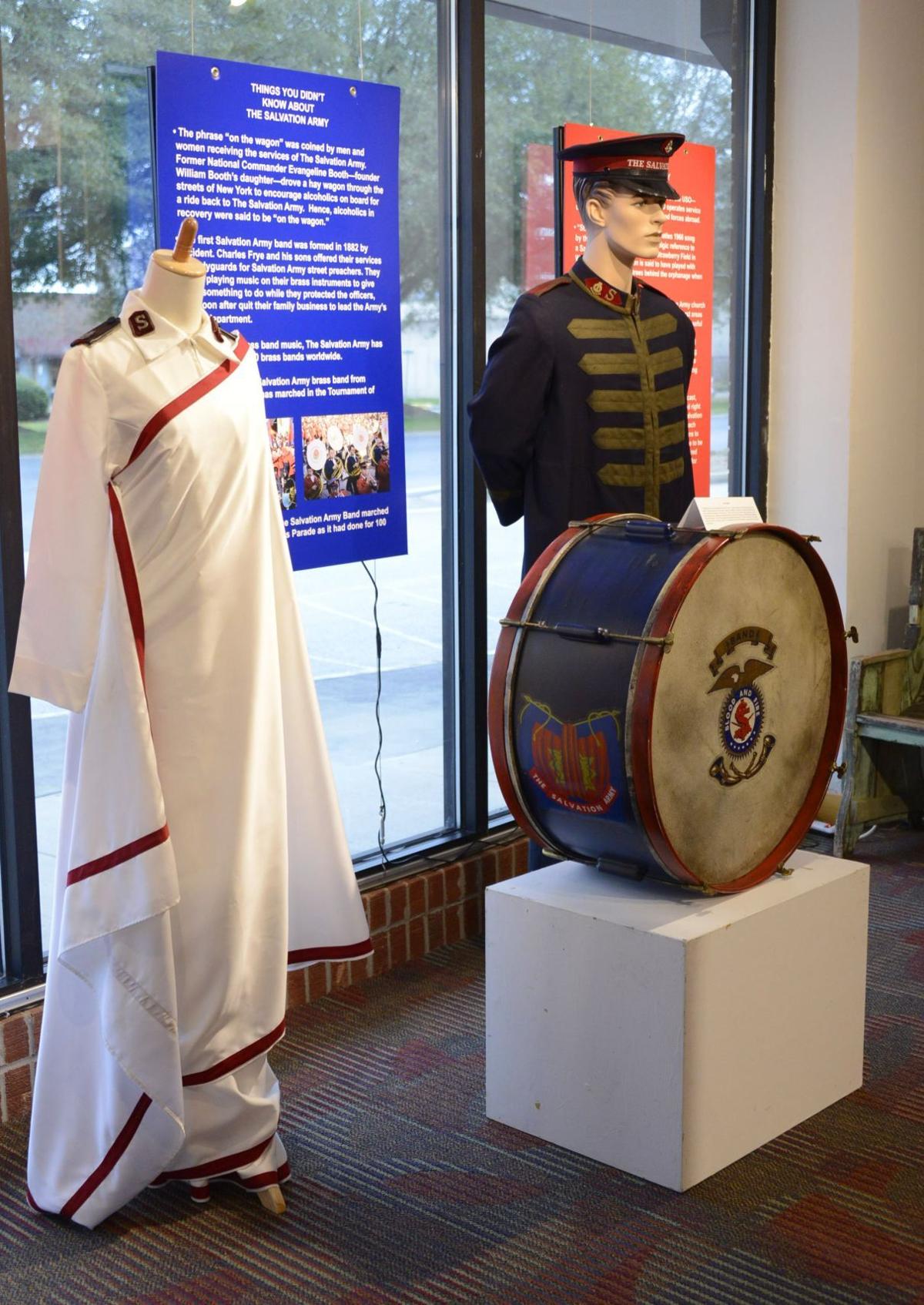 The Salvation Army was founded in London, England in 1865 and was established in the United States in 1880. It is set up and operated on a military pattern. Each Salvation Army officer is an ordained minister. 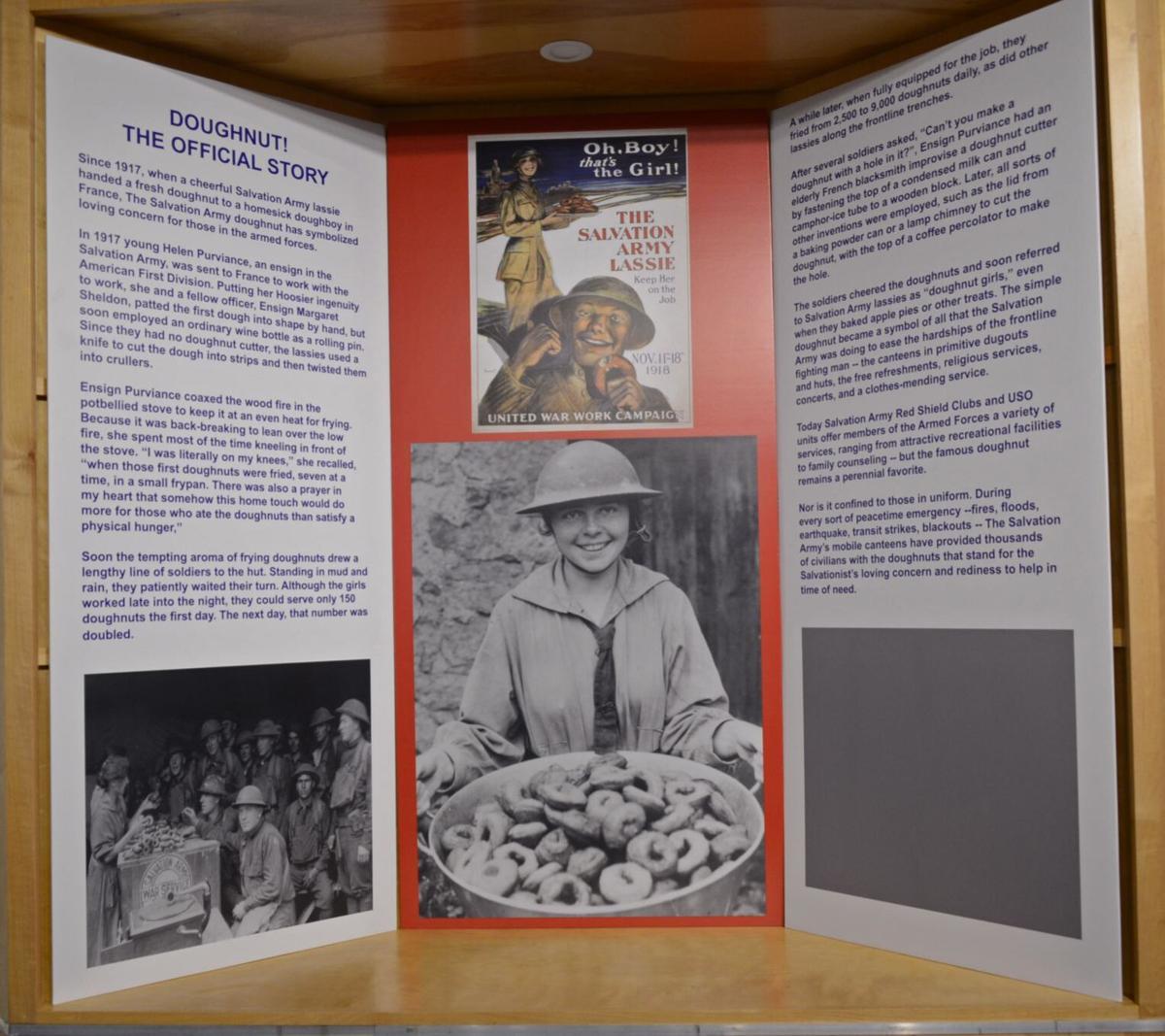 During World War I, The Salvation Army workers served coffee and doughnuts to soldiers in the trenches. A doughnut recipe remains to this day. 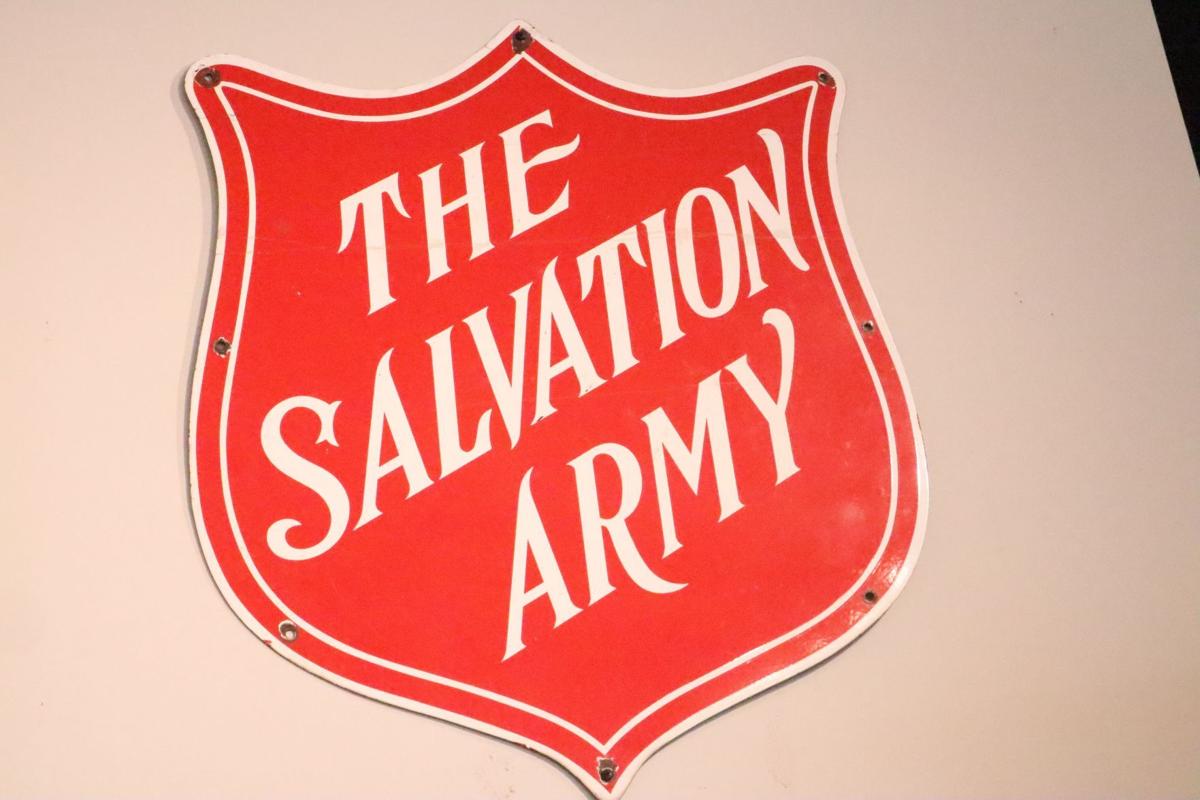 The Salvation Army Greenwood Corps is celebrating its 100th anniversary, with a new main floor exhibit at The Museum. 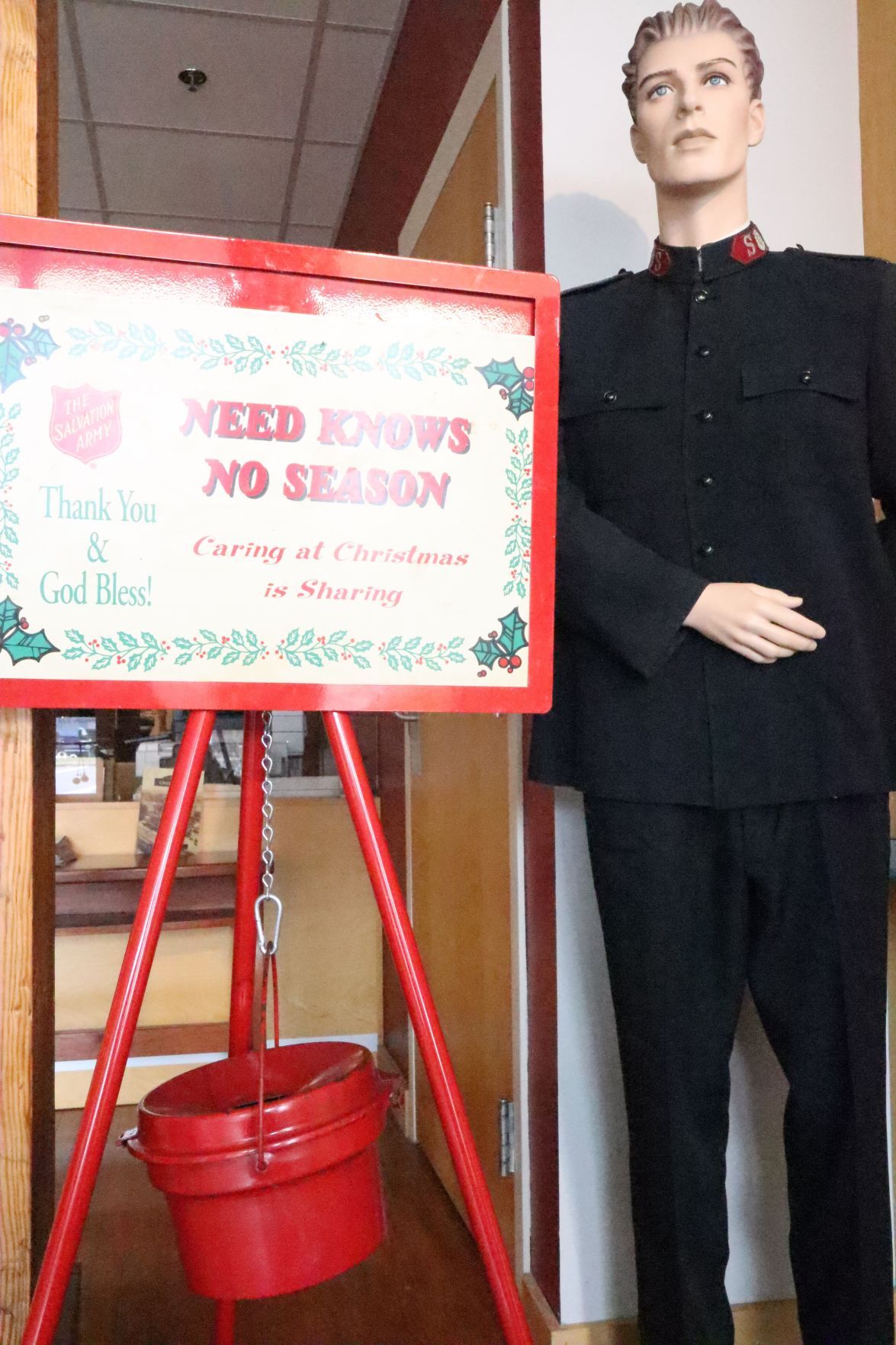 The Museum’s exhibit includes items from The Salvation Army Southern Historical Center in Atlanta and additional photographs and ministry details from other resources. 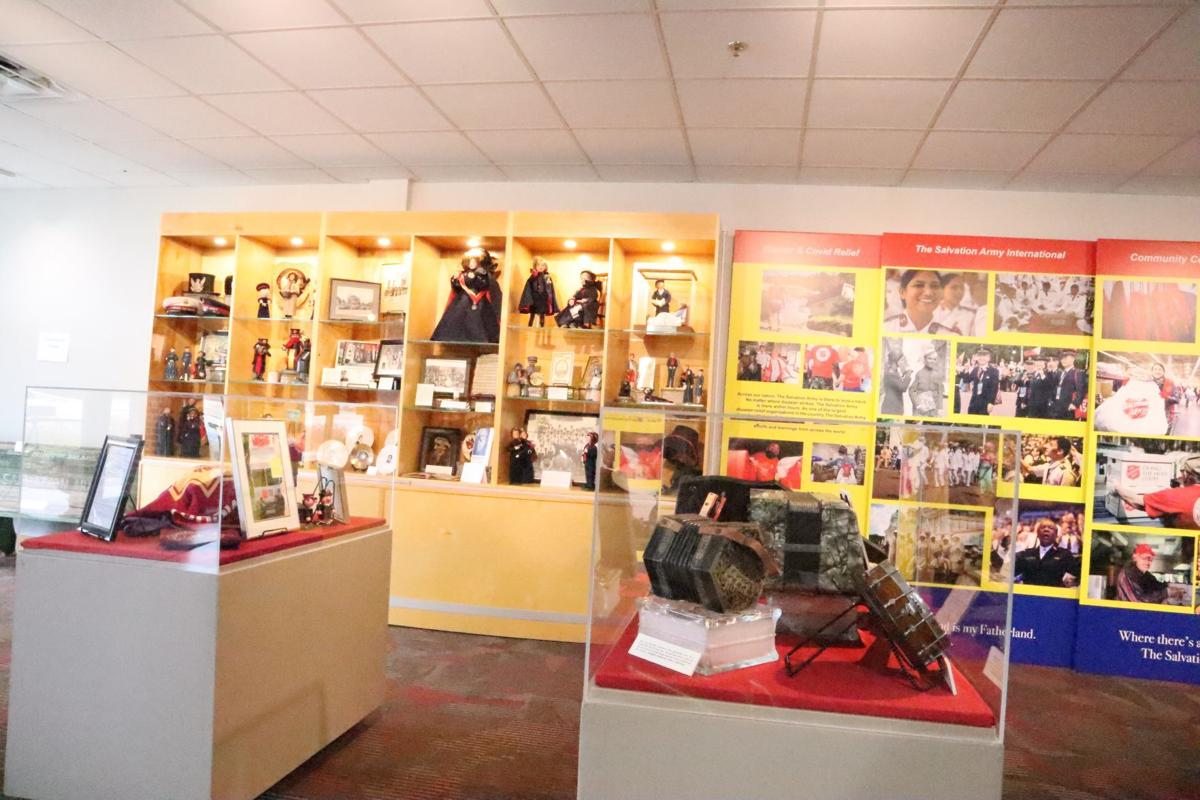 The Salvation Army was founded in London, England in 1865 and was established in the United States in 1880. It is set up and operated on a military pattern. Each Salvation Army officer is an ordained minister.

During World War I, The Salvation Army workers served coffee and doughnuts to soldiers in the trenches. A doughnut recipe remains to this day.

The Salvation Army Greenwood Corps is celebrating its 100th anniversary, with a new main floor exhibit at The Museum.

The Museum’s exhibit includes items from The Salvation Army Southern Historical Center in Atlanta and additional photographs and ministry details from other resources.

More than a charity, red kettles and thrift stores, The Salvation Army is an international Christian religious organization, with social services and sharing the gospel at the heart of mission.

The Greenwood Corps of The Salvation Army is celebrating 100 years. The Museum of Greenwood has a newly opened main floor exhibit about the organization.

Marion Smith, exhibits coordinator at The Museum, said he was unaware before beginning exhibit work that The Salvation Army is an evangelical part of the universal Christian church.

In fact, worship services are conducted at 222 Pressley St. in Greenwood. Sundays, Sunday School is at 10 a.m. and worship service is at 11 a.m. Thursday night services have been canceled until further notice during the novel coronavirus pandemic.

“There are four centers for The Salvation Army officer training in the United States,” Smith said. “The Southern territory is comprised of 14 states. In each of the four United States territories, there is a training college for officers. Evangeline Booth College serves the Southern territory. ... It’s a two-year course, in residence. When officers graduate, they go to a church, or corps.”

Smith said The Salvation Army was active in Greenwood before 1921, but there was not an established corps in Greenwood until then.

“There’s very little written history of the early corps here, with a year-to-year timeline and memorabilia,” Smith noted, largely because the organization has been focused on mission and services instead of scrapbooking its history.

Set up and operated on a military pattern, The Salvation Army leaders have ranks of military officers. Leading the Greenwood Corps since June 2016 are Majors Jason S. and Angela Hughes. They have served as Salvation Army Corps officers for 19 years.

The husband and wife team manage operations at The Greenwood Corps site, where local services have been headquartered since 1962. In addition to worship services, also offered is: a food pantry, rent/utilities emergency assistance, Christmas assistance and disaster relief.

Maj. Jason S. Hughes says The Salvation Army in Greenwood began providing services in 1913 as what is known as an outpost, of the Anderson Corps.

“It was the equivalent then of what would be considered a satellite office,” Hughes said. “Then, in 1921, we became a stand-alone Salvation Army location. The way that we work, we’re all one Salvation Army.”

More than 120 credit hours of instruction are part of the two-year training courses for officers, Hughes said.

“Cadets go to class during the day and there is field training many evenings and most weekends,” Hughes said.

Hughes said the mission of The Salvation Army is to preach the Christian gospel and meet human needs, without discrimination.

It partners with other organizations to best serve, Hughes said, noting The Salvation Army Greenwood Corps has been a partner agency of the local United Way since the time that nonprofit was known as a Community Chest.

“Outside of the United States, in pretty much any other country in the world, when you say, ‘Salvation Army’ the first thought is a church that is serving,” Hughes said. “We’re the fourth-largest denomination on the continent of Africa. ... In the United States, we’ve become so good at social services that it overshadows everything else we do.”

The Greenwood Corps served more than 9,400 people during 2020, in its five-county service area.

“80,000 pounds of that food was between March and October, with our local services,” Hughes said. “More than 900 children were served this past year during our Christmas toy program and more than 600 children the year before.”

Additionally, Hughes said his wife and fellow Salvation Army major, Angela, was deployed in October 2020, to help with hurricane disaster assistance on the Gulf Coast, with a focus on mass feeding and hydration.

“When we see people hurting, we’re called to do something about it,” Hughes said.

The Greenwood Corps has a nine-member advisory board. Paul Johnson is chairman.

“Personal stories are the story of The Salvation Army,” Johnson said. He recalls the Greenwood Corps helping someone in need get necessary personal identification and another, where someone needed to reach an out-of-town older family member, as well as a family helped by the Christmas toy program.

Maj. Cedric William “Bill” McClure, who is now with The Salvation Army in Louisville, Kentucky, and his wife, Melody, were officers at the Greenwood Corps more than five years ago.

“Greenwood was our longest appointment,” McClure said. “We were there five years. People were warm and friendly in the church and the community.”

During the McClures’ tenure, the Greenwood Corps’ transit lodge was closed and The Family Store faced competition when Goodwill opened.

“We referred people to other organizations in the community providing shelter, so they weren’t without,” McClure said. “We try to support needs and give people a chance to accept salvation.”

McClure said within The Salvation Army, both spouses must be ordained and go through training college to marry.

“We don’t marry outside of (The Salvation) Army,” McClure said.

Richard Greer, of Hodges, has been a member of The Salvation Army church for more than 50 years. He began attending Greenwood church services as a youth and is now 65.

“We came here on vacation in 1961 and the church wasn’t finished yet, and the lodge was in process of being built,” recalls Greer. “The first year we were here, it snowed. Growing up in Florida before that, I had never seen snow. It was in October. A snow-laden limb on a tree behind the lodge broke off and came through that side of the building. There were three cinder blocks laying on my mom’s pillow in my parents’ bedroom. ... I got to know the Lord through The Salvation Army when I was just a little boy. I would not trade the world for it. It really astounds me that people today don’t know we’re a church.”

For a time, Greer’s parents were directors of The Salvation Army shelter that once operated here. Now, other nonprofits such as Greenwood Pathway House and Faith Home provide some services the Greenwood Corps previously did.

“Those needs are being met very well, so The Salvation Army here phased out the shelter program in Greenwood,” Hughes explains. “Right now, fortifying our social services is a priority. With COVID-19, rent, mortgage and utility assistance is a tremendous need and that’s our main focus. ... We’ve grown now, to the point where we actually serve five counties — Greenwood, Abbeville, Laurens, McCormick and Saluda.”

Assistance with rent, mortgage and utilities vary from county to county, Hughes said.

“If there’s a need, The Salvation Army fills it,” Smith said. “For all that they do, The Salvation Army’s people are incredible. ... When you first think of Salvation Army, the majority of people, you think, the thrift store and red kettles. It is so much more. That’s what this exhibit is trying to do.”

From being one of the founding service organizations to make up the United Service Organizations (USO), and even opening a grocery store in a Maryland food desert, The Salvation Army has been here and abroad, Smith said, with one serving almost every United States ZIP code.

William Booth, a Methodist minister, and his wife, Catherine, founded The Salvation Army in London, England in 1865.

The Salvation Army...Did You Know?

What: "The Salvation Army...Did You Know?" an exhibit celebrating the 100th anniversary of The Greenwood Corps.

*Call the The Salvation Army's Pressley Street office in Greenwood at 864-229-3407, Mondays at 8 a.m., to schedule an appointment regarding financial assistance.

*Food services are offered Mondays, Tuesdays, Wednesdays and Thursdays, 9 a.m. to noon and from 1 to 4 p.m.

*Clothing, furniture and household good vouchers are available Mondays, Tuesdays and Thursdays from 9 a.m. to noon.

*Volunteers needed year-round to pack bags of food and also to sort clothes at The Salvation Army Family Store.