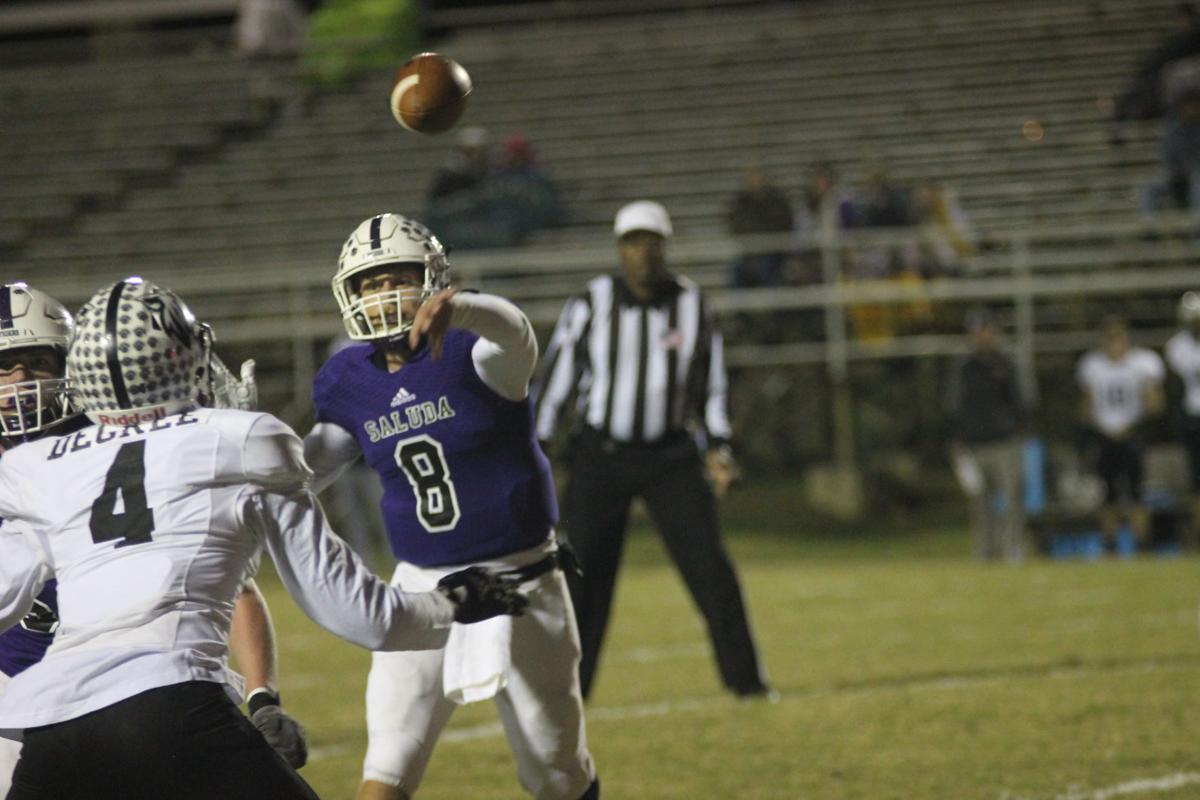 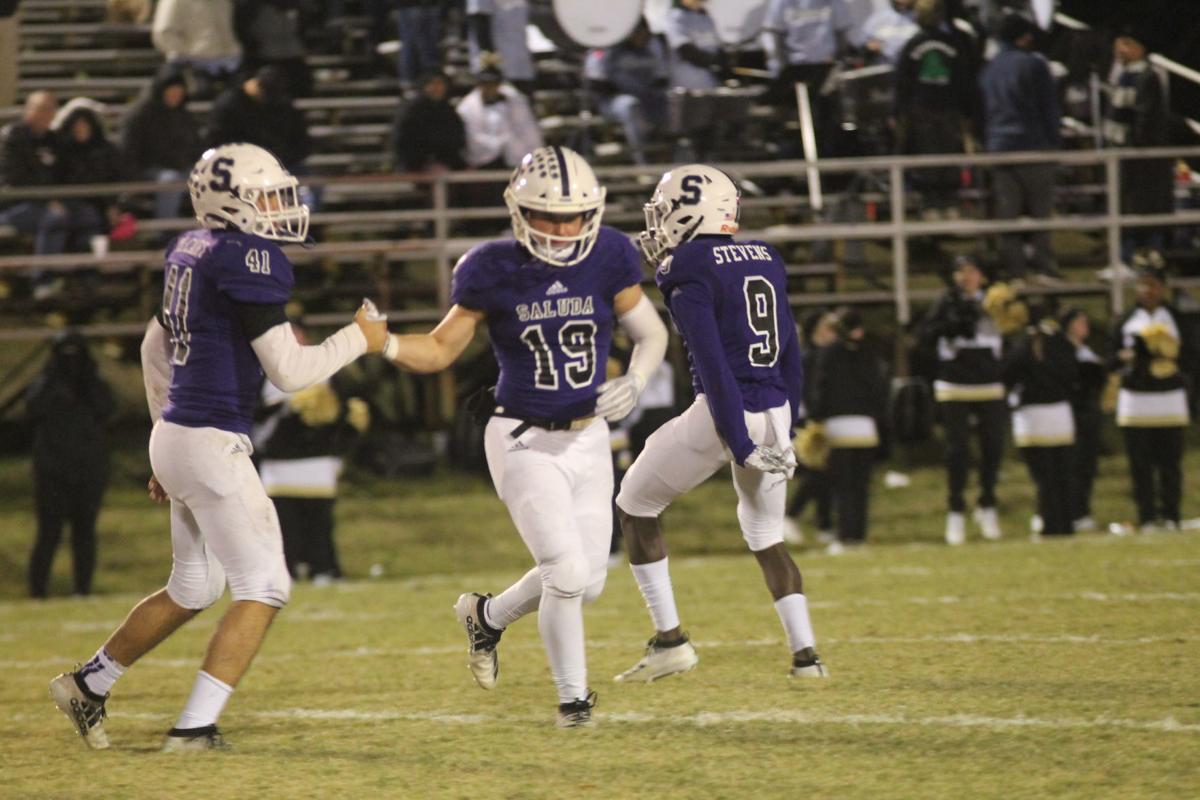 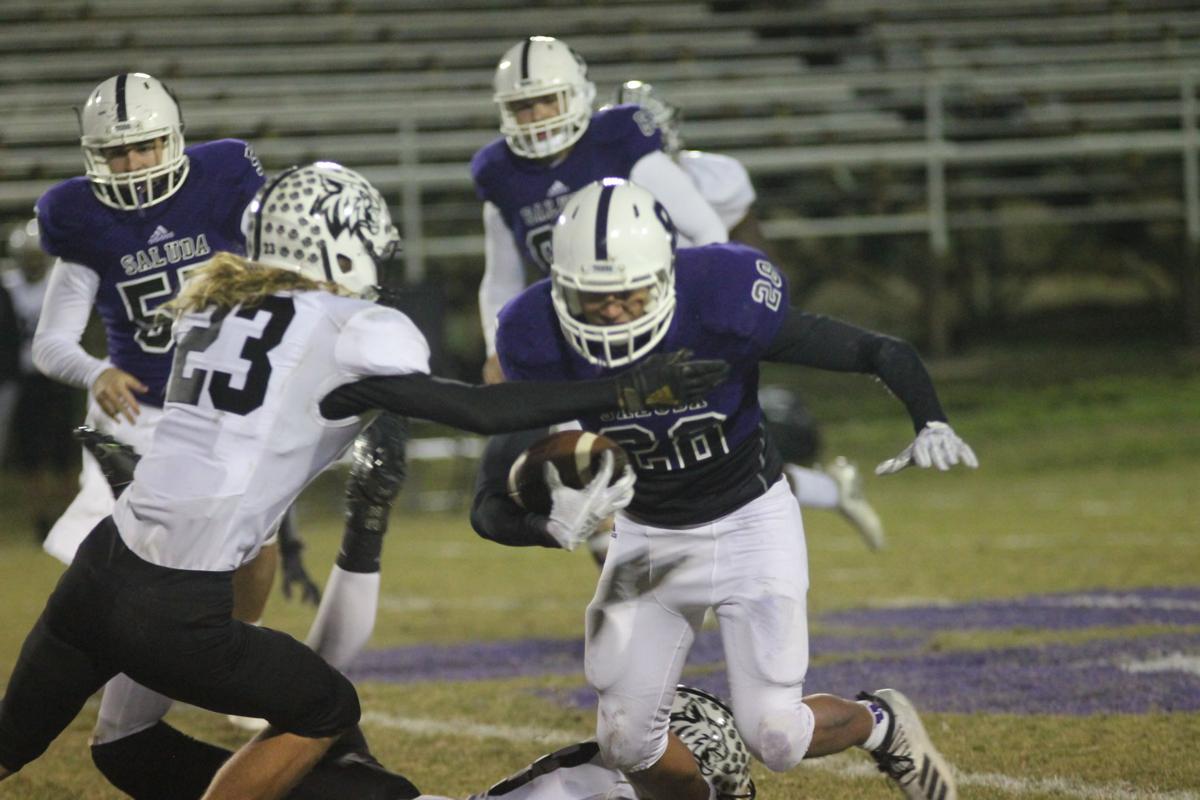 Saluda running back Krishon Mathis carries the ball during a first-round playoff game against Blacksburg.

Saluda running back Krishon Mathis carries the ball during a first-round playoff game against Blacksburg.

SALUDA — Dallan Wright’s impact was immediately felt in his return to Saluda’s offense.

The standout senior wide receiver returned to the field for Friday night’s first-round matchup against Blacksburg, and he provided an instant jolt for the Tigers.

Senior quarterback Noah Bell connected with Wright on three touchdown passes in Saluda’s 42-6 win over Blacksburg in the first round of the Class 2A state playoffs. The Tigers had a dominant showing in the first half, as Bell threw for five touchdowns and Alkamus Johnson recovered a fumble for a 15-yard score on defense.

Saluda had all of its key players back on the field against Blacksburg. Along with Wright, the Tigers also missed two key defenders in last week’s loss to Batesburg-Leesville.

“We had all of our pieces to the puzzle back,” Saluda coach Stewart Young said. “We were missing a couple of guys last week. We got those guys healthy, and it showed.”

Wright opened the scoring when he caught a 3-yard dart from Bell on the team’s opening drive. He scored two more touchdowns in the second quarter to help Saluda take a 42-0 lead into halftime.

All three of Wright’s catches were for touchdowns. He finished with 41 yards.

“Getting Dallan back helps a lot, because he’s one of the best receivers in the state,” Young said. “It puts another element to the offense, because they can’t really sit back deep. It just really opens up the offense.”

Bell’s other two touchdown passes were to senior wide receiver Jervon Whitt, who finished with a team-high 74 yards receiving.

The Tigers entered the game with a sense of urgency to get back on track after two consecutive losses for the first time since 2015. After getting healthy during the week, Saluda felt prepared to bounce back, and it did just that.

“It was well-needed,” Bell said. “The past two weeks were kind of rough, but this was definitely a confidence booster. We feel good. It’s a long road to the state championship, but we just need to go 5-0. We started 1-0 tonight, which is a really good start.”

Saluda’s defense forced two turnovers in the first half. Darius Cleveland intercepted a pass in the second quarter before Johnson’s fumble recovery for a touchdown came later in the quarter. The Tigers also forced a fumble in the second half.

Saluda will head on the road in the second round to face No. 1 seed Buford, which defeated C.A. Johnson 43-34. Young said he was proud of his senior class’ effort in what could have been its final home game at Bettis Herlong Stadium.

“You’ve got to be proud of their effort,” Young said. “This may be their final game here, and they treated it like that. They came out and answered the bell, so I’m very proud of them. We get to move on, so I’m very excited about that.”

Next game: 7:30 p.m. Friday, Saluda at Buford (second round of Class 2A state playoffs)

Australian Open Glance: Nadal-Thiem QF could be a long one