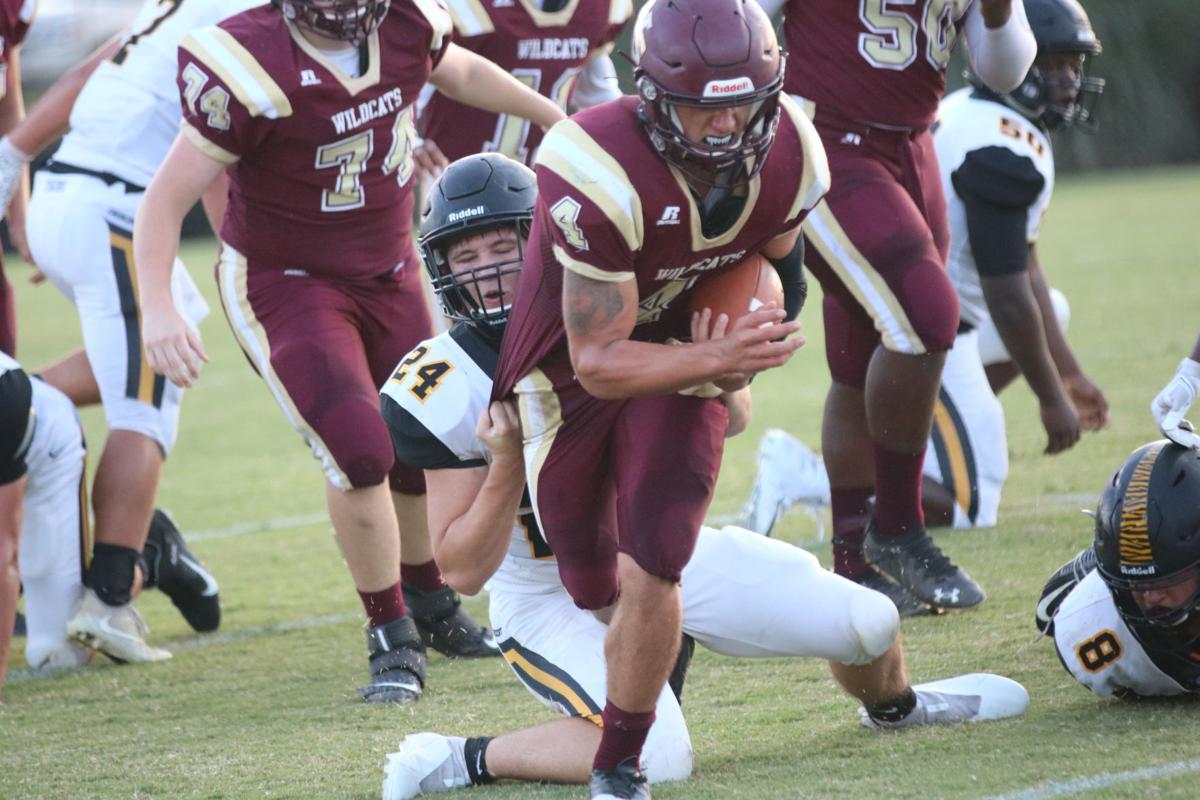 Ninety Six senior running back Justyn Gonzalez is tackled by a Crescent defender during a game. 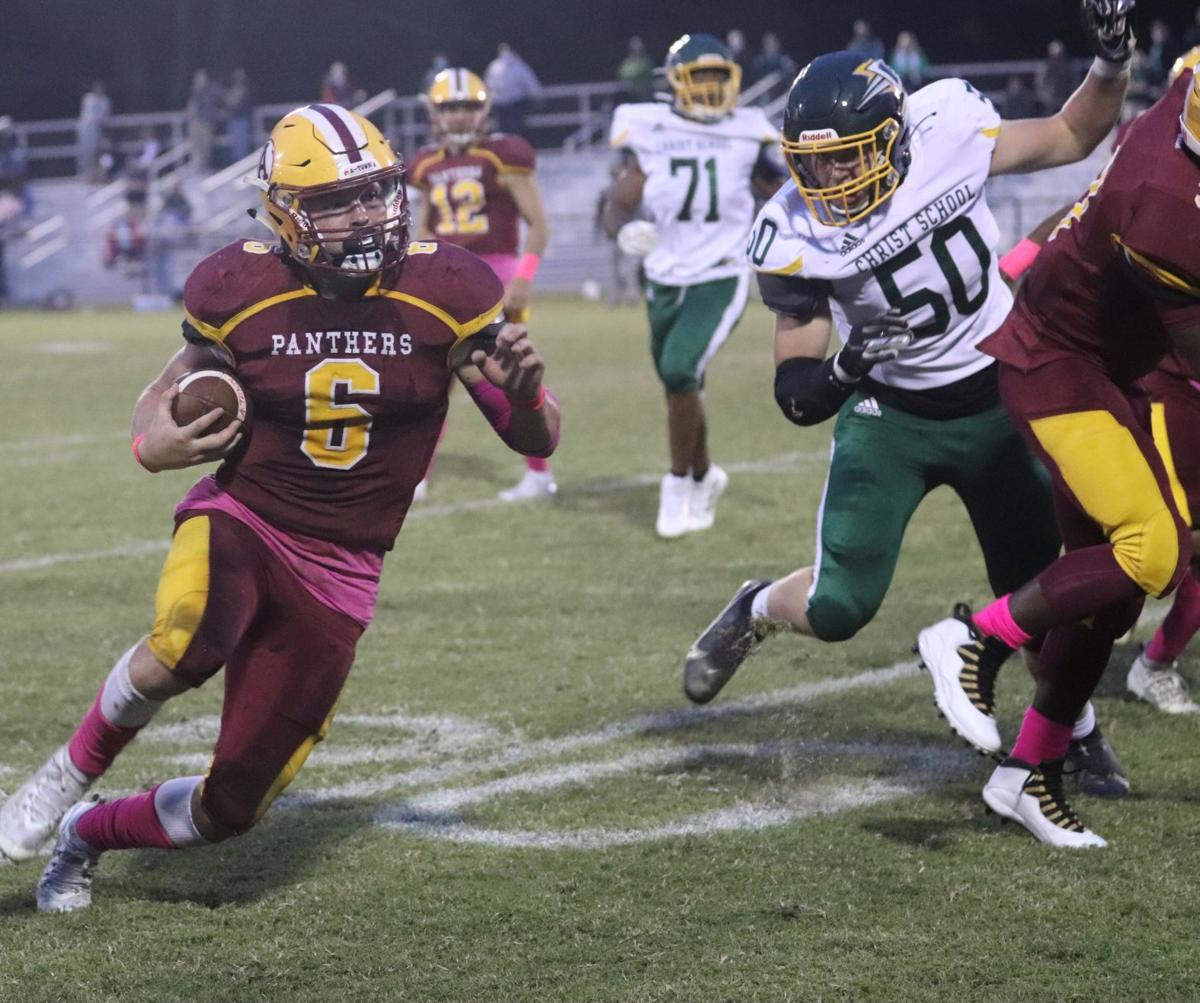 Abbeville running back Cruz Temple cuts the corner on a run during last Friday’s game against Christ School.

Ninety Six senior running back Justyn Gonzalez is tackled by a Crescent defender during a game.

Abbeville running back Cruz Temple cuts the corner on a run during last Friday’s game against Christ School.

Teams hope to schedule easy games for homecoming. Ninety Six doesn’t have that luxury this week.

The Wildcats host No. 1-ranked Abbeville at 7:30 today in a Region 1-2A matchup.

With just the top two teams from each region making the playoffs – because of the COVID-related abbreviated season – every region game is critical.

“Well, we’ve had a successful non-region schedule,” Abbeville coach Jamie Nickles said. “Now it’s time to turn the page and let the journey begin. We have a tough opponent on Friday night. I’m very impressed with Ninety Six. Their offensive line is outstanding and their defensive line is rock solid.”

The Panthers (3-0) are coming off a dogfight victory against North Carolina powerhouse Christ School. This will be their region opener. The Wildcats (1-2) picked up their first region win last week against Liberty.

“We just about beat ourselves all three games so far this season, so our focus is fixing us and not letting that happen anymore,” Ninety Six coach Matthew Owings said. “It’s just unfortunate that we started 0-2 in region play and weren’t able to fix our issues before. Even though all three games so far haven’t gone our way for whatever reason, the best thing is that our players haven’t quit or gotten too down even though they know that we had a great chance to be 3-0 right now if we didn’t have so many self-inflicted wounds.”

Both teams rely heavily on the running game. Abbeville, which runs the A-Bone formation, which is a shotgun hybrid of the Flexbone, has racked up 916 yards so far on the ground, with four running backs evenly spreading the wealth.

“It’s not that the A-Bone itself is that tough to crack, but when you have all the players like they have it makes it very difficult no matter what offense or defense you run,” Owings said. “Our staff put together a good game plan, and now we have to get our team ready to make it work the best we can.”

Owings, who is in his second year coaching the Wildcats, said this game is no different from last year when the Panthers were ranked No. 1.

“The objectives and mindset shouldn’t change any week of the season no matter who we are playing or what rank they are,” he said. “We have to take care of us because that is all we can control, and each week have the mindset of doing our best to go 1-0 that specific week whether we are playing the No. 1 team or the worst team in the state.”

Nickles said he has been impressed with the Wildcat running back tandem of Michael Cato and Justyn Gonzalez. Cato, who also plays linebacker, is the leader on defense, Owings said.

Cato rushed for more than 200 yards last week against Liberty and also had 11 tackles. Jordan Wright, an offensive and defensive lineman, is the senior leader up front. Martavis Masion (OL/DL) is a sophomore captain who started both ways for the Wildcats as a freshman in 2019.

“If we don’t tackle well, they’ll rush for 10,000 yards,” Nickles said. “I thought that the other night we did a good job of gang tackling, but we missed some tackles.”

Injuries have plagued the Wildcats.

“We are counting on a small group of men to battle the whole game and find a way to win with having to play almost every snap on both sides of the ball,” Owings said. “I expect to see us play a cleaner game than we have the previous three and to play our tails off the entire game.”

Ninety Six has 11 turnovers through three games, while the Panthers have forced 13 turnovers. Abbeville defensive back Javario Tinch has three of the team’s eight interceptions.

Wingbacks Navi Marshall and Tyrell Haddon get a bulk of the carries on Abbeville sweeps, while J’Marion Burton generally runs between the tackles as a fullback who lines up beside quarterback Thomas Beauford in the shotgun.

Burton has gotten most of the carries instead of Martico Jackson, who played that role extensively last year. Jackson has been needed on defense, but he should get more touches this week.

“It makes you more multiple when you have that many different people carrying the ball,” Nickles said.

Abbeville defensive back Jeremiah Lomax has been solid in the secondary, and linebackers Cruz Temple and Luke Evans have shined in the middle of the defense. Temple also sees time in the offensive backfield.

About the game: This is an important Region 1-2A game for both teams. Abbeville is averaging 51 points per game while allowing just 7. The Panthers are ranked No. 1 in Class 2A. They've amassed 916 yards rushing in their three wins. Ninety Six picked up its first win of the season against Liberty last week. Running back Michael Cato has been impressive for the Wildcats. Keep an eye on turnovers. Abbeville has forced 13, and the Wildcats have committed 11.