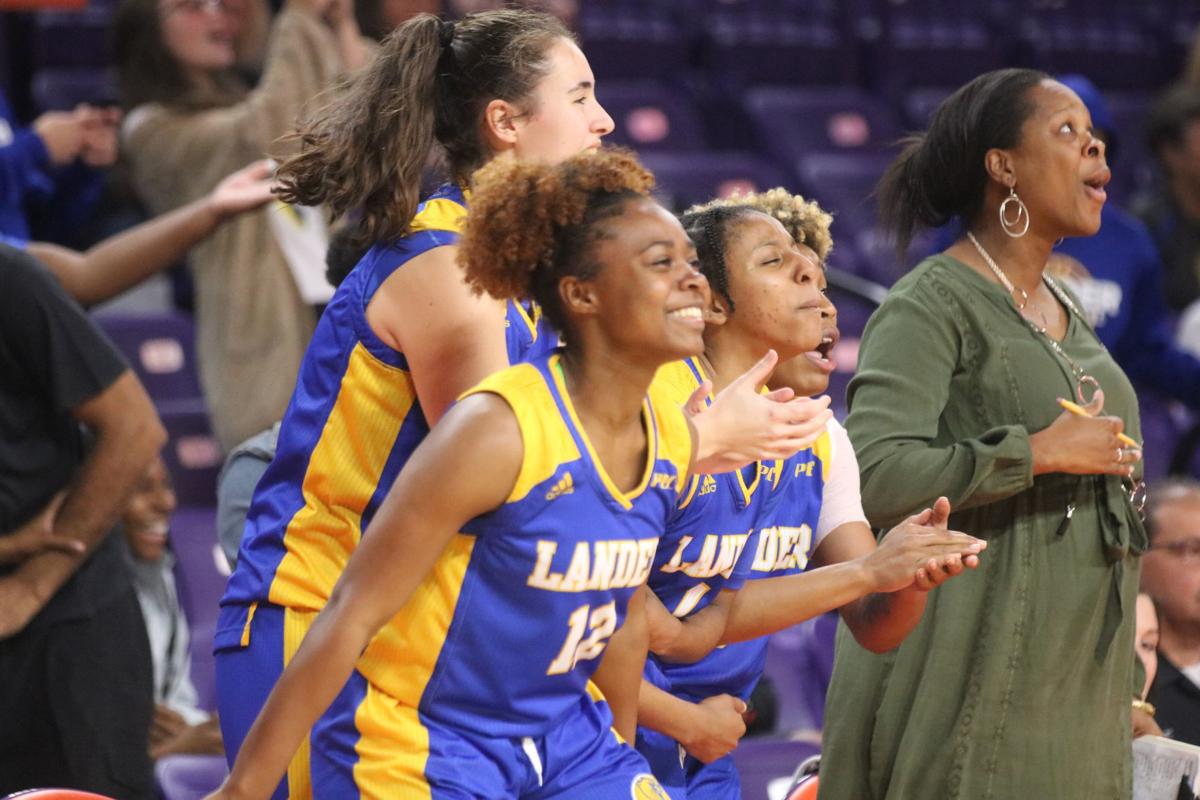 Lander players celebrate from the bench during the fourth quarter of the Bearcats’ exhibition win against Clemson. 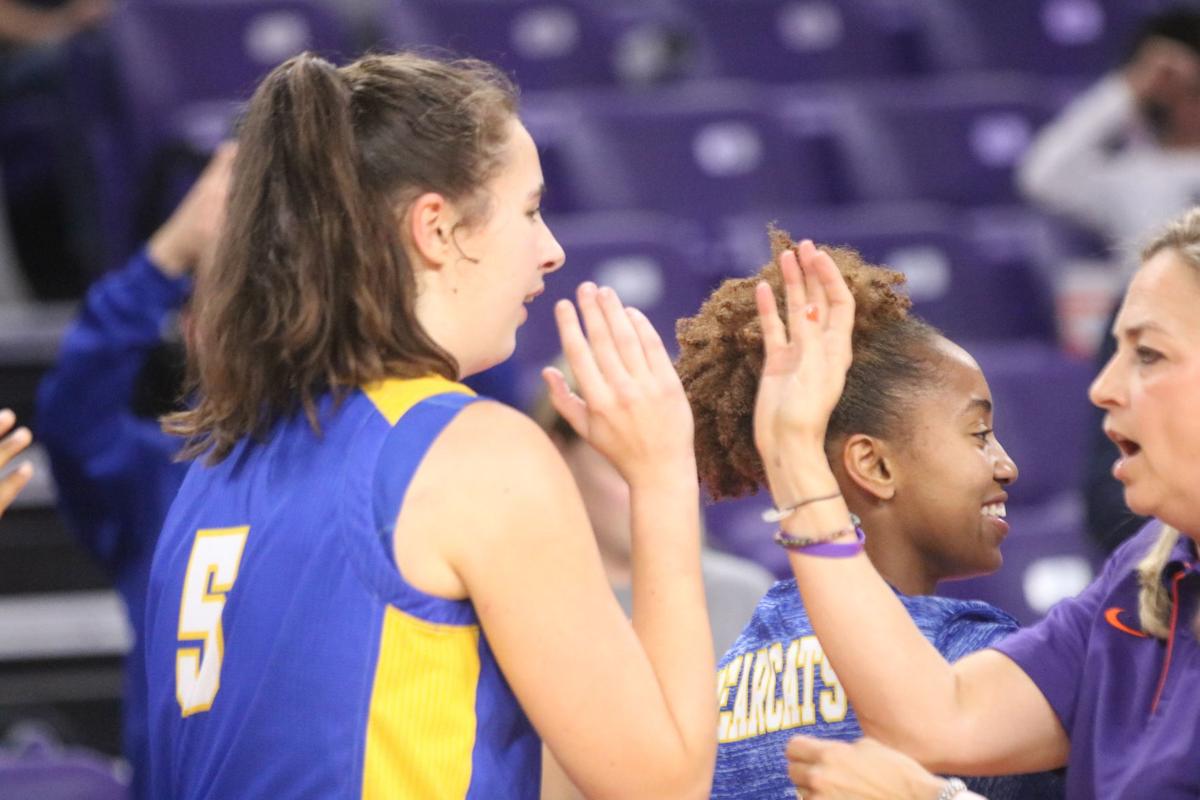 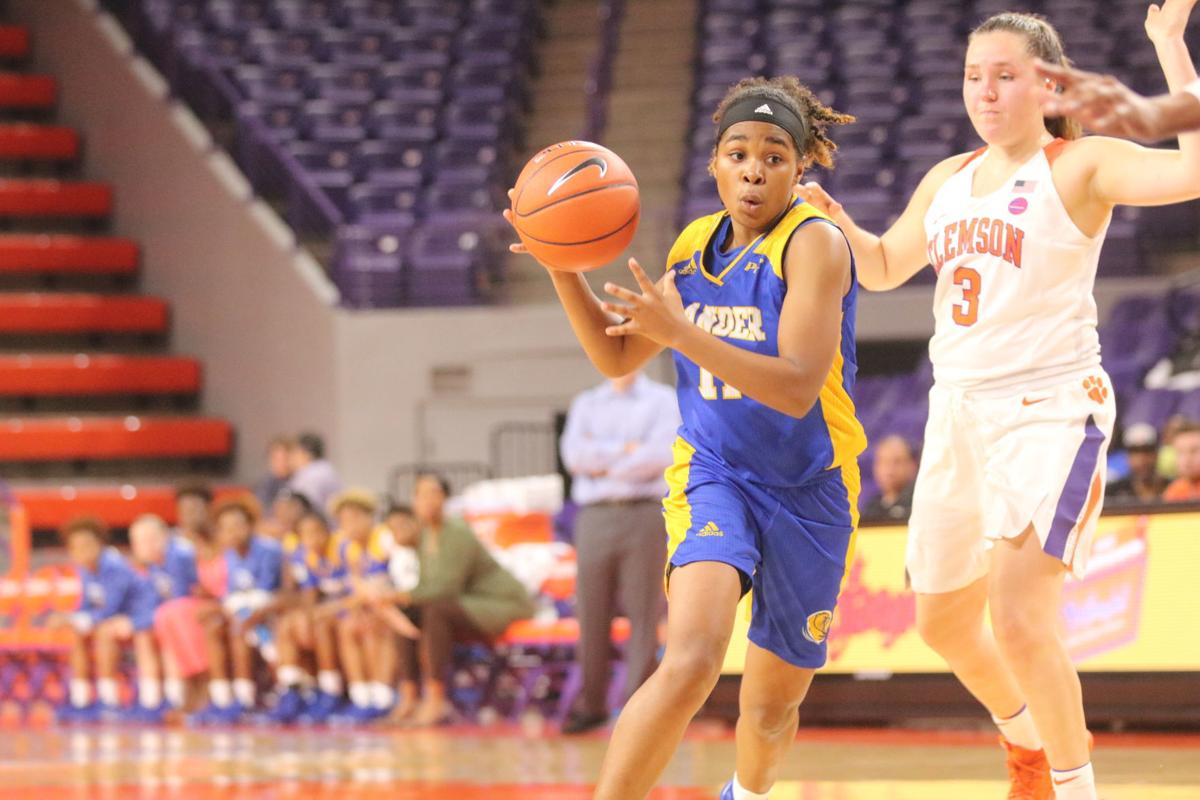 Lander freshman Zamiya Passmore drives into the lane during the Bearcats’ 74-72 exhibition win against Clemson. 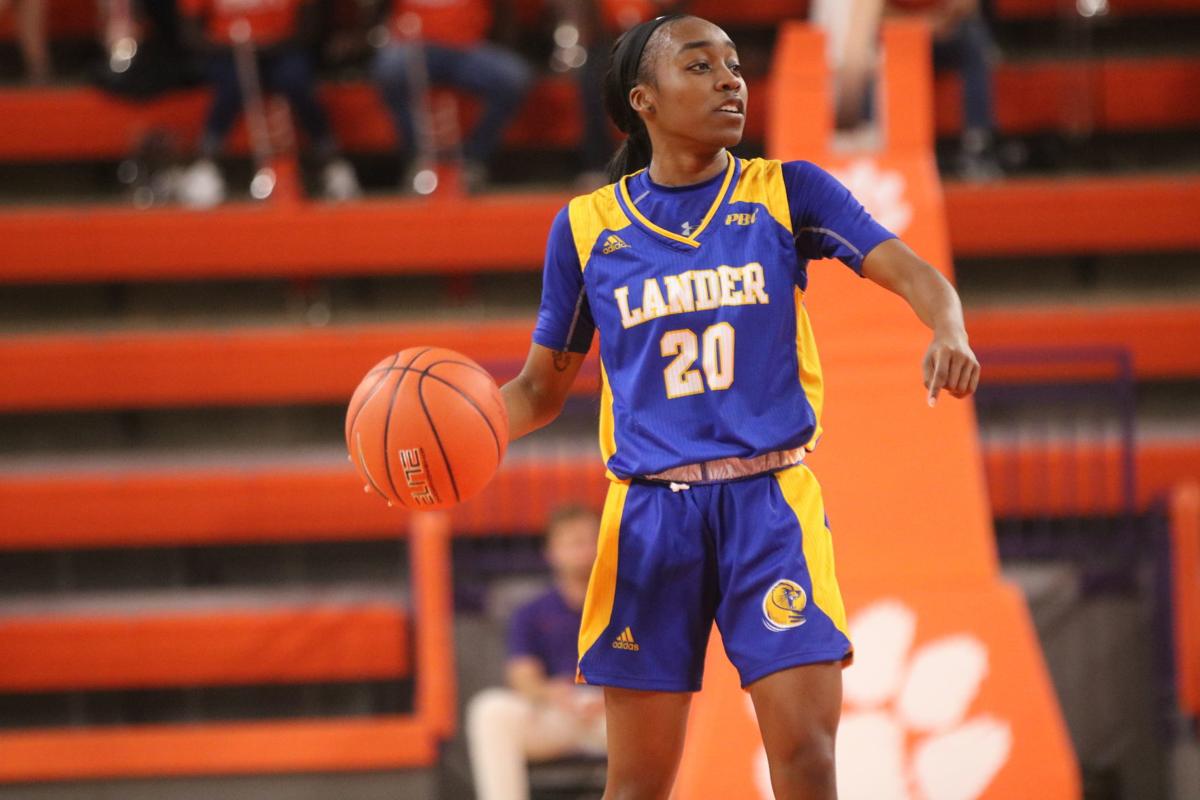 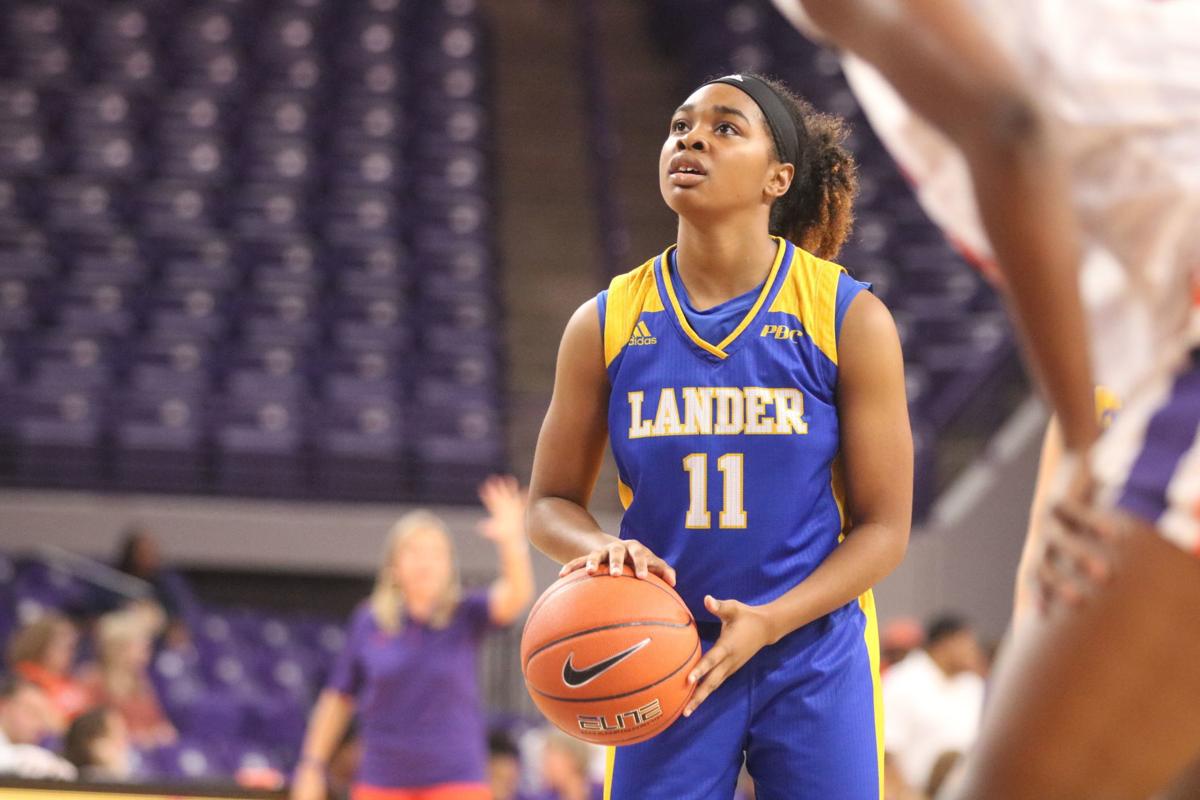 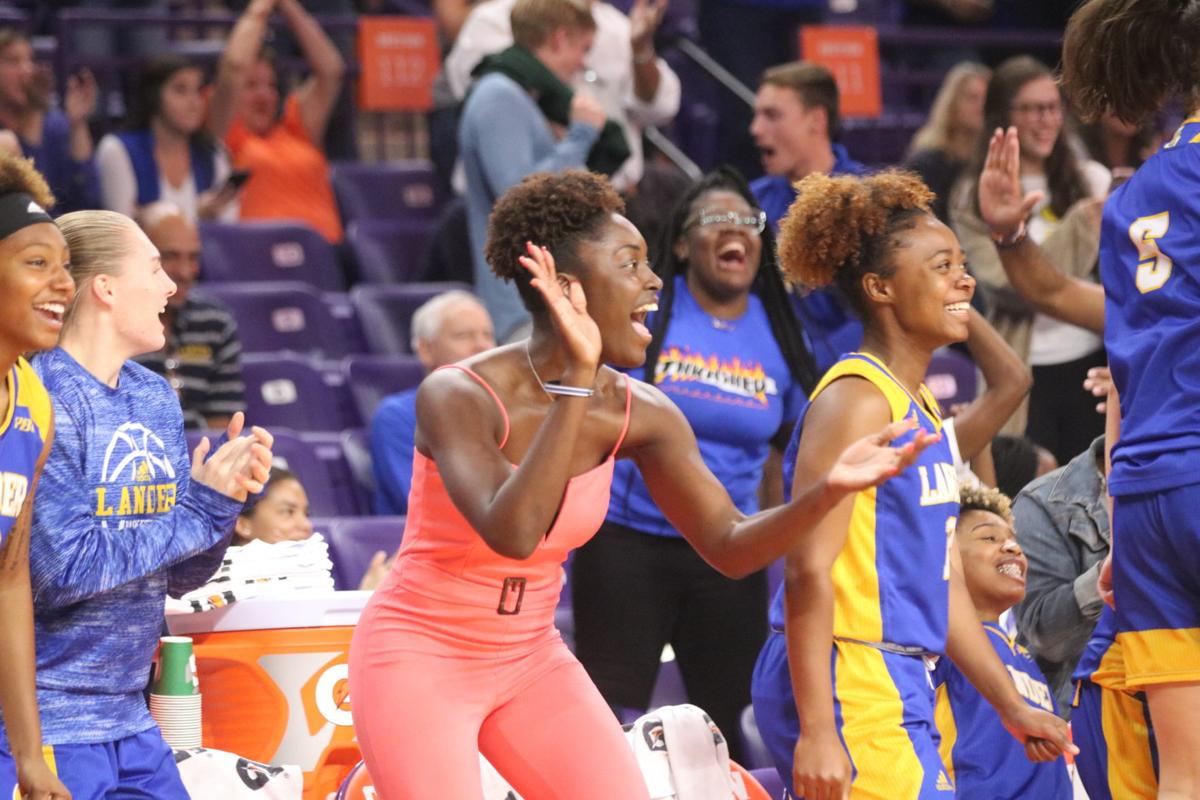 Lander volunteer assistant coach Breshay Johnson celebrates from the bench during the fourth quarter of the Bearcats' exhibition win against Clemson.

Lander players celebrate from the bench during the fourth quarter of the Bearcats’ exhibition win against Clemson.

Lander freshman Zamiya Passmore drives into the lane during the Bearcats’ 74-72 exhibition win against Clemson.

Lander volunteer assistant coach Breshay Johnson celebrates from the bench during the fourth quarter of the Bearcats' exhibition win against Clemson.

CLEMSON — Lander stormed back from a 14-point deficit to force turnovers and shock Clemson in a 74-72 exhibition win Tuesday at Littlejohn Coliseum.

Lander sophomore Miriam Recarte hit a buzzer-beater to win the game, capping a 19-5 run by Lander in the last four minutes.

Lander coach Kevin Pederson, a Clemson graduate, said the win will be remembered for a long time among the team's players and coaching staff.

"We got some smaller kids, but there's a lot of skill and a lot of fight in these kids," Pederson said. "Right now, I'm just really happy to see them get a win against an ACC team."

"It’s a win that we will have together as a group and as a family that 10 years from now is really going to be special."

Tied at 72 in the final minute, Lander took a 3-pointer that missed and a rebound fell to sophomore Sarah Crews, who tossed the ball back to Recarte.

Recarte's rushed 2-pointer hit the net as soon as the buzzer sounded. Lander's players piled onto her in celebration.

"I said, 'We'll go to you, you're the kid'" Pederson said of Recarte, recalling her clutch performances in last year's NCAA tournament. "She's got the mentality and she's got the skill."

Harris said the Bearcats' pace allowed them to overcome the size difference.

"We just kept playing. We just attacked them," Harris said. "Even though they were bigger than us, we feel like we are fast and we’re a very fast team. we just went out and showed that today."

Pederson put Passmore in the starting lineup and said after the game that he thinks she can be one of the best freshman in the Peach Belt this season.

The Bearcats trailed by 12 points with 4:42 left in the game. Then, the Bearcats drew fouls on two made layups in a row and Jessica Harris made a 3-pointer to narrow it to four points.

Another 3-pointer from freshman Mikaila Cange and a layup by Harris brought Lander to a 70-67 lead. Clemson tied the game with a 3-pointer, but Lander responded to tie the game at 72 before Recarte's buzzer beater.

Pederson was considered for the Clemson women's basketball head coaching job when it was open in April 2018, but current Clemson coach Amanda Butler was hired. Since then, Pederson led Lander to a second-place Peach Belt finish and a Sweet 16 appearance in the Division II NCAA tournament.

Pederson was complimentary of Butler for working with Lander in hosting the Bearcats for this season's exhibition.

"But we're appreciative for Amanda giving us the game. I said I got two schools I care about. That’s Clemson and Lander. I got my Bearcat on, but I also have my little ring with the Clemson Tiger paw on it."

Lander begins the 2019-20 season Friday, Nov. 8, against Lenoir-Rhyne. Pederson acknowledged that Tuesday's exhibition win won't mean anything for the Bearcats' regular season, but anticipated that it will raise expectations for other teams in the Peach Belt.

"We were not the best team in the Peach Belt last year, and this doesn't mean we're going to beat Lenoir-Rhyne," Pederson said. "But hopefully this is something that other D2 teams can look at and say ‘Hey, good for them.’"

The Latest: Trump to establish 'National Garden' of heroes

Groups call for meetings as US lab preps for weapons work