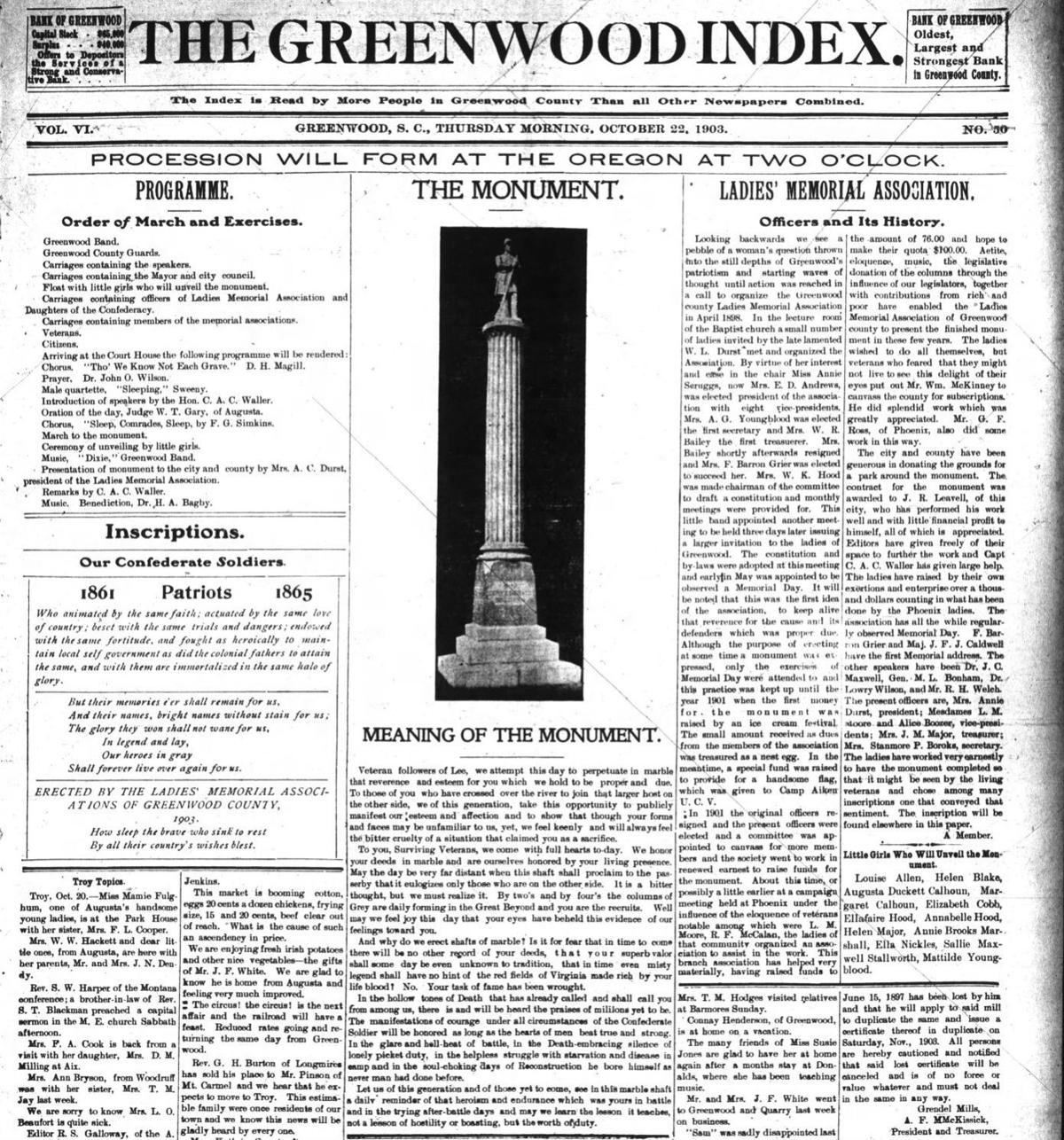 The Greenwood Index took what was then a rare step by printing a photo of the Confederate monument at the Greenwood County Courthouse on Oct. 22, 1903.

”Who can now declare what was the mission of the Confederate States of America?”

The Honorable Judge William T. Gary of Augusta, Georgia posed the question during the unveiling of Greenwood County’s Confederate monument just after listing what he saw as the historic roles of Jews, Greeks and Romans. He then answered the question for the thousand or more who came to hear his keynote speech outside the county courthouse:

“We know that God works in a mysterious way His wonders to perform. We know that no nation ever rose more pure and fair, and none was ever more free from crime. We know that patriotism and heroism and bravery were never fully illustrated until the Confederate soldier made the name of Robert E. Lee immortal.

“We know that Christian civilization has successfully penetrated the jungles of Africa, and the descendants of many of the savages who were transported to the South have been taught to know God. We know that the highest type of Anglo-Saxon manhood and of Anglo-Saxon civilization may be found in the states of the South. We know that might does not make right, but its jurisdiction is limited to the effect of strategy and the power of numbers. Are we not justified in believing that it is the destiny of Christian civilization to proclaim liberty to the world, reveal the religion of love, and inspire in mankind the respect for the laws of God?

“Are we not justified in believing that our people are chosen instruments in the hands of an all-wise Providence?”

This is not the only mention of race in Gary’s speech. Earlier, he boasted that while the Confederacy was short-lived, “We know that its influence is now felt, and that it will continue to perpetuate the cause of human liberty so long as Anglo-Saxon civilization survives.”

He also said the Confederate soldier “redeemed his State and forced the enemies of constitutional liberty to recognize the principle for which he fought,” referencing the violent end to Reconstruction in South Carolina that saw political assassinations and attacks at polling places effectively end African American participation in elections for decades to come.

Gary made sure to praise the women who supported the Confederacy and the monument, as did subsequent speakers. While not explicit within this presentation, it was common for white Southerners to mention the purity of their women and the need to protect them from African American men. Coincidentally, some of the same people who listened to Gary likely participated in the 1906 lynching of Bob Davis, a Black man accused of trying to rape a white woman. The episode made national news as Gov. Duncan Hayward came to Greenwood County and pleaded unsuccessfully with the mob to instead have a trial for Davis, offering to provide the rope if the man was found guilty.

This speech was neither obscure nor subtle. For those who missed Gary’s address, they needed only pick up the Oct. 29, 1903 edition of The Greenwood Index to catch every word. And it doesn’t take a divining rod or an advanced understanding of the period to understand the hierarchy of racial superiority the orator offered to the gathered masses.

However, for a number of people reading this, these words seem foreign and don’t ring true to the history you were taught in school. That’s because winners write history, and while the Confederates lost the Civil War, Southern culture persisted through Reconstruction and white Southerners worked to reshape how people understood the conflict and the dominance of white supremacy during the Redemption period.

Part of that revision was raising monuments such as the one that stands at the Greenwood County Courthouse as a way to mythologize the war and its causes and to perpetuate white supremacy. That cultural movement also spawned D.L. Dixon’s “The Clansman,” a 1905 novel and play that romanticized the Ku Klux Klan’s terrorizing of African Americans in the wake of the Civil War. The organization, dissolved through federal intervention in 1871, was reborn 1915 when the book became the movie “Birth of a Nation.”

Southern historians spent decades recrafting the post-war years, with educators embracing texts filled with widely accepted portrayals of the region’s history even when they distorted or omitted some truths. While modern historical texts seek to correct omissions and untruths, the taught misperceptions from classrooms of the past make it difficult to publicly grapple with uneasy corners of our history.

In this case, the history of a statue.

To the Greenwoodians of 1903, this lone sentry stood watch as a testament to the supremacy of Anglo-Saxons while reminding the sons and daughters of former slaves who ventured within eyeshot of the courthouse the terror they would face if they angered whites.

Still atop his pedestal, he stands there today.

And the shadow this confederate casts can still be seen by all who seek justice or face judgment at the courthouse — including the nearly third of county residents who are Black.

Contact Assistant Editor Matthew Hensley at mhensley@indexjournal.com or on Twitter @IJMattHensley. Views expressed in this column are those of the writer only and do not represent the newspaper’s opinion.

Cubs 1B Anthony Rizzo dealing with back trouble

AP sources: About 10 MLB umpires opt out over virus concerns