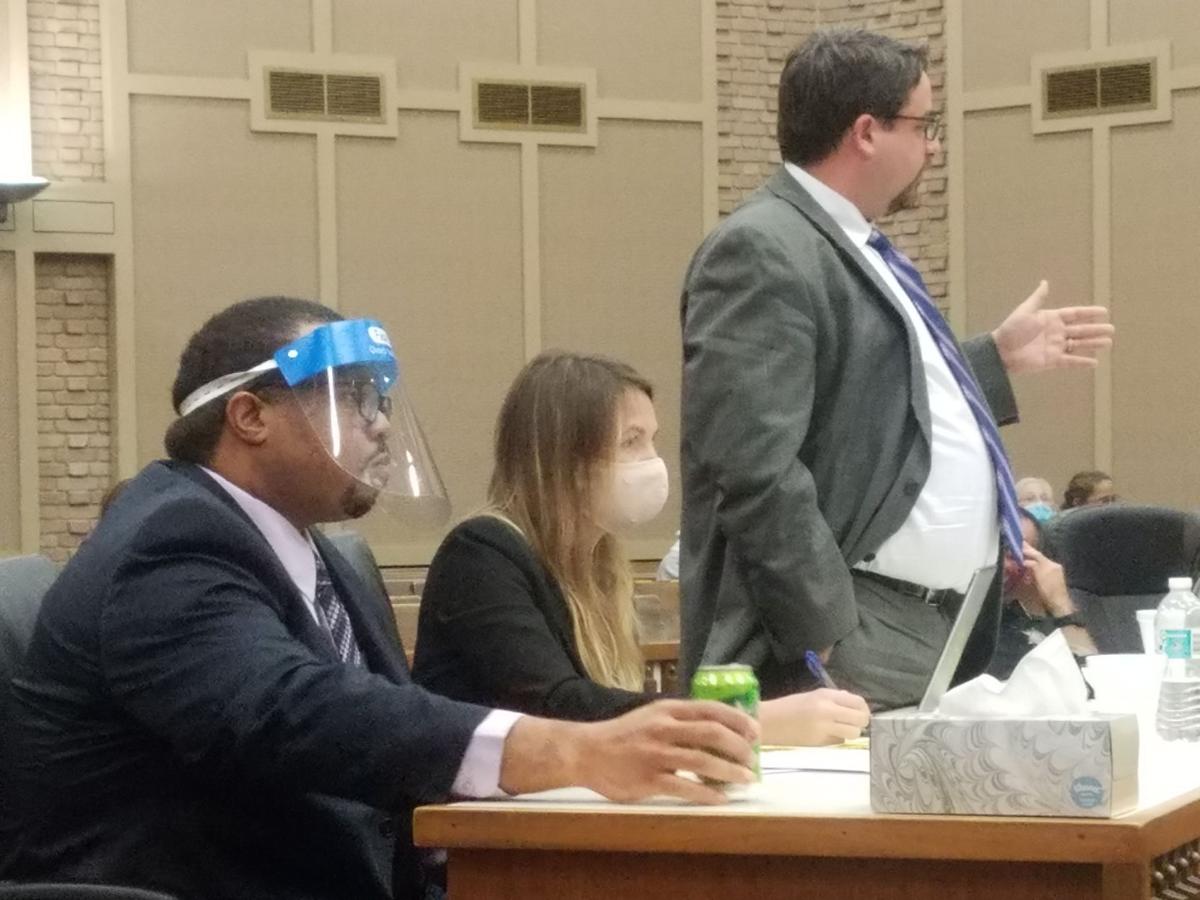 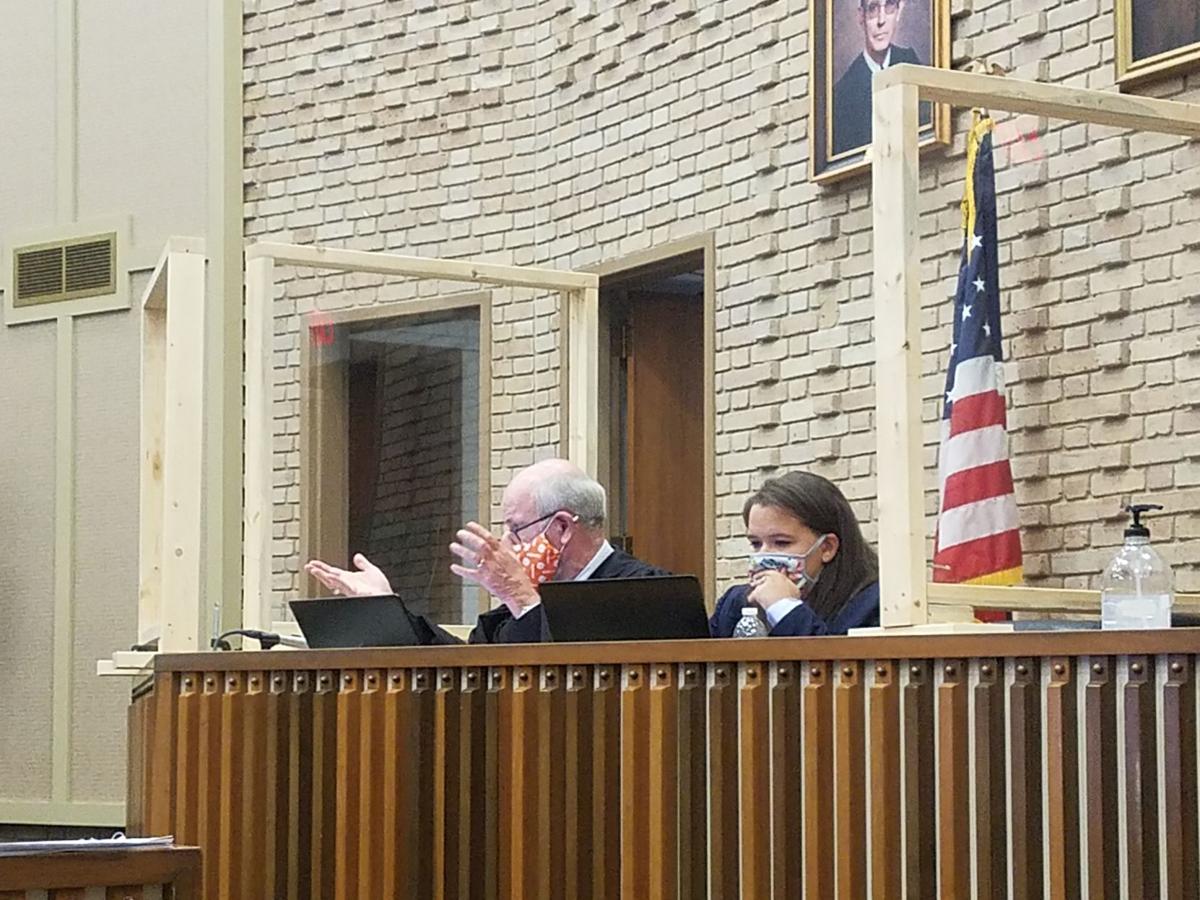 COVID-19 safety precautions were put in place for the trial, including these clear dividers placed between Judge Donald Hocker and the witness stand.

COVID-19 safety precautions were put in place for the trial, including these clear dividers placed between Judge Donald Hocker and the witness stand.

A Ninety Six man was found guilty of murder at the end of the ninth day of a trial over the 2019 slaying of an Aiken man.

Mark Anthony Hailey Jr. was 32 when he was arrested March 6, 2019 and charged with murder and possession of a weapon during a violent crime. His mother called 911 that night saying her son might have been involved in a shooting on Warner Road, and officers searching that area found the body of Marty Anthony George there, dead from a gunshot wound to the head.

Warrants said Hailey and George were in a vehicle on Warner Road that morning, when Hailey shot George in the head, put his body in a roadside ditch and drove the vehicle to his home, where his mother was.

But attorneys painted differing pictures of the events to the 12 members of the jury Wednesday in their closing arguments.

Eighth Circuit Deputy Solicitor Yates Brown, who prosecuted the case alongside Assistant Solicitor Anna Sumner, defined the elements of murder, including the requirement of malice before the crime.

He painted for the jury a picture of Hailey loading the break-barrel shotgun used to kill George and said the circumstances of the case didn’t support the idea that Hailey was defending himself from George. Although there was a pellet handgun near the shotgun in the vehicle that George grabbed and waved around, Brown told the jury Hailey had loaded the shotgun before then.

He played body camera video from an officer who responded to Hailey’s mother’s 911 call, and in it, Hailey is crying and barely able to speak. He said to an officer “Something happened tonight.”

“I don’t know what happened, but I know I hurt that man,” Hailey said in the video.

In the video, Hailey tells officers George was at Warner Road, and he referred to him as “brother.” He also talks about seeing things and hearing a sound he’d never heard before that led him to Warner Road.

Brown explained some witnesses, including Hailey’s mother, assumed he was on drugs because of his behavior. A medical expert called to the stand an earlier day testified she didn’t think drugs or mental illness played a role in the events of that night, and Hailey was found competent to stand trial.

“This case is built on assumptions,” Shaffer said. “His mom and aunt assumed he was high. The cops couldn’t figure out what happened, so they assumed it was murder.”

He played video from an officer’s dashboard camera, showing the dark, rural stretch of road the two men were going down at the time of the shooting. He spoke over it, airing concerns that George was giving Hailey a ride home, but wasn’t going the right way. With the lights off in the courtroom to mimic the darkness, Shaffer pulled out the pellet gun in evidence and pointed it out.

He said George pointed the BB gun at Hailey.

After hearing the arguments, the jury was given three charges to consider: Murder, carjacking and possession of a weapon during the commission of a violent crime. They began deliberations at about 4:12 p.m. and sent notes out asking questions through the evening.

Hocker said court would reconvene in the morning for a sentencing hearing.

Shaffer said the defense would be filing an appeal on behalf of Hailey.

“We believed in our client’s story, and this is a sad day for our client and his family,” McNeill said.

Brown said a lot of work was put into this nine-day trial, not just from attorneys but from law enforcement, investigators and the witnesses and families that cooperated through the process.

“Everyone working together gave a full story of how that night transpired, which ultimately led to a man losing his life for no reason,” he said.

Following a test run in August in Laurens County, Judge Donald Hocker applied his COVID-19 safety plan to the Greenwood County Courthouse in order to have as safe a jury trial as possible amid the ongoing pandemic.

Blue tape marked spaces on the court benches for people to safely distance themselves, and jurors were spread out in seats. Everyone wore masks or face shields during the proceedings, and markers on the courthouse floors direct the flow of foot traffic to avoid crowding.

The court room was sanitized daily. The usual jury room was too cramped, so jurors were moved to the family court room earlier in the trial, but deliberated in the courthouse's grand jury room.

After the verdict was handed up, Hocker took time to seek feedback from each juror on how the process went, and how it could be better refined for future cases.

After nine days in the courtroom and more than a year waiting for justice, the family of Marty Anthony George of Aiken wept as the man found g…