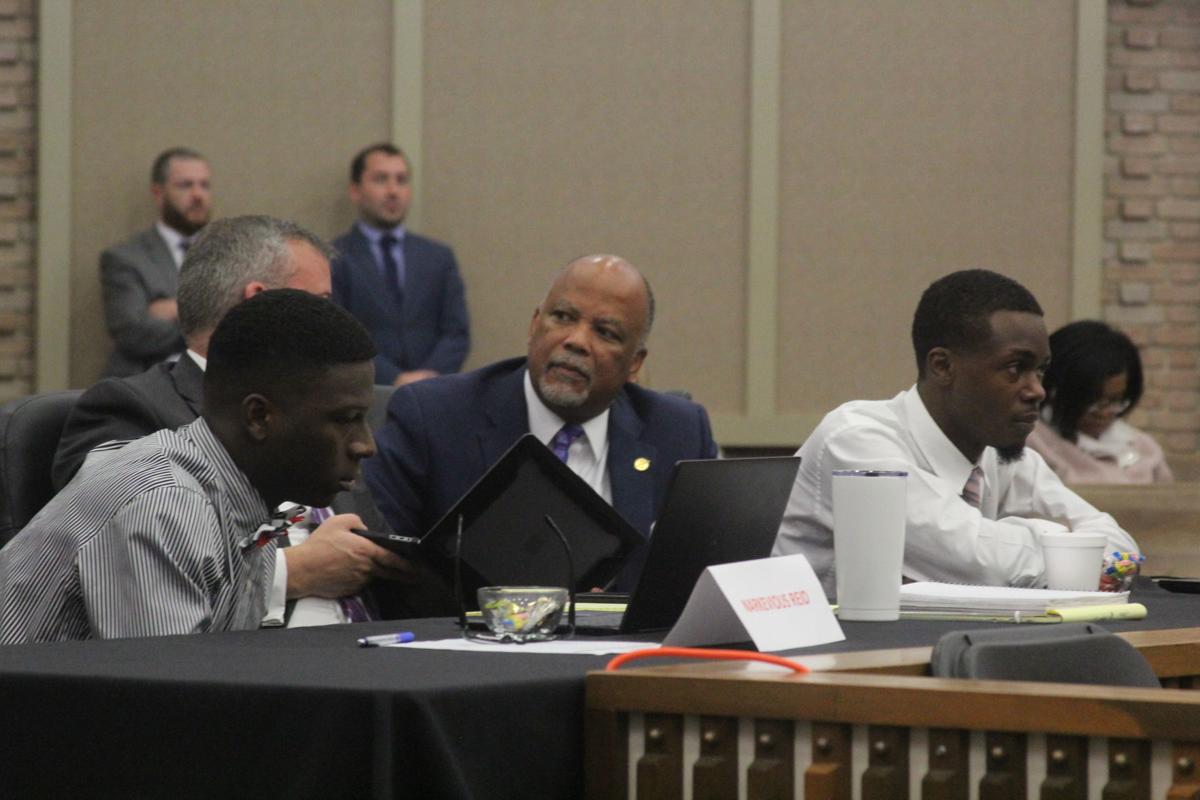 Narkevious Reid, left, and Shyheim Freeman, pictured in this Nov. 21 photo, returned to court Monday, along with the four other defendants in the trial of the Greenwood Mall shooting case. 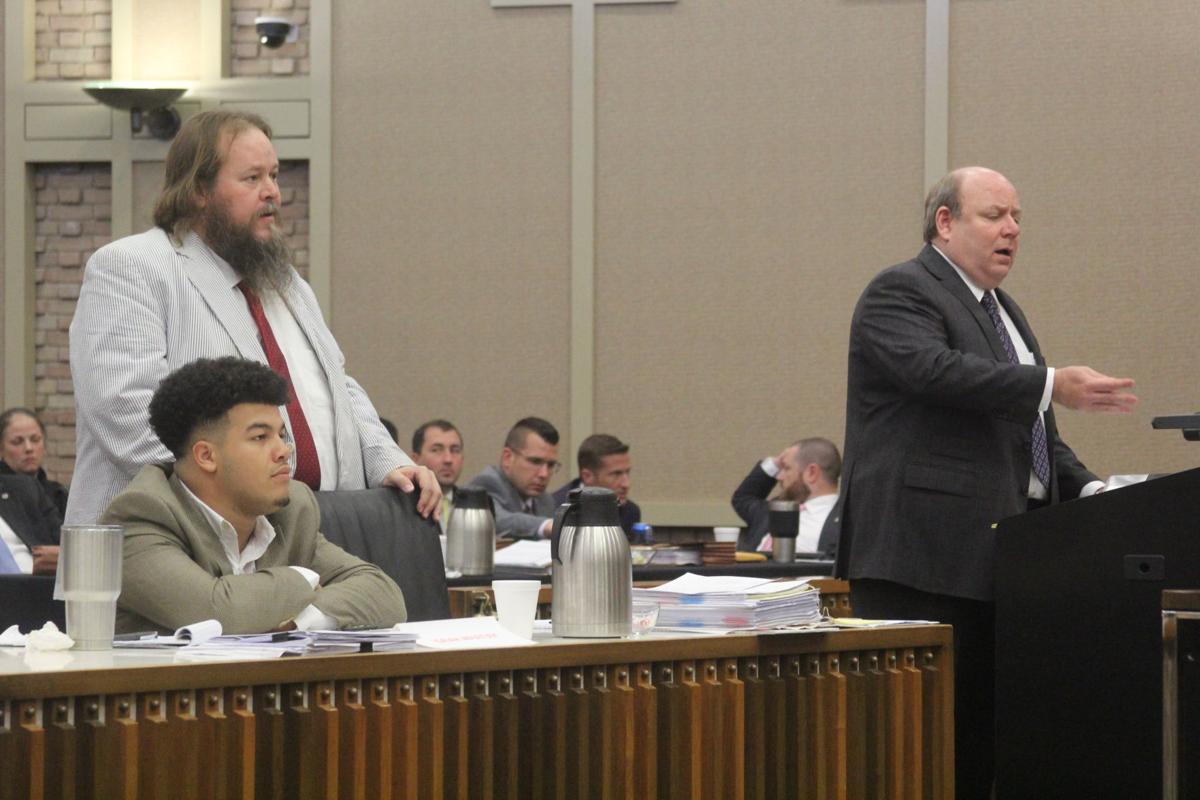 Attorneys Stephen Geoly, left, and Charles Grose stand in court in this Nov. 20 photo of the trial for the 2018 Greenwood Mall shooting case.

Narkevious Reid, left, and Shyheim Freeman, pictured in this Nov. 21 photo, returned to court Monday, along with the four other defendants in the trial of the Greenwood Mall shooting case.

Attorneys Stephen Geoly, left, and Charles Grose stand in court in this Nov. 20 photo of the trial for the 2018 Greenwood Mall shooting case.

Before Monday’s only witness could take the stand in the Greenwood Mall shooting case, attorneys spent about two hours settling on what she could and could not testify to.

Shalonda Calhoun, manager of the Foot Locker at Greenwood Mall, was set to testify about the things she experienced July 28, 2018, when shots were fired in the mall. The six men facing trial are charged with attempted murder, aggravated breach of peace and weapon possession charges. Before the jury could hear from Calhoun, the defense attorneys raised an issue with an element of her would-be testimony.

Calhoun was working at Foot Locker on the day of the shooting, and surveillance video from the store, along with her testimony, showed she sold a pair of shoes to defendant Narkevious Reid. Other defendants appeared in the video, spending time in the store and talking to one another before leaving the store.

After Reid made his purchase, a man named Isaiah Brown comes into the store to buy shoes. In the video, he is standing at the register and keeps turning to look at the store’s entrance while speaking with Calhoun. As she goes into the back to get a pair of shoes in Brown’s size, he is seen by cameras having an encounter with some of the defendants, who walk toward him in the store before parting ways.

When Calhoun comes back to the counter, she speaks with Brown, he buys his shoes and then leaves. Soon after, Calhoun is seen walking to get a tool to help her close the store’s security gate, but suddenly running in an apparent rush to close the gate. She testified the sound of gunshots was what startled her — the shots were fired shortly after Brown left her store, and prosecutors would point out the defendants were seen on camera walking in Brown’s direction just before the shots were fired, then running away.

Defense attorneys sought to block Calhoun from testifying to what Brown said to her that prompted her to go and close the gate. Since Brown was not in court to testify to it himself, attorneys argued the testimony would be hearsay.

“The state has made a strategic decision to try this case without the cooperation of Isaiah Brown,” said Charles Grose, representing Shyheim Freeman.

Grose said Brown had a history of not cooperating in this case, including telling prosecutors and law enforcement that he doesn’t know anything about the case at all.

Eighth Circuit Solicitor David Stumbo opposed characterizing the situation as a “strategic decision,” saying there had been many efforts to get Brown to testify. He had been served a subpoena but hadn’t shown up for court. Judge Brooks Goldsmith issued a bench warrant for Brown earlier in the case, seeking his arrest for his failure to appear in court.

After hearing an informal version of Calhoun’s testimony, made without the jury present, Goldsmith ruled she could not testify to what Brown told her, saying it was inadmissible hearsay.

She gave her testimony to the jury, and they saw the surveillance video presented earlier to the court, along with video that showed defendant Isaiah Whatley running into the Foot Locker after the shots were fired. Calhoun said Whatley was a former employee of hers, and though he didn’t work at the store on the day of the shooting, she has hired him back since and he works there now.

A video clip showed Calhoun letting Whatley out of the mall through a back door, and she said he told her his mother was waiting for him in the parking lot.

“You don’t think he had anything to do with killing somebody, do you,” Stephen Geoly, Whatley’s attorney, asked Calhoun.

Attorney Carson Henderson, representing Shyheim Reed, asked Calhoun if she had recognized or identified his client, or co-defendants Shyheim Alston and Shyheim Freeman, to which Calhoun said no.

Michael Gambrell, attorney for Reid, asked Calhoun if she saw a gun on his client when he was buying his shoes. She didn’t see a gun, nor any bulges that could be a concealed weapon. She only heard the gunshots and didn’t see a gun or anyone shooting.

Elizabeth Able, representing Antonio Williams Jr., asked Calhoun about her client’s purchase — a pair of socks. Calhoun said she didn’t see any confrontation between anyone in her store, nor any fight.

The jury was dismissed until 9:30 a.m. today, but attorneys stayed until after dark to argue over what the state’s next witness, Greenwood police Lt. Mike Dixon, could testify about. Defense attorneys wanted to restrict his ability to offer any comment on videos Dixon reviewed as lead investigator in the case, arguing that he didn’t have firsthand knowledge of what happened at the mall.

The defense attorneys also moved to limit Dixon’s ability to identify the defendants in the videos, but their arguments were shot down when Goldsmith sided with the state on all issues related to Dixon’s testimony and denied motions to try each defendant separately.

Pandemic has set the number of air travelers back decades

Financial hits pile up for colleges as some fight to survive