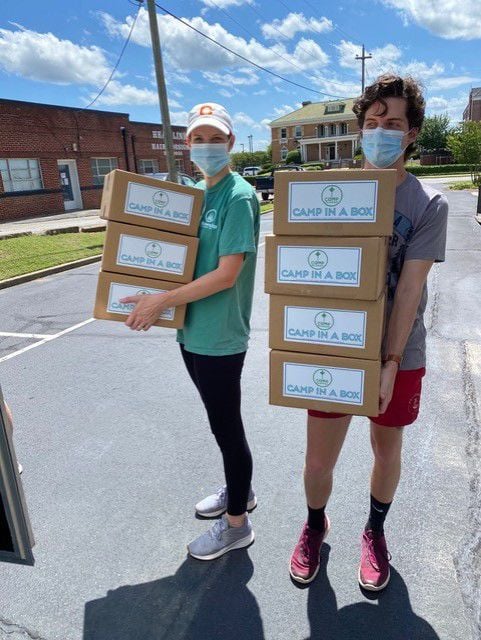 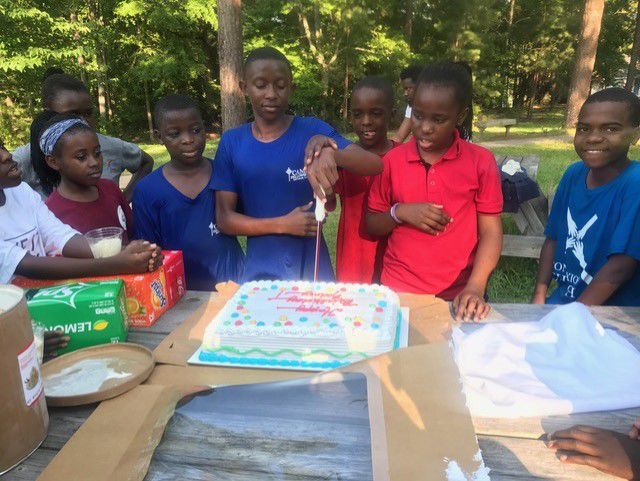 Several members of the Ugandan traveling youth choir Imani Milele celebrate a birthday. The choir has been sheltering in place at Fellowship Camp and Conference Center since March 17, when their performance tour dates were canceled amid the novel coronavirus pandemic.

Members of the Imani Milele traveling youth choir from Uganda sing at Fellowship Camp and Conference Center, while recording a concert for an online show. 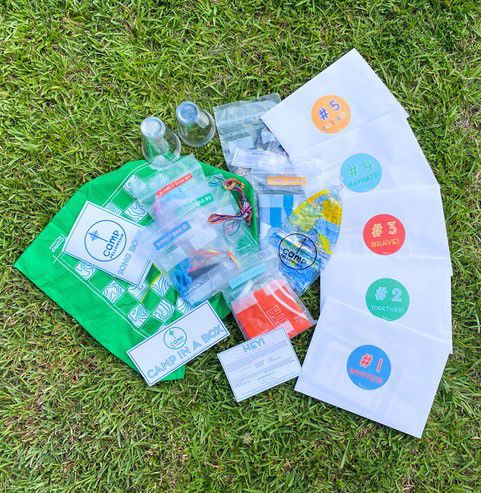 Camp in a Box from Fellowship Camp and Conference Center is designed with activities in mind for a camp family of four to do together, as a way to enjoy getting outside and support camp summer curriculum.

Several members of the Ugandan traveling youth choir Imani Milele celebrate a birthday. The choir has been sheltering in place at Fellowship Camp and Conference Center since March 17, when their performance tour dates were canceled amid the novel coronavirus pandemic.

Members of the Imani Milele traveling youth choir from Uganda sing at Fellowship Camp and Conference Center, while recording a concert for an online show.

Camp in a Box from Fellowship Camp and Conference Center is designed with activities in mind for a camp family of four to do together, as a way to enjoy getting outside and support camp summer curriculum.

Some camps are running this summer, but with guidelines to encourage social distancing and mask-wearing during the coronavirus pandemic. Others are opting for more virtual formats and some have decided to cancel.

According to the American Camp Association, state and local health authorities are responsible for establishing parameters under which camps are allowed to operate in-person this summer.

Kevin Cartee, executive director of Fellowship Camp and Conference Center in Waterloo, said he is an individual member of ACA and his camp is part of Presbyterian Church Camp and Conference Association, PCCCA. Cartee, his staff and the camp’s board made the difficult decision in April to suspend in-person residential camp this summer amid COVID-19.

But, Fellowship Camp has launched a Camp in a Box program and is establishing a faith-based “intentional Christian community” with six college students the camp already hired for summer, before the global pandemic upended plans.

Cartee said there “is no one-size-fits all” approach to how to host camp in these times and keep campers and staff safe.

The six college students are maintaining social distance but are able to have limited interaction with a Ugandan traveling youth choir that has been sheltering in place at Fellowship Camp and Conference Center since mid-March, when the pandemic resulted in cancellation of the choir’s performance and tour dates.

“Camp’s been here since 1948 and this is the first year we’ve not had camp, but we’ve tried to maintain all the good of camp,” Cartee said, noting the camp has 140 acres and Lake Greenwood access. “We are hoping recommended guidelines will put us in a strong position to welcome campers back, next summer. We’re already looking at changes to policies and procedures that will have to be made here as we move into fall.”

Cartee said the camp’s dining hall will have a reduced number of available table and chairs and further guidelines for sanitation protocols. Camp is in the process of installing additional sneeze guards in the dining hall. Total occupancy in lodging facilities will also be reduced. Adjustments will also be made to camp retreats for adults.

“One recommendation is to have smaller groups on site and to not allow those groups to interact,” Cartee said. “Other suggestions are things like cleaning life jackets and canoes in between each use, so that there’s no cross-contamination. Recommendations cover every aspect, from housing to food service to programs. I would encourage families considering camps to ask questions about what they have implemented and what requirements are there before campers even come on site.”

Fellowship Camp normally hosts some 350 campers in kindergarten through grade 12 during its summer season. Before the pandemic, staff had planned for seven weeks of summer camp programming.

The Imani Milele choir has been at the camp since March 17 and could remain through August.

“They hope to be able to go to Pennsylvania in August,” Cartee said. “We don’t know their options right now for returning home.”

Cartee commends the outpouring of support from Greenwood and Laurens county groups who have stepped up to help Fellowship Camp provide for the 21 children and 16 adults who are part of the traveling choir.

“The kids have continued with their schooling,” Cartee said. “They just had exams again July 3. They are continuing with worship services, which have been posted on the choir’s Facebook Live and YouTube. They look forward to doing a couple more concerts that way, over the next few months. They are working with handmade goods from Uganda they use as fundraising items. They are beginning an online store, to adapt their model for fundraising while they are here.

“They really enjoyed the Fourth of July fireworks on Lake Greenwood (Lights on the Lake),” he said. “During the fireworks, the choir actually started singing ‘America the Beautiful’. It was one of those magical kind of moments. In the midst of so much bitterness and discord, to hear those children burst into song really was a reminder about who we really are as Americans.”

“We’ve been delivering the boxes and our families are excited,” Kienker said. “We are part of a network, Presbyterian Church Camp and Conference Association, with member churches and camps in the U.S. and Canada. Camp in a Box developed through conversations with sister camps through regularly scheduled Zoom calls.”

Kienker said it’s difficult to fit camp activities such as archery in a box, but she has been able to fit inside a paper airplane activity, with a poster, through which campers can aim paper airplanes, as well as how-to instructions on making friendship bracelets and other items for campers.

“Staff are also doing videos to supplement some activities, which are designed for a family of four to do together,” Kienker said.

More on Fellowship Camp's Camp in a Box

What: Camp-in-a-Box is being sent to Fellowship Camp and Conference Center camp families who attended the Lake Greenwood-based camp's summer program in 2019.

How you can help: Individuals as well as churches and groups may purchase boxes for campers and friends.

Cost is: $50 per box. Each box includes activity guides, table talk cards, craft supplies and swag. Be on the lookout for additional online content. Find links for purchasing here: https://www.campfellowship.org/campbox

Additional activity packs, supply bags, and unique swag items will be available for individual purchase. Boxes are expected to ship in early June and throughout the summer as orders are made.

State health officials reported 1,110 new confirmed cases and one new probable case of the novel coronavirus on Sunday, along with 27 more confirmed deaths. An elderly Saluda County resident who died Wednesday was among the new deaths.

District 50, 51 teachers are eager to return to school and see students' faces again

Educators in Greenwood County school districts 50 and 51 are excited to return for a new school year, but they understand the trepidation people might have because of the ongoing COVID-19 pandemic.

Greenwood County added 38 new cases of COVID-19 on Saturday, the county's highest daily tally in more than two weeks. Despite the high daily case count, the seven-day new case average is still half of what it was 15 days ago.

Greenwood County School District 51 students will return to school on Aug. 27 and the 2020-21 school year will officially end June 4.

Hamilton wins British GP to close in on Schumacher's record

The Latest: Jaguars sign Adam Gotsis after 2 linemen opt out

With loan money gone, restaurants are at mercy of coronvirus

Ginsburg waited 4 months to say her cancer had returned

Clock is ticking on Trump comeback as early voting nears

GOP: Renomination of Trump to be held in private

Debate begins for who's first in line for COVID-19 vaccine