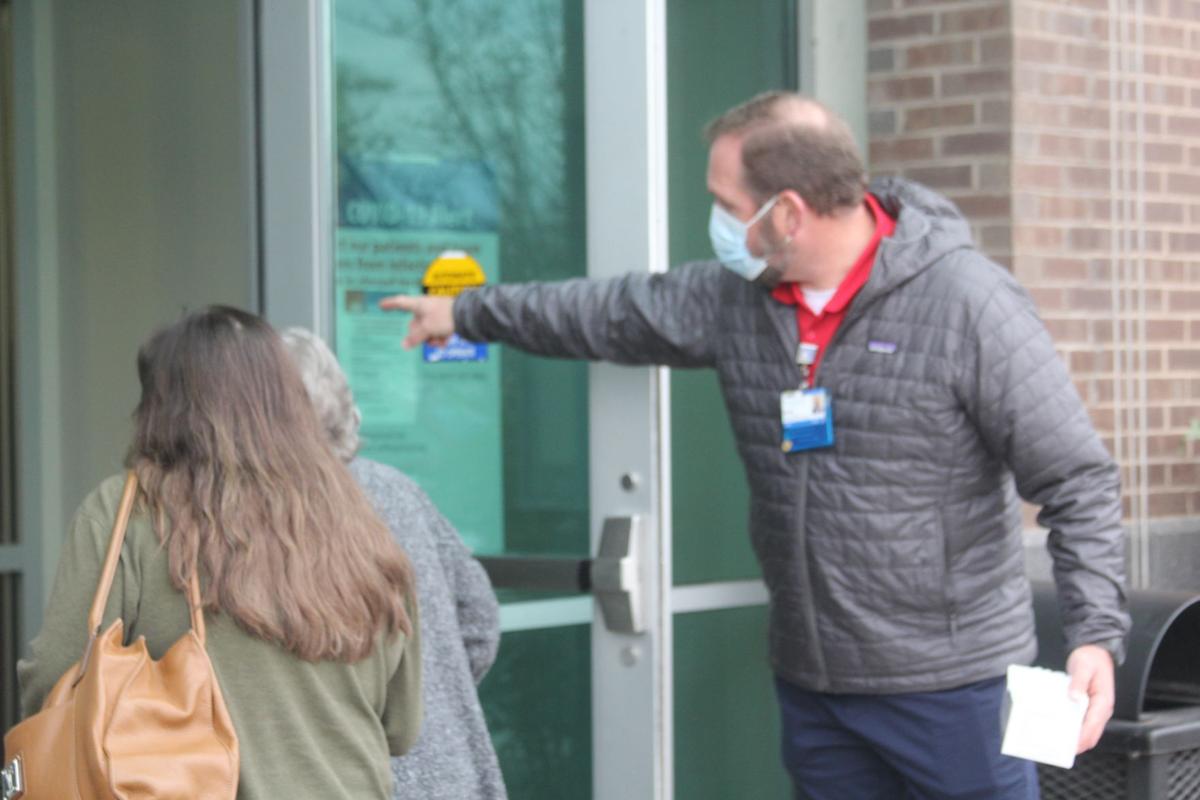 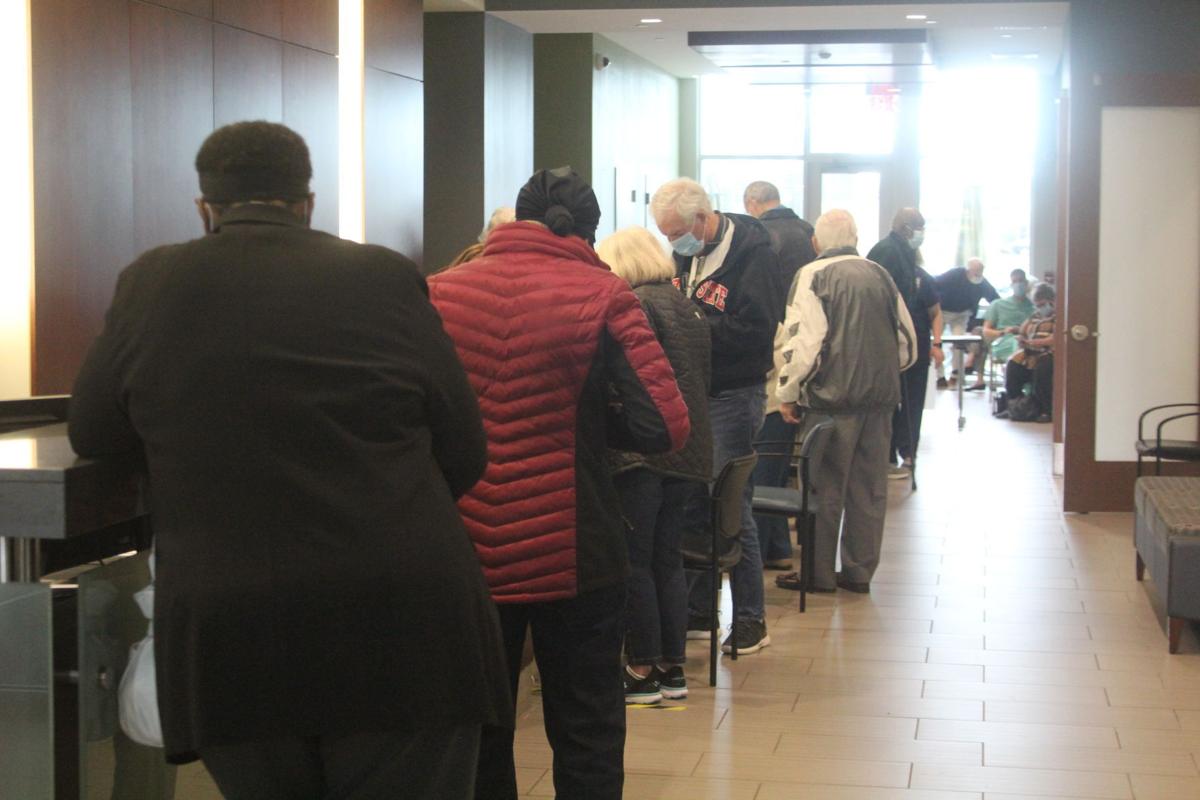 Every 15 minutes, a new wave of patients with appointments to get their COVID-19 vaccine arrive at Self’s Support Services Center to check in. 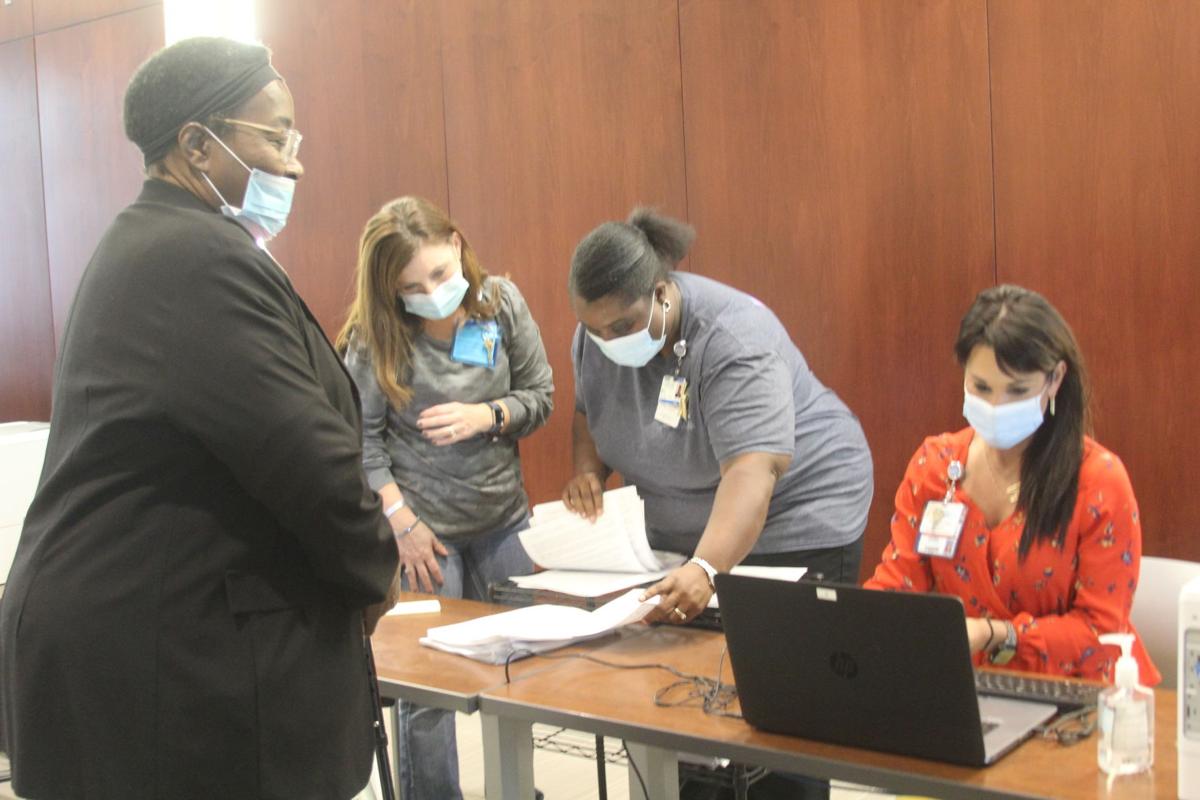 Patients arriving at their Self vaccine appointment check in and verify their identity with an ID check before going down the hall to get their shot, then wait 15 minutes under observation for any adverse reaction to the vaccine. 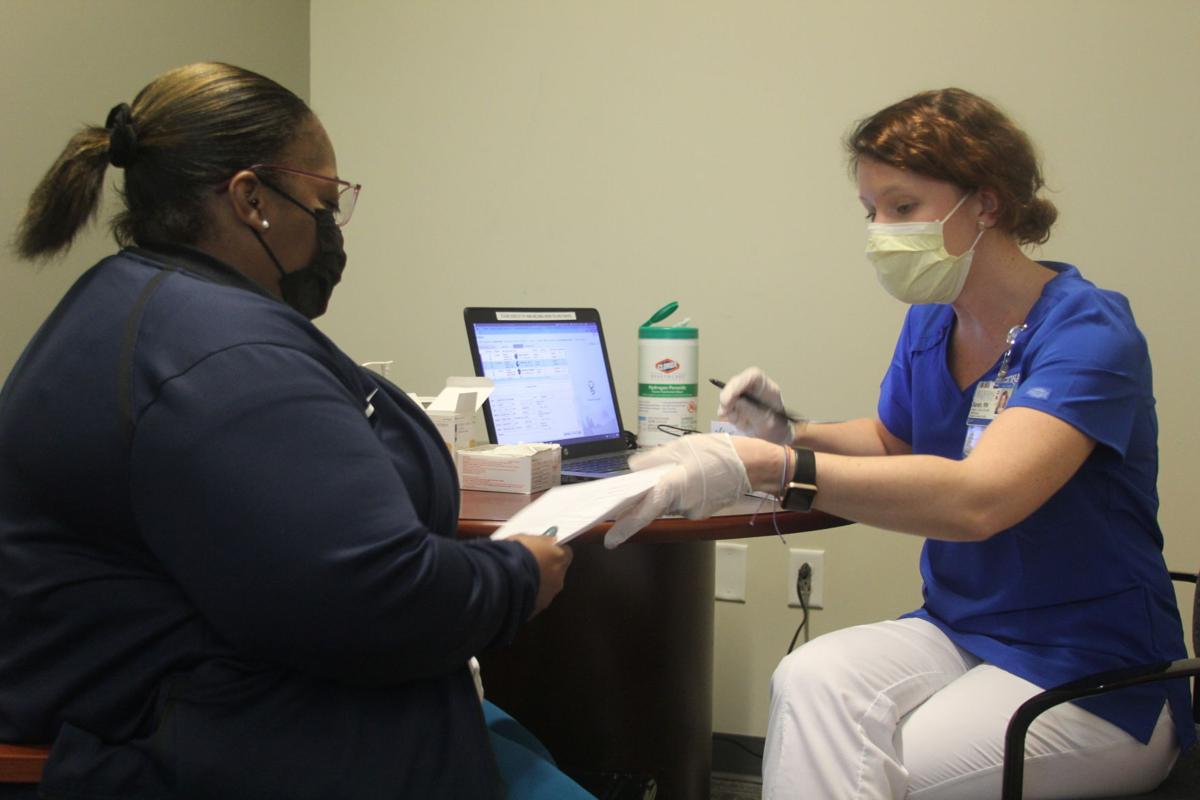 Cubicles, small offices and work spaces have been transformed from their usual use into spaces where nurses and technicians can administer the COVID-19 vaccine to people by appointment. 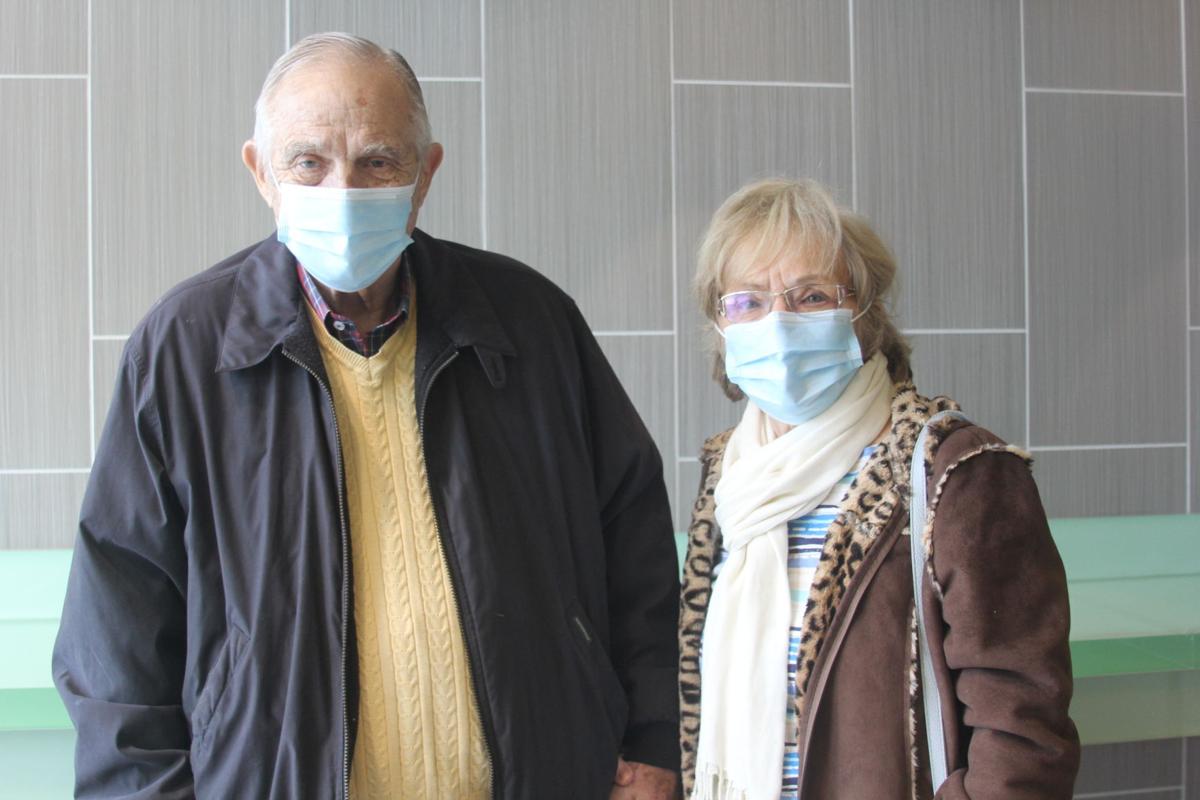 Gary and Marg Gunderson received their first dose of the COVID-19 vaccine Friday morning, and said the process with Self Regional Medical Center went smoothly and quickly the day of their appointment.

Every 15 minutes, a new wave of patients with appointments to get their COVID-19 vaccine arrive at Self’s Support Services Center to check in.

Patients arriving at their Self vaccine appointment check in and verify their identity with an ID check before going down the hall to get their shot, then wait 15 minutes under observation for any adverse reaction to the vaccine.

Cubicles, small offices and work spaces have been transformed from their usual use into spaces where nurses and technicians can administer the COVID-19 vaccine to people by appointment.

Gary and Marg Gunderson received their first dose of the COVID-19 vaccine Friday morning, and said the process with Self Regional Medical Center went smoothly and quickly the day of their appointment.

Offices and cubicles transform into a clinic as needed, and the crews behind Self Regional Healthcare’s vaccine clinic have turned a former business office into the hub of immunization against COVID-19.

Every 15 minutes, a new wave of patients comes from their cars in the parking lot to the front doors of Self’s Support Services Center on Wells Avenue. Andy Hartung is there Friday morning, guiding patients in and ensuring everyone has a clinical-grade mask on and providing one to those who don’t.

Hartung has worked for Self Regional for more than 16 years and serves as assistant vice president and chief information officer. He’s also taken on the role of organizing the hospital’s vaccine clinic.

“We’re able to flip the space we have right now every 15 minutes,” he said, standing outside the office as patients walked in. “The whole process, they’re in and out in 45 minutes, including 15 minute observation time.”

Self began vaccinating employees and frontline medical staff on Dec. 16, when they administered the first doses of the Pfizer-BioNTech vaccine made available in Greenwood. Since then, they set up a hotline open from 9 a.m. to noon on Thursdays for people to sign up for appointments as weekly vaccine shipments come in — the phone number is 864-725-3555. Recently, Self added an online request form at selfregional.org/covid-vaccine-request-form/.

Hartung said he and others are working to expand how many patients they can vaccinate in a day, alongside developing improvements to appointment scheduling. The 15-minute appointment blocks now, he said, avoid having lines of people standing outside the building and allow patients to wait in their cars prior to their appointment time.

Staff members have a list of the people who qualify for this first phase of the vaccine rollout, and Hartung said he and others have personally reached out to inform people of their need to arrange appointments.

“We ask for validation, and everybody has been, for the most part, compliant,” he said.

The staff is aware that some people have had trouble getting through on the phone line to set up appointments, and Hartung said they’re working to improve the scheduling process. On the other side of things, Critical Care Clinical Pharmacist Stephanie Smith is tasked with monitoring and managing Self’s supply of vaccines.

“It is a challenge to manage the inventory, but I think we’ve gotten it down to a science,” she said. “I think if anything, in this pandemic we’ve learned how to work together in a network.”

Self’s supply is determined by the state Department of Health and Environmental Control, which has been getting about 63,000 doses of vaccine a week from the federal government. In a media briefing Friday, DHEC Interim Director of Public Health Brannon Traxler said South Carolina’s health officials are working to improve the ways people connect with vaccine providers for an appointment.

As of Thursday’s data, South Carolina has received 424,950 doses of vaccine and administered 211,789 of them. Traxler said DHEC will be regularly sharing more data about vaccine administration starting next week, but that in the meantime South Carolina keeps requesting up to its limit for vaccine doses from the federal government. As production increases and other vaccines near the end of their clinical trials, Traxler said she’s hopeful hospitals will get more vaccines soon.

At Self, officials had trouble scheduling appointments using the federal Vaccine Administration Management System, Hartung said. Instead, they’re using the phone line, online form and actively calling patients to schedule appointments with them.

Organizing and coordinating a vaccine clinic to provide for tens of thousands of people across seven counties wasn’t in Hartung’s wheelhouse, but he said it’s a new challenge the staff at Self are excited to take on. Though he wakes up exhausted every morning, Hartung said he’s thrilled because he never thought he’d be doing work like this and seeing so many people benefit firsthand from the clinic.

“I work here because I want to take care of this seven-county region,” Hartung said. “Although it’s nothing I ever thought I would be doing, I have the ability to impact 500 to 800 people a day by giving them vaccines — and hopefully more. ... Just really being able to help people and take care of our community, that’s the whole reason I work here at Self.”

Once people go inside the clinic building, they’re checked in at the front desk and walk down to an office area. Cubicles have been converted into patient care spaces, where nurses and other staffers sit with the patient and go through a required checklist before administering the vaccine.

Then, the patient is asked to sit for 15 minutes in a waiting area to be observed for any adverse effects. So far, no one has reported serious side effects from the vaccine locally, and Traxler said across the state there have been no reports of anyone having an anaphylactic reaction to the vaccine. Most people experience a sore arm, some have chills and a short-lived, low-grade fever, but not everyone experiences side effects like those.

There were 10 stations vaccinating patients on Friday, but as of today, Self has 20 stations set up for staff to administer the vaccine, letting them handle more patients, quicker.

After the observation period, patients walk out through a side door. Gary and wife Marg Gunderson were there to get their first dose Friday and were out within 45 minutes. They saw an article in the Index-Journal about the phone line, but expected call volume to be overwhelming the first week.

“I didn’t even try to call then,” Marg said. “I called this week at 9 a.m. — I was the seventh caller. I had the phone ready before 9 a.m., with the number already dialed.”

Gary said though he had a number of friends who were unable to schedule appointments this week through the phone line, he said he’s hopeful that the coming weeks will see processes improve and soon supply of the vaccine will increase.

“I’m impressed with their operation here,” he said. “Very efficient, and well organized.”

Hospitals ready as state expands vaccine eligibility with phase 1b

More people will soon have access to COVID-19 vaccines after South Carolina enters phase 1b of its vaccination plan starting next Monday.

New cases continue to be well below what South Carolina saw during the winter surge and hospitalizations continue to drop.

Face coverings and annexation are the topics for tonight’s special called meeting of the Greenwood City Council.

Klopp won't allow players to travel if need to quarantine

Equestrian events called off in Europe after herpes outbreak