People anchor their boats and socialize at one of the sandbars on Lake Greenwood. 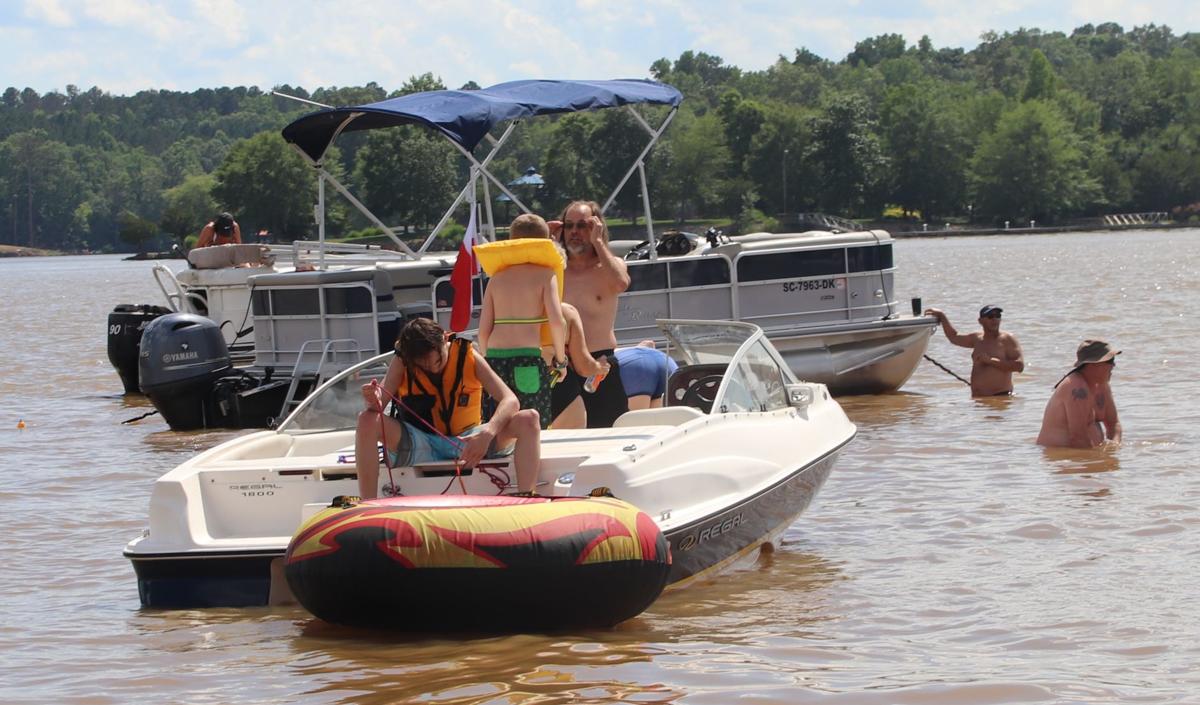 Boaters enjoy the nice weather at one of the sandbars on Lake Greenwood.

People anchor their boats and socialize at one of the sandbars on Lake Greenwood.

Boaters enjoy the nice weather at one of the sandbars on Lake Greenwood.

Lake Greenwood was abuzz with boating activity this past weekend.

On Saturday, Harris Landing Restaurant and the tiki bar were busy, and, just a little bit out in the water at one of the popular sandbars, dozens of boats were anchored and people were wading in the water and enjoying the nice weather.

No one was wearing a face mask amid the COVID-19 pandemic, and most of the people at the sandbar and the restaurant had strong opinions about what they think has been an overreaction to the virus.

“It’s all B.S.,” said Dave Migneault, a Simpsonville man who said he comes to boat at the lake every weekend. “More people die from the flu every year, and I don’t think it was right to close the economy. I think it’s got all political.”

Migneault, who said to call him “Local boater Dave,” said he hasn’t taken any major precautions during the pandemic.

“No face masks,” he said. “I’ve got hand sanitizer in the car that I barely use. I haven’t stopped eating out. In fact, I think my wife and I have eaten out more during COVID-19, ordering takeout, than at any time in my life. I’m trying to support local businesses.”

Migneault said you only have to look at the political map to see how the reaction has been to the pandemic.

“Where it was the blue and red states, all the blue states are refusing to open, and all the red states are open,” he said. “So, I definitely think it was to try to destroy Trump’s economy. When you have movie starts wishing on late-night TV that the economy would tank so Trump wouldn’t get reelected, we’ve got a problem in this country.”

Damian Sumerel, who works at JES Restaurant Equipment in Greenwood, said he wears a face mask at work, but said he thinks “everybody is overreacting.”

Scott Smith, of Greenwood, said he recognizes the virus is a problem, but that it’s not as big of a deal as it’s been portrayed.

“It’s a serious virus,” he said. “It’s a death sentence for nursing homes and people who have underlying conditions. If you’re healthy, I don’t think you have that much to worry about.

“Some of the rules that the governor is doing by executive order, I don’t really understand some of the things that he has done. We stand 6 feet apart in line at Walmart. OK. You want to close all the small businesses and let the big-box stores open. You’ve got 500 people in there, and we’re going to stand 6 feet apart?”

Back at Harris Landing Restaurant, Holley Prickett, from Clinton, said, “I think the media made it a lot bigger than what it was. As far as making us stop everything we are doing and not getting us back into work fast enough.”

Prickett said, “it’s not even worse than the regular flu, to me.”

“I think it spreads probably worse — a little bit, maybe — but I don’t think they are telling us everything,” she said.

Prickett said she thinks President Trump and Gov. Henry McMaster have done what was expected in relation to guidelines.

“I think the president is ready for us to get back to work,” she said. “I think he’s pushing to get us back there ready.”

Madison Barry, who also works at the restaurant, said she thinks many of the coronavirus guidelines are “extreme.”

“I think that a lot of people are scared,” she said. “Especially older people who are scared for their lives. I think that the guidelines we have to follow are good for the safety of customers, but are making life extremely hard. And people don’t understand how hard it is for us to follow them, so they think we’re just making their life harder for no reason.”

State health officials reported 2,239 new confirmed cases and seven new probable cases of the novel coronavirus on Saturday, along with 18 additional confirmed deaths and four new probable deaths. Among the deaths was the first child to die of COVID-19 in South Carolina.

In an attempt to stem transmission of COVID-19 among young adults in South Carolina, Gov. Henry McMaster ordered Friday that alcohol sales at bars and restaurants end after 11 p.m.

State health officials reported 1,725 new confirmed cases of the novel coronavirus on Friday as well as 26 additional confirmed deaths. There are 1,438 hospital beds occupied by patients who have either tested positive or are under investigation for COVID-19, and 177 of those patients are on…

As Greenwood County approaches 700 confirmed cases of the novel coronavirus since March, the first Index-Journal employee has tested positive for the fast-spreading respiratory virus.

Greenwood County School District 52 will be accommodating students who do not feel comfortable returning to school amid the COVID-19 pandemic by offering a remote virtual option for the fall semester.

A SC girl had birthday plans. Then her family got COVID-19.

The Latest: India IT hub Bangalore in lockdown as cases rise

The Latest: Pop keeping eye on Japan, and Olympic hopes

Atalanta shows off European credentials with draw at Juve

Even during pandemic beekeeping remains an essential service