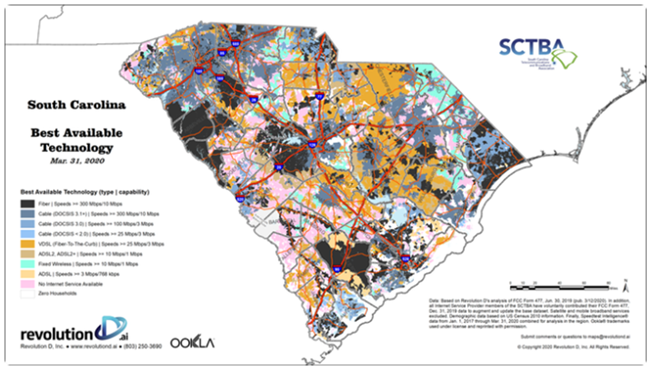 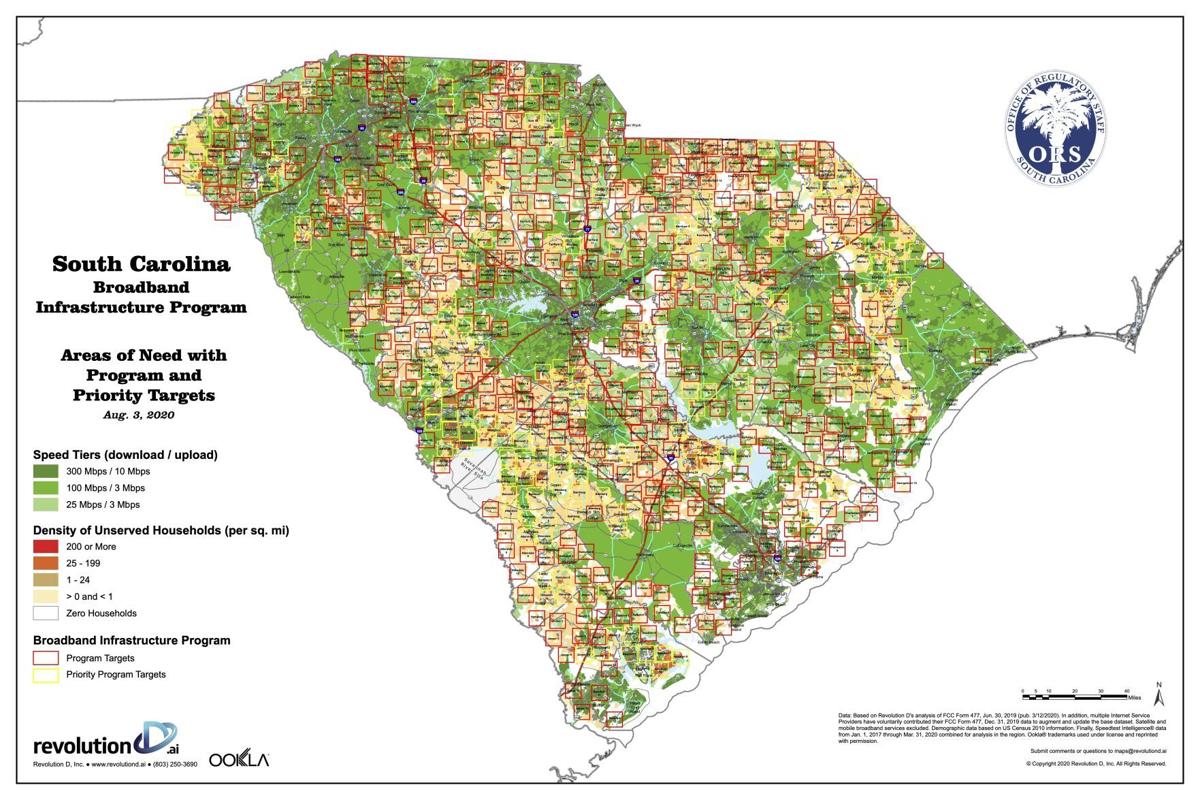 A map, created by Revolution D, shows the areas of need for broadband access in the state.

A map, created by Revolution D, shows the areas of need for broadband access in the state.

Connecting rural areas with broadband access has been on the state’s radar for years. Now, with the novel coronavirus pandemic reshaping daily life, the issue of rural broadband has moved to the forefront.

Sparsely populated areas have long lagged behind more urban areas for development, including access to broadband. In the Lakelands, those areas unserved or underserved for high-speed internet overlap the rural areas. With more students attending virtual classes and employees working from home because of the pandemic, this issue has become more critical.

The Broadband Accessibility Act or S. 1076 was introduced in February to allow electric cooperatives to get in the broadband market. This bill currently sits in the Senate Judiciary Committee.

In the House, Rep. Justin Bamberg introduced legislation in January that would allow local governments to own their own broadband internet service.

His plan is similar to what is advocated by the Municipal Association of South Carolina.

“We believe that local governments, be they cities or counties, ought to be allowed to provide broadband service,” Scott Slatton, director of advocacy and communications for the MASC, said.

Slatton said the law allows municipalities to install fiber optic internet but does not allow them to light it.

Rep. John McCravy said Thursday he has been passionate about rural broadband access for years.

“In my opinion, we need to give strong tax incentives to a lot of these cable and fiber companies,” McCravy said.

He said access to broadband is important for education, jobs and even economic development.

While bills that have passed at least one of the houses of the General Assembly are still in play, these bills will have to be refiled in the next legislative term. In the meantime, some hope for broadband access might come from the CARES Act.

In the first round of federal funding from the CARES Act, the state legislature allocated $50 million to the Office of Regulatory Staff to be used to assist COVID-19 affected individuals, families and communities.

“$20 million was budgeted for the ongoing Online Learning Initiative and $29.7 million was allocated to support broadband infrastructure expansion,” the agency said in a release.

WC Fiber, a subsidiary of WCTEL, was approved for $1,349,810 to expand broadband in Greenwood County. The company was also allocated $890,860 for its expansion in Laurens County.

Another company, Comporium, was approved for $1,135,470 in funds for expanding broadband in Saluda County. Comporium is headquartered in Rock Hill and provides services to a number of Midlands counties.

The Office of Regulatory Staff said it asked Revolution D Inc. to research where broadband access was needed most, and the company identified about 550 areas “as having substantial need for broadband improvement.”

Several areas in the Lakelands were identified as areas of need, including 11 in Greenwood County.

The City of McCormick area, parts of Saluda County, and some areas of Laurens County have been designated as priority program targets. The McCormick priority area contains 962 households that have been deemed as unserved.

Only 150 of 550 areas in the state were given priority status, which the agency based on demographic, socioeconomic and other attributes.

Internet service has evolved over the years from dial-up to DSL, cable and fiber. Although fiber optic services produce the highest speed internet, very few places in the state have access. While most would assume fiber can be found in the larger metropolitan areas of the state, a map produced by Revolution D tells a different story.

Cable internet is still the main source of internet in the Upstate areas of Greenville, Spartanburg and Anderson. Cable is also still strong in Florence, Orangeburg, Charleston and Columbia.

The map indicates fiber has a stronghold in much of Horry, Colleton, Abbeville and McCormick counties, as well as the areas around Lake Murry including most of Lexington and parts of Saluda and Newberry counties.

WC Fiber provides fiber optic internet for Abbeville and McCormick but is also making its way into Greenwood County.

“In Greenwood, we are doing a demand-based build out if there is enough interest in an area,” Shannon Sears, director of commercial operations at WCTEL, said.

“The demand is certainly there, so that’s not the issue,” Sears said. “The supply is the issue.”

Sears said being a cooperative helps with expanding fiber services. “Our model is we invest back into our network, we don’t have to pay shareholders,” Sears said.

McCravy said he was pleased to see the work WC Fiber was doing in expanding broadband services.

“I’ve got to hand it to WCTEL,” he said. “They are a great model for what we need to be doing around the state.”

In some rural areas in the Lakelands, access to broadband might be coming soon. Projects funded by CARES Act money must be completed no later than Dec. 18.

‘Match made in heaven’: Deion Sanders to coach Jackson State

Moving on after US Open default, Djokovic wins Italian Open

2020 Watch: Is this suddenly a new election?

On 75th anniversary of UN, its chief appeals for peace

US household wealth hits record even as economy struggles

For most NYC students, back to school but not the classroom

The Latest: Italian voters turn out in droves despite virus