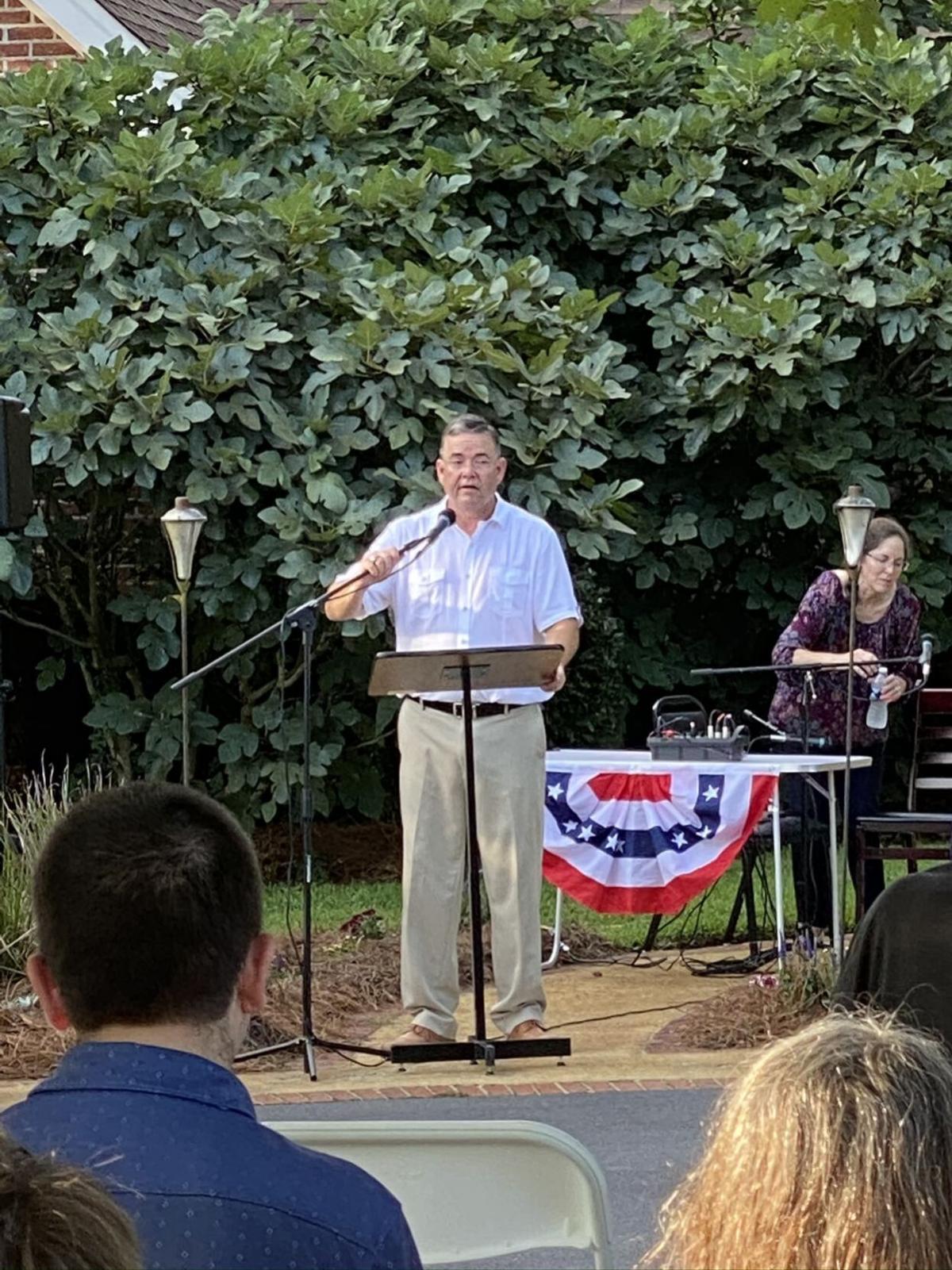 Rep. John McCravy speaks to a crowd of supporters gathered in his front yard for a campaign rally. 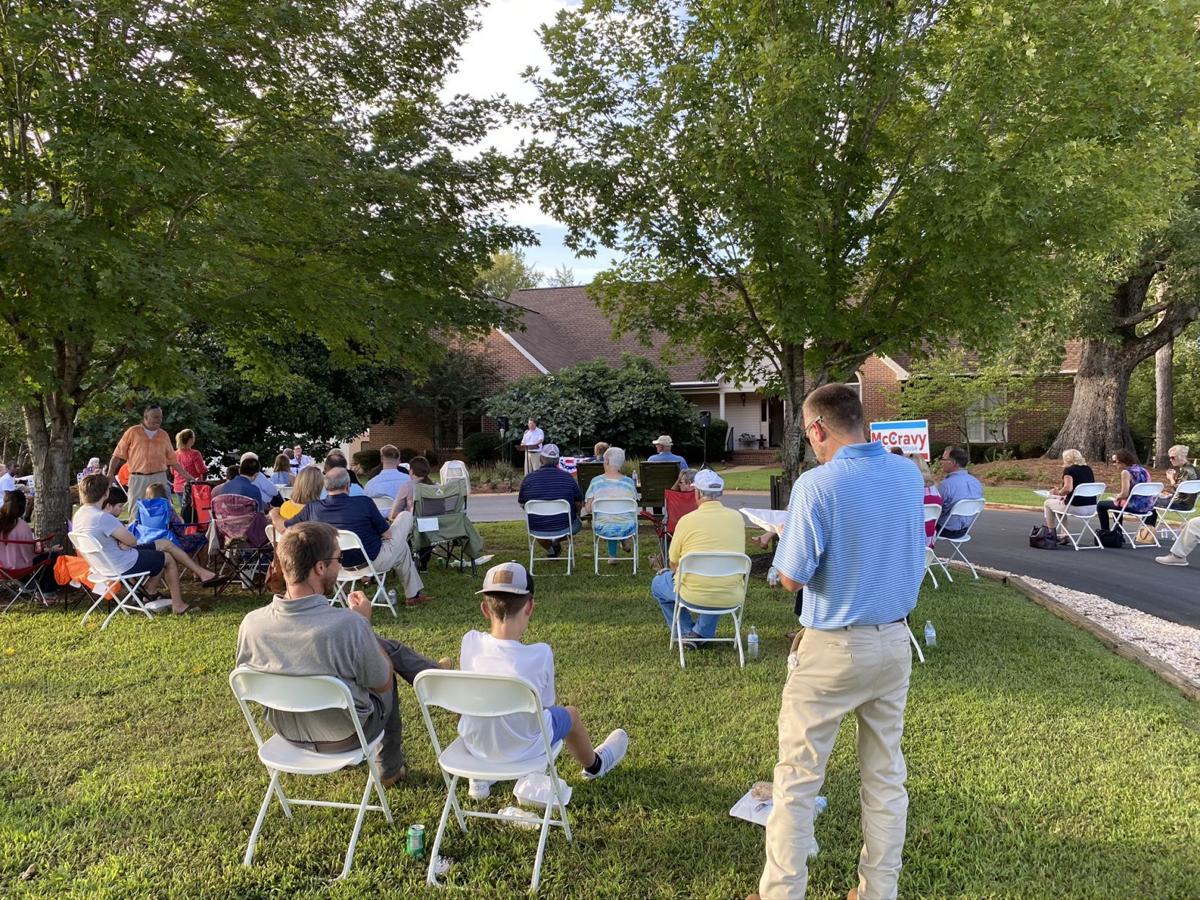 Supporters gathered in front of Rep. John McCravy’s house to listen to him speak while eating barbecue from Fat Daddy’s BBQ. 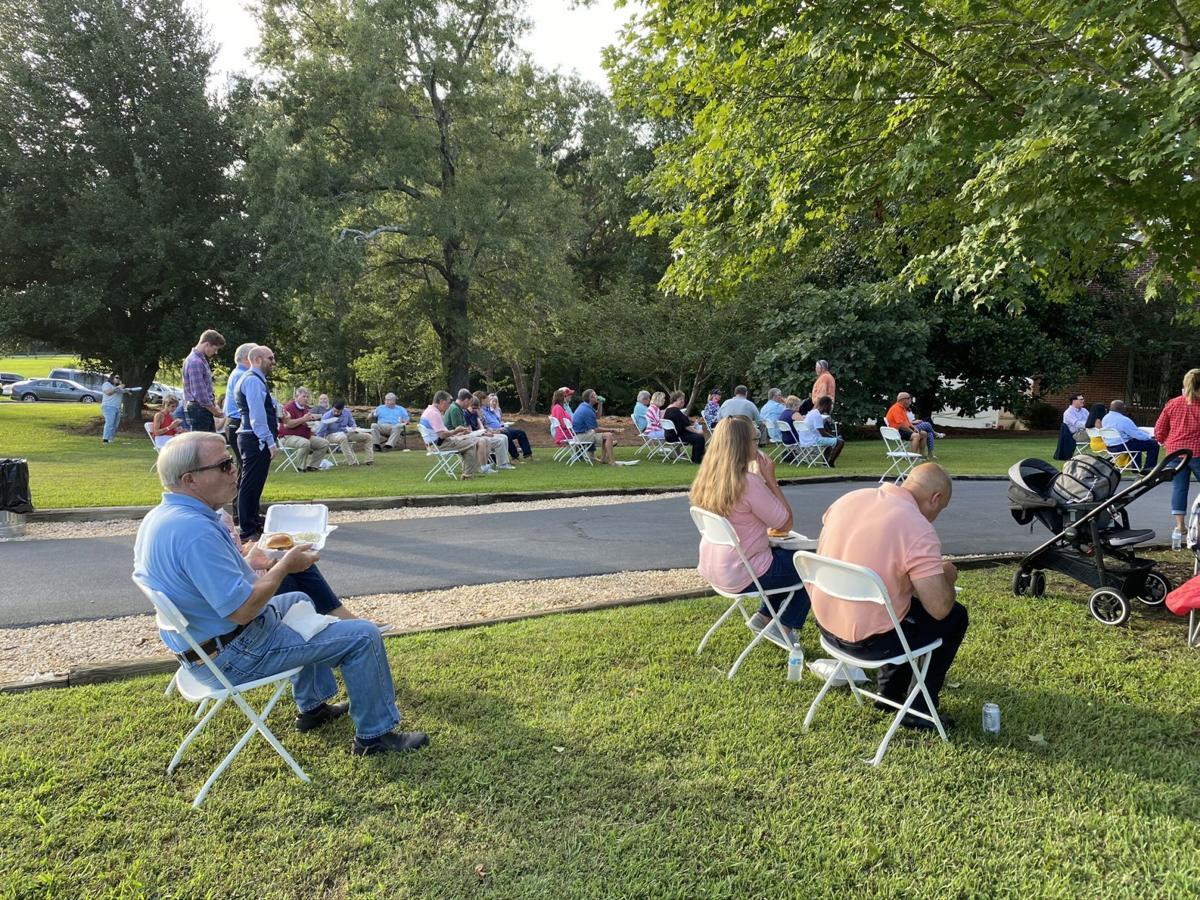 Supporters of Rep. John McCravy were distanced by group as families sat together while listening to McCravy speak. 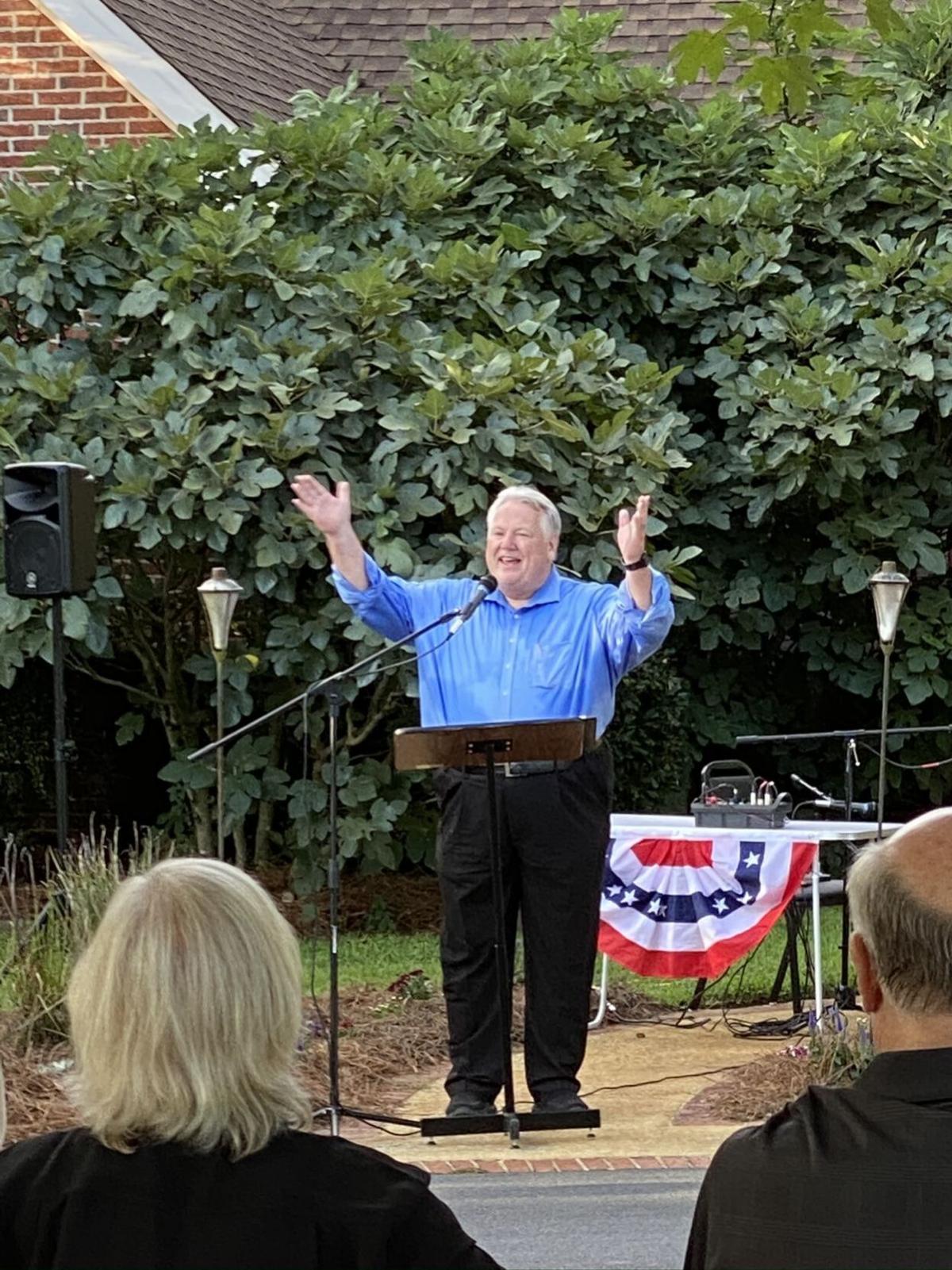 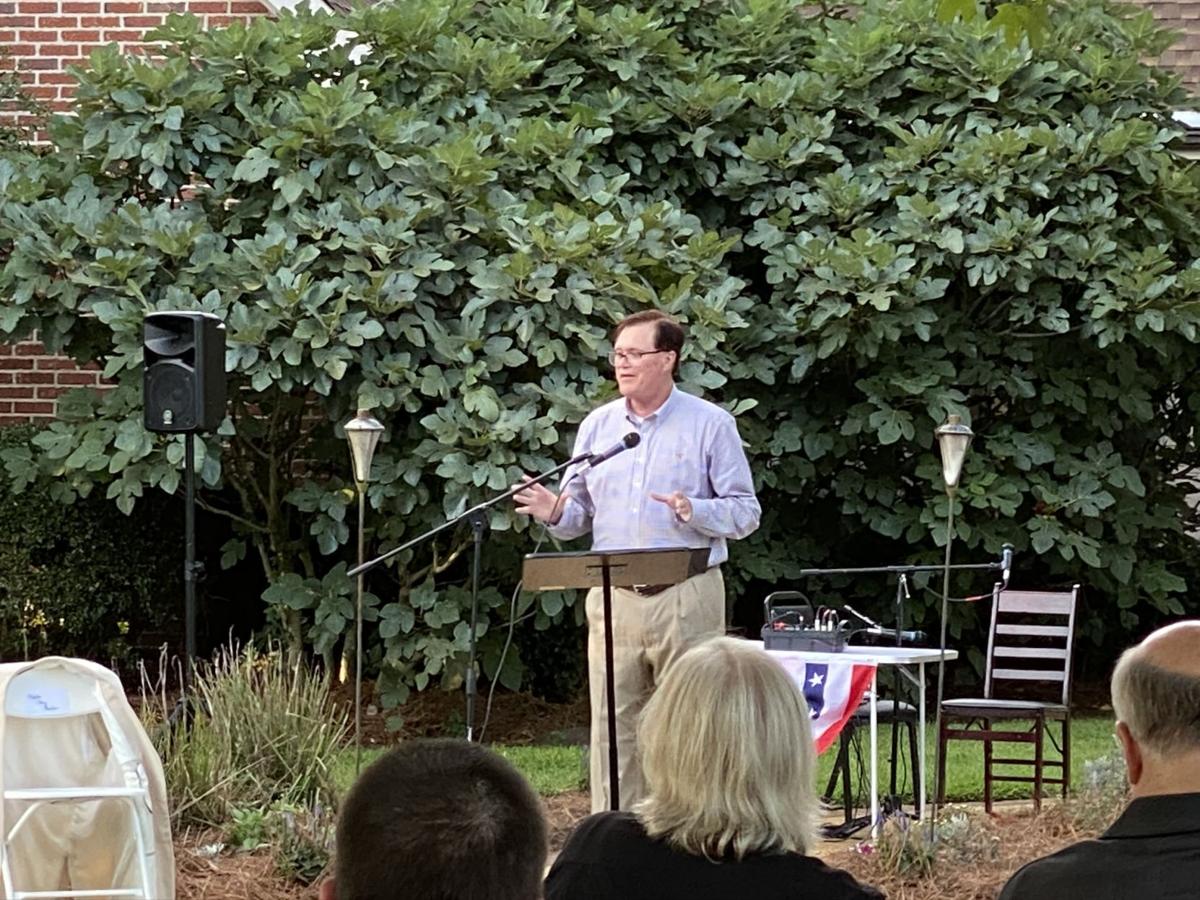 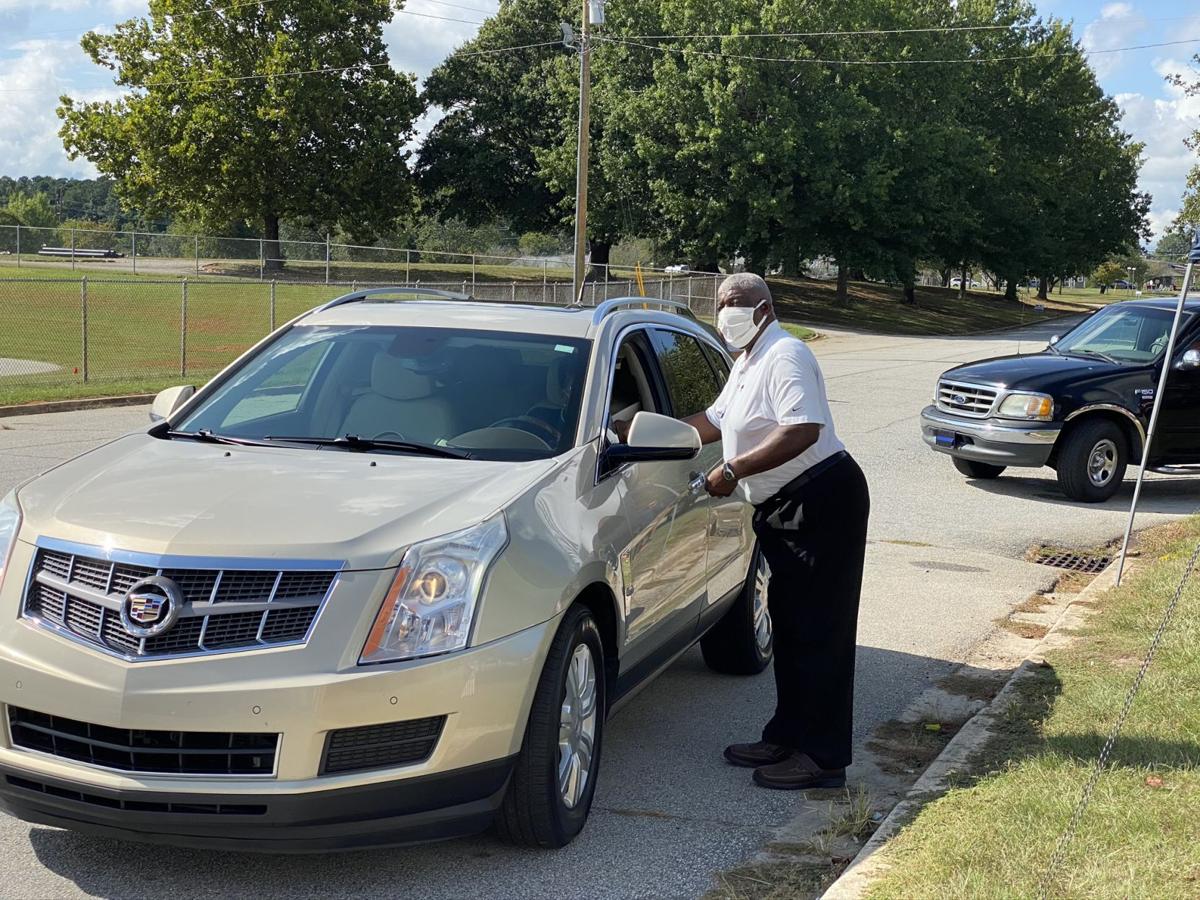 Sen. Floyd Nicholson greets drivers as they line up to get fish plates at his annual fish fry. 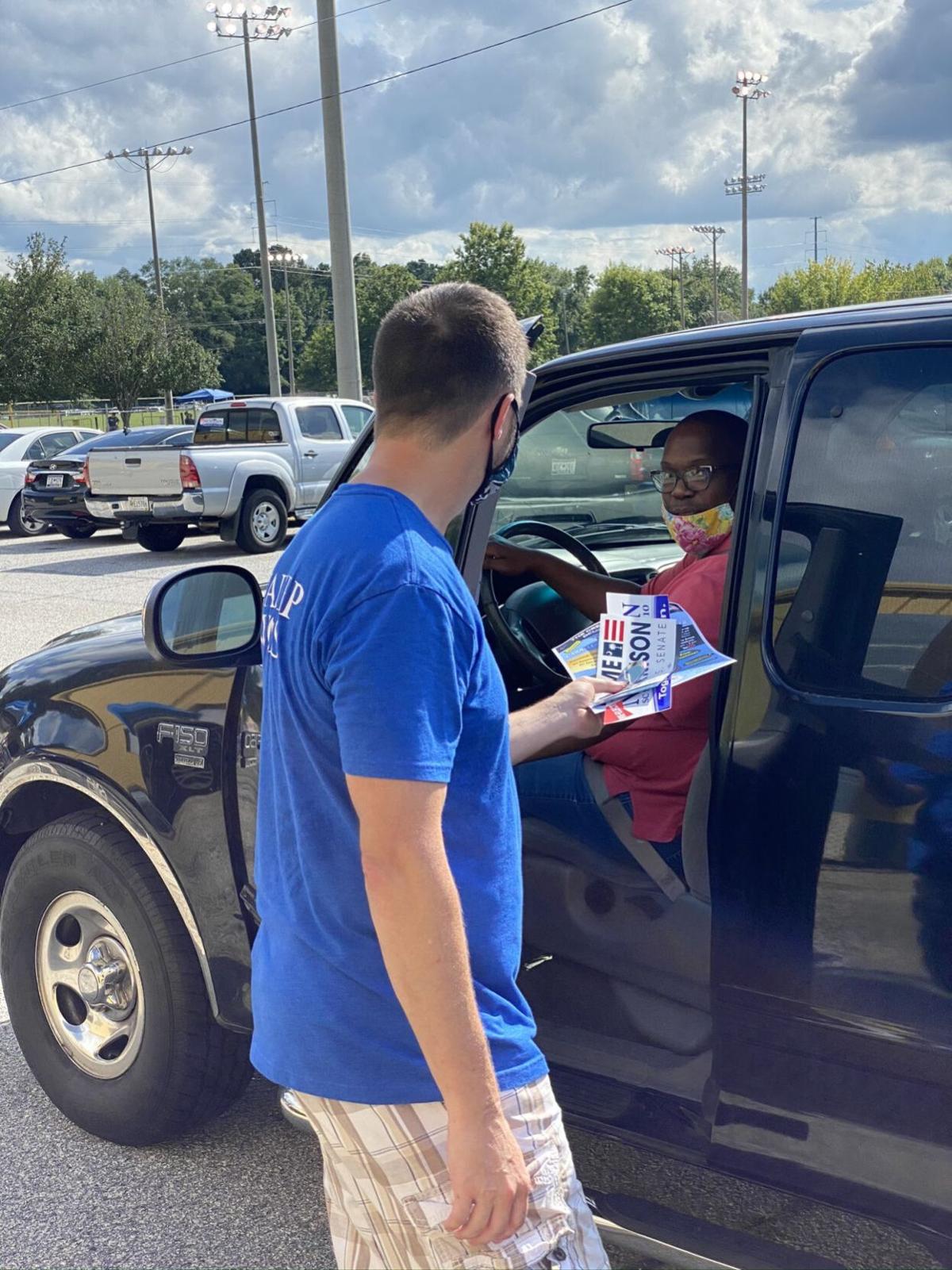 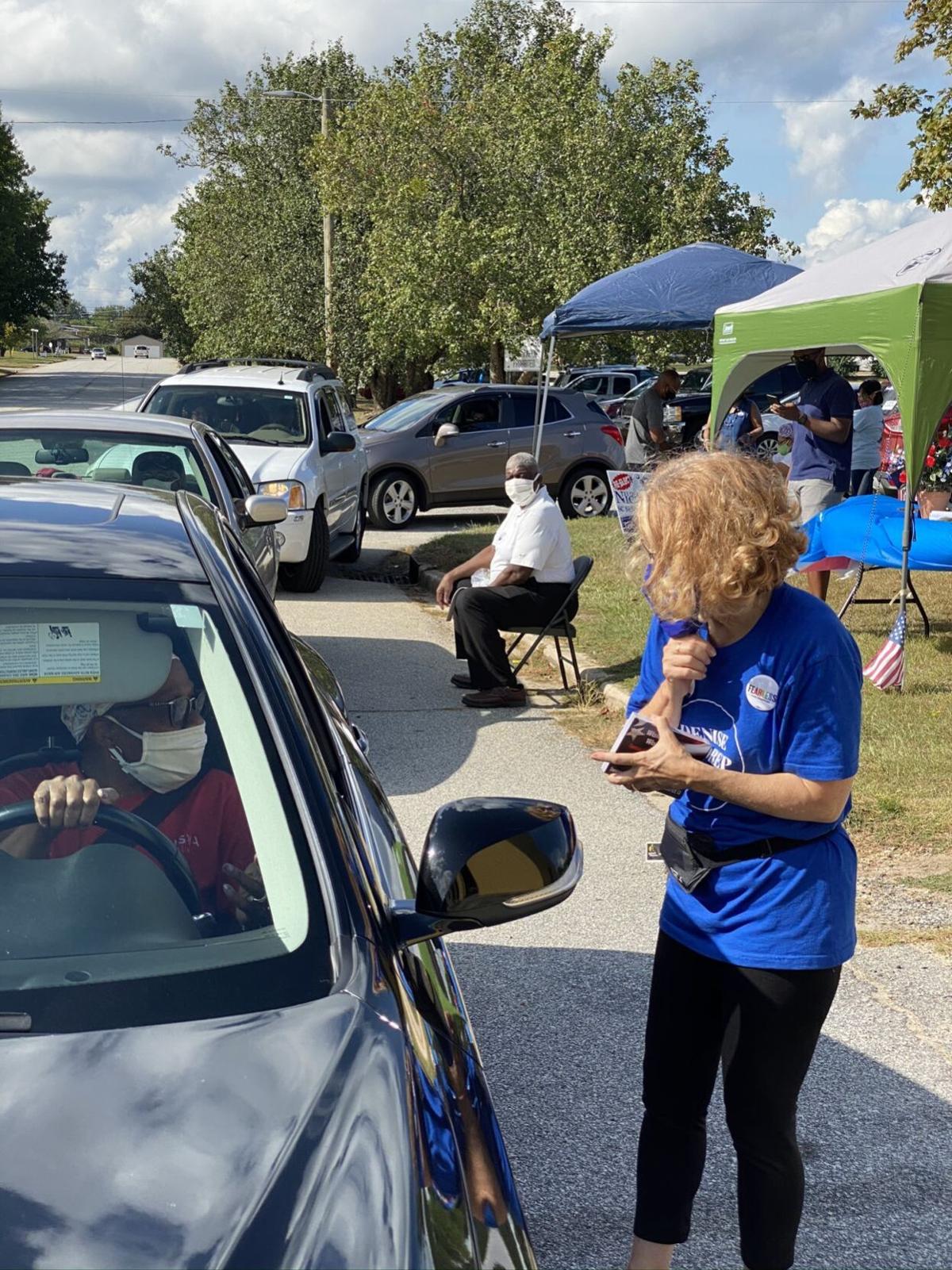 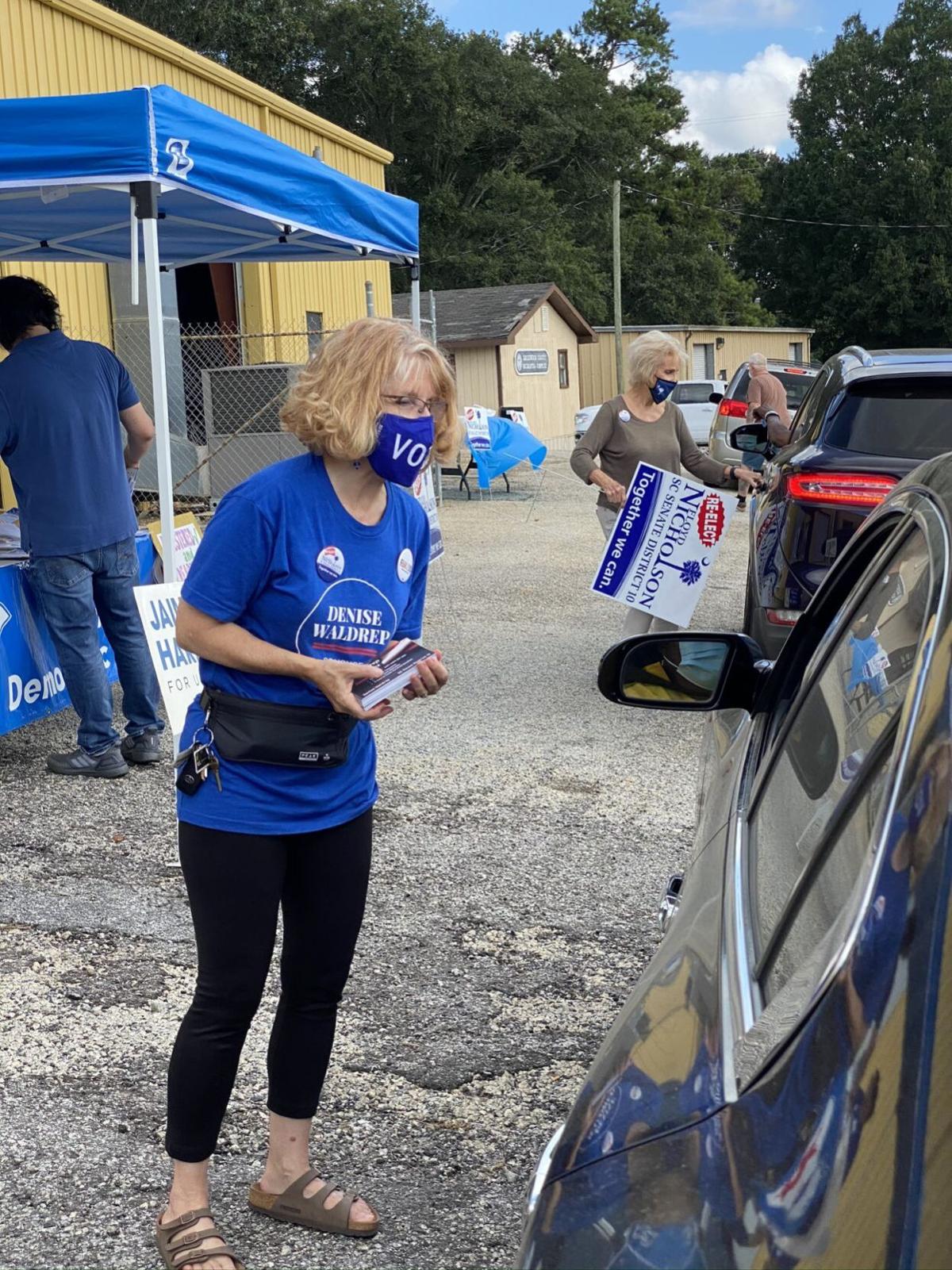 Denise Waldrep, candidate for SC House District 13, talks with drivers lined up to get plates at the fish fry. 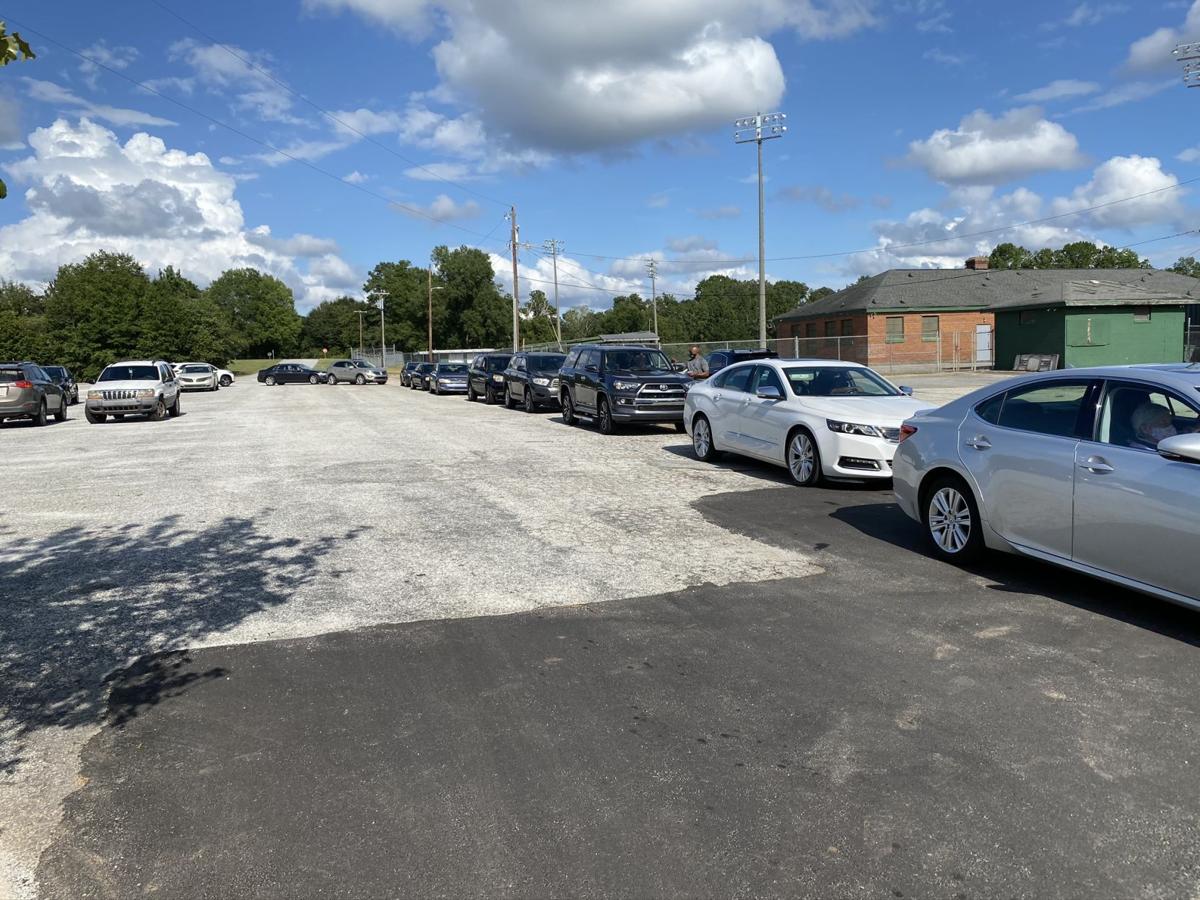 Rep. John McCravy speaks to a crowd of supporters gathered in his front yard for a campaign rally.

Supporters gathered in front of Rep. John McCravy’s house to listen to him speak while eating barbecue from Fat Daddy’s BBQ.

Supporters of Rep. John McCravy were distanced by group as families sat together while listening to McCravy speak.

Sen. Floyd Nicholson greets drivers as they line up to get fish plates at his annual fish fry.

Denise Waldrep, candidate for SC House District 13, talks with drivers lined up to get plates at the fish fry.

A September during an even-numbered year would normally be filled with campaign rallies, barbecues, door-to-door campaigning and meet and greets. The novel coronavirus has changed how some campaigns connect with voters.

Rep. John McCravy hosted a campaign rally Thursday that was mostly traditional in its experience. In front of his house in Hodges, McCravy invited campaign supporters and guests to eat barbecue, courtesy of Fat Daddy’s BBQ, and hear from speakers — and the Speaker.

Lucas was one of a number of speakers who spoke in support of McCravy. Pastor Tony Foster of Greenwood’s Restoration Worship Center also spoke about McCravy and how they met advocating for pro-life causes.

Billy Garrett, candidate for SC Senate Dist. 10 and a McCravy friend, spoke about his campaign. In fact, others speakers advocated for Garrett during their time at the mic as well.

Garrett will face Nicholson on Nov. 3 in what is likely to be a very close contest.

In 2016, Donald Trump won an average of 59% of the vote in Greenwood, Abbeville, Saluda and McCormick counties. District 10 resides in those counties.

While one barbecue was able to take place, another event was not so fortunate. Rep. Jeff Duncan, a Laurens Republican, was forced to postpone his Annual Faith and Freedom BBQ because of state and county restrictions, Allen Klump, spokesman for Duncan’s campaign, said.

“The Congressman has been attending smaller county level events and having more conversations over the phone or virtually that would have normally taken place in person,” Klump said.

Taking a much different approach, other campaigns have found different ways to connect with potential voters.

Saturday at the Greenwood County Farmers Market, Nicholson had a drive up fish fry.

Cars would drive up and pay at the first tent and then Nicholson would speak to them at the next tent. Further down, Kimler and Denise Waldrep, a candidate for SC House Dist. 13, were handing out campaign literature before cars continued to the final stop where the fish plates were handed off.

“We are trying to engage everyone,” Kimler said.

Since becoming the county’s Democratic party chairman in April, Kimler said he has tried to reach out and engage with party members and the public. The party holds a monthly Saturday morning breakfast which is conducted virtually and broadcast on the party’s Facebook page.

Similarly, Waldrep, who is running against incumbent Rep. John McCravy, has been conducting virtual town hall meetings which are broadcast on her campaign’s Facebook page.

Waldrep passed campaign cards to drivers as they made their way to get their fish plates.

“I’ve been a teacher for over 25 years,” Waldrep said to drivers as they passed by. “They need some more teachers in Columbia.”

While face-to-face meetings and meet and greet-style gatherings are traditional political staples, Waldrep said she isn’t going to risk it.

“I’m not going to put anybody’s health in danger for that,” Waldrep said.

Functional art takes on a whole new meaning with the latest art show by Burton Center for Disabilities and Special Needs.

The Latest: India on track to surpass US as worst-hit

Burnes, Braun help Brewers to 5-0 win over the Royals

The Latest: On holiday weekend, travel surges in Japan

Bettman: Next NHL season could start in December or January

Lawrence, No. 1 Clemson overwhelm The Citadel 49-0

Lawrence, No. 1 Clemson overwhelm The Citadel 49-0

How Ginsburg's death could reshape the presidential campaign