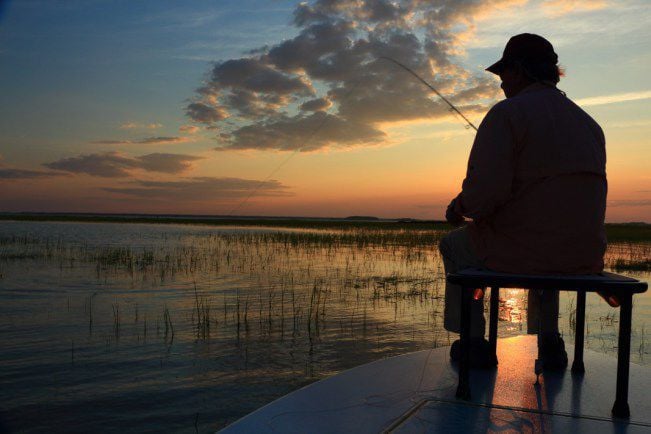 A man fishes for redfish from a shallow-water skiff on the Broad River in August. 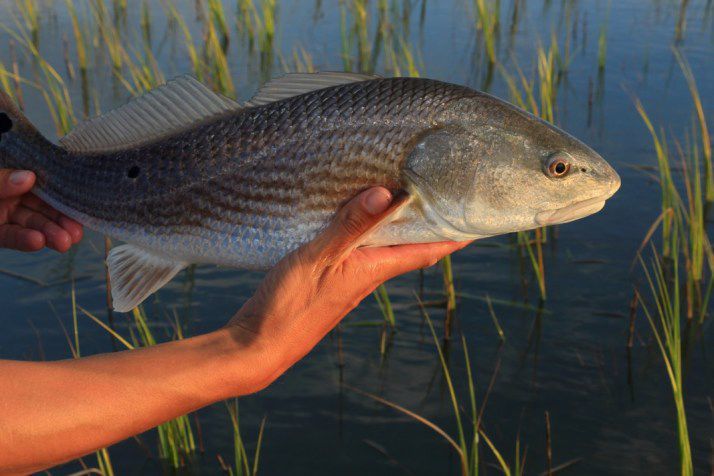 A man holds a redfish, which was caught on Broad River during an August fishing expedition.

A man fishes for redfish from a shallow-water skiff on the Broad River in August.

A man holds a redfish, which was caught on Broad River during an August fishing expedition.

Many years it’s been since I fished — 40 at least. The drought ended Aug. 22. Out onto Port Royal I went with Beaufort fishing guide, Capt. Tuck Scott, and Tony Royal of Baystreet Outfitters. Out we went in Scott’s Hells Bay Stealth, a shallow water skiff. We sought redfish, which go by various names: spot tail, red drum, channel bass and “red.”

The weather cooperated and we had the Broad River portion of Port Royal to ourselves. Like a water bug, we skimmed the chop to shallow areas where spartina thrust green reeds up. Here and there you seed heads tossed in the wind. Spartina’s detritus, you should know, forms the basis of the sea’s food chain. It’s no exaggeration to say we were in the sea’s nursery.

A unique tide situation that occurs twice a month gave us ideal conditions for seeking redfish along the edges of Spartina. We sought and found them in shallow water. Redfish love fiddler crabs, and you can spot their tails in the air as they tip over and suck fiddler crabs from their hiding places.

Tony Royal worked a fly rod baited with crabs, a preferred redfish food. Watching a fly rod in action is a thing of beauty, and while I didn’t fish myself, I photographed the outing for Shrimp, Collards & Grits Lifestyle magazine, of which I’m editor. I fished with a Canon.

Capt. Tuck spotted reds from his tower and gave Tony directions: “Cast at 11 o’clock. He’s moving right to left. Try again at 9 o’clock.” The directions worked, and reds struck the tiny crabs with force. Tony worked them in slowly, steering them clear of Spartina as best he could. Whatever we caught, we released.

The expedition brought back memories. I recalled fishing for bass in Granddaddy’s farm ponds in Georgia. I thought of my grandmother teaching me to bait a hook, and I recalled watching dragonflies perch on my red-and-white cork, a sign of good luck. Bites are sure to come your way. When I was a boy, fishing was about all I wanted to do, but then life turned serious, work assumed center stage, and I left fishing in my wake. Until my Port Royal expedition.

It felt good to be out in all that sunshine and salt air. The adventure did me good. More than that, the outing reminded me of just how artificial man’s world has become. Nothing’s fake about nature. Live or die, it’s as simple as that. As we fished, Tony, Capt. Tuck and I discussed how juvenile redfish stay in the sound and estuaries until they mature. To venture into the big water too soon means being cut to pieces by porpoises, which herd them into shallows and feast on them. Then we saw a mink on a rack of detritus. Flashing white and bright in its dark chocolate mouth was a doomed blue crab, dinner. It was too far away for my lens, but I got a shot nonetheless.

Port Royal deserves mention. North America’s earliest explorers, Spaniards, came through here. The absence of freshwater rivers allows Spartina to flourish here, and Beaufort County possesses half of all of South Carolina’s salt marshes. In the distance lay legendary Paris Island. Close by, Beaufort’s Marine Corps Air Station is home to five Marine Corps F/A-18 squadrons. Toward sundown, a sole fighter jet flew over, of which the air base says, “The noise you hear is the sound of freedom.” Outside of that jet, all we heard were the sounds of nature — wind, shorebird cries, and the watery explosions of feeding redfish.

As the sun sank, we headed back to the landing. We had released all fish but captured memories. It had been a good day and an especially good day to swap man’s propped up house of cards for nature’s brutal but beautiful world.

Champ Osaka, runner-up Kvitova into 3rd round in Australia

Akim Aliu, who spoke out about racism, signs with Czech team