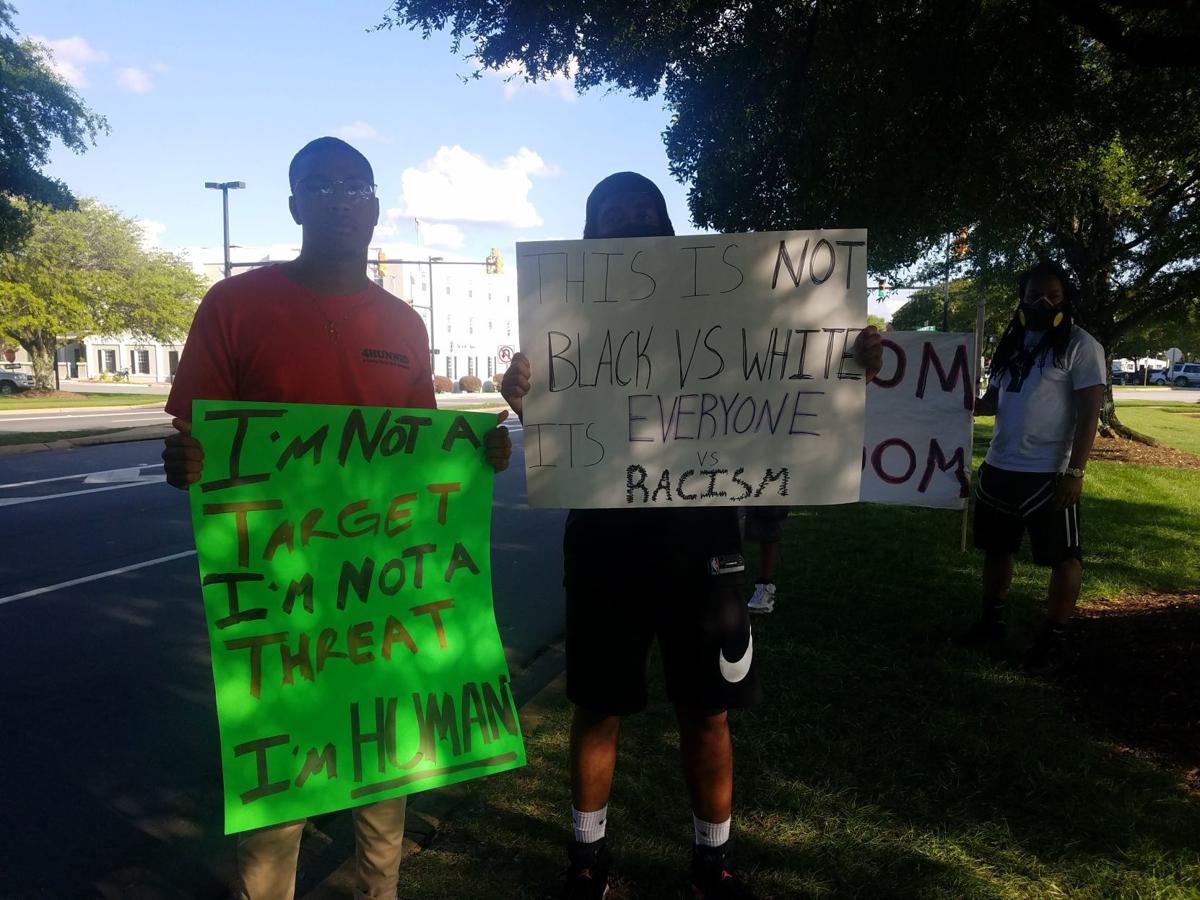 Cyrandon Williams, left, and Jaylon Key-Loft both said they were part of protests Monday in Greenwood because they didn't want to be the kind of people who ask for change but don't go out and protest for it. 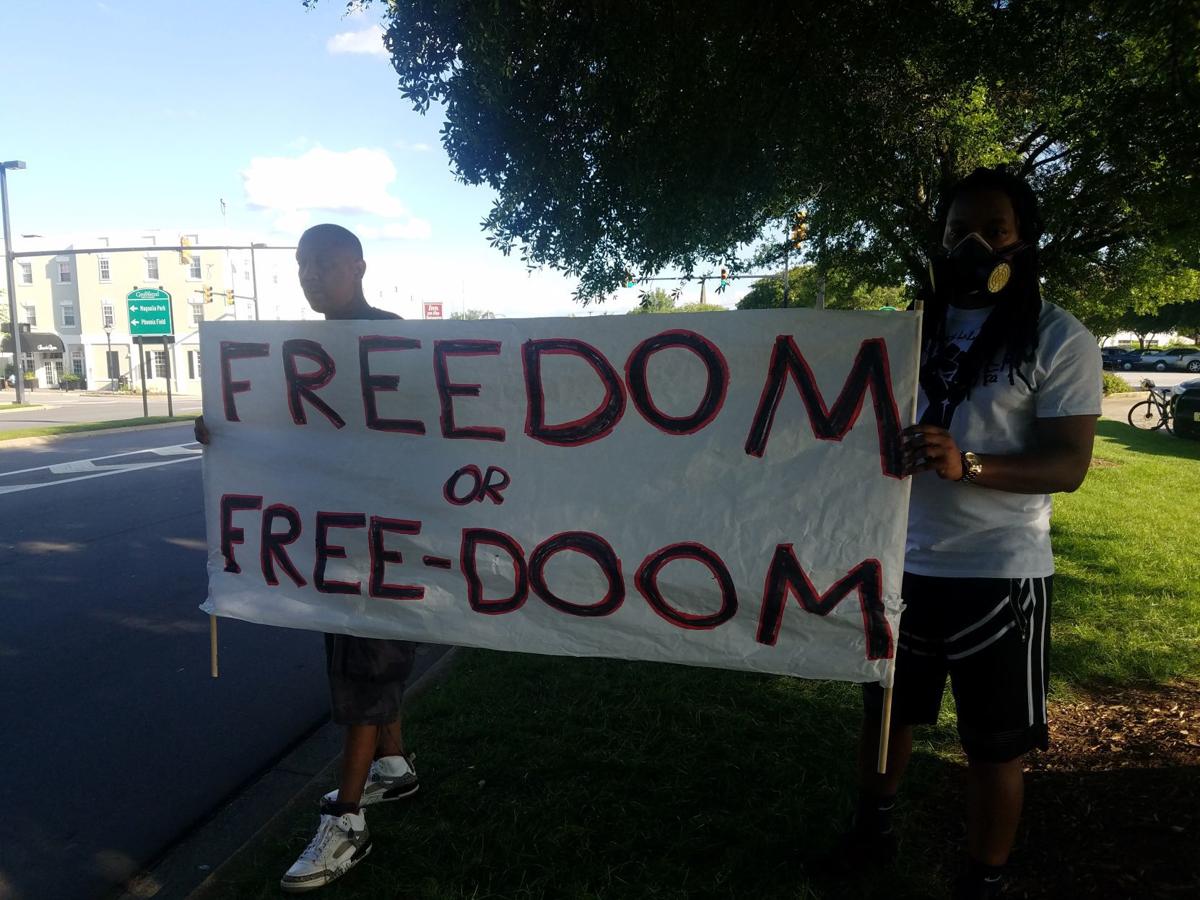 Banners and chants greeted drivers Monday who were headed through Uptown, as protesters in Greenwood joined a national movement to seek police reform and equal treatment for all races. 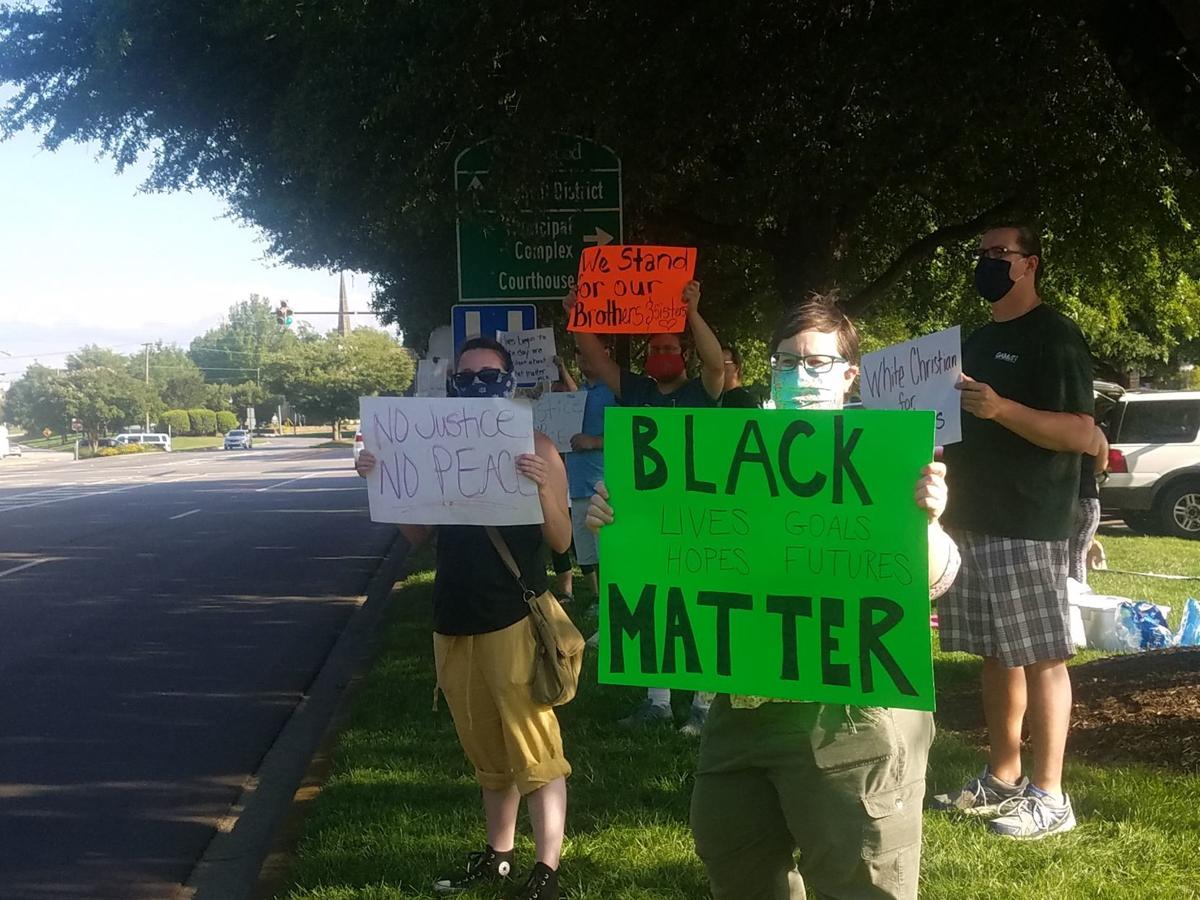 Cyrandon Williams, left, and Jaylon Key-Loft both said they were part of protests Monday in Greenwood because they didn't want to be the kind of people who ask for change but don't go out and protest for it.

Banners and chants greeted drivers Monday who were headed through Uptown, as protesters in Greenwood joined a national movement to seek police reform and equal treatment for all races.

“I can’t breathe” and “No justice, no peace” echoed through Uptown Monday afternoon, as protesters called for systemic change in light of protests across the nation seeking justice for George Floyd being killed by a Minneapolis police officer.

But the man helping organize these protesters made clear there’s problems in Greenwood that need addressing, too.

“This has been going on long enough,” Dee Harrison said. “I guess people are just ready to say it’s time for a change. It’s time to change America.”

Harrison said he helped bring some of the people out Monday to help fight injustice and have their voices heard. While he was inspired by protests elsewhere, he said the bulk of his drive was over the death of Willie Lee Quarles Sr., who was fatally shot in his residence by a Greenwood officer after police say he fired a shot at the officer.

As cars passed in Uptown, people waved banners bearing phrases like “Freedom or free-doom,” “I’m not a target, I’m not a threat, I’m human” and “This is not black vs white, it’s everyone vs racism.” That’s a message Harrison echoed, saying this isn’t about claiming white people are racist, it’s about fighting for justice and equal treatment under the law.

“There’s just so much injustice going on, we need a change,” said Cyrandon Williams. “It’s same old, same old — our ancestors protested for the same stuff.”

Williams said he’s been expressing his outrage and frustration on social media, but decided he needed to show his face and do his part in person to protest the injustice he’s seen. Beside him, Jaylon Key-Loft said he had been to Columbia to the protests on the State House steps, but came back because he wanted to ensure these voices were heard in Greenwood.

“I didn’t wanna be somebody saying I want change, but not doing nothing to make a difference,” he said. “And doing it the right way.”

Harrison said he was glad to see people of all background at the protest. Shana Southard-Dobbs, a white woman, said it’s time for white allies to stop being silent in the face of injustice against people of color. Something that could help immensely, she said, is if white people and families assessed and took stock of what white privilege means, then listened to the people of color around them and used that privilege to help amplify their voices.

Stephanie Livar said she came out to protest to make a safer world for her son, who is biracial.

“I’m scared to send my son out into this world if this world is going to continue the way it is,” she said. “We’re all the same. We all bleed red, we all have feelings, we all hurt. I just hope this coming together will open some eyes up.”

Protests are set to continue, with Black Lives Matter — Greenwood organizing one at 4 p.m. today at the fountain in Uptown. Black Lives Matter-Greenwood Co-founder Travis Greene said the protest was spurred on by the killings of Floyd and Ahmaud Arbery, but said there are also local issues people should be mad about, citing Quarles’ death.

He said the protest will reaffirm demands the group has made in the past: That the city establish a citizen review board so residents can have oversight in cases of police misconduct. Any and everyone supporting the national movement for fair policing is invited to come and support the preservation of life and police reform.

While the event was partially inspired by the growth of protest movements in other communities, he said he didn’t want to act and organize too quickly out of concern that tempers might flare too hot. Greene, who said he’s been active in other South Carolina protests over the weekend, said he wants a peaceful protest, and he wants people to have their voices heard.

“Black Lives Matter is the one that’s hosting this, and this is something that pertains predominantly to the black community, but I want people to understand that this affects the whole community,” he said.

On Monday, the state Attorney General’s office announced its work with state and local law enforcement agencies to respond to the risk of violence at protests. In the news release, state Attorney General Alan Wilson said he wants people to be able to protest peacefully and will do everything in his power to hold accountable the people turning peaceful protests violent.

“We should stand together in support of a citizen’s or community’s right to peacefully protest and voice their anger without fear of being caught up in violence instigated by others,” he said. “We should all stand in condemning the violent and destructive actions of those who are exploiting a tragedy to that they can justify vandalism, theft and absolute lawlessness.”

The Latest: India IT hub Bangalore in lockdown as cases rise